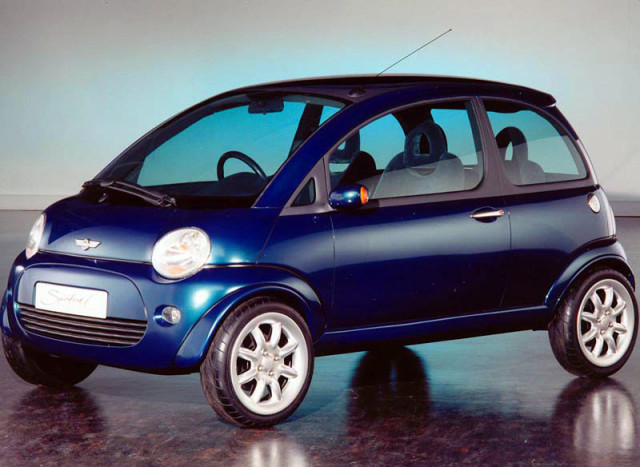 Given the launch of the new MINI and the recent pre-production shell that popped up on eBay, we’ve been digging into our archives a bit and thinking about how the modern MINI came about. Over the past ten years MotoringFile has written much about Mini, Rover and BMW in the 1990s but it’s such a good story it’s always worth a revisit. So with that in mind we wanted to go back and take look at the concepts from that time period that help guide us to the R50 which set the tone for all modern MINI’s to come.

The idea of a modern MINI had been floating around since the late 60’s. But the Mini’s appeal and subsequent sales success kept it in production for two decades longer than originally anticipated. However the various government backed companies that manufactured the Mini through the years were less than successful on the business side of things. In fact British Leyland, Rover, etc tried to kill the Mini more than once (first to avoid converting the engine to run on unleaded, then to avoid increasing safety requirements) but English public opinion was too negative. So when BMW bought Rover and the Mini there was quite a bit of hope for the future.

Here’s an excerpt from an account of this time period from Julian Rendell (taken from an article originally published in Autocar) that gives us a good overview of the design process and environment of the time:

Despite the proclamation of the BMW CEO, that Rover would be allowed to get on with the business of developing the R59 (as it was called in the early years), stylists in Germany were also busily working on styling proposals for the new car. From the original perception that BMW and Rover both wanted the same thing from their new baby, it became clear that Munich and Canley had wildly differing ideas on how it should look. Predictably, Rover wanted to produce a car to replace the Issigonis Mini which was created with the same sense of radicalism, and David Saddington, freshly promoted to the role of MG and Mini design director, following his successful work on the R3 was keen to follow in the footsteps of Issigonis. With that in mind, Saddington’s team worked on a 10-foot long, four-seater Mini.

Certainly David Woodhouse and Oliver Le Grice, another designer who worked on the 1993 project looked forward with relish the prospect of working on such an important project, but they were mindful of the fact that the new Mini needed to be either an economy car, a performance car or a fashion icon. To try and be all three in an all-new package was not, in their opinion, going to work.

BMW, on the other hand under Chris Bangle, were cooking up different ideas completely: Both in Munich and BMW’s California styling studios, a new Mini-Cooper was emerging. Chris Bangle stated that, “we thought it unfair to put the new Mini in the shadow of the old one”, which meant that his idea of a replacement would not be a 10-feet long cube, but a car that paid merely lip service to the original. BMW thinking, therefore, was that the new car should be the new Mini Cooper as opposed to the new Mini – and replacement in this form had a high profile proponent: Wolfgang Reitzle of the BMW Board.

Development of the Mini continued in Germany with this very much on the designers’ minds – and they asked themselves this question: If the Mini Cooper had been subjected to a continuous development programme through the years, like the Porsche 911, what would it look like today?

And that was the issue in its entirety: Rover wanted an economy car, whilst BMW wanted a small sporting car.

1995 was the crunch year for project R59 and in the summer of that year during a management ride and drive appraisal of the opposition, Rover showed their idea for the new Mini. Technically, it followed the predictable (and some would say correct) path of a K-Series engine, subframes and Hydragas suspension, but BMW in Munich were cooking up an alternative, which comprised of a Z-axle at the rear and McPherson struts up front.

As the year wore on and both teams continued development of their own versions of the Mini, it was becoming obvious that very soon BMW would have to ditch one of the design offices’ ideas and put their full weight behind the other. The date, where this decision would be made was the 15th October 1995, when Rover and BMW designers met up at the Heritage Motor Centre to present their rival full-scale proposals. Rover brought three cars to the shootout, it is unrecorded how many BMW brought along, although it is thought to have been between three and six.

Development on some of the Rover concepts had taken place independent of BMW which had created what would eventually become the E50 and then the R50 – the new MINI. Here’s another excerpt, this time from Graham Robson’s “New MINI” book, that gives us a slightly different angle of this time period:

“Even as early as 1994, designers on both sides of the channel dusted off their sketches of Mini-sized cars and started turning them into models, both scale and full size. Though neither knew that the other was running rival projects, Fave Saddington looked after MINI work at Gaydon, while Frank Stephenson (an American citizen with much experience at GM and Ford before he joined BMW in 1991) forged ahead in Munich. 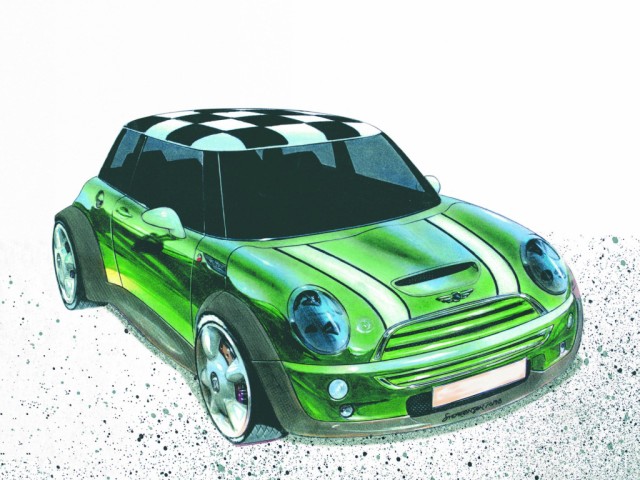 Even so, it was not until an absolutely seminal date – Tuesday, 17 October 1995 – that the two teams faced each other, when their respective offerings were shown to BMW’s directors at a presentation and viewing at a top-secret meeting in the BMIHT Heritage Centre at Gaydon.

Knowing that the integrity of the MINI brand had to be preserved at all costs, both teams – British and German – had thought in terms of evolution. After 1959 the Mini, as a style, had not advanced at all, so several ‘might have been’ re-generations had never taken place.

Both teams, therefore, tried to think along the same lines. What might have happened, how might it have happened, and what should a forth or fifth generation Mini look like? 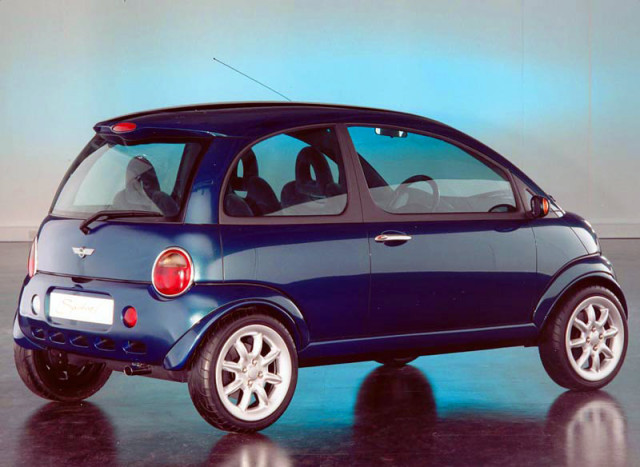 The two concepts that came out of the Rover side of the design team were the Spiritual and the Spiritual2 (seen here in dark blue). The two Spiritual concepts were much more a radical departure from the design that eventually won out. They tried to be as revolutionary in the 90’s as the Mini was in late 50’s. Designers tried to envision a future of more cars, more people, less space and more expensive fuel. In a sense they tried to push the same set of circumstances that led to the original Mini a bit further. In one of the more radical departures in terms of original Mini design the Spiritual was to have a flat three cylinder located under the rear seats driving the rear wheels.

Rover’s press release at the time called the Spiritual 2 “a full four-seat family car achieved in a package of just 3.1 metres [10 feet, the same as the original Mini and much shorter than the MINI]”, Interestingly even the press release that accompanied the prototypes at the time of release mentioned that they were never really meant to be the “new Mini”. They were meant to simply be “a free-thinking approach to the long-term challenges of a future generation.” Of course now we know that they were indeed proposals for the next Mini. In fact the Rover design team left that October 17th meeting with relatively high hopes that their design was to be chosen. Here’s another excerpt from Robson’s book: 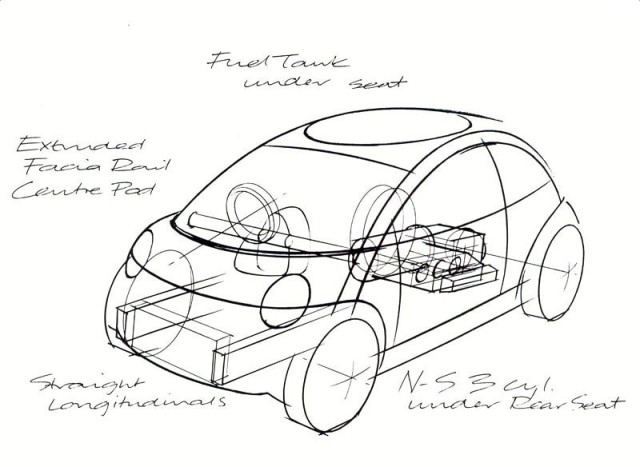 “Leaving the meeting with the impression that their offerings had been preferred over the massed ranks of MINI (BMW) offerings, they were soon cast down when it became clear that BMW’s designers thought that they, too, had been chosen to take their own projects a stage further. 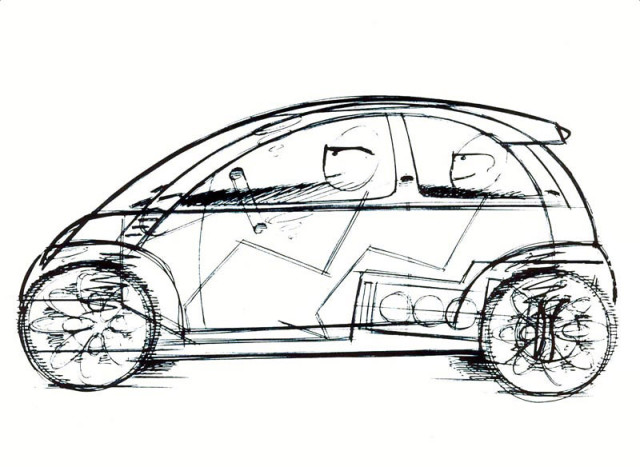 This meant, effectively, that the British designers then wasted much of the winter of 1995/1996 working on further refinements of the Spiritual concept. When Rover Group’s marketing staff realized that control of this project was slipping away from them, they were so distressed that they worked up, and issues, an internal document criticizing what the Munich studios were offering instead.

The German E50, they suggested, had been styled first, and packaged second, was not thought to be an ‘Issignois way’ of doing things, was thought to be ‘only better than average’, and that it” doesn’t truly shock with innovation”.

This of course is truly fascinating considering how successful the new MINI has become. While BMW may have designed the MINI backwards (shape first, engineering second) they did an amazing job with the execution of the final car. No one can argue with the success the new MINI has found in the last 3-4 years.

The ACV 30 on the other hand traded much of the Mini’s functionality for a more aggressive, rally inspired look. Obviously the market for such a vehicle probably wouldn’t have sustained it’s sales for very long. That being said the ACV 30 was a fully drivable prototype and debuted at the 1997 Monte Carlo Rally. I was going to school in England at the time and remember the ACV 30 being all over the papers for a day or two. It was quite exciting to see a reinterpretation of the then current Mini and I think many were just happy to see an English automaker looking to the future. However BMW was keen to let everyone know that this was not the new MINI that would be debuting later at the Frankfurt Auto show in the fall.

According to Robson’s “New Mini” the ACV 30 was created by the BMW design team and was presented as one of the five ideas at that fateful autumn meeting in 1995. Interestingly this Munich team was lead by none other than Adrian Van Hooydonk, who would go on to create the current 6 and 7 series and later become head of all BMW Group design overseeing BMW, Rolls Royce and MINI.

Of course the car that was ultimately chosen was Frank Stephenson’s design that we all know so well. 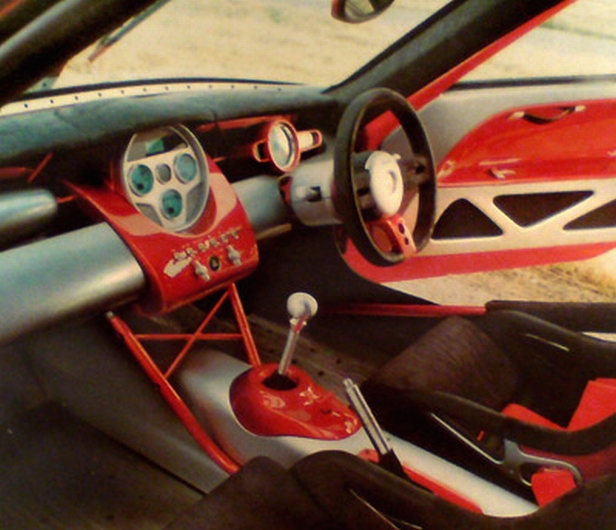 Looking at the ACV 30 and what would become the eventual new MINI, one can’t help but get the feeling that great minds think alike. The interior design clearly became a point of inspiration for the R50 and all MINI’s to follow.

When viewed with the benefit of time passed they certainly are interesting concepts. However, I think it’s fair to say none would have been as successful in today’s market as well as the current MINI.

It’s worth mentioning that, while this is meant to be a quick introduction into this topic, it’s certainly not the last word. Much more can be found in Graham Robson’s book “The New MINI” which is unfortunately now out of print but can be had used on Amazon.

The Truth About Active Sound