There’s blood, and then there’s your brother from another mother. Sometimes, the other mother gets remarried in Tennessee and when that happens, you go to a wedding. That’s what had me and my wife blasting down HWY 94 out of Chicago and into northwest Indiana this past summer. Our transportation was none other than the MotoringFile long-term loaner car, a MINI JCW Roadster. With the clock winding down on our year with this car, this trip was my last chance to spend some real, quality time with the Roadster. It was also an opportunity to put some highway miles on the car and see what it was like to live with a soft top on the freeway for 20 hours. Would the road noise drive us crazy? Would the southern heat keep us hiding under our cloth roof? Would this little black car and its black leather seats turn into a torture chamber in the parking lot? These were all pressing questions as we headed southeast toward a family reunion of sorts – my own personal episode of Justified.

MINIs are great road trip cars. MINI Takes The States proves this every couple years. Todd and DB from White Roof Radio took this very car cross-country only a year previous as part of MTTS 2012. Now it was my turn. Any MINI keeps the driving experience engaging, gets great highway mileage, and offers the kinds of driver/passenger comfort and entertainment that make road trips a blast. The MF Roadster was no exception. Yet because we had the option of the soft top, our road trip experience could take on another dimension. Top down, basically all of our city driving and stops for gas and meals let us experience the world around us, as well as the growl of that JCW power plant, first hand. Then on the freeway, the roof offered us just enough shelter to keep the A/C in, a surprising amount of road noise out, and to keep us dry when the rain came down.

For the ten hours we spent trekking from Chicago to Chattanooga, we got rained on for about half of them. Now I won’t pretend that we didn’t notice the rain noise on the Roadster’s single layer cloth roof, but I was surprised at how quiet the car still managed to be. In the dry, road noise was louder than your standard MINI Hardtop, but not so loud as to be distracting or drown out the audio system. In the rain, however, noise levels got a little worse, which is to be expected with the cloth roof. There were times when the rain got particularly hard where we had to simply abandon listening to any audio, but I’m not convinced it would have been any better in a hardtop MINI in rain that hard. For all the little bit of added noise took away from the interior experience, it also added to the overall experience of driving. For all its compromises, the Roadster always felt like a special car to drive.

There’s something remarkable about that soft top in combination with the Roadster’s tub-like, cocooning feel. The cockpit experience of a two-seat MINI gives a cozy feeling of one-ness with the car. Combined with the Roadster’s JCW-bred torque and engine character, driving this particular MINI got more fun the further south and into the Smoky Mountains we went. Charging up the mountains and around the corners, the Roadster ate up mile after Southern mile.

We arrived in Chattanooga to a setting sun and wet streets. Meeting up with friends and family for supper, we passed through a weekly motorcycle festival gathering on our way through town. As Gabe has said in previous updates, the JCW Roadster is not a car for the shy. People are going to talk to you. They’re going to ask you about it. They’re going to comment on the car whether you like it or not. If you’re top down, there’s nothing stoping them from engaging you directly, which as we burbled our way through the river district of Chattanooga, was exactly what happened. People on Harleys would ask what it was. Folks waiting for the bus would call out “Nice car!” A flip of the Roadster’s spoiler switch would get smiles and even applause. Yet it was all friendly. I never felt like I was getting the “douchebag” stink eye from anybody. For all its demands for attention, the MINI Roadster remains too approachable and unassuming to garner much ire, even in JCW trim and bright red racing stripes.

We were the hit of the wedding reception too, with people all but lining up for topless trips around the block in the black MINI soft top. With weather in the 90s, it was good roadster weather for sure. At least, as long as we were moving. I left the Roadster’s top up when parked for security reasons but also to keep all that black leather out of the direct sunlight. As warm as it got, the Roadster’s interior never got unbearably hot. That’s a key advantage of having such a small cabin. A quick pop of the top lets all that trapped hot air right out, then the air conditioning need only cool a very small area. At no point was the interior of the car storing more heat than the A/C could contend with.

While this wasn’t my first extended time with the MotoringFile Roadster, spending this extended time with the car helped bring it into sharper focus for me. There are so many things it does well. The suspension setup is comfortable, capable and for me anyway, the sweet spot between compliance and enthusiasm in a small car like the MINI. The Roadster’s semi-automatic top is extremely easy to use and live with. Pop the locking handle, give the roof a nudge, and it’s out of your way quickly. There’s nothing tedious about it and if that were a daily part of my driving routine, I wouldn’t expect it to get frustrating.

The interior touch points on our particular car are also very, very good. All the leather pieces — the dash, the seats, the wheel, etc. — give the car a real sense of substance and interior presence. Our JCW Roadster feels very, very nice inside. It has a truly premium feel to it, but given its sticker price, that’s appropriate. Being expensive is one thing, feeling premium isn’t always automatic.

Obviously, the driving dynamics of the Roadster are pure MINI. Both the Roadster and Coupe share a crosswise “H” brace behind the seats that stiffen the cars up near-as-makes-no-difference to the MINI Hardtop Hatch. I found only the slightest of rear view mirror shutter over rough roads. That’s good doings for any convertible. The result is a MINI that handles like it should — that feels light and planted and eager to just go and stop and turn and beg for more. It’s fun. That’s all there is to it. Fun.

The Roadster in particular is also well suited to road trip duty in terms of luggage space. The boot is cavernous by MINI standards and my wife and I had no trouble fitting all our luggage under the spoiler of the Roadster’s boot lid. The little utility shelf behind the seats in the Roadster’s cockpit came in especially useful as well. While obviously not as utilitarian as say the Clubman, at no point were we overflowing. The Roadster is also not the largest boot in the MINI lineup in terms of overall volume, but it might be one of the most useful in terms of making the most of the space it has.

I only had one real complaint for the Roadster over our 1,300 miles of road trip and that’s the built-in MINI navigation system. By traditional GPS system standards, the MINI system is actually very good, but smartphone app experiences from Google and Apple alike have made the experience of getting turn-by-turn directions so much better that this built-in system feels like an abacus by comparison.

I couldn’t search for a destination by name or location, but only by address, and that’s if the system could even find the address when I had it. Often it could not. We quickly turned to using our iPhones to find addresses for the places we wanted to go, then inputing those addresses into the MINI’s NAV system. Even then, the system’s failings were significant.

Turn-by-turn instructions were either far too early or too late at complicated junctures in the road. Worse still was the map, which offers none of the lane guidance of newer systems and doesn’t zoom in adequately to be of any real guidance in figuring out if you’re supposed to turn here or at the next opportunity. The visual clutter of the map didn’t help this either. Ironically, the much needed lane guidance and simple visual instructions would pop up on the screen when we were in other parts of the system, but were completely absent on the map where we actually wanted and needed them.

Call me spoiled, but the simplicity and intelligence of smartphone GPS apps has destroyed my patience for the MINI system and others like it. After so many wrong turns and failed addresses, we abandoned the system entirely not even half way through our first day and simply used our iOS devices. I’m really hoping that the BMW-bred next generation of this system is as good as Gabe says it is. Over time, I’m sure I’d get used to it over the course of weeks and months and get better results from it, but in this day and age, I shouldn’t have to. 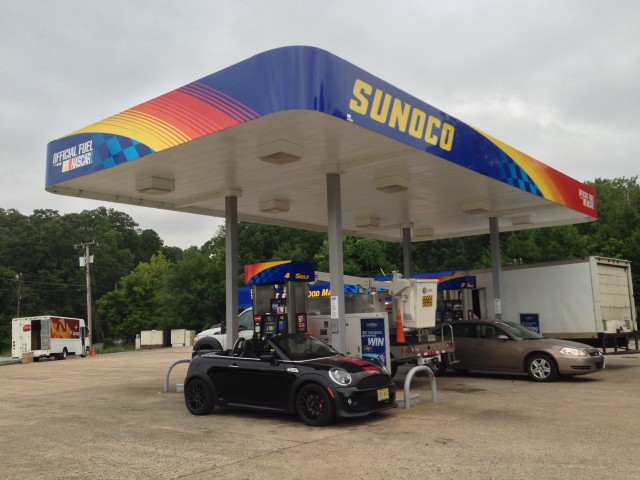 All that said, the poor experience of the NAV system is not even remotely enough to undo the charm of MINI Roadster. Our trip was delightful in many ways precisely because we took it in the Roadster. Sure, we would have had a great time in my 2006 MINI Cooper S as well, but the Roadster proved itself more comfortable, more visceral, and simply more fun for our journey. It was our chipper little travel companion and no MINI has ever tempted me away from my R53 as strongly and consistently as this JCW Roadster. It really is that good. Those 1,300 miles proved, for me anyway, that the Roadster really is a car you can live with every day. It’s perfect for the daily commute and if it’s just the two of you, it’s a great road trip chariot. It’s a great way to get your blood going.

MF Poll; Your Thoughts on the MINI Speedster

MF Poll: MINI Roadster vs MINI Coupe – Which Do you Prefer?