Editors note: Normally we don’t bring you BMW news from our sister site, BimmerFile. However the new BMW i8 represents the best of the BMW Group’s technology in one awe-inspiring vehicle. Vast utilization of carbon fiber, intelligent power management and beautiful design make the i8 one of the most important cars released this year and perhaps even this decade. Perhaps even more salient, at the heart of the i8’s drivetrain is MINI’s 1.5L three-cylinder engine (coupled with the familiar Asin 6 speed auto) delivering an astounding 230 hp. We think the application of that power train, along with the usage of carbon fiber (BMW is the first automaker to begin using CF for mass production) make this a particularly interesting car for MINI fans.

With the key fob in my hand, I raised the door and properly maneuvered over the carbon sill and into the low seat of the BMW i8. I glance at the controls, check the mirrors and press of the start button to begin a test drive I’ve been waiting seemingly forever for.

The first thing you notice is nothing. But the lack of noise is punctuated by a glowing display that has confirmed the i8’s readiness. Pulling back the lever and slotting it into the D the i8 responds with an electric idle that belies what this car hides beneath. 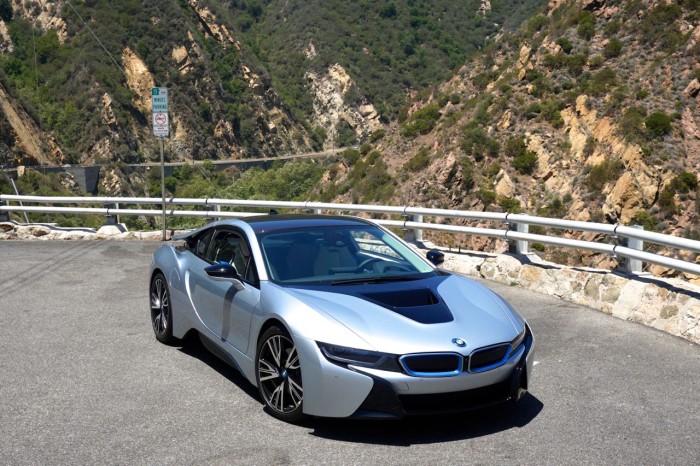 The i8 is the culmination of a massive shift in thinking at BMW. First shown as the Efficienct Dynamics Vision in 2009 at Frankfurt, the production i8 is a rolling example of where BMW’s future products will likely head and new way of thinking about the sports car.

But does it work? Clearly the styling does. In all my time driving I’ve never had more awed gazes and thumbs up than I did with the i8. People didn’t know what it was but they knew they loved it. Unlike a car like a Ferrari or Porsche which is often off-putting for many, I saw a positive visceral reaction from the young, old and all races and demographics. 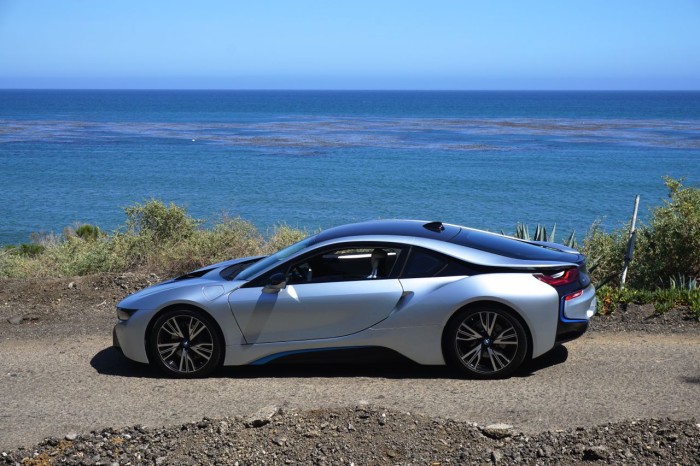 For BMW fans the i8 (and i3) represent a departure from the design language we’ve all seen evolve for years. The i8 features an almost invisible Hoffmiester Kink (yes it’s still there if you look hard) and Frozen Blue accents on many color-ways.

The shape itself is as much dictated by function than anything. There are no faux vents or spoilers anywhere. Reportedly designers look at the shape of a drop of water for inspiration in getting the drag co-efficient down to .26. That study also dictated the shape of the car with the unique rear flaps that help to greatly reduce lift without introducing drag.

Function dictated form on the side as well with a large gap just before the rear wheels that acts a ram-air intake. According to BMW it helps to squeeze a bit more power out of the tiny 1.5L three cylinder. 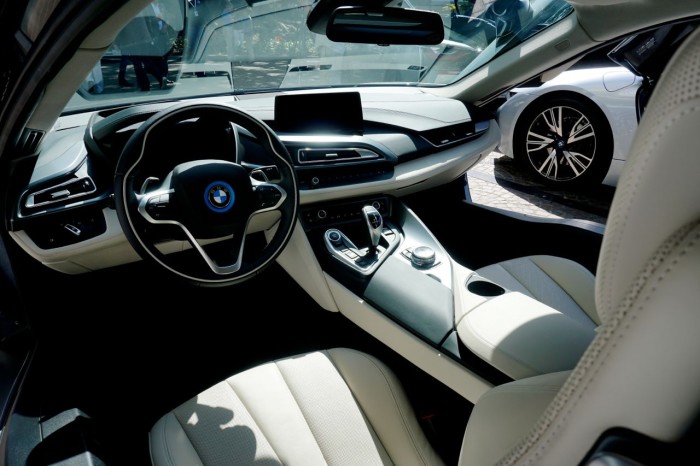 Inside things are a bit more restrained with relatively common BMW switch-gear and beautiful if not vaguely familiar design language. The materials are similar to those found in the i3 but with far more liberal use of leather (responsibly dyed with olive tree extract naturally).

Space upfront is plentiful with controls and pedals well laid-out. The rear seats on the other hand do a great impression of 911 rear seats in their size and design. In other words great for small children or luggage.

Overall the build quality was exceptional and on par with BMW’s other high-end offerings. But it’s the sum of the technology, design and quality that makes the i8 feel worth every penny of its $135,750 base price. With that you get pretty much everything included with the only choices being colors inside and out. One exception to that is the interactive key-fob that is Android based and features a gorgeous multitouch screen. That option is expected later this year as the software is still being refined. 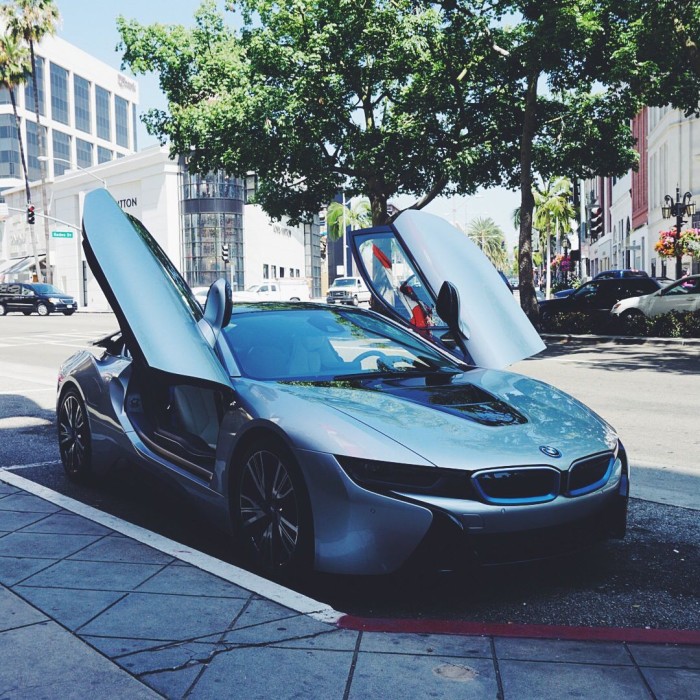 Under the hood (which clearly is a euphemism) BMW has stocked the i8 with tech that wouldn’t be out of place in a super car costing dramatically more. The big difference in the petrol powered engine is a MINI derived three cylinder pumping out a respectable 228 hp instead of the monstrous engines found in the LaFerrari or the McLaren P1. Dig deeper and things get a bit more interesting.

The i8’s battery pack (there are six battery units in total) is centered in the car where the driveshaft would be thereby placing all the associated weight as low and centered as possible. Just in front of the bulkhead is the front electric motor (derived from the i3) which has an output of 129 hp and is connected to the drivetrain via a 2 speed transmission (one required for electric mode, the other for everything else). 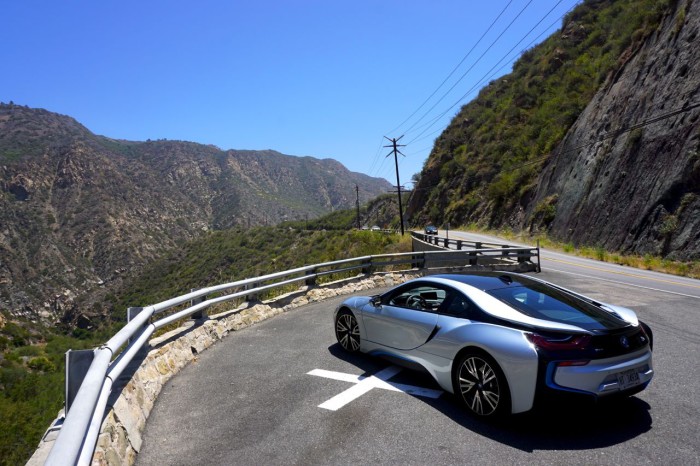 But one of the surprises of the drivetrain isn’t either of these engines but the little electric motor situated to the side of the three cylinder. It’s a belt driven electric motor that produces 11 hp and 37 ft lbs but is used in simple but very effective ways. For one it helps to provide the almost seamless start/stop system, as well as charging the high voltage (400 volts) system used within the drivetrain.

Where things get interesting is how the i8 uses it to improve performance and power delivery. To help produce more power BMW uses the turbo from the 2.0L MINI engine. Because that larger turbo produces more lag, BMW applies power from the smaller electric engine to create a seamless torque curve from start to finish. The result is a three cylinder that not only punches above its weight but feels as linear as BMW’s famed naturally aspirated inline six’s from a few years ago. 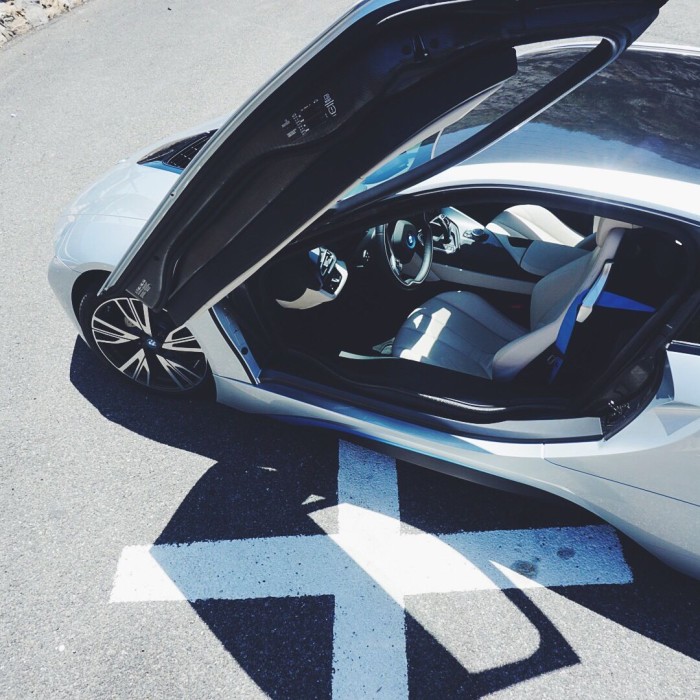 The other surprise has to be how good the Asin 6 speed automatic is in the i8. Yes this is the same automatic that MINI has used in the Cooper and Cooper S since 2004 with varying degrees of success. To be blunt it’s never had anything other than a mediocre performance and response. However in the i8 it’s nothing short of a revelation, swapping gears faster and with more authority than even the highly acclaimed 8 speed auto (found in most other BMWs). It matches revs brilliantly with seemingly zero lag and all the rev matching fireworks (and exhaust overrun) you’d hope for. In fact based on the seat of the pants feel, it felt almost as quick as even the DCT found in the M3 and M4 I drove just days later.

Efficiency is unsurprisingly impressive. The i8 has a 22 mile range in full electric mode with a top speed of 75 mph. Living with the i8 for a day around southern California made me realize how important this feature is. Gliding in full electric mode from light to light felt so much more sensible than engaging the three cylinder. It also gave the car an even further sense of being otherworldly both inside and out. 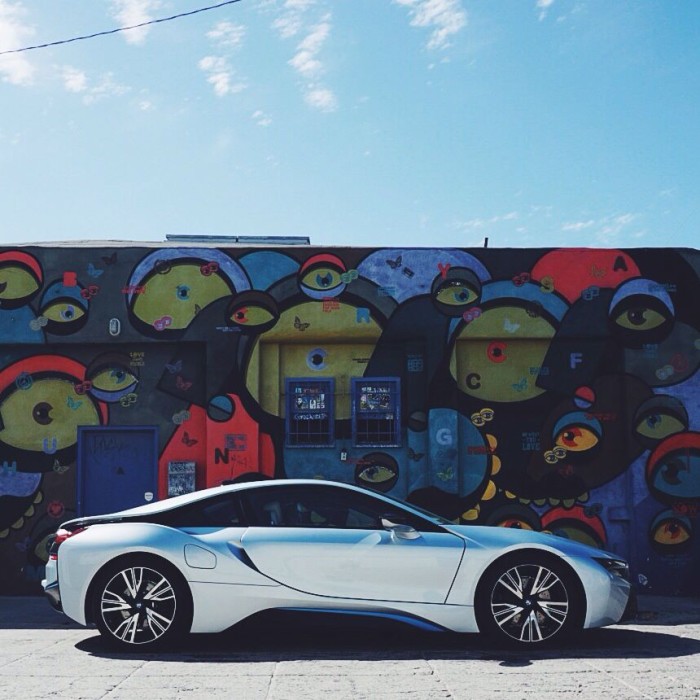 Overall the i8 will do over 90 mpg in day to day driving with the petrol range begin over 300 miles (with a 42L tank). Not bad for a car with a combined power output of 357 hp.

The real magic of the i8 however is how seamless it all feels. With three engines, two gearboxes and enormous data being processed constantly, the i8 is incredibly complex yet fulfills the simple joys of motoring. Power delivery is instantaneous, smooth and seemingly always there throughout the rev range. 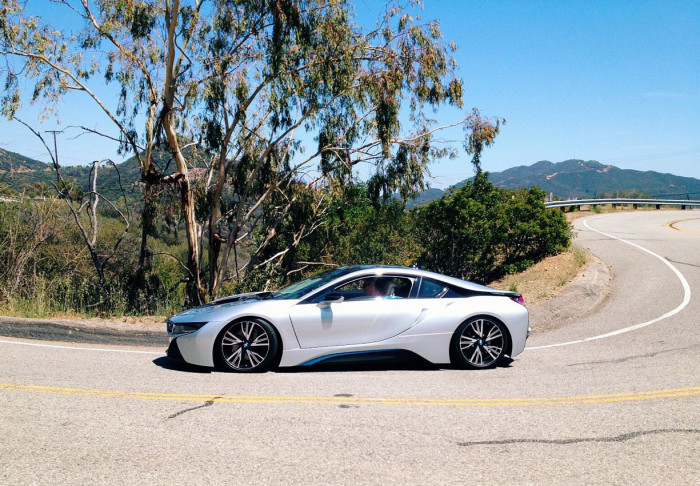 None of this magic would matter much if the i8 didn’t excite from behind the wheel. Lucky for us our day provided a range of ways for the i8 to impress us in its performance. Flipping through the drive modes eMode, ECO Pro, Comfort and finally to Sport gives great look at the range that this 21st century super car has.

However as we head to the canyons north of LA it’s Sport mode that we’re most interested in. Flipping the lever into manual mode and press the rocker a few times to engage sport, we start heading upward and onward through Mulholland Hwy. The response of the 1.5L three cylinder is one thing, but the sound is another. Yes it’s augmented by science, but my God did they get it right. The sounds emitted from… somewhere matches ferocity of the power delivery and finishes off that sense of Jekyll and Hyde more than any car I’ve ever driven. From the pops on overrun to the on-throttle roar the i8 transforms into a snarling sinister sounding sports car so easily that you wonder what’s real and what isn’t. And then you realize you don’t care because of how it all feels. 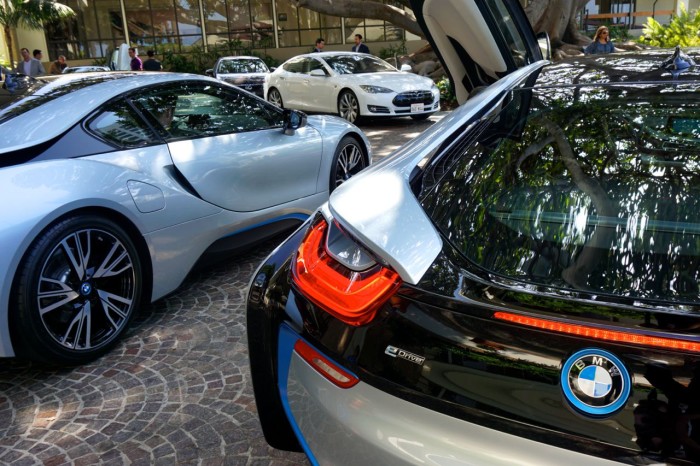 And this coming from a car that, moments ago, was gliding silently through traffic getting thumbs up from a Tesla owner.

Did we mention the word feel? Lets be specific with that. This isn’t a car that will delight you with a telepathic sense through the rim of the wheel. With EPS power the steering the i8 will not provide the level of feedback you’d get in an M car – even the new EPS powered M3 and M4. But the steering, the throttle and the brakes are all so accurate that you feel as if the car has wrapped around you. It all serves to give me an extra level of confidence as I hurry this $136K pre-production super car up one of the more challenging canyon roads in the US.

The i8 rewards a delicate touch through the twisties. But the moment you get too ambitious with corner speed, you’re treated with copious amounts of understeer. It’s not unexpected – this is 2014 and this is a sports car with an incredibly narrow ECO friendly tired. 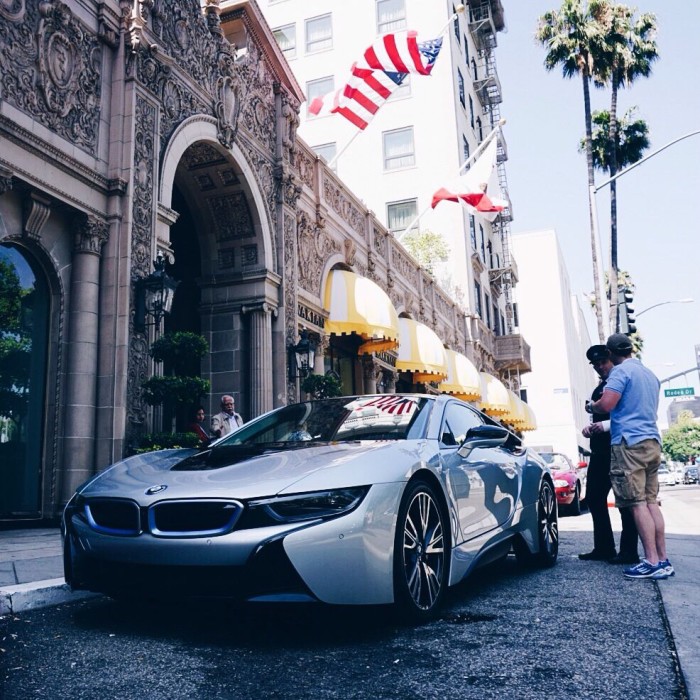 As much as we want the i8 to be some derivation of an M car, it’s simply not. Despite this the i8 is a surprisingly rewarding machine that delights with precision and balance while providing a feast for the senses in every other way.

With the i8 BMW sought to create a responsible sports car. But in doing so they didn’t cop-out and build a million dollar hypercar accessible to the super rich. Instead they took the much harder route of building a car with all that tech for a 1/10th of the price. All while delivering all of the typical hypercar drama. 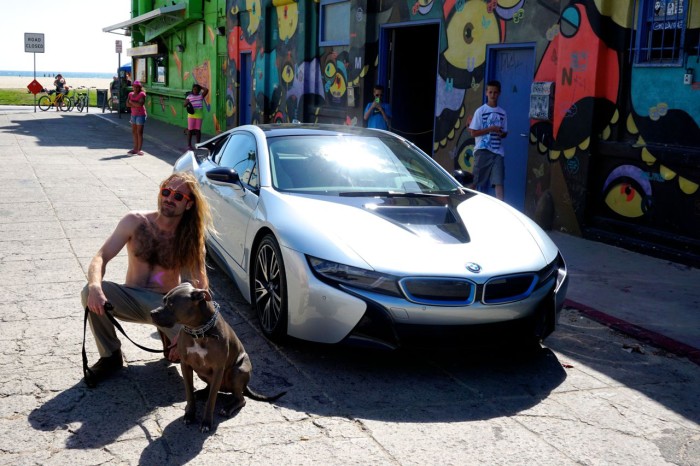 And in the i8 the drama is everywhere. Inside out this is a car that’s practically dripping with it. Gliding into Ventura Beach in full electric mode I came face to face with what that means in the real world. I could hear the oohs and has as I pulled up. But when we raised the doors shocked expletives came streaming out of mouths. By the time both my feet hit the ground we were surrounded by i8 groupies wanting to know what it was, how much it cost and who we were. At that moment the i8 wasn’t just another expensive bourgeois sports car. Instead it was a look at a glorious future.

After 15 minutes of madness we slid back into the seats and lowered the doors. In full electric mode the i8 silently wafted away from the adoring crowds and back onto the LA streets. With iPad toting tourists taking photos and necks snapping left and right it was clear that BMW had nailed the brief. A sports car, a piece of artwork on wheels and an answer to climate change in one $136,000 package. If this is the future of the brand and the automobile, let’s get started. 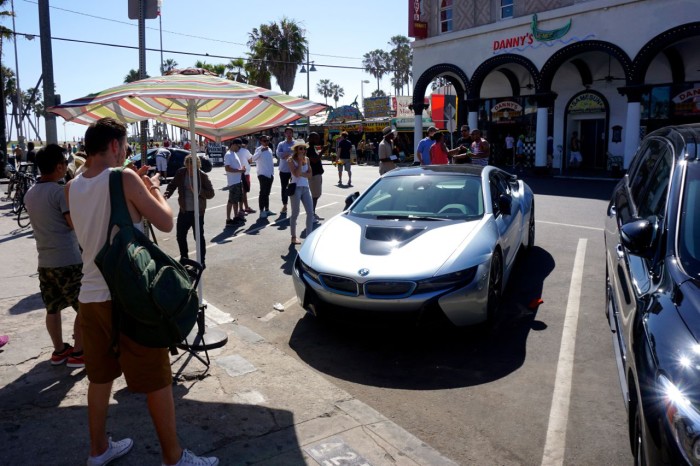