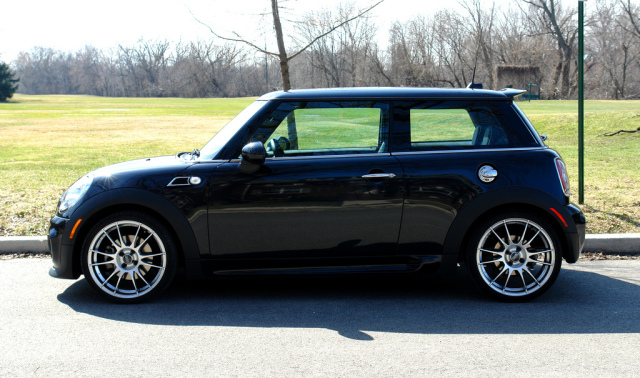 In 2007 MotoringFile took delivery of our first R56 and with it a number of JCW accessories – most importantly the JCW Tuning Kit. With the F56 JCW Tuning being released this fall we thought we’d look back to remind ourselves what came before.

This is quite a contrast to the previous kit available for the R52 and R53 that included such items as a new head and inter-cooler and pretty big freakn’ check from the new owner. In fact the new kit is almost 1/3 of the $6000 price tag the R52/R53 dealer installed version rang up. But is it even worth the lower $2000 price tag? Especially now that there are so many aftermarket tuning options for the R56? 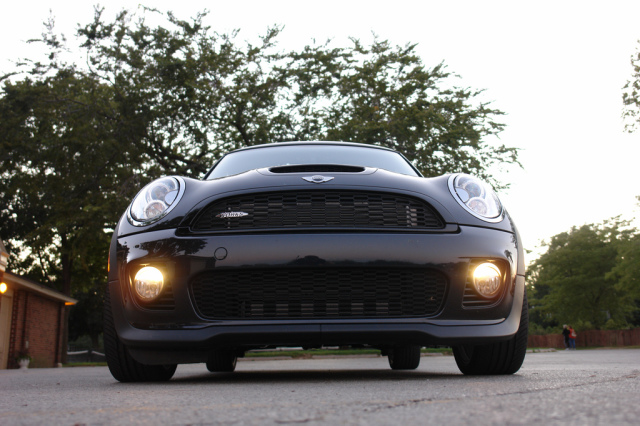 The JCW Engine kit takes the 2007 MCS from 175bhp to 192bhp in original guise and a few more HP for 2011-2013 models. But more importantly it increases torque to as much as 200lbf-ft with the over-boost function (again more with the post 2011 facelift years). To put that in perspective, that’s more than the JCW GP had. Also better than the GP (and all previous JCW kits) is the throttle response. The ECU tuning sharpens the already faster throttle tip-in (with sport button on of course) to even higher levels.

While you feel the extra power throughout the band, the high-end is where it really impresses. While the torque curve is as flat as ever, the peak power comes on gradually throughout the range peaking at the 6000rpm mark (at 192bhp). This, coupled with the new turbo engine’s eagerness to rev, gives you the sense of having more than enough power anywhere and anytime. In fact, with all the torque down low and power up high, the FWD drive-train works hard to just get rubber down to the pavement in spirited acceleration. While the JCW Suspension (also installed on the car in question) helps keep weight from shifting too much to the rear on take-off, there’s still enough transfer that traction can be at a premium in quick launches. 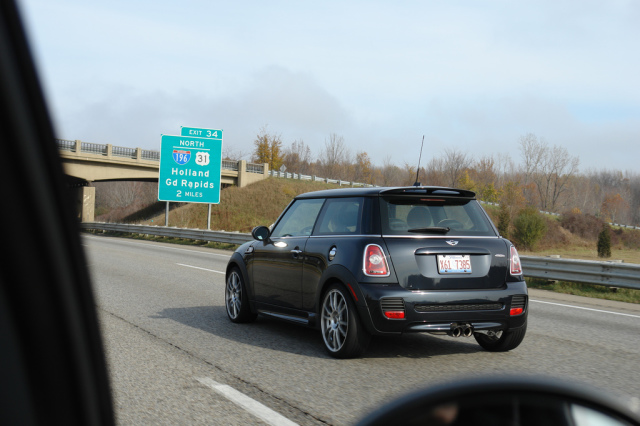 As with the previous JCW kit, this upgrade amplifies the character of the car. Naturally this makes it decidedly different than the raspy, snarling character of the R53 JCW kit. But instead of the supercharger wine and the exhaust pops you get a mean sounding 4 cylinder that has a hint of refinement and sophistication about it. The exhaust has a deeper tone that (like the previous kit) is in no way is loud or obnoxious. It’s a character that fits with the new car and (dare I say it) is a little easier to live with day to day. It’s not nearly as refined as the F56, but then again that’s music to many of your ears I’d bet.

Comparing the R56 Tuning Kit with the previous R53 JCW, it’s really hard to feel a difference in speed with just the seat of the pants in a standard 0-60 test. And the figures below bear this out. However one area that you can legitimately feel an improvement is in mid-range 4th gear acceleration – the kind many of us enjoy on on-ramps or in passing situations. Here the car seems to have endless power similar to what you’d experience with the JCW GP. In fact, this particular time is actually more inline with BMW’s published data for the GP. 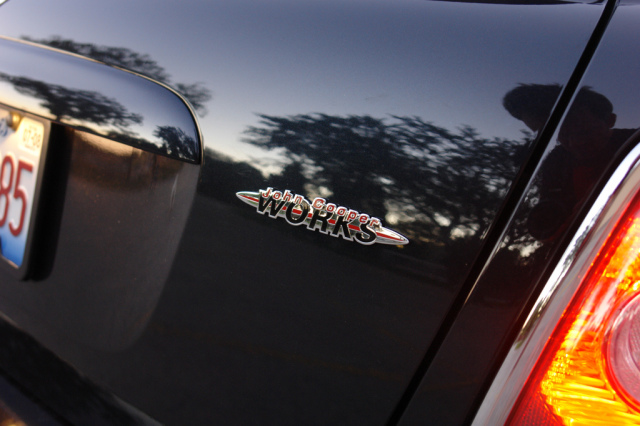 Downsides? As with any OEM accessory price vs performance isn’t as high as it theoretically could be from the after-market. I also found it a little less satisfying not researching components and/or installing everything myself as I had with the R53. But with time marching on the notion of getting under the hood seems like distant memory anyway.

Then there’s the notion that $2000 is only buying a few physical components – an exhaust, intake and some pieces of plastic. Obviously there’s the BMW ECU tuning and countless hours of engineering and testing that also add to the cost. Yes, taken as a whole it’s easier pill to swallow than the previous kit. But still, for those who love building their own car via the wonderful MINI after-market, I have no doubt that this kit won’t be the answer their looking for.

At this point if you’re considering the kit your Cooper S is either out of warranty or getting close to it. So it is this all worth it? It really depends on what you want from the car and what you intend to use it for. If you’re budgeting about $2k on upgrades and you plan on extensively tracking your R56 MCS, I’d actually recommend the JCW Suspension kit (or a quality after-market equivalent) over the engine kit. However if you’re going to be driving primarily on the street with one or two track days a year, than this kit starts to get very attractive. Yes there are some pretty compelling after-market upgrades for the R56. And there’s little question that you can put together a comparable list of after-market components that come in under $2k. But what MINI has done with the JCW kit is to create a cohesive upgrade that leverages the knowledge of those who designed and engineered the car. It’s almost as if these components within the kit are simply the final stage of production and they had been intended all along.