Known as being fun-to-drive while sporting an iconic style, MINI began to focus on the connected aspect of driving. While the original MINI Connected debuted to much acclaim, other automakers have slowly began to catch up to the technology with their own connected car apps. That has lead MINI to revamp its strategy by releasing one new app and completely re-writing another. Because of this we thought it might be time for a refresher of the MINI Connected offerings and how they have evolved. 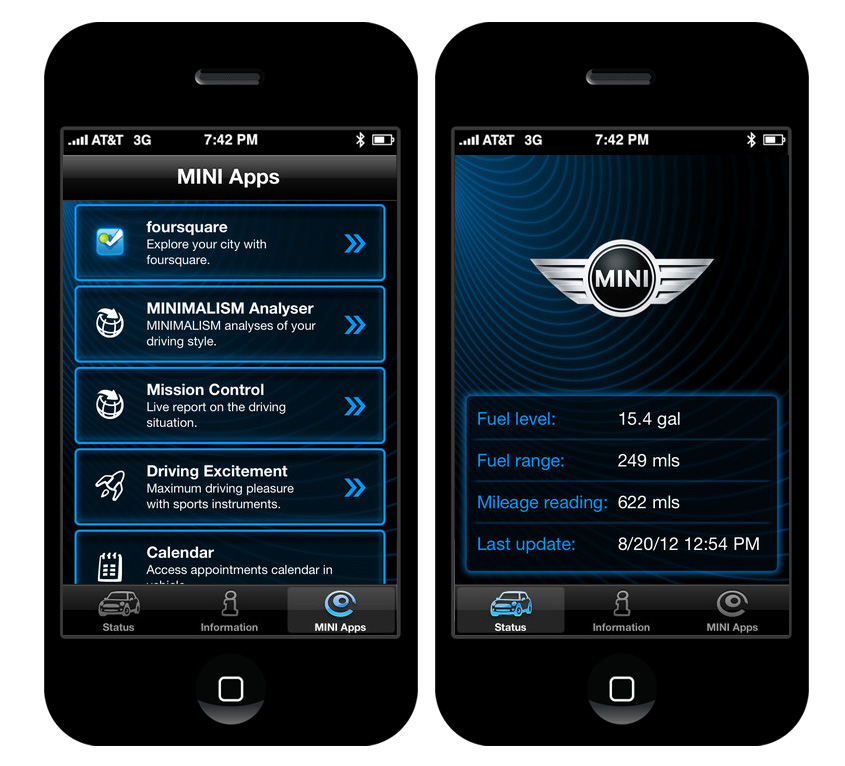 An available feature for cars hitting the market in 2010, MINI Connected started as a “mini version of iDrive.” As parent company BMW utilized this iDrive system on its luxury vehicle lineup, MINI began their own infotainment system using iDrive as the foundation for its MINI Connected. The purpose of this concept was to align the most-coveted electronic device with the driver’s car; thus, a smooth and effortless integration of car and phone was born.

Purchasing MINI Connected can be made as either a separate feature or as part of a package deal on all models. Most notably, the Media or Wired packages are available on 2-door and 4-door models, while the Countryman offers a Media or Navigation and Connected package. The Clubman takes it up a notch with the Technology Package that includes navigation and Connected. Perhaps the strongest aspect of this system is the ease of combining the phone into the car’s control panel.

After 5 years, MINI revamped their on-point infotainment system with more focus on the driver’s needs. While existing features were improved, along came new features like Streetwise, Sports Instruments, Calendar and Online Search. Along with the hard shortcut buttons, the user-friendliness was enhanced with a “multidirectional joystick.” The previous small control knob is replaced by a bigger knob that is much easier to navigate.

MINI Streetwise keeps important driving information at the driver’s fingertips. Sports Instrument accesses information on the car such as engine temperature and output, speed and torque. Force Meter projects all accelerating forces onto the screen while you cruise. The combination of the Connected apps optimize the driver’s appointments, to-do lists and events by displaying them on the console’s screen. In fact, scheduled appointments can be linked to the corresponding address making route navigation a breeze.

With the new 3.0 version of Streetwise, routes can be predicted based on previous paths traveled and take into account fuel consumption and duration of the trip to coordinate the best route possible. This feature replaces the previous MINI Mission Control.

Perhaps the biggest upgrade from the MINI Connected is the new XL Journey Mate. Available on new MINI vehicles as of April 2014, the XL Journey Mate has become the driver’s ever-present new best friend. In order to use this new technology genius, the MINI must be equipped with the Wired package. The Wired package incorporates the latest GPS technology to MINI with the inclusion of the Professional Navigation System.

The new features appearing on the XL Journey Mate are geared to the driver’s needs and desires. Most notable are the touch controller and multi-functional buttons located on the steering wheel. Trip planning is optimized with the ability to pre-plan on your Mac or PC allowing seamless integration onto the 8.8 inch on-board monitor. From this screen, fueling up with as little diversion from the route is easily achieved since the route has already been calculated and the app utilizes real time traffic information and highlights gas stations along the way. Some convenient aspects include the final destination’s weather as well as parking spot locating.

The XL Journey Mate doesn’t stop once you’ve arrived. A pedestrian navigation function displays on your smartphone and leads you to the exact location desired. And don’t sweat worrying about where you parked. This navigation remembers your parking spot and guides you there when you’re ready to go. Once destinations are reached, these routes can be stored and accessed later.

To maximize these benefits drivers must have an iPhone. The system will use the iPhone’s connectivity to run all of these best-of-the-class navigating technology features.
Conclusion

With a foundation in their parent company’s iDrive, the MINI brand is positioned well within the connected car space. While the current versions of the apps aren’t necessarily rated that highly, most of that seems to be related to buggy releases and not necessarily due to features or overall strategy.