Official Release: After much anticipation, MINI USA today announced the official route for the 2016 running of MINI TAKES THE STATES. The legendary biennial cross-country owners rally will kick off at Road Atlanta in northeast Georgia on July 9, 2016 and finish at the Thermal Club in Palm Springs, CA, on July 23, 2016. 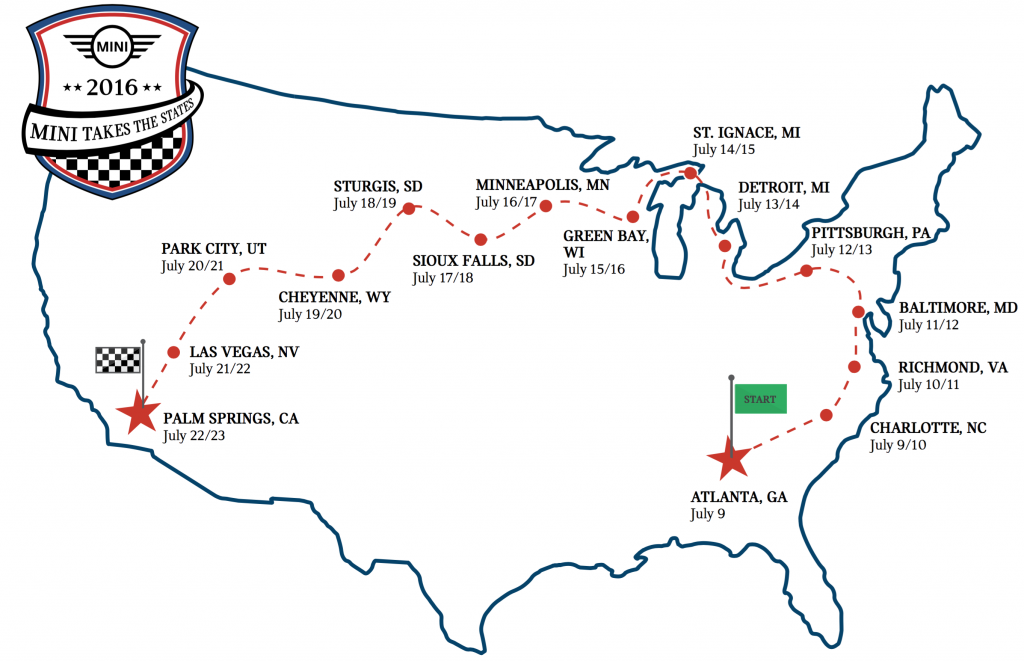 In true MINI TAKES THE STATES fashion, the route will not take a direct path from point A to point B. The more than 4,000-mile “track-to-track” adventure will travel up the east coast, across the Great Plains and over the Rocky Mountains before arriving in Southern California. The legendary adventure, which attracts thousands of MINI owners and enthusiasts every other year, will pay tribute to the brand’s motorsports heritage by stopping at several professional race tracks to host driving experiences along the way.
“MINI TAKES THE STATES is one of the most anticipated experiences that the MINI community takes part in every other year,” said David Duncan, Vice President MINI of the Americas. “Owning a MINI is about being a part of a community and never is that more evident than during MINI TAKES THE STATES. We can’t wait to hit the road this summer!”

MINI TAKES THE STATES 2016 will leave Atlanta making stops in Charlotte, NC, Richmond, VA, and Baltimore, MD. The route then turns slightly west heading towards stops in Pittsburgh, PA, and Detroit, MI. The group of owners and MINI employees will then head north and cross over the legendary Mackinac Bridge, considered to be a rite of passage for thousands of MINI owners who have participated in the biennial MINI on the Mack event before arriving in St. Ignace, MI.

After crossing over into Michigan’s Upper Peninsula the route heads along the banks of Lake Michigan to Green Bay, WI, before heading west for stops in Minneapolis, MN, and Sioux Falls, SD. The rallying MINI owners will then motor across the Great Plains and through the Black Hills where they’ll make a pit stop in Sturgis, SD, home of the legendary motorcycle rally. The route then heads south for the final legs of the epic journey making stops in Cheyenne, WY, Park City, UT, and Las Vegas, NV, before finally crossing the finish line in Palm Springs, CA.

Stay tuned for more updates or visit MINITAKESTHESTATES.com to receive email updates. For blog posts and press images from MINI TAKES THE STATES 2014 please visit the MTTS 2014 page on MINIUSANEWS.com. Media interested in updates on MINI USA can also follow us on Twitter at @MINIUSANEWS.

MINI USA Sales Up 34% for August