It’s another month of poor sales numbers for MINI. What’s odd here is that world-wide, MINI is doing pretty well. But here in the US, there is no denying that the brand is lagging the field. A combination of low fuel prices, product introduction timing and more segment competition is really hurting sales in the US. Interestingly, the MINI dealer network is more bullish, with the recent introduction of the 2016 Clubman, and the soon-to-be-released 2017 Countryman,  Michael Vadasz, chairman of the MINI Dealer Council, expects to retain many MINI owners who still love their cars, but have outgrown the past product mix.

Matt’s MINI Index shows the effects of low gas prices here in the US. Scion is the only brand with any growth to speak of, and it’s on life support until Toyota pulls the plug in July. But the index is down almost 9% overall. Not a good month for any brand the relies on small cars. 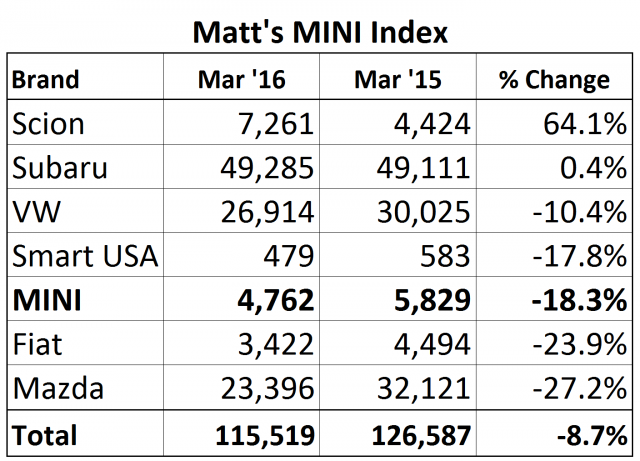 Woodcliff Lake, NJ – April 1, 2016… Sales of BMW brand vehicles decreased 12.5 percent in March for a total of 30,033 compared to 34,310 vehicles sold in March, 2015.  Year-to-date, BMW brand is down 10.0 percent on sales of 70,613 compared to 78,492 sold in the first three months of 2015.
Of particular note in March, were strong increases in the sales of BMW Sports Activity Vehicles, in particular the BMW X1 and the BMW X3.  The popular new BMW 7 Series continues its sales success, increasing by 16.1 percent over March 2015.
“It’s been a tumultuous first quarter of the year for business in the U.S. with plenty of volatility even in the premium vehicle segment,” said Ludwig Willisch, President and CEO, BMW of North America. “The desire for premium Sports Activity Vehicles continues accelerating at a strong pace in the U.S. and I’m very pleased that our SAV plant in South Carolina will make another production increase in the months ahead to help us satisfy the ever-growing demand for our X models.”

2017 Dakar Rally Ends with Exhaustion and Celebration for MINI