MINI sales decline continues into April this year, with monthly sales down by 680 units compared to last year. The only real good news for the brand seems to be that the new Clubman is moving pretty well (as is it’s platform sibling, the BMW X1), and used vehicle sales are at record levels as well.

MINI is in a tough spot here in the US. Continued low gas prices make it hard for all small cars, and the fact that MINI is self-described as a “Premium Small Car” doesn’t help much either, as heavily optioned cars can get very expensive very quickly. More competitive products from other brands, and a very small product portfolio are making 2016 a difficult year for MINI. Even MINI admits it’s difficult position. We’ve talked about the “Five Superheros” of the brand, but MINI can’t figure out what the fifth will be. In an interview with Automotive News, Peter Schwarzenbauer, BMW Group’s board member in charge of Mini, admits that adding a sedan would help sales but doesn’t really fit the brand. A roadster like the Superleggera fits the brand, but they don’t have a chassis and it’s a bad business case, as roadster sales don ‘t add many units. (The twins made the cut because they were derived from the existing R56 chassis.) To make matters more challenging, Schwarzenbauer said that as of March, there were no plans for a fully electric MINI, as well as hedging his bets on further plug-in offerings. And for those that are hoping for something based on the Rocketman concept, he said that they currently don’t have any platforms that could support that type of car. Reading between the lines, it seems that MINI doesn’t really know what to do.

The dealers seem to be a bit more optimistic. While 2016 is starting off challenging, the Clubman is selling well, and reaching buyers who aren’t interested in small cars, but do want something in the Compact segment. They are eagerly awaiting volume deliveries of the new convertible and a redesigned Countryman, but until both of these are shipping in volume, it’s looking like it will be a difficult climate here in the US for MINI. Matt’s MINI Index is basically flat this month. But Fiat is the only brand in the index that performed worse. 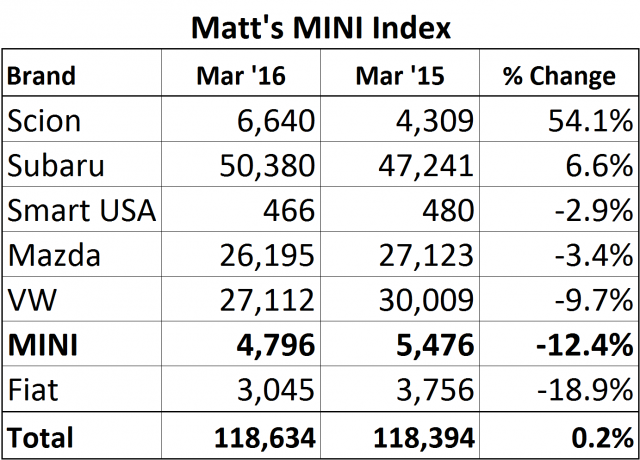 MINI Launches the Book “Wash Me”