MINI is once again entering the world of electrification. The MINI Countryman E will be the brand’s first plug-in hybrid effectively following up the all electric R56 MINI E from 2011. We’ve reported on the details of the PHEV Countryman E for over a year now, but today we’re bringing you the first photos and schematics of the car outlining some of its finer details.

Lets start with the branding. As you see in the photo above and below MINI will be resurrecting the “E” model designation first used on the MINI E with the new plugin Countryman. While some might scoff at the idea of the Countryman E being compared to the MINI E, in real world usage there will be lots of similarities. 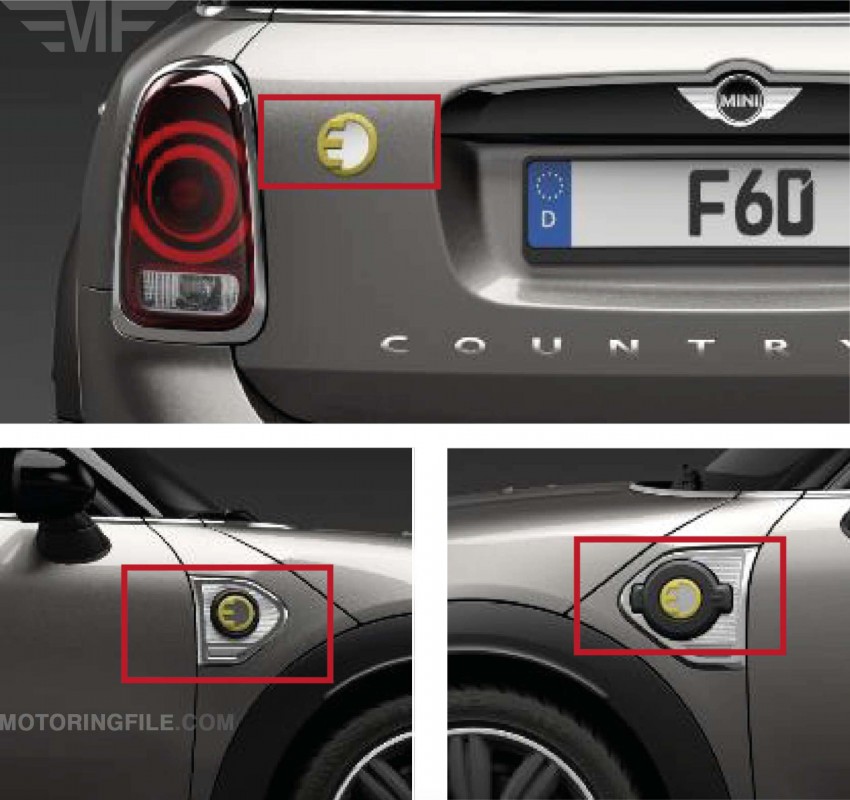 Before we get into that lets also talk about what we’re seeing in these photos. While this isn’t a full view of the new Countryman, there’s still a lot to see. While the overall design is obviously evolutionary, this will feel like a very new car. The very design language has evolved to be more aggressive and taut with sharper creases throughout.

Based on the UKL2 platform, the 2017 Countryman isn’t just a refresh but an entirely new car from the ground up. Because of that MINI has taken the time to go back to the drawing board to define a car that better meets the needs of owners. The F60 Countryman it’s both wider and longer than it’s predecessor the R60. How big is it? We’ve been told it’ll be slightly taller than the current Countryman and slightly longer than the new Clubman. 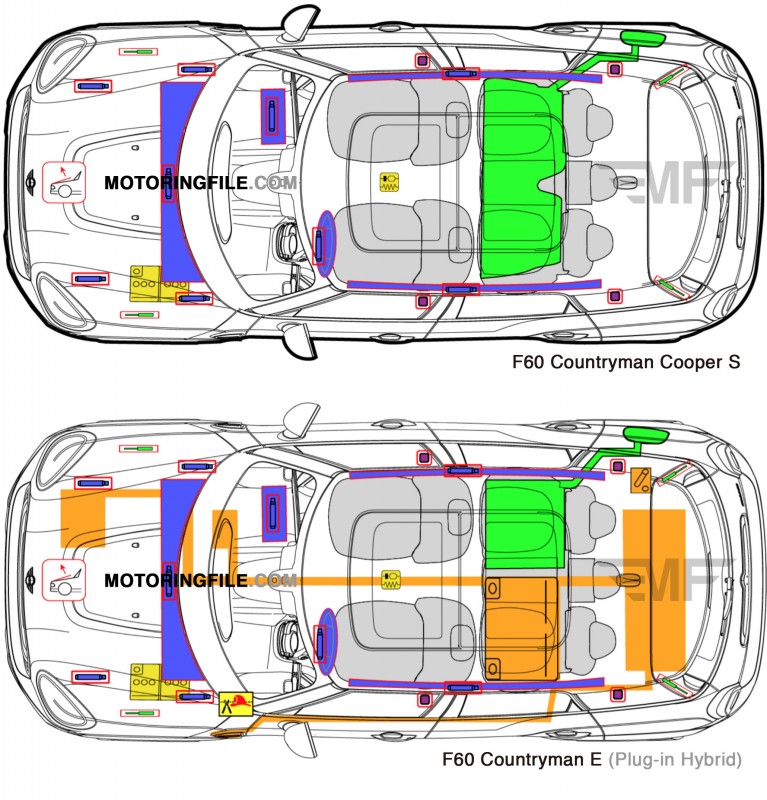 As you can see in the schematic above the Countryman E has half the fuel tank of the Countryman Cooper S. The other half is taken up by the kWh 7.7 lithium ion battery. Under the rear floor is where the 88 HP electric motor sits.

As with the BMW i8, the intelligent drivetrain management and networking with the DSC (Dynamic Stability Control) system ensure safe and supremely assured handling characteristics at all times, together with optimized traction, highly dynamic acceleration and cornering, and maximum efficiency.

The Countryman E plug-in hybrid prototype accelerates from 0 to 100 km/h in around 6.5 seconds. Its average fuel consumption in the EU test cycle for plug-in hybrid vehicles will be approximately two litres per 100 kilometres, which equates to CO2 emissions of under 50 grams per kilometre. The range on electric power alone as measured in the EU test cycle will be 38 kilometers or about 24 miles. MINI will likely allow for a 50 mph limit to electric power giving the Countryman E the ability to run in 100% electric mode for many urban commutes.

When Can I Buy a Countryman E?

It looks like MINI have accelerated the pace of development of the car to coincide with the general F60 Countryman rollout. This means that we could see the Countryman E debut alongside the Cooper and Cooper this this summer on the web with a public debut happening this September. Sales should begin very early in 2017.

Opinion: 301 HP Could Change Everything For MINI