It’s been a while since we reported good news in MINI USA monthly year-on-year sales numbers, but the day is finally here! Yes, sales were down a meager 2.7% compared to August last year, but that is in a month when overall light vehicle sales in the US dropped 3.6%. Before all the nay-sayers say it’s still a drop, there are two things to consider: First is that while there were the same number of sales days in August this year and last, there was one less weekend this year; Second, if one only looks at the four core variants (The Coupe, the Clubman, the Convertible and the Countryman) sales were actually up when compared to last August. Sales of the Twins and the Paceman have practically zeroed (Down over 99% from 660 units to only 6), and that decrease more than accounts for the total decline of 140 units compared to last year. CPO and Certified Used sales are up a bit as well. Overall, this is a much better month than pretty much all of this year has been.

If one looks at Matt’s MINI Index, MINI outperformed all but Scion and Subaru. July was supposed to be the last month that Scion was reported as a separate brand, but we’re guessing that it’s doing so well that Toyota may be dragging it’s feet on finally closing it down for good. 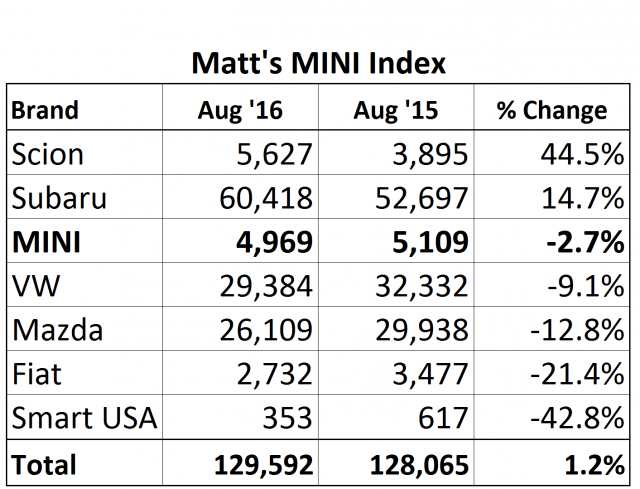 MINI Pre-Owned Vehicles
In August, sales of MINI Certified Pre-Owned set a record with 1,267 vehicles, an increase of 11.7 percent from August 2015.

MINI USA Lowers Financing APR to 2.9% on All Hardtop Models

Sales Gains for MINI Worldwide in ’08