Yes, total monthly year-on-year sales did drop 3.3%. But this is for a month where total US light vehicle sales dropped 4.7% (Probably more, but Ford has delayed reporting due to a fire in corporate HQ on Monday.) Not only that, but in Matt’s MINI Index, MINI placed second, only behind Subaru! And this was in a month that had two less sales days than October 2015.

Looking more deeply into the numbers, there is no doubt that the new Clubman is doing well. Total 4-door sales grew to 2,741 units from 2,237 compared to October last year. While the MINI purists lament the increase in footprint of the latest offerings, the numbers don’t lie: The larger vehicles have greater market appeal. 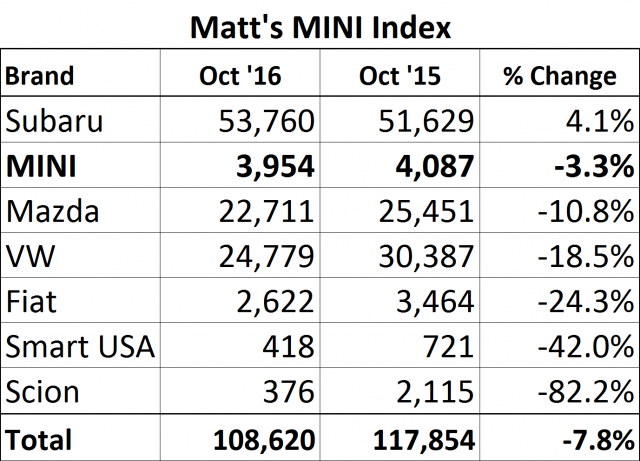 Looking more closely at the competition, MINI’s numbers don’t look bad at all. The consumer love-affair with Scion seems to be over as inventory becomes scarce. Smart USA offerings just don’t really appeal to the US buyer market. Fiat and VW both continue to hemorrhage sales. Mazda makes very compelling vehicles, but they don’t seem to command buyer attention and dollars. Any of these brands would be much happier with only a 3.3% monthly year-on-year decline. But all of this comes with a grain of salt: MINI sales seem to be stabilizing here in the US, but at a lower total volume than last year. MINI is holding it’s own, but as a slightly smaller company than it was last year.

Worldwide MINI Sales Up 31% for September