MINI USA ended 2016 down, but far from out. December deliveries were down 7% compared to the same month in 2015, but this is still less of a decline than the 11.1% than the brand suffered over the entire year. MINI USA seems to have stabilized at a lower volume than the year before. In reality, a large portion of this is the Twins and the Paceman. Excluding these, MINI’s 2016 performance is in line with Mazda, and better than VW. Truth be told, it was a tough year for MINI, but they seem to be coming out of it better than the parent company BMW. 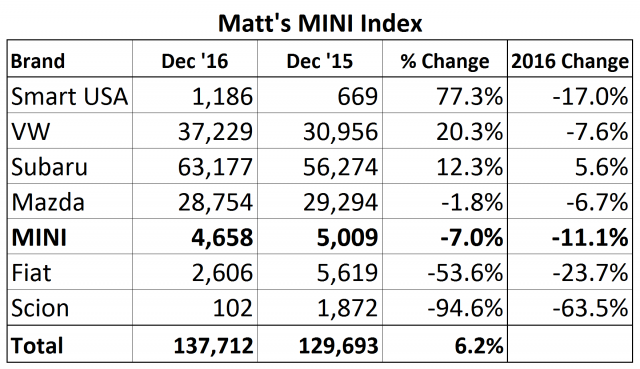 Looking at Matt’s MINI Index, it appears that December was one of those anomalous months. The year has been rather off for the brand as a whole. There’s no explaining Smart selling so well, other than the fact that the car actually would fit under the Christmas tree. VW’s numbers are artificially high because of the sales depression caused by diesel-gate, the second month in a row VW can be happy for basically just surviving the storm. Considering these facts, it’s hard to really place MINIs performance in context based on the December numbers. 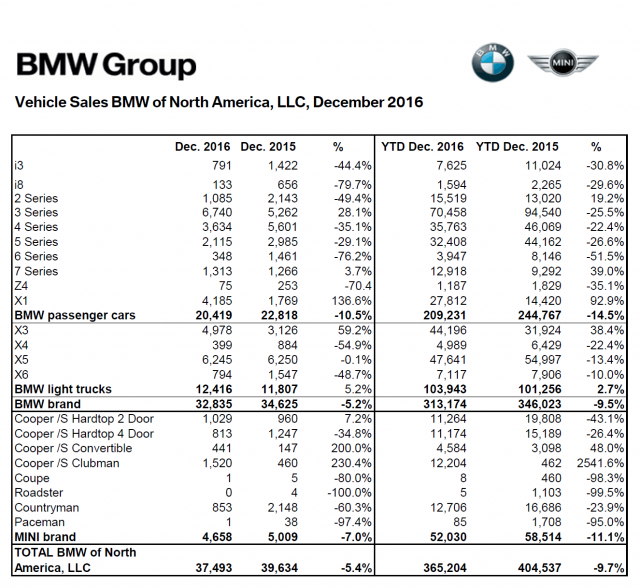 This month, the 2-door, convertible and the Clubman did well. The uptick in the Clubman more than offsets the decline in the 4-door, and with the Countryman coming soon, 2017 looks to be starting on a positive note for the brand. One thing that bothers us a bit, is that the good Clubman news isn’t even earning a mention in the official press release.