Stage 4 of the 2017 Dakar proved eventful today, but it was successful for many of the MINI competitors, with six pairings continuing to improve on their overall position in the standings despite the challenges of this tough stage. A difficult start to the 521km stage for X-raid Team’s Mikko Hirvonen (FIN) and Michel Périn (FRA) in the #303 MINI John Cooper Works Rally car was not indicative of the stage as a whole. Having dropped to 10th place at the first checkpoint, the Finnish driver quickly regained pace with strong navigation support from his French co-driver. The reward was 2nd place at the finish line in Tupiza to move them up to 3d overall.

Hirvonen said: “It was a good day but also very difficult; difficult navigation and then we had sand dunes at 4,000 metres and they were really high, even higher than ones I saw recently in Abu Dhabi. It was really difficult to get to the top, but then we always found the traction and managed somehow to tackle them and Michel did a good job. We fought all the way through and did all we could with no mistakes so all good and it went well.” 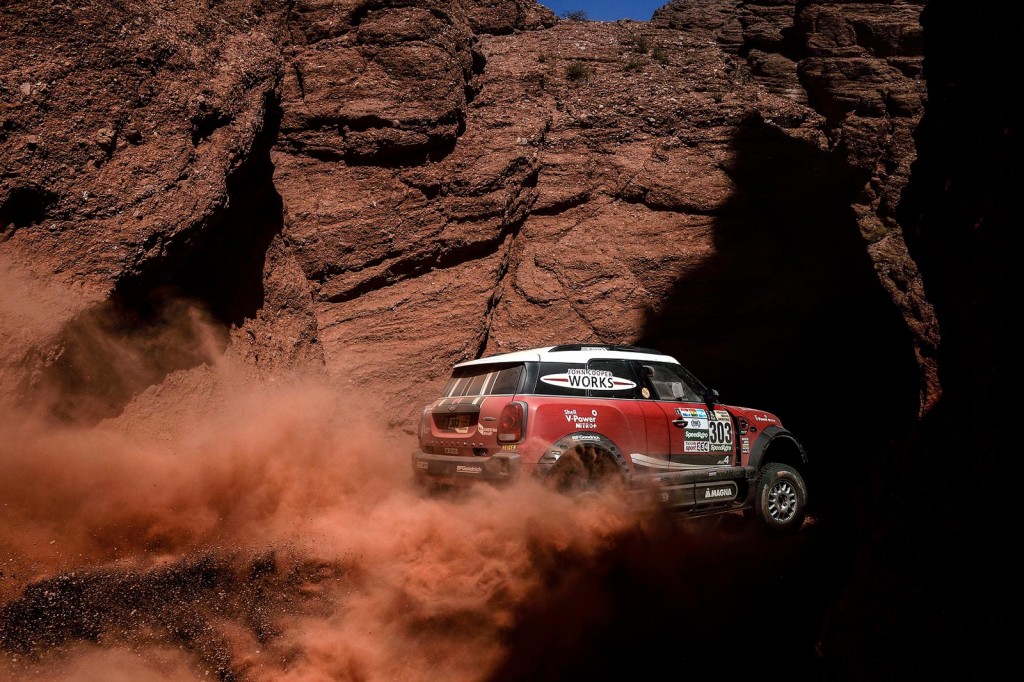 Jakub Przygonski (POL) and Tom Colsoul (BEL) in the MINI ALL4 Racing #316 also enjoyed a strong performance in today’s stage, which began with a good early attack that saw them reach waypoint 2 in fifth position. However, it was difficult for the pair to maintain their advantage and they slipped back slightly to 7th place, but the result was still good enough to move them further up the overall standings where they now sit in 6th. At 00:36:35 behind the fifth placed car though, the MINI pair still has a challenge ahead to achieve a top five Dakar result.

Przygonski: “It was a good stage for us but the beginning with the high altitude on the sand dunes at 4,000 metres was really hard. I worked with Tom well to find the easiest places to pass and we did well; Tom’s navigation was really perfect and we enjoyed this stage.” 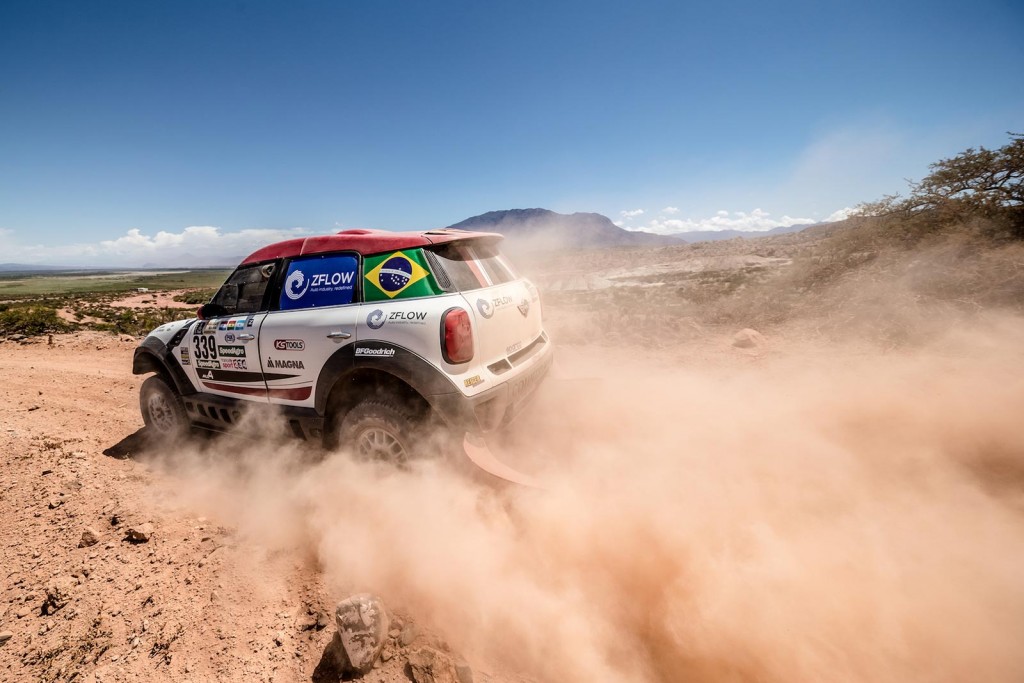 One of the real stars of today was Boris Garafulic (ARG), who recorded his best ever stage finish in seven Dakars with the support of co-driver Filipe Palmeiro (POR). An amazing start saw the pair pass waypoint 2 in a surprise third place before slipping back gradually throughout the stage to secure a 9th place finish today. The performance has boosted Garafulic’s overall position in the standings to 9th – eight places higher than at the end of yesterday’s stage!

Garafulic: “We had a good day. There were dunes I had never seen before, even though I am from Chile, but these were really high and also soft. I think for anyone who didn’t have major experience with dunes, today was a hard day but we did ok.”

Following today’s attack, Garafulic is now just over 30 minutes behind the #308 MINI John Cooper Works Rally of Orlando Terranova (ARG) and co-driver Andreas Schulz (GER) who maintained 8th position on the leader board today after a 10th place stage finish. 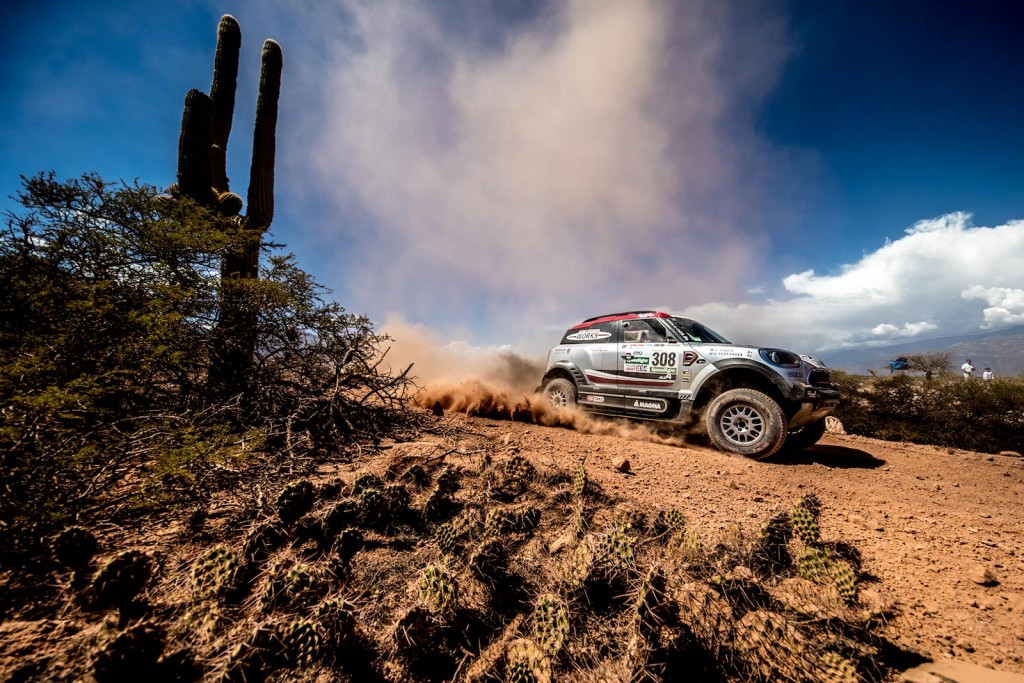 Terranova: “It was a difficult stage for us, we made a navigation mistake and we couldn’t take the waypoint at the beginning. The dunes were very difficult and the temperature was high again. I started to feel a little sick in the high altitude but we continued.”

The steep learning curve continued for Mohamed Abu Issa (QAT) on his debut Dakar in a car with the help of co-driver Xavier Panseri (FRA)in the #322 MINI ALL4 Racing. The pair climbed four places overall to 12th place today, after crossing the finish line for the stage in the same position.

Abu Issa: “Today we were expecting some soft sand, of course, but not all the way through and there were also some rocks in the beginning, but honestly the car was amazing. We had a really good day. Altitude was good and the help from the doctors worked, so I think it was my best stage today.”

Just behind the pair were Stephan Schott (GER) and Paulo Fiuza (POR) in 16th who now move to 14th place overall.

Unfortunately, X-raid Team’s Yazeed Al Rajhi (KSA) was forced to withdraw today after severe altitude sickness made it impossible for him and co-driver Timo Gottschalk (GER) to continue in the #306 MINI John Cooper Works Rally car. “I already felt bad prior to the start but it goes without saying that we started into the special stage, nevertheless,” Al-Rajhi revealed in the bivouac. “But with 190 kilometres covered we stopped and I had a rest for a while. Nonetheless, the headache got worse and worse and so I opted for retiring from the special stage. But now I already am feeling far better again.” The pairing completed yesterday’s stage, ending in San Salvador de Jujuy, in sixth place overall and showed great promise for a strong result in what is, arguably, the world’s most challenging endurance race.