There’s no nice way to put it. February was brutal to MINI USA. Sales dropped 24% compared to 2016. This is in a total light vehicle market that overall was down only 1.1%. To rub salt into the wound, Matt’s MINI Index was up almost 7% Heck, if Fiat had sold 9 more cars or MINI 9 less, the two brands would have delivered the same number of units! The only bright spots are the Clubman and the Convertible. Even the Countryman sales tanked, shipping less than 200 units for the month. 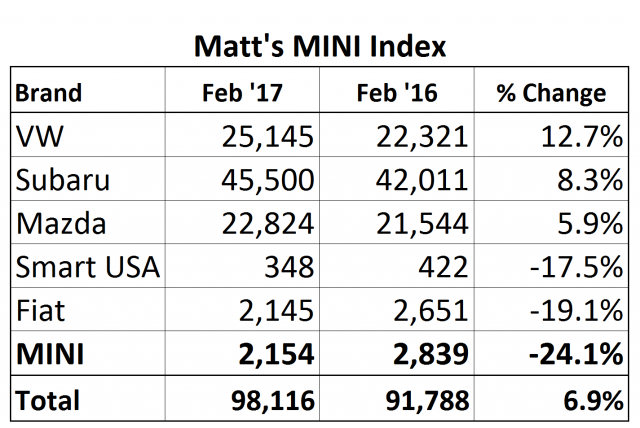 Yes, the new Countryman should help sales, but this month hurt. It had seemed that MINI had stabilized at a smaller, but consistent volume. In January, MINI’s US dealership group thought brand awareness was lagging. Just over a week ago, there was a shake-up in Marketing. We said we didn’t know what was behind the move at the time. February’s numbers provide a very good explanation.

What do you think? Will changes in marketing increase sales? Will the new Countryman save MINI’s day? Sound off in the comments!

MINI USA Sales Up 4% for May