With one stage to go MINI is leading the 2017 Qatar Cross Country Rally with three MINIs in the top five. Here’s the executive summary: 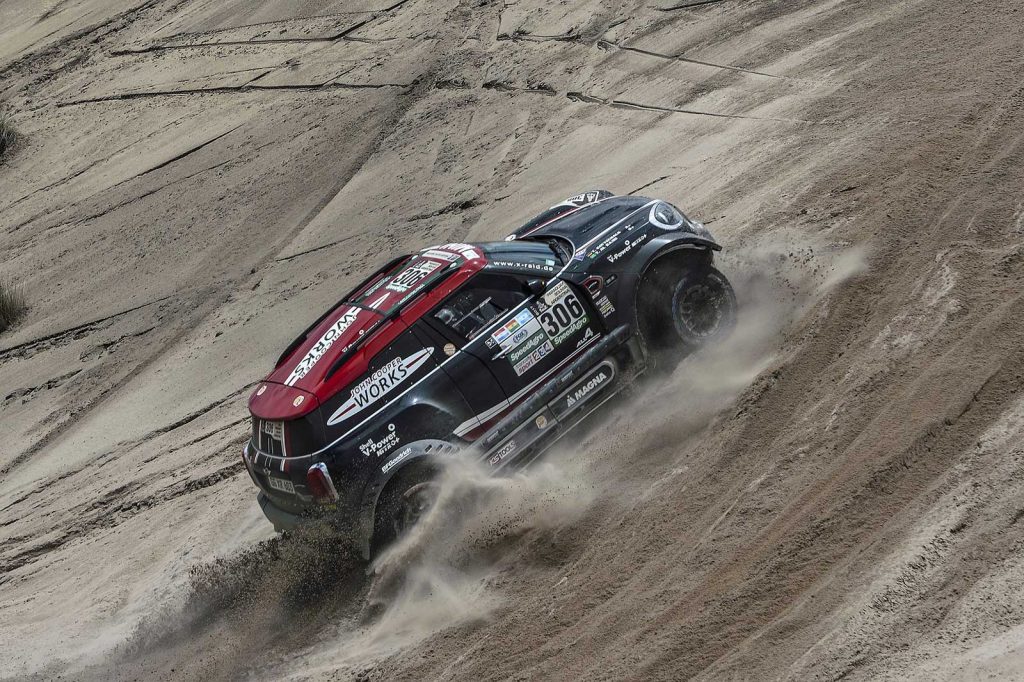 Official Release: MINI leads the way after Special Stage 2 at the 2017 Qatar Cross Country Rally. A stage win for Jakub ‘Kuba’ Przygonski (POL) and Tom Colsoul (BEL) in the #214 car sees the pairing at the top of the overall standings in their first race on the 2017 FIA Cross Country World Championship calendar. Fellow MINI competitors Yazeed Al Rajhi (KSA) and Timo Gottschalk (GER) in the MINI John Cooper Works Rally are in second position, just 1:25.00 behind the leaders, with the third crew of Mohamed Abu Issa (QAT) and co-driver Xavier Panseri (FRA) in the second MINI ALL4 Racing also sitting inside the top five.

The MINI contenders dominated proceedings at the desert event with Abu Issa remaining in third position, behind Przygonski and Al Rajhi, for the majority of the day’s racing at his home event. However, a puncture later on in the stage saw the #206 car drop back to fifth position at the finish line.

Przygonski: “Today was the first real and long stage and it was really, really good for us. Tom and I knew we could win the stage. The navigation was difficult and we had some dunes towards the end, but we passed some other cars and it was some really nice racing. I am very happy. Tomorrow will be difficult because we have to open the stage. We need to stay focussed.”

Al Rajhi: “It was a good start, despite a few problems. We had one small mistake with the navigation, but second place is good for me and we have a good starting position for tomorrow.”

Abu Issa: “In yesterday’s super special stage, I really tried to push. The navigation of today’s stage was quite tough, but we did well. Our pace was quite good. For 70% of the stage we were 3rd overall but then I had a puncture and this costs us three minutes.”

MINI USA Sales Up 8.3% for the Best September Ever

Worldwide MINI Sales Down 2.7% for July