It’s been another difficult month for MINI in the US. With sales off over 11% in May compared to last year, it wasn’t a good month at all! Especially when the overall US light vehicles sales were basically flat (down 0.5%). It’s no wonder that MINI is making moves: A new head of design; 2 MINI veterans promoted; 5th superhero to be an EV; rewarding dealerships for selling more used cars; and they lost their add agency! But it takes time to change course, and enough hasn’t passed to reverse the trends in MINI sales. We find it a bit puzzling that MINI is having another record year world wide, with month after month of bad news here in the US. 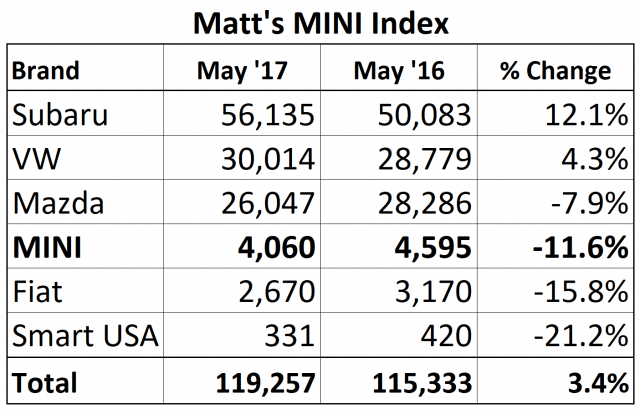 Matt’s MINI Index shows things could be worse: just look at Fiat and Smart! But we don’t think anyone and MINI wants to the marque to be in the same sentence with those two brands.

Within the MINI itself? The 2-door hardtop was basically flat, selling 9 more units. The Countryman shows some growth, up 5.7%, but Clubman sales were down almost 28%! This is especially surprising as X1 sales were up 12.6% and one can make a convincing case that the Clubman is a better X1 than the X1 is. Obviously, MINI has a lot of work to get done.