Wow. Just wow. This is the MINI JCW GP Concept and it’s MINI like we’ve never seen the brand before. The all new JCW GP Concept car is a brash and extremely aggressive take on MINI’s ultimate performance car. But is this a concept or a preview of what’s to come? 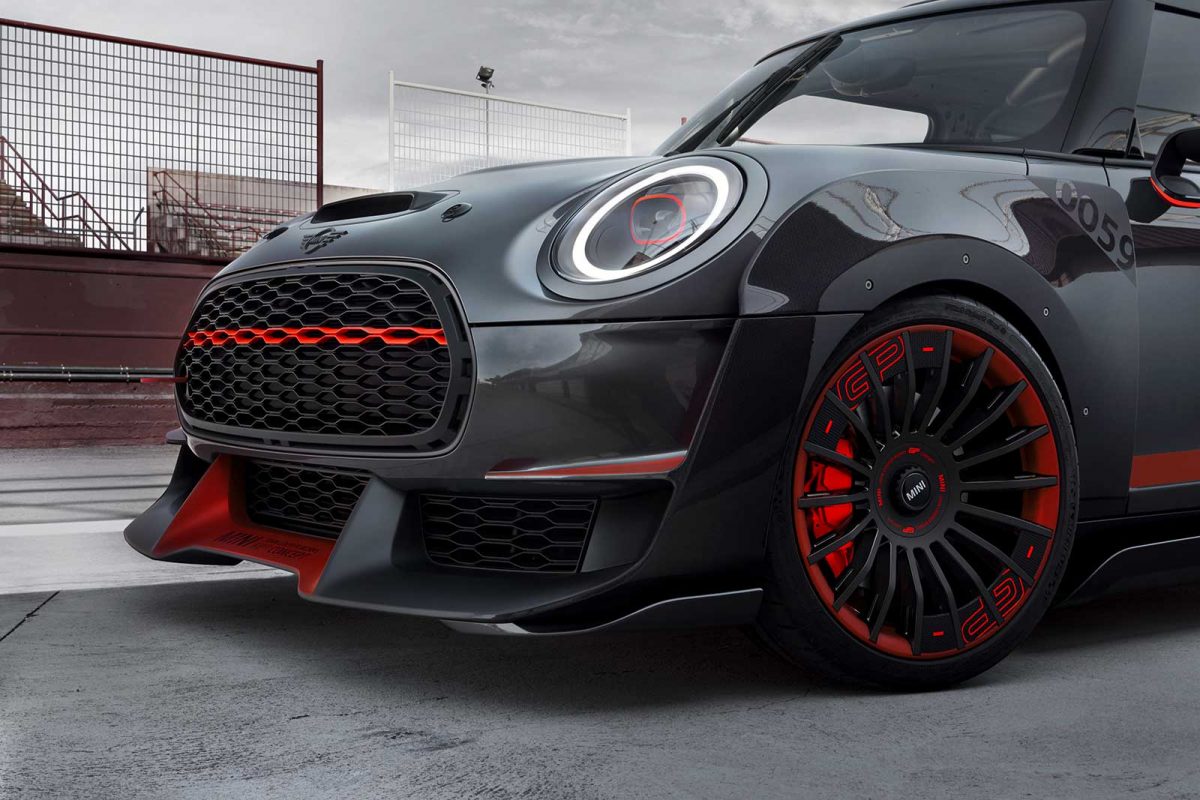 The short answer is both. But more than anything this serves as a preview of what will be MINI’s most aggressive JCW GP to date.

But lets start with what we have in front of us. There are so many things in this concept that it’s hard to know even where to start. For one we see several cues to MINI’s upcoming 2018 refresh (LCI) in the front lights. Not the red mind you but the trim details are noticeably different and a bit more clean in their design approach – something we’ve been told to look out for. But what really stands out here is the over the top aggressiveness that MINI Design has use to convey the abilities of the forthcoming GP. And yes, it is forthcoming. A toned down but still rather aggressive GP should emerge in late 2018 s a limited edition halo model.

We’ve expected front wheel drive all along with power over 250 hp. But with this much aggressive styling and engineering put into this concept, we can’t help but wonder if MINI has something a bit more dramatic up their sleeves. We’ll have much more on the new concept in the coming days and week. Until then check out the gallery and the full release below. 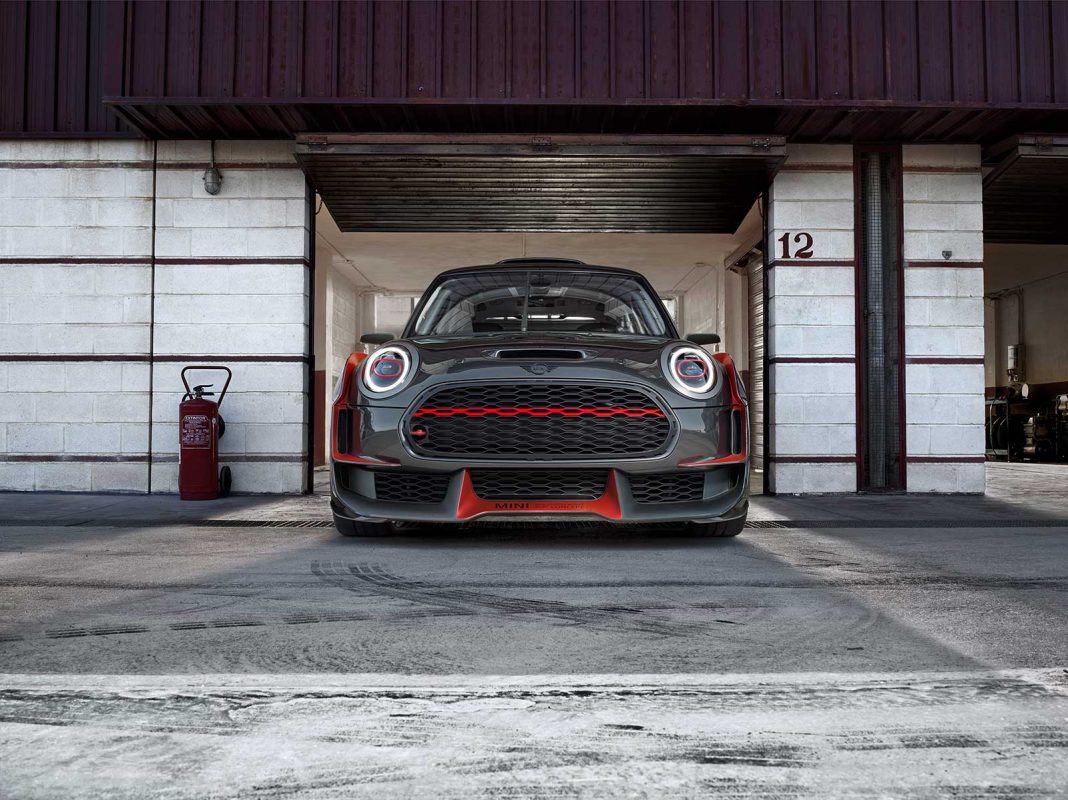 The BMW Group has chosen the IAA Cars 2017 show in Frankfurt a. M. to present the modern racing essence of a MINI – in the shape of the MINI John Cooper Works GP Concept. Inspired by the carmaker’s legendary triumphs in the Monte Carlo Rally exactly 50 years ago, this design study embodies undiluted dynamic flair and the ultimate in driving fun – on both the race track and the road. The concept car picks up the baton from the 2012 MINI John Cooper Works GP and 2006 MINI Cooper S with John Cooper Works GP Kit. Produced in strictly limited numbers (2,000 examples each), these two models explored the outer limits of their performance capability at the time.

“The MINI John Cooper Works GP Concept is all about the unfettered feeling of driving and levels of performance found in motor sport competition,” says Peter Schwarzenbauer, Member of the Board of Management of BMW AG, responsible for MINI, Rolls-Royce and BMW Motorrad. “This is driving fun in its purest form.” 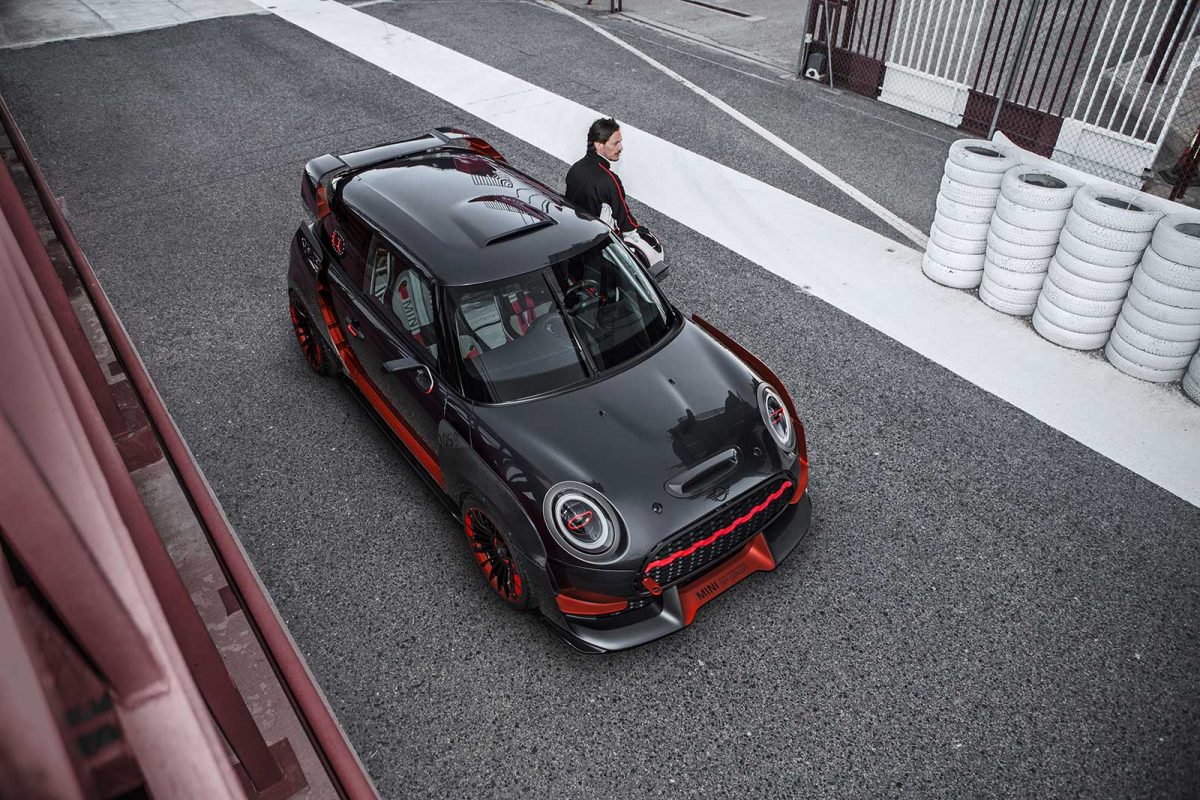 The design of the MINI John Cooper Works GP Concept majors on purity and emotional richness. Significantly wider than the current MINI, the design study exudes dynamism and power. Large front and rear aprons, side skirts and a prominent roof spoiler create a confident appearance. The use of lightweight materials such as carbon fibre optimises the car’s power-to-weight ratio. And evenly balanced weight distribution is a ticket to MINI’s signature go-kart feeling.

“If you know about MINI, you’ll be aware of the brand’s long and successful history in motor sport,” says Adrian van Hooydonk, Senior Vice President BMW Group Design. “The MINI John Cooper Works GP Concept brings together the full suite of defining MINI design features and showcases them at their sportiest and most exciting. What we’re looking at here is maximum performance, maximum MINI.” 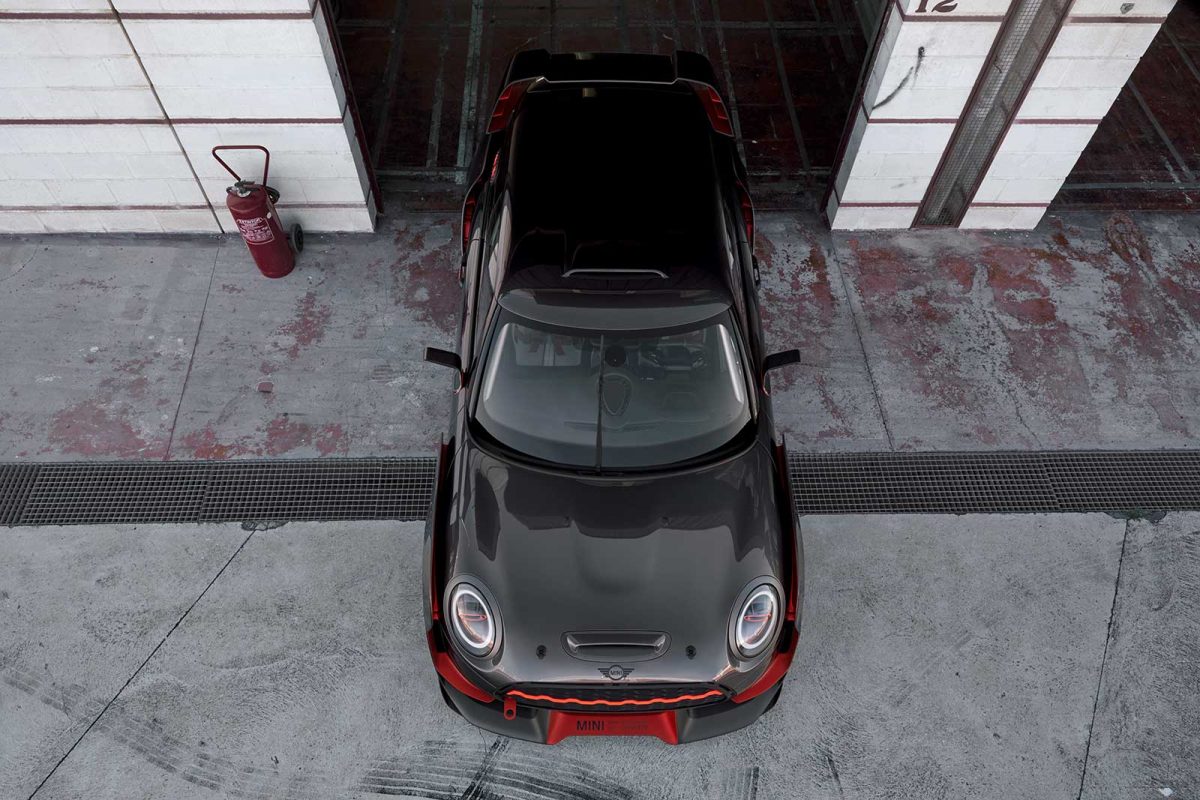 Large air intakes and precisely moulded air deflectors dominate the front end,, which cuts a low – to – the – road figure . Crisply cut add – on elements frame the smooth MINI silhouette and highlight the track focus of the MINI John Cooper Works GP Concept when viewed head – on . The space between the main body of the front end and the air deflectors further strengthens the car’s presence . The familiar colour contrast s of John Cooper Works models come in the form of the Black Jack Anthracite exterior paint finish – which shimmers between grey and black – and the accent colour Curbside Red metallic (a matte red shade ) . Curbside Red metallic provides a fresh take on the classical John Cooper Works r ed and visually accentuates the optimized geometry of the performance and add – on parts .

At the centre of the front end,, iconic MINI design cues such as the elliptical headlights and hexagonal radiator grille sharpen the car’s identity and recognizability factor . At the same time,, elements such as the power-dome with prominent air scoop in the bonnet and the hexagonal honeycomb radiator grille and air intakes in the front apron heighten the car’s sporting appearance . Further color accents in Highspeed Orange enhance the visual impact of the headlights and air intake .

The lower edge of the large front apron reaches down close to the road,, appearing to suck the front end towards the asphalt , while t he car’s wide track and prominently flared wheel arches promise top – level handling and high cornering speeds . Another technical highlight is the front apron ’ss all – carbon – fibre construction,, which reduces the car’s weight . The carbon matting is now directly visible and presented with a high – gloss paint finish with red hexagon graphic . 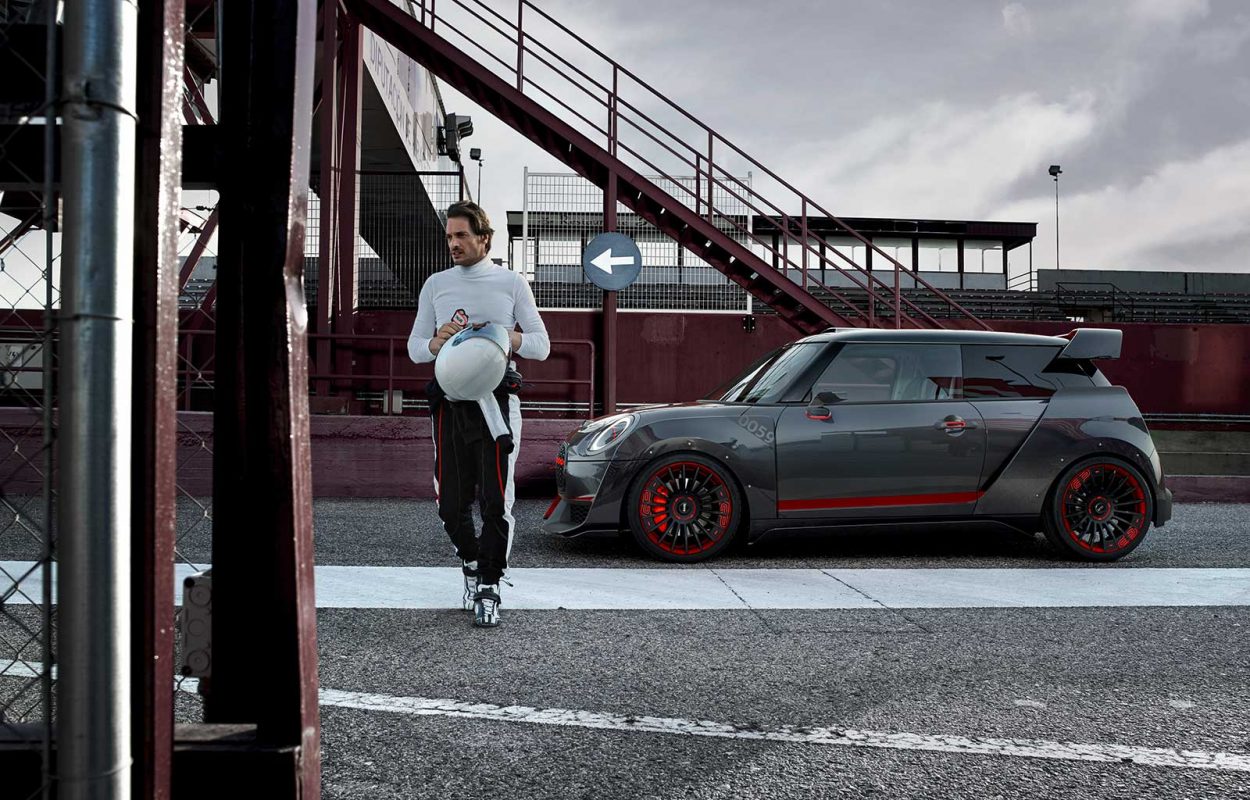 In time – honored MINI fashion , the interplay of narrowing windows and a rising shoulder-line creates a wedge shape from the side and give s the car the appearance of powering forward even before it turns a wheel . Lower down,, voluminous surfaces fuse into a muscular body and endow the flanks with agility and dynamism . The car number 0059 refers to the year the classic Mini was born : 1959..

Carbon-fibre side skirts provide the body with its lowest edge. 19-inch Racetrack lightweight wheels in classical multi-spoke design underline the design study’s performance aspirations. Contrasts in Curbside Red metallic – together with the Highspeed Orange on the inside of the rims – and the GP logo bring extra verve to the wheel design. Elsewhere, Curbside Red metallic and Highspeed Orange bring neatly judged highlights to the exterior mirror bases and door handles respectively. 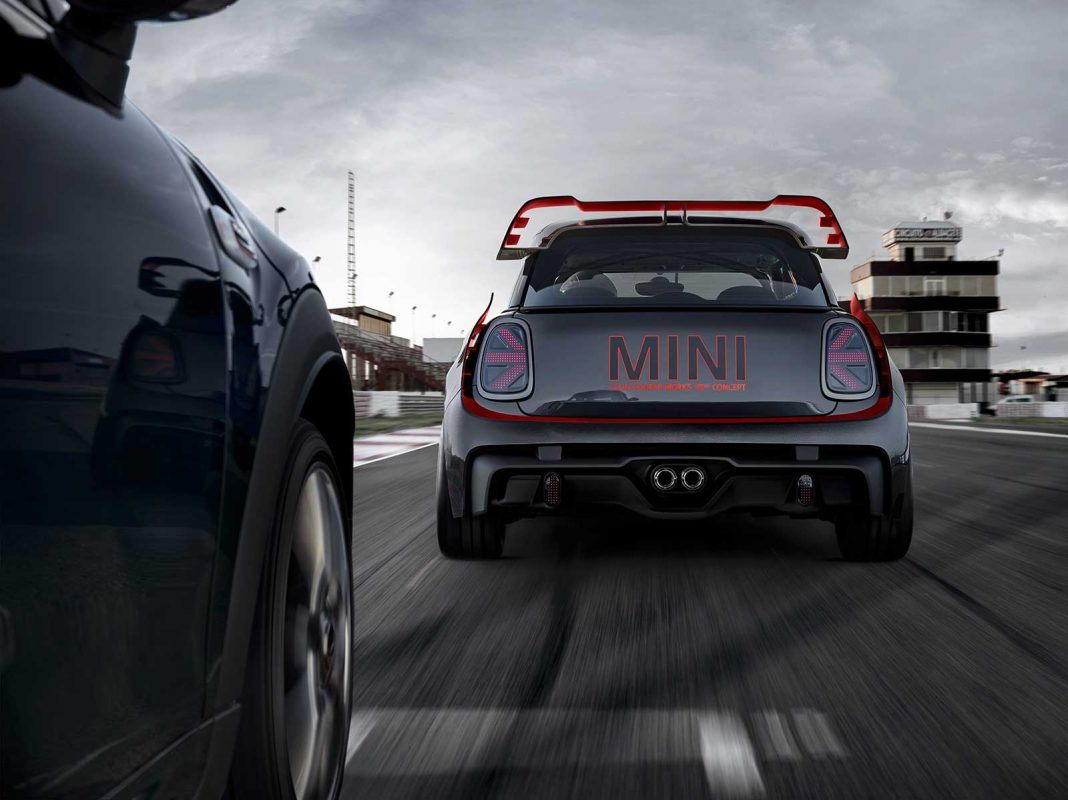 The rear of the MINI John Cooper Works GP Concept picks up the striking use of forms in the front end and flanks. Here again, large surfaces are bordered by precisely formed air-channelling elements, and the positioning of the LED rear lights well to the outside of the rear underscores the car’s dynamic focus. Sophisticated touches, such as the half-Union Jack on each side, represent a nod to the concept car’s British origins, while also providing a sporty, technical flourish. The prominent roof spoiler is a visual statement of intent and slots cleanly into the geometry of the side elements.
Like the front end and flanks, the lower section of the car has a very precise and dynamic design. Carbon-fibre air vents and air deflectors are in optimum positions, and the two rain lights at the outer edges at the rear improve visibility in wet races. The classical central twin tailpipes low down at the rear embody the John Cooper Works DNA to eye-catching effect. 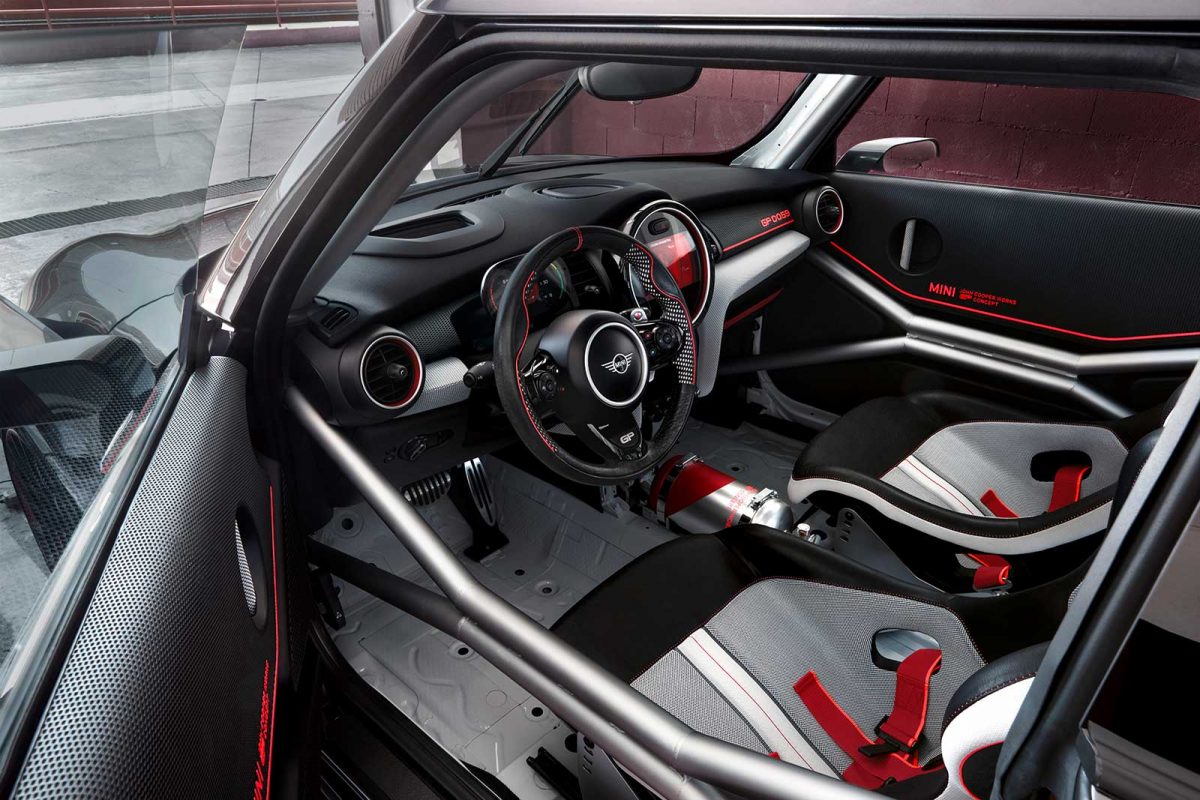 The interior – stripped down and with track-inspired looks

The interior of the MINI John Cooper Works GP Concept is pared back to its core elements, its roll cage joined on board by little more than a pair of low-mounted bucket seats with five-point belts and a cleanly-designed instrument panel. Gearshift is by paddles on the steering wheel.

All the elements of the interior are trained squarely on the driver. The display and control concept with digital instrument cluster and Head-Up Display places the relevant information for the situation at hand directly in the driver’s eye-line, allowing absolute focus on the road to be maintained. Interaction between driver and car is otherwise digital, notably touch-control adjustment of suspension settings in MINI’s familiar central instrument. As digitalisation dictates, the display here is now in large-screen format. It is left to the large emergency cut-off button and the traditional MINI toggle switches with start/stop button to provide a bridge between the digital and analogue worlds. 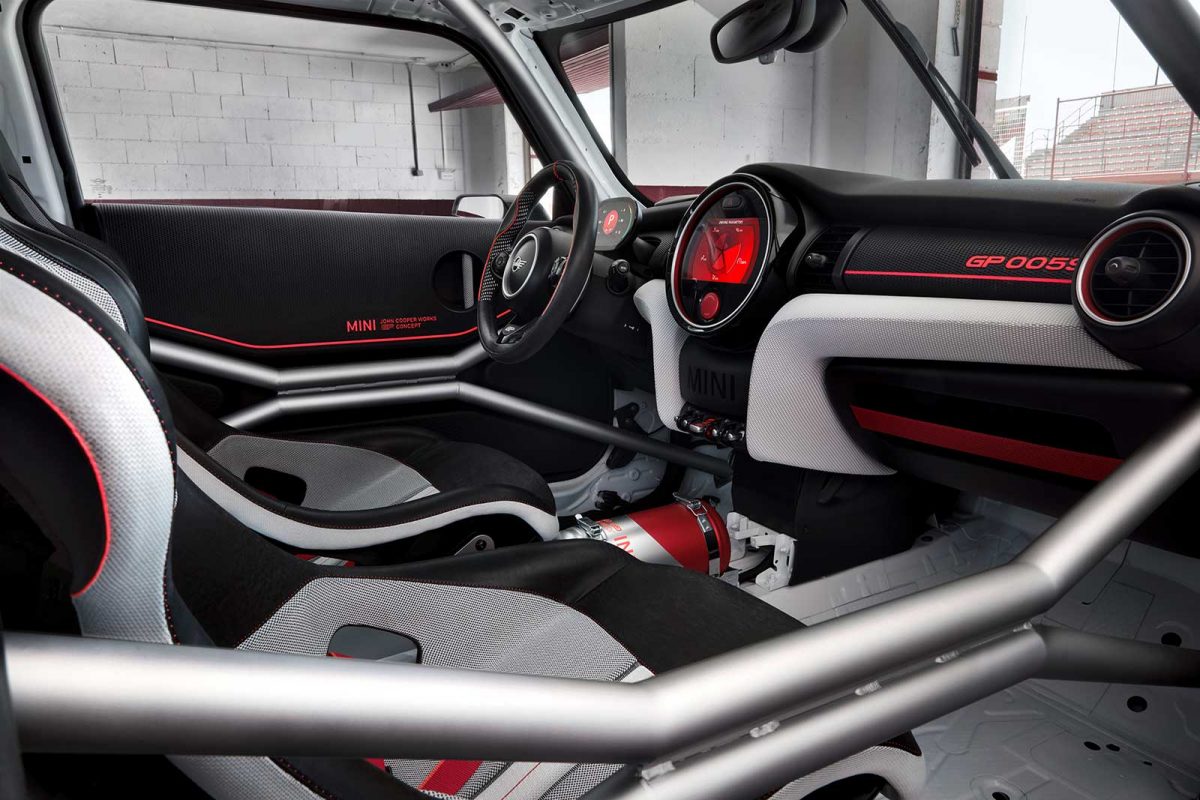 A rear seat bench, headliner and conventional door trim panels are conspicuous by their absence, sacrificed in the interests of weight minimisation. Instead, the surfaces between the elements of the roll cage and the rear compartment are trimmed in lightweight panels with textured details and a hexagonal pattern. This creates a transition between the unadorned rear and more design-rich front cabin.

The doors are opened using recessed grips with fabric straps, leaving the driver and passenger to clamber out through the roll cage in the usual racing car style. 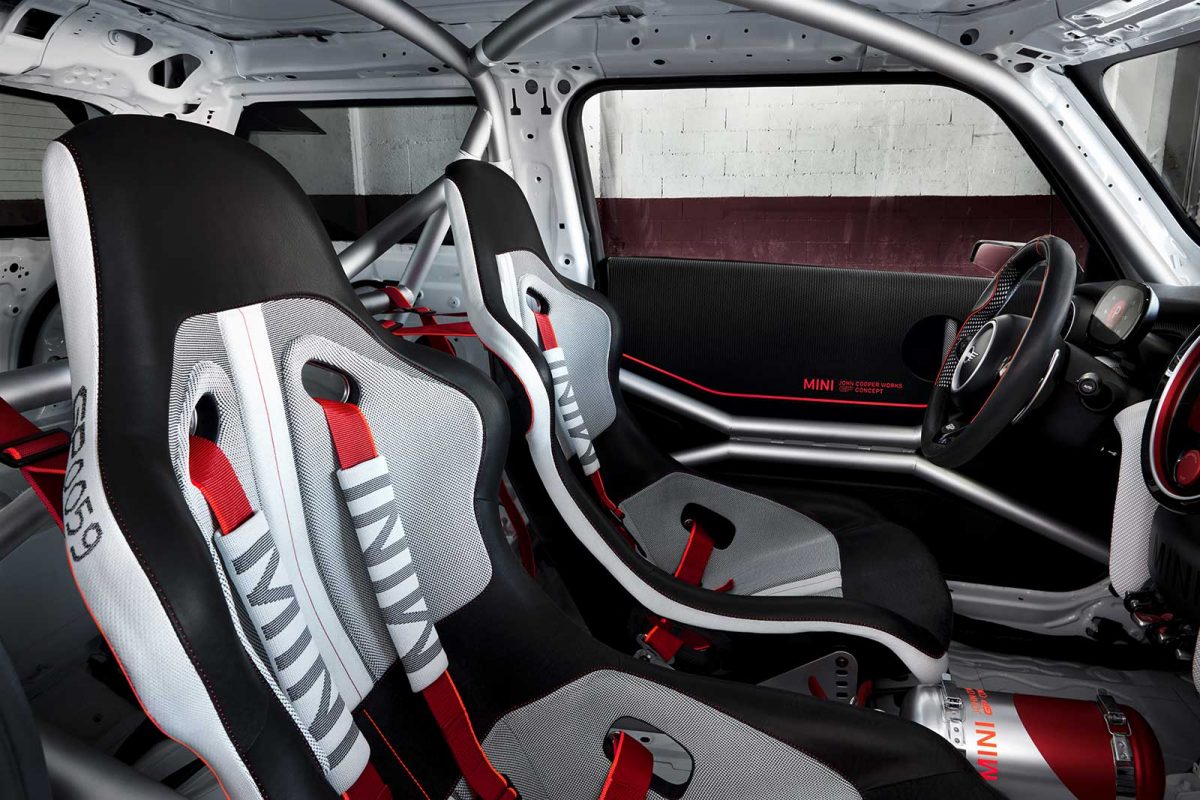 The interior combines its pared-back sporting forms with eye-catching elements and bold colour accents. The result is a face-off between the less familiar aesthetic of a racing-car bodyshell and the exclusivity of high-quality production-car appointments. Against the backdrop of the white basic space, black, patinated smooth leather on the head restraints and bolsters provides a neat contrast with the back-and-white knitted textile in the central section of the seats. A new 3D knitting technique gives a classy and modern feel, while red accents send out a visual statement. The bright, aluminum roll cage also stands apart clearly from the black 3D-printed parts in the doors and instrument panel, and a lightly-structured trim element with hexagonal graphic reinforces the sporty, modern look. Curbside Red metallic adds a colour accent to selected functional components, while the Highspeed Orange shade in details like the belt straps, inscriptions and the stitching of the steering wheel and seats acts as a second accent colour to complement the red. With 3D printing and 3D knitting techniques, MINI is bringing technologies to the interior of the concept car which will enable both tool-free production and simple personalization in the future. 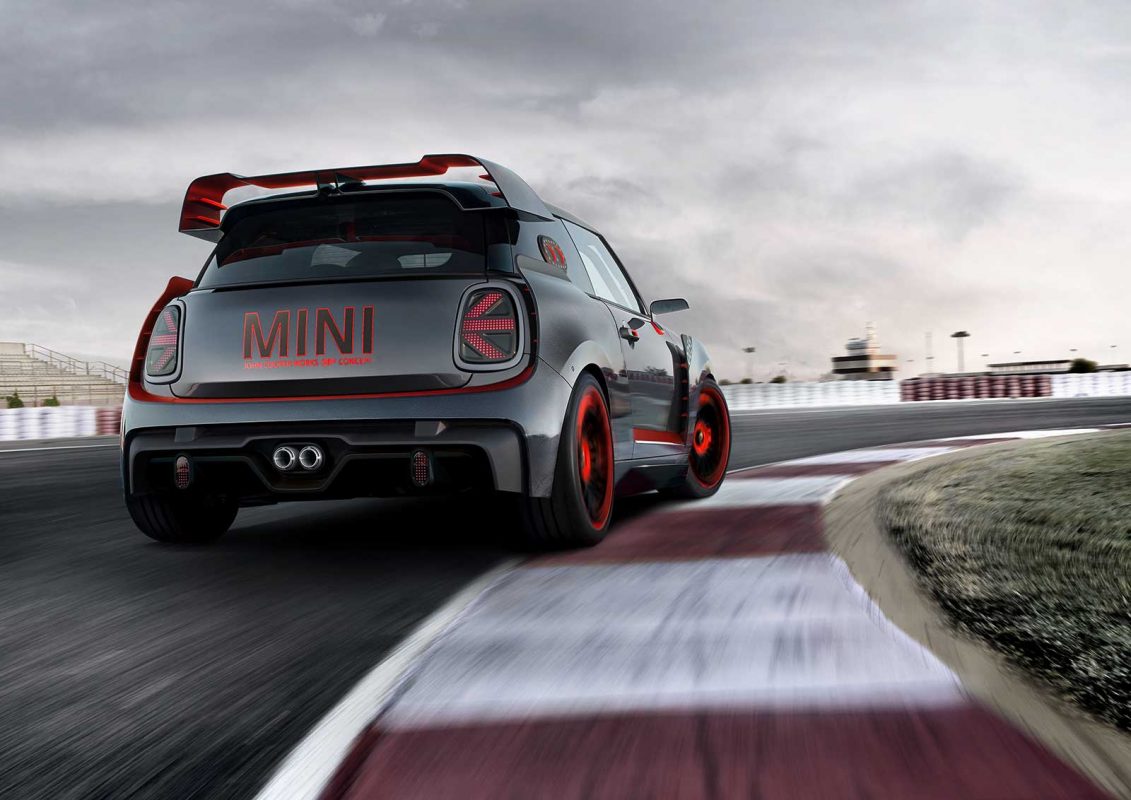 The character of the MINI John Cooper Works GP Concept is defined by a motor sport heritage which stretches back over more than five decades. Indeed, the classic Mini was transformed by legendary sports car designer John Cooper into a byword for driving fun on the road and an extraordinarily successful competitor in the race and rally scene. A motor sport career which began exactly 50 years ago reached its zenith with three overall victories in the Monte Carlo Rally. Today, the John Cooper Works name is synonymous with products and models whose quality is rooted in established motor sport know-how and an association with the British premium small car which dates back all those years. The result: the motor sport experience comes roaring into everyday life.