Official release: Woodcliff Lake, NJ – January 5, 2018 – MINI USA today announced the official route for MINI TAKES THE STATES (MTTS) 2018. The legendary rally for MINI owners, which runs from July 14 – 22, will start from two separate locations on opposite sides of the country and meet in the middle for a weekend celebration of everything MINI. The starting cities will be Orlando, Fla., and Portland, Ore. The final destination is Keystone Resort in Keystone, Colo., approximately 75 miles west of downtown Denver. Once arriving at Keystone, MINI owners from both routes will have the weekend to trade stories, share their experiences, show off their MINI, explore the area on curated mountain drives, support our charity partner and enjoy fun activities planned by the MINI USA team. 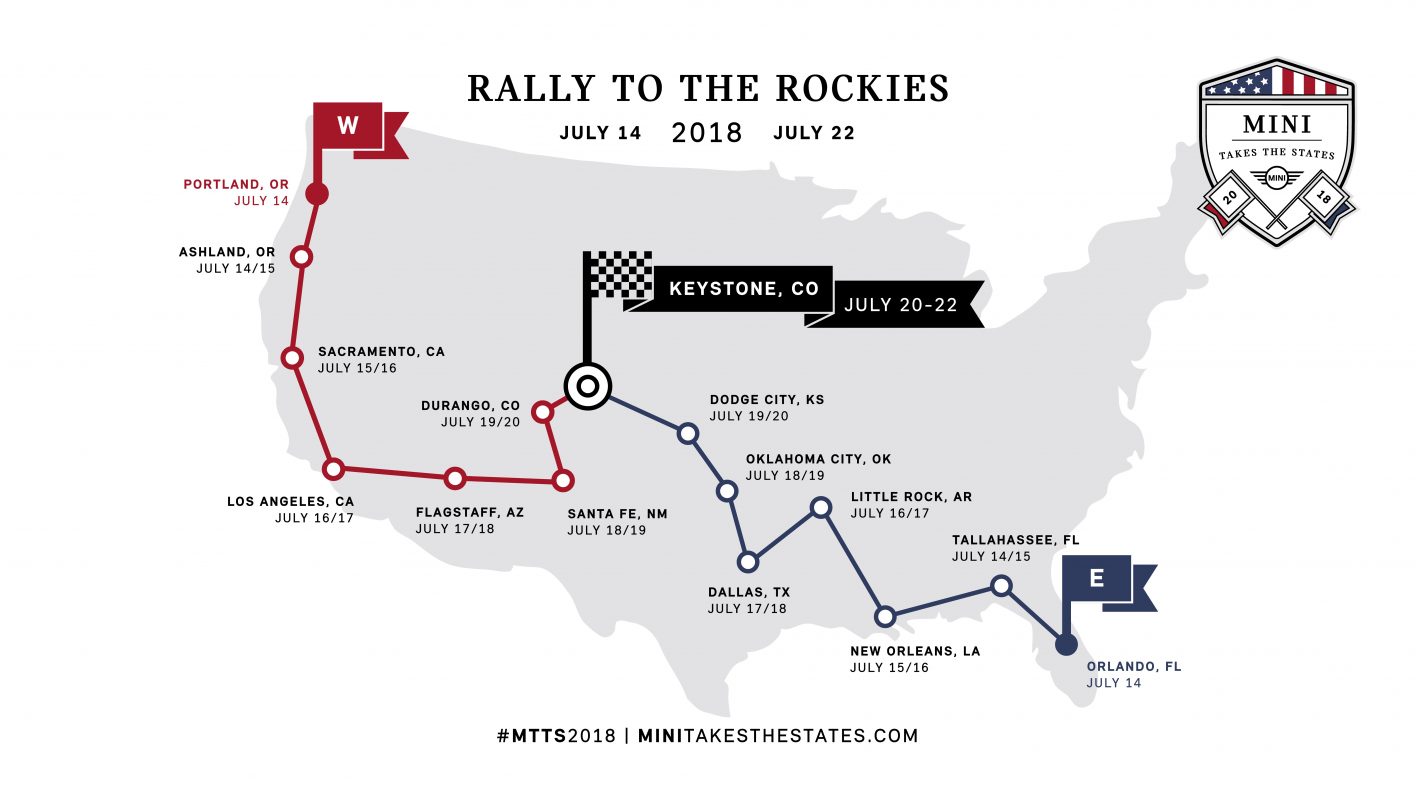 There have been six epic road trips starting with the inaugural rally in 2006. The seventh biennial MTTS rally will travel through America’s scenic backroads and byways, offering MINI owners the ultimate opportunity to enjoy the legendary go-kart handling with thousands of likeminded MINI owners while taking in some of the best scenery our country has to offer. In true MINI TAKES THE STATES fashion, these routes will not take a direct path but rather focus on state and county roads as they make their way across the country.

“MINI TAKES THE STATES is the ultimate road trip and we’re excited to share this adventure with MINI owners from all over the U.S.,” said Thomas Felbermair, Vice President MINI Americas Region. “This will be my second MTTS adventure and although I can only be on one route I am looking forward to meeting up with the rest of the MINI community when we gather to celebrate our MTTS experience in Keystone, Colorado.”

MINI TAKES THE STATES 2018’s eastern route will leave Orlando, making stops along the Gulf Coast in Tallahassee, Fla., and New Orleans, La., before heading north to Little Rock, Ark., and back south to Dallas, Texas. From there the group rallying in the east will head north to Oklahoma City, Okla., Dodge City, Kan., before arriving at the final destination Keystone Resort.

The western route will leave from Portland heading south to Ashland, Ore., just south of Medford. From there, the group of MINIs on the western leg will travel south making stops in Sacramento and Los Angeles, Calif., before heading west to Flagstaff, Ariz., and Santa Fe, N.M. The group will then travel north to Durango, Colo., before making the last leg of the journey to Keystone Resort.

In 2016, MINI owners rallied with a purpose, making an epic 14-day, 4,397 mile adventure that started at Atlanta Motor Speedway on July 9 and ended at The Thermal Club in Palm Springs, Calif., all in the name of raising money to #DefyHunger with charity partner Feeding America. By the time the rally reached the Thermal Club, the group had raised enough money to provide more than one million meals to help people facing hunger easily topping the initial goal of 800,000 meals. The charity partner for MTTS 2018 will be announced at a later date.

MINI TAKES THE STATES 2016 attracted a record 4,000 plus MINI owners with more than 900 owners going “all the way.” At times the group swelled to more than 1,500 owners and 700 MINI vehicles each as unique as their owners.

Registration for MTTS 2018 will open in April. To stay up to date on MTTS news opt in at MINITAKESTHESTATES.com.

MINI USA Sales up 56% for October