The 2018 Dakar is over without the finish MINI would have liked. With the highest ranked MINI team 5th overall the team is already looking ahead to 2019. But before we get there lets look back on the 2018 Dakar – perhaps the toughest race in years.

Official Release: Dakar 2018 is over and, according to some of the MINI competitors, the 40th edition of the world-famous race was the toughest Dakar they have ever experienced. The past two weeks, ending in a short Stage 14 in Argentine city Cordoba today, has thrown many challenges at the drivers and navigators and only 43 of the 92 auto crews that started the race accomplished a Dakar finish. Four of the seven MINI crews entered were among the 43 auto crews who successfully completed what is, arguably, the world’s toughest rally.

The greatest achievement has been that of Jakub ‘Kuba’ Przygonski (POL) and co-driver Tom Colsoul (BEL) who secured a solid fifth place overall in their MINI John Cooper Works Rally (#312). Przygonski’s previous Dakar experience and the misfortune that befell some of his fellow MINI crews in this year’s edition of the race, urged the Polish driver to exercise some caution and take a safe and steady route to the front of the field. His sensible approach paid off with him taking the accolade of first MINI to complete the 2018 Dakar.

A strong Stage 13 yesterday saw Boris Garafulic (CHI) and co-driver Filipe Palmeiro (POR) in the #317 MINI John Cooper Works Rally finish in 7th place to move three places up the general rankings to 13th ahead of the final stage today. A 12th place finish in today’s final 120km special stage ensured the pairing maintained their overall placing of 13th at the race end.

For Mikko Hirvonen (FIN) and co-driver Andreas Schulz (GER) in the MINI John Cooper Works Buggy (#305) yesterday was a fun stage and left them feeling happy ahead of the final stage, even though the end result is not what they hoped for. A 15th place finish today saw the pairing end the race in 19th overall, but in doing so they made Dakar history as the first ever driver and co-driver to complete the race in the new MINI JCW Buggy, which made its debut this year. Hirvonen has been amazed by the buggy’s performance and believes the vehicle is a strong future Dakar contender.

Close behind Hirvonen in today’s stage and final rankings were Orlando Terranova (ARG) and Bernardo Graue (ARG) in the MINI John Cooper Works Rally (#307). A 16th place stage finish in Cordoba saw the pairing remain inside the top 20 at the finish line. It was not the result that local driver Terranova had aimed for, but he is focused now on analysing the data from the race to understand how to improve in future Dakar.

The MINI crews, along with the other competitors, now head to the end of race ceremony to join a huge 40th anniversary party staged by the organisers, which is expected to be attended by thousands of spectators. 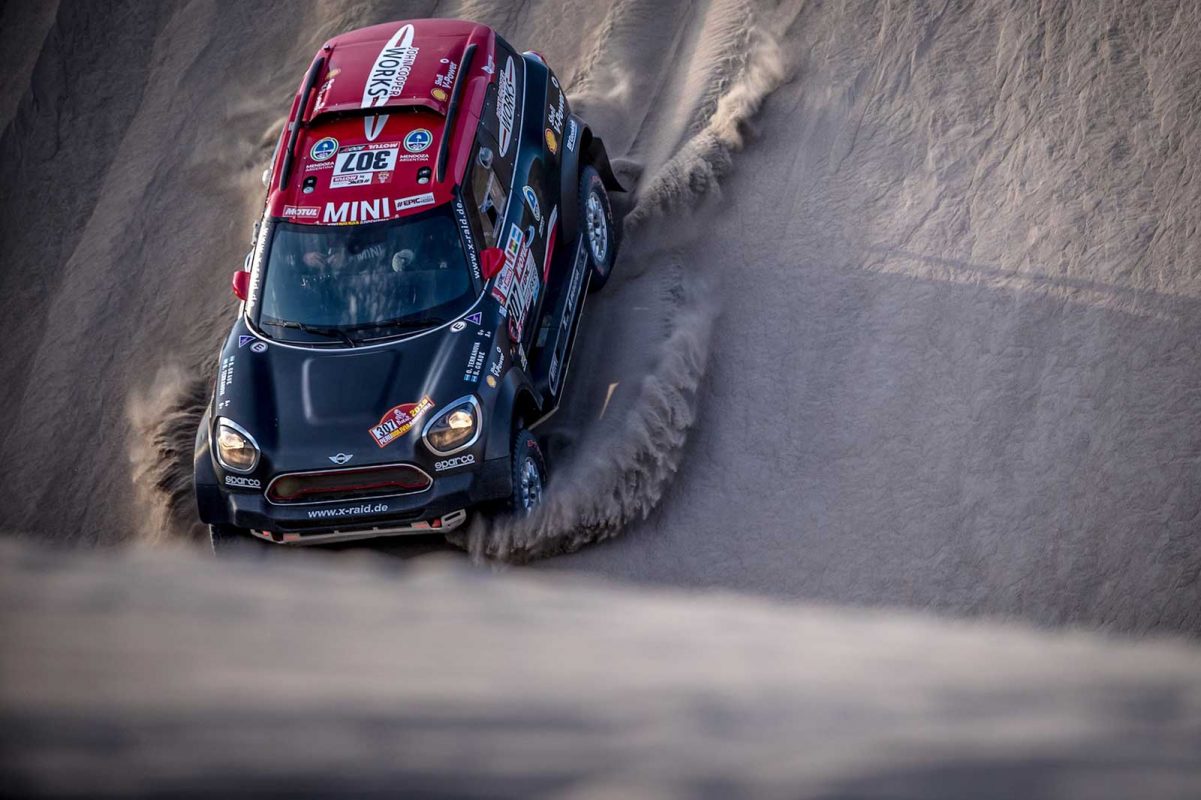 “Congratulations to this year’s Dakar winner, Carlos Sainz. And a huge well done and congratulations also go to Kuba Przygonski and Tom Colsoul on a hard-fought fifth place in the MINI John Cooper Works Rally. We are happy for the team and are proud of this performance. We knew how difficult it would be to make it onto the podium in Cordoba in one of the MINI John Cooper Works this year. Despite the early retirements and setbacks in this particularly unforgiving edition of the Dakar, the X-raid team of Sven Quandt showed great morale, fighting spirit and the team spirit typical of MINI, and refused to be discouraged, even in the face of bizarre racing incidents. Everyone who made it to the finish line at the Dakar deserves the greatest respect. We are looking forward to the next Dakar – we will be taking on this ultimate rally challenge once again in 2019!” 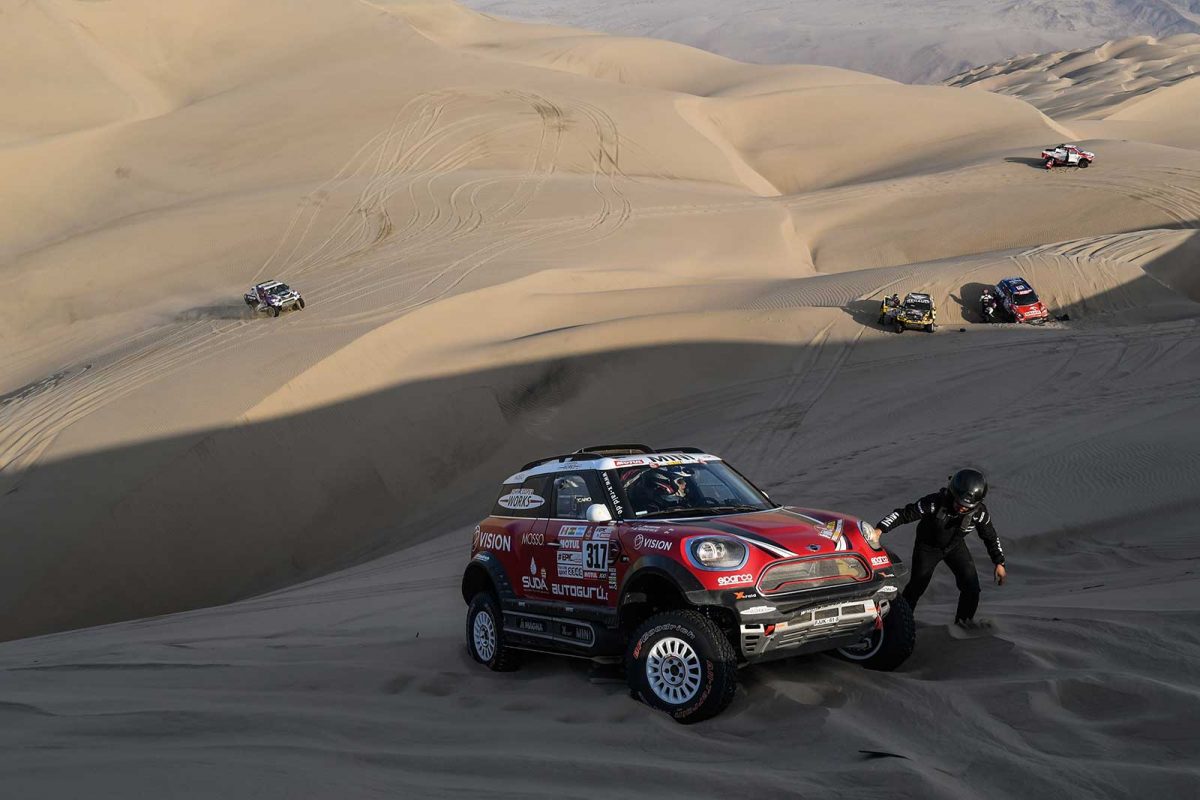 “It was quite a mixed Dakar; from the drivers’ side I think there were unfortunately some mistakes that pulled us back quite a bit, but on the technical side we were astonished. The new MINI John Cooper Works Buggy was really impressive and lasted without any problems. Performance-wise it really showed that this is the right weapon for the future but the MINI John Cooper Works Rally was also good and, until Nani dropped out early due to a big hit in the car, we were in a good position. From a safety side, the cars were incredible; you could nearly make any roll and nobody was in jeopardy. Even if the car was 20 or 40kg heavier it didn’t matter because we had super-safe cars and that’s the most important thing for this race. Kuba did an incredible performance – driving very steady all the way through from the beginning. Fifth place is an incredible result for him. He shadowed the leaders throughout the race, getting closer to the front and nobody was watching him. He and Tom made no mistakes – this is how you do a Dakar.”

MINI USA Sales Down 40% for March While Waiting for F56

A Look Back at the Best MINI April fools Pranks