The season kicks off tomorrow for the MINI JCW Team at Daytona. You can watch it live via the IMSA app AND ON THE IMSA website.

Official release: The MINI JCW Team and MINI USA will start their fourth full season in the Street Tuner class of the Continental Tire SportsCar Challenge series this weekend at the famous high banks of the Daytona International Speedway in Daytona Beach, Fla. The MINI JCW Team kicked off last season by showing the rest of the field that they were a force to be reckoned with after Mat Pombo and co-driver Derek Jones drove the #73 MINI JCW to victory lane at the track known as the “World Center of Racing.” 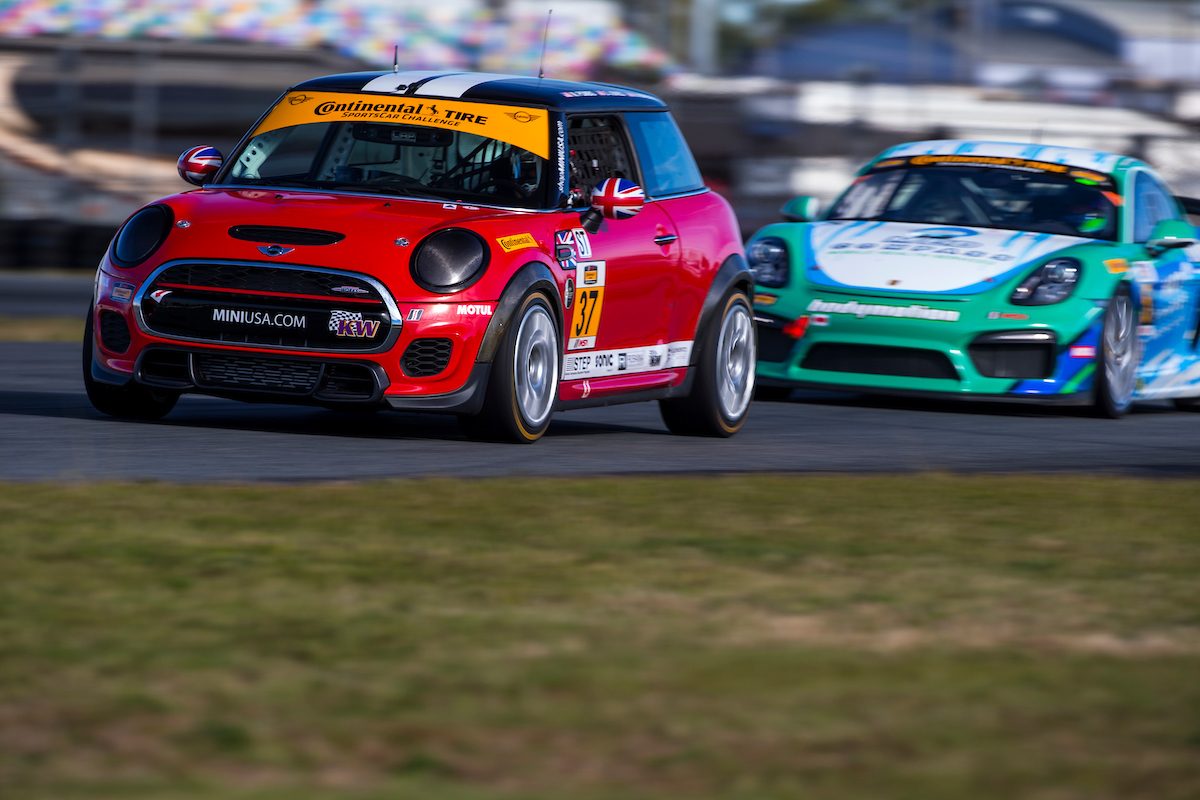 The big news for the MINI JCW Team this season is the shuffling of drivers that took place during the offseason. The #73 MINI JCW will now be piloted by 2013 ST Driver Champion Mike LaMarra and Mat Pombo. Nate Norenburg will qualify and start the #37 MINI JCW with Derek Jones finishing the race. These two driver pairs are set for the year hoping to build chemistry as the season progresses. The #52 MINI JCW will be driven by a three-man team at Daytona. Jay Salinsky will qualify and start the car, with Tyler Stone taking the wheel for the middle of the race and Mark Pombo closing out the four hour endurance race. Mark Pombo will be in the #52 MINI JCW for the season and will rotate through a number of co-drivers.

“We are really excited about the upcoming season,” said Luis Perocarpi, team owner, LAP Motorsports. “Our test sessions at the Roar went really well and our driver shuffle strategy will give every MINI JCW the opportunity to get to victory lane and a shot at the series championship at the end of the season.”

The MINI JCW Team recently completed a very successful Roar Before the Rolex 24 test session, which confirmed the work the team conducted during the offeason developing a few technical modifications had improved the vehicle’s overall perofrmance on the track. Mat Pombo had the fastest time in the ST class. Derek Jones was third.

In addition to the 2017 season opening victory at Daytona, all three MINI JCW Team cars had a 1, 2 and 5 finish at Watkins Glen International, with the #73 MINI JCW bringing home the win and the #52 MINI JCW sharing the podium in with a second place finish. Not long after dominating Watkins Glen, the team went on to grab a podium finish at Canadian Tire Motorsports Park in Bowmanville, Ontario. Mat Pombo and co-driver of the #73 MINI JCW Derek Jones finished the season 4th place in the championship standings and the team was third place in the Manufacturer’s standings.

Throughout the entire season, technicians from MINI dealerships all over the country help support the team as part of the MINI Service Technicians Education Program (STEP). This weekend at Daytona the team will be supported by six MINI technicians from area dealers, including three from Tom Bush MINI in Jacksonville and three from Orlando MINI.