The F56 JCW MINI vs the F54 JCW Clubman. Not the most likely adversaries but perhaps the two best performance cars MINI has in its arsenal. They each represent a very different approach to performance. But when pushed to the limits on the track, which is the better JCW? Lets find out. 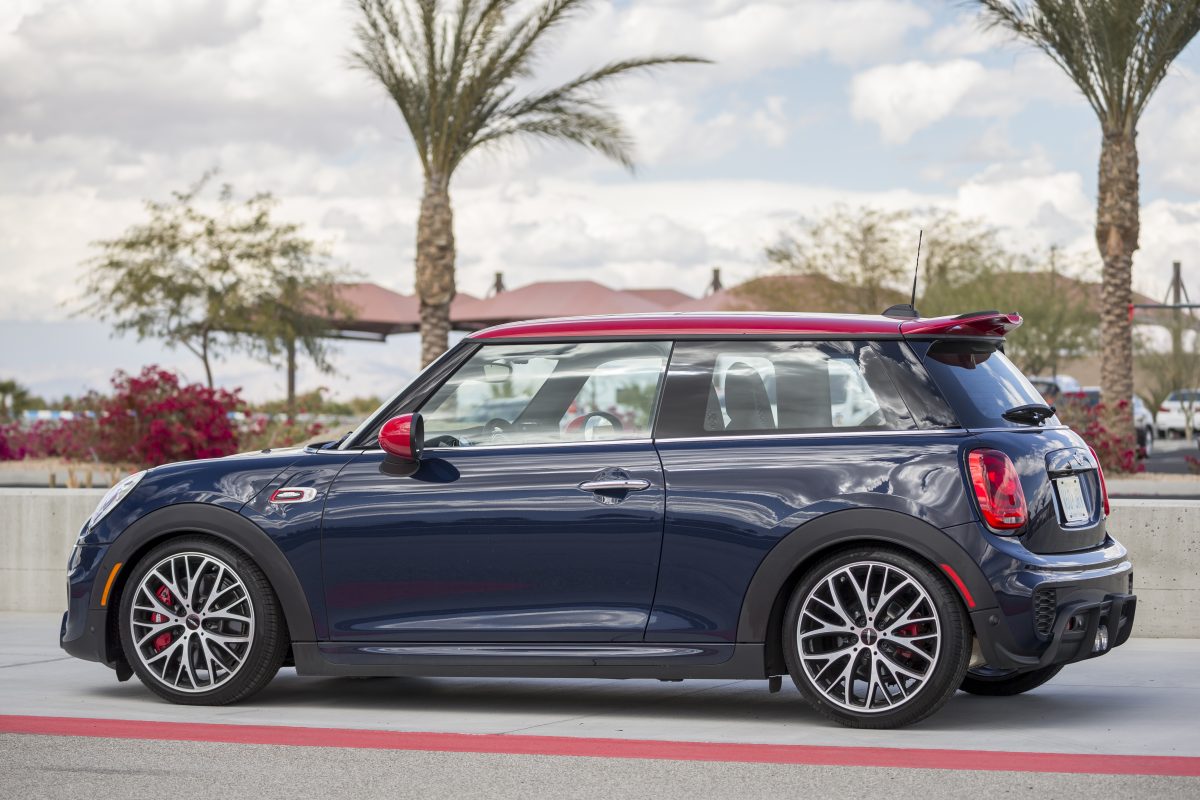 The F56 JCW MINI has 228 hp and 236 ft-lbs moving a scant 2,845 lbs via the front tires. The result is a car that feels quick (5.9 seconds 0-60) and always lively. It’s a car that we’ve tracked for years and always come away loving. The chassis is stiff and the suspension well judged. But this car is a bit different. Shod with the JCW Pro coil-over system it’s hunkered down and decidedly more mean looking than a normal MINI. The only downsid is this particular JCW has been optioned with the good but not great 6-speed automatic transmission. 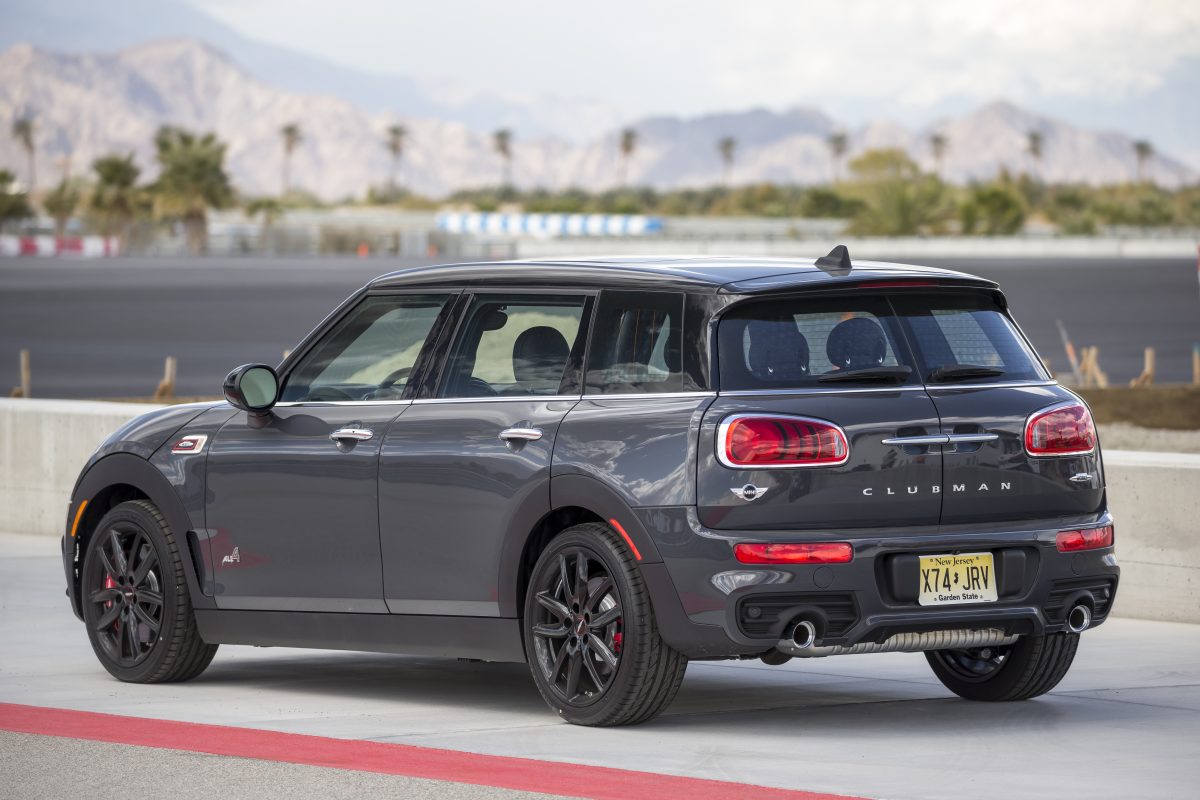 The JCW Clubman also has 228 hp but that’s where the similarities end. The engine has been tuned to produce 258 ft-lbs and drives all four wheels through a modified All4 system. Ironically this is more or less the same JCW Clubman we’ve had as a long term test car for the past 15,000 miles and thus a car that I personally know better than almost any recent MINI. Like the F56, this car is also optioned with the automatic. However unlike the six-speed, this has the decidedly better (smoother, quicker and more efficient) 8-speed automatic. It’s no manual in terms of enjoyment but it’s hard to argue with it’s slightly higher level of performance.

Thermal Race Club is one of those exclusive track clubs that makes you question why you didn’t try harder in school. It’s a millionaire’s playground with 2 million dollar houses literally built into the walls surrounding the track and Italian metal everywhere. There’s multiple race courses and autocross tracks along with go kart tracks and endless swaths of asphalt among the palm trees. The facilities themselves of beyond anything we’ve ever seen at clubs such as New York’s Monticello Motor Club or Chicago’s excellent Autobahn Country Club. It’s also where BMW houses it’s Performance Center West and where it offers the all new MINI Motoring School which we recently had the pleasure of attending. 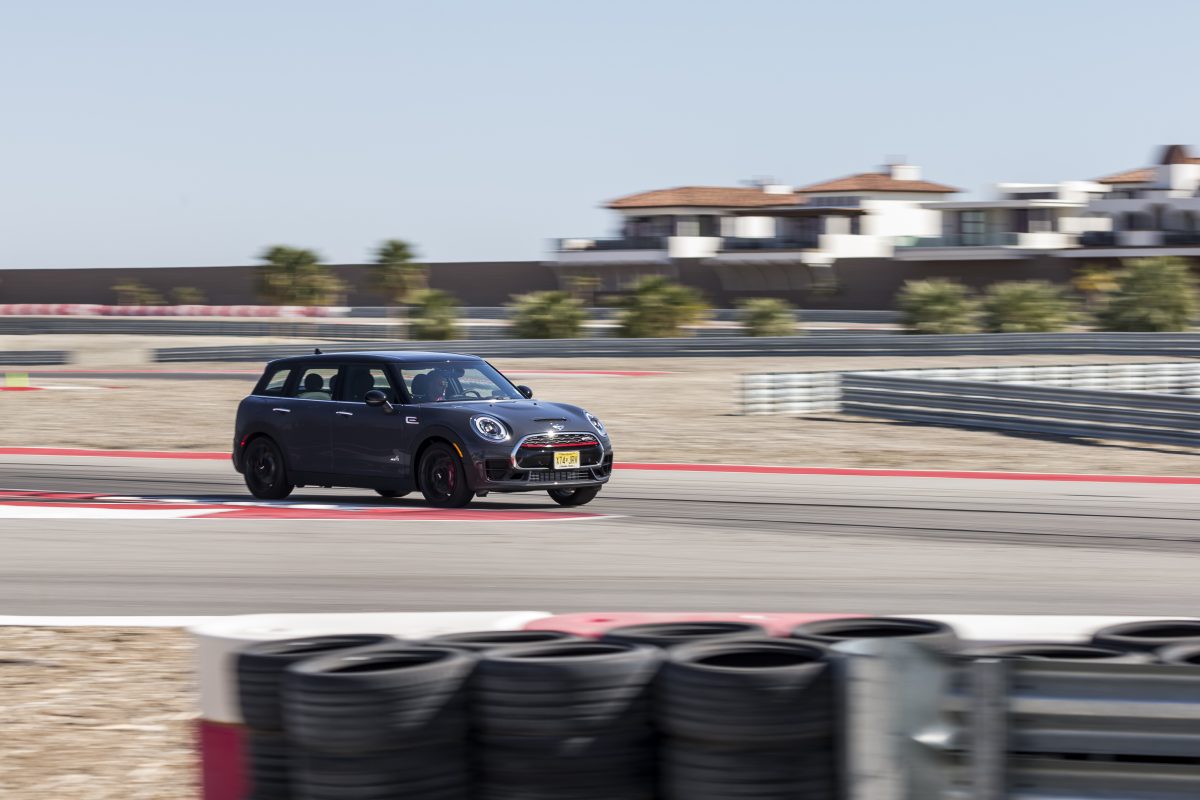 For this test we made use of the Club’s south track – a winding yet quick course that is a fast, technical track. For these MINIs it would expose everything from suspension and braking limits to all-out speed.

Hopping into the Clubman first, we slotted the transmission over to manual and the toggle to sport. Within the first handful of corners the JCW Clubman surprised us with its at the limit handling. Where most F56 MINIs understeer when pushed hard, the JCW Clubman delivered a neutral response at the limit that gradually transitioned into understeer. Easy to modulate, this gave the JCW Clubman a confidence and unflappability that I had never experienced in any MINI. 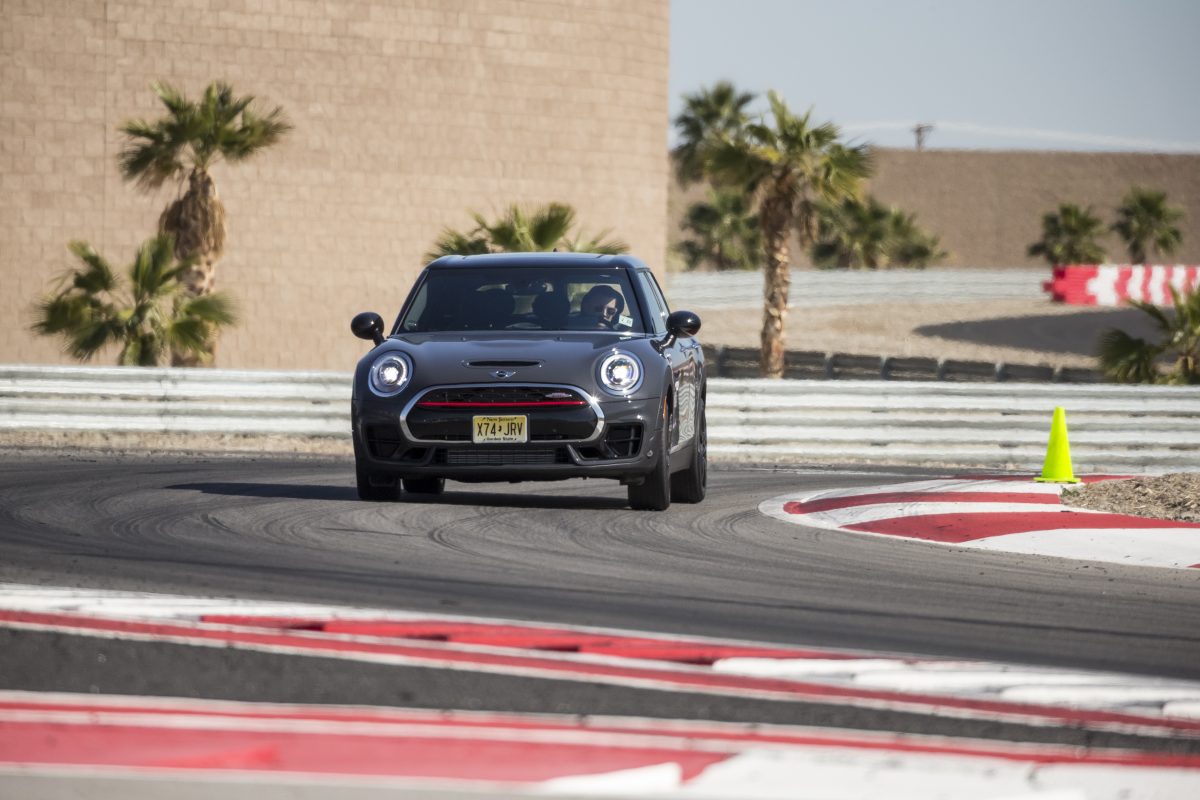 Yet there’s one major drawback to the more neutral JCW Clubman – weight. At 3,486 it’s almost exactly 500 lbs heavier than the F56 JCW MINI hatch. While it could exit corners faster than the F56 (due to grip and torque), the smaller JCW would slowly walk away from it in the long straights.

Moving into the F56 JCW MINI after the Clubman I was immediately struck by height difference. With the JCW Pro Suspension there’s a noticable drop to the already lower F56 that results in one of the best stances in any factory MINI set-up ever. 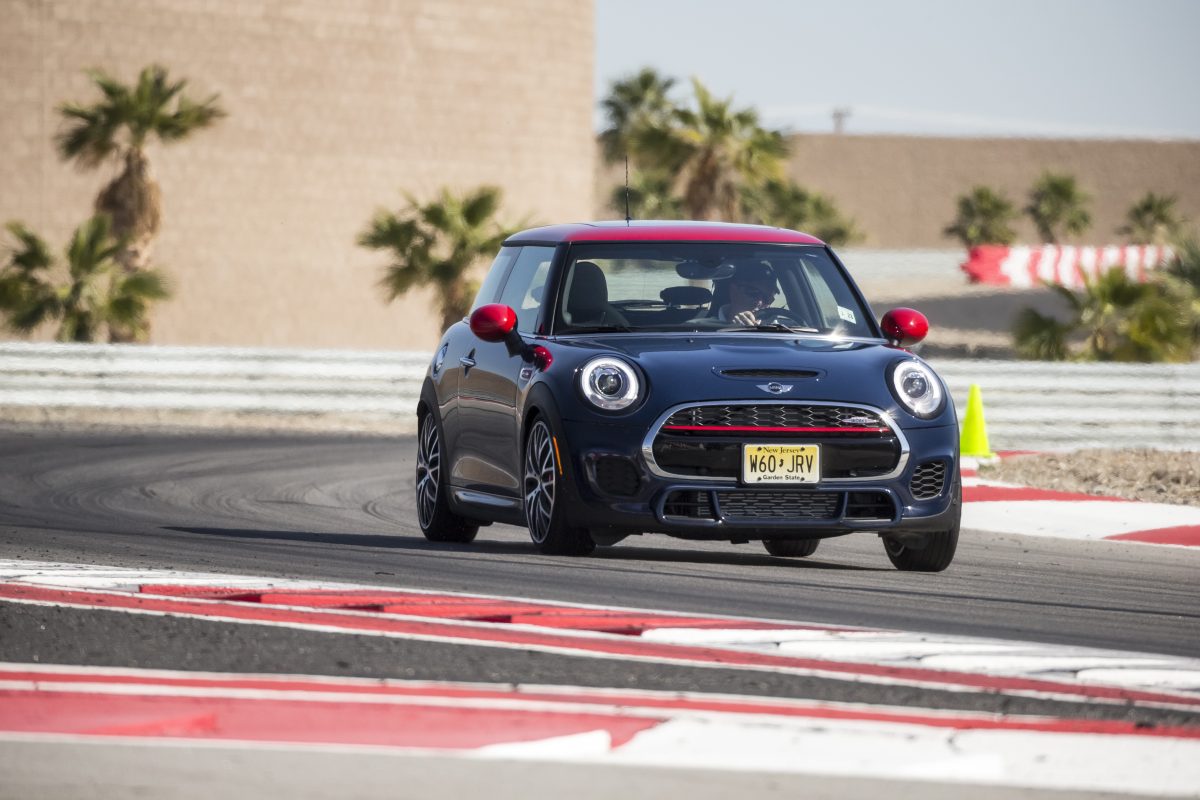 Then I drove it. The turn in, already quick, felt more precise and eager than any F56 I had ever driven. Real world grip was higher thanks to the improved geometry of the suspension and there was a noticble improvement in feedback through the wheel. 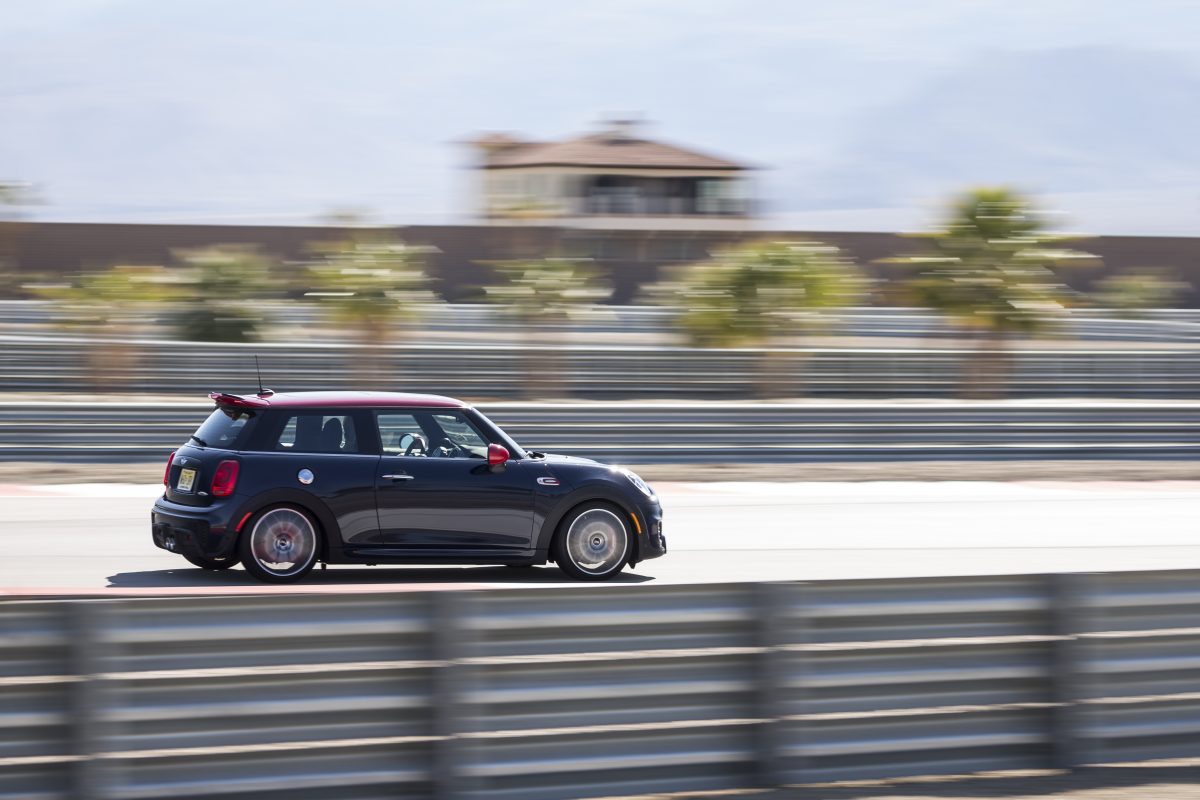 The F56 JCW is an good track car in any form but the JCW Pro Suspension takes it to another level. Coupled with a set of cup tires (this MINI had stock summers) you could have an outright track weapon.

Of the two it’s an easy choice. Both. Ok that’s cheating but the truth is it’s really hard to make a choice between these two cars. The Clubman is obviously the better car for anyone who needs a bit more space where the Hatch wins on outright fun and pace. 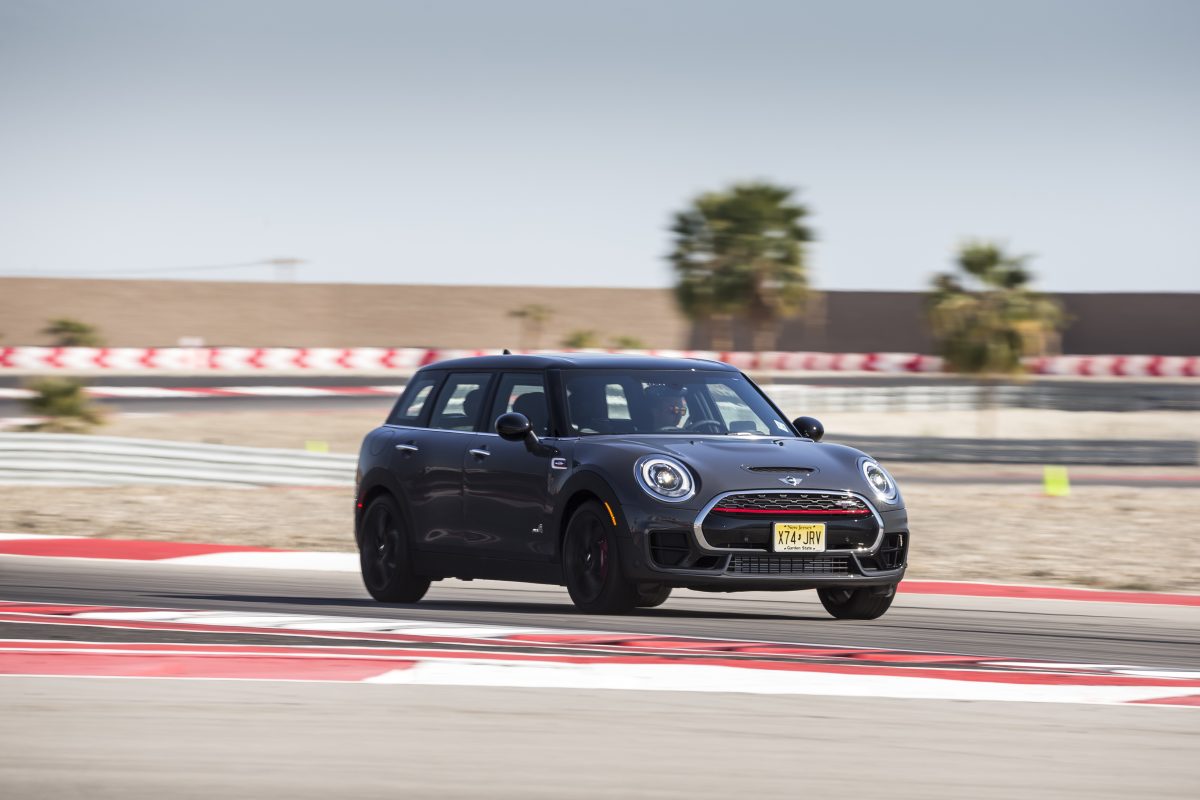 For me personally it would likely be the JCW Clubman if it were my only car. But the JCW Hatch with the JCW Pro Suspension has really opened my eyes. The benefit of a slightly more aggressive suspension set-up can do wonders on a track without altering day to day drive-ability. While MINI doens’t officially offer anything for the Clubman there are several KW sets that OutMotoring sells that could bridge that gap nicely.

What this test does prove is that MINI still makes great track cars. These are both giant killers in that they punch above their weight in lap times while being engaging from the moment of the first turn to your cool down lap. 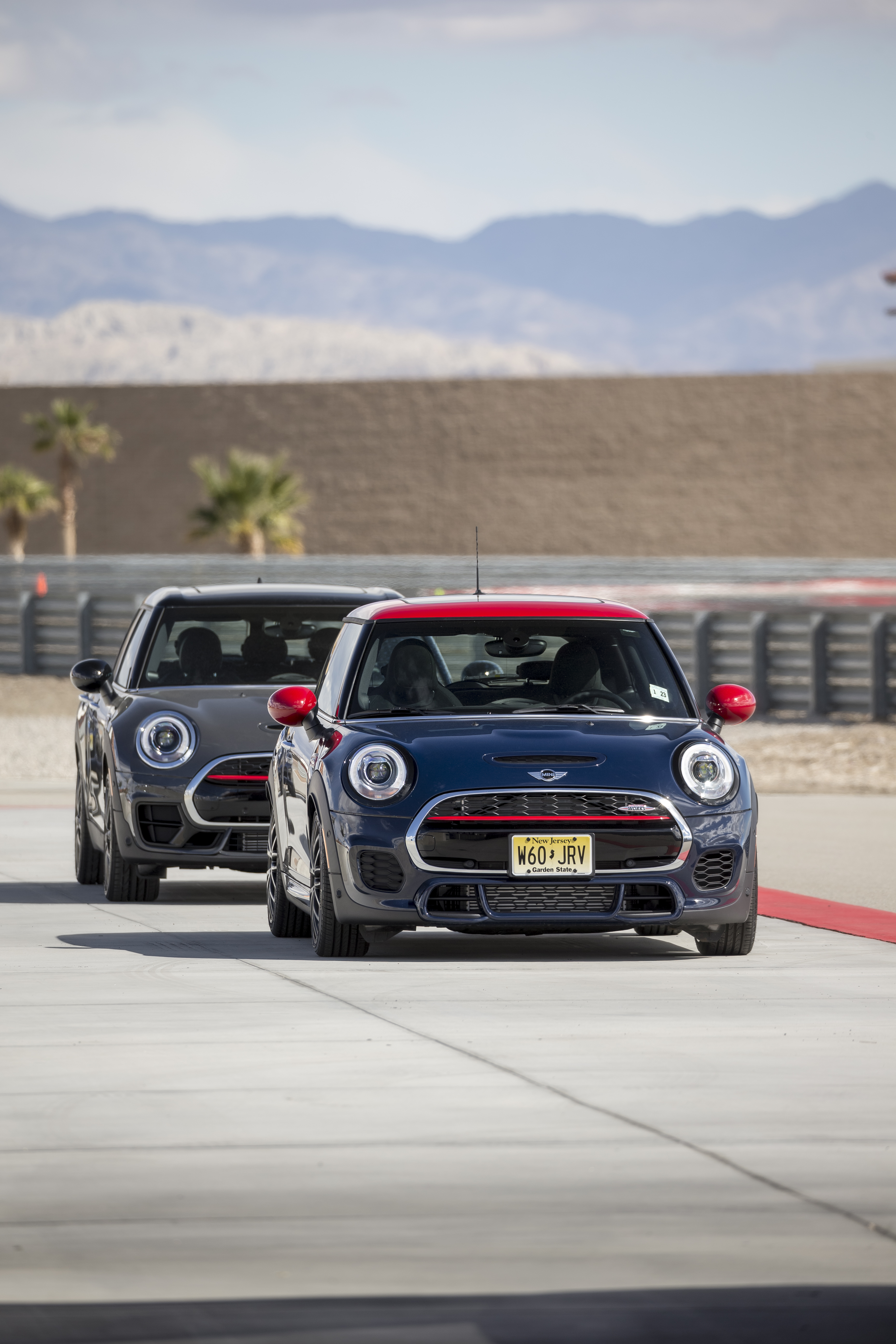