Is there a greater contrast to a MINI than the all new 2019 Rolls Royce Phantom? The Rolls is 3,000 lbs heavier and over 6ft longer in short wheelbase form. Yet both of these cars are designed, engineered and produced by the BMW Group in England. In fact Marcus Syring, former head of exterior design at MINI is now at Rolls Royce and lead the design on the new Phantom. But beyond that (and 12v power outlet socket cover) there’s literally nothing in common with these two cars. So if you want to see just how far (big and expensive) BMW can take a car, read on for our first full review of the Phantom.

The all new 2019 Rolls Royce Phantom is the best car in the world. Don’t try to quantify it. Just believe it. The Phantom delivers perfection while wafting through an imperfect world. The things that impact most cars drive seem to have little if not no affect on the Phantom. It’s impervious to the annoyances that driving can deliver. In their place is the essence of modern luxury, opulence and ultimately comfort.

It wasn’t always like this. There were decades (the 70’s through the 90’s) where the products and the brand’s reputation tarnished by uneven technology and design that didn’t look or feel modern. In many ways the brand was searching for its place in a modern world. More specifically Rolls Royce needed to meld its history of human craftsmanship and technology. Enter BMW.

BMW’s English buying spree netted out with two brands that we care about – MINI and Rolls Royce. Representing two ends of the automatic spectrum, BMW sought to bring modern sensibilities to both in very different ways. For Rolls Royce this was nothing short of a revolution. The first product from this time period was the 7th generation Phantom which immediately collected accolades and set sales records for the brand.

It’s hard to understate how important and ultimately successful that car was for Rolls Royce. Fast forward 17 years and we have a new Phantom that is not just better but on another level in every category. 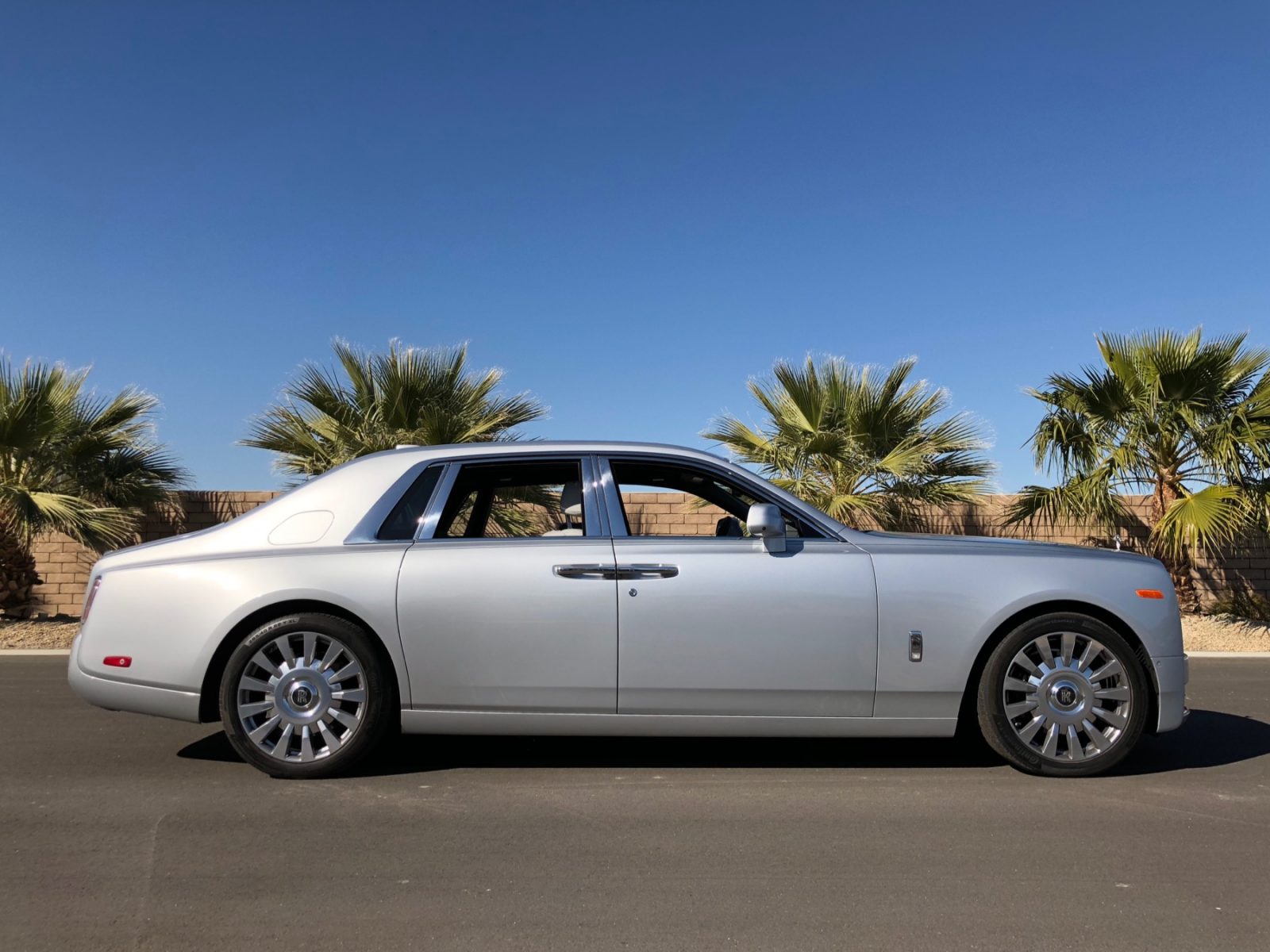 The 2019 Phantom is a hulking masterpiece of design. It’s both understated and impossibly brash in its presence. The size of this thing is hard to wrap your head around. Even in person it seems to bend physics as its exterior design has been carefully curated to make it’s size approachable and its mass to almost shrink from certain angles. But it is massive. The wheelbase is 140” and it’s total length is 227” in standard wheelbase form. While that’s only a couple feet longer than a long wheel base BMW 7 Series, the difference in mass between the two is almost shocking. The weight difference gives it away – at 5,650 the Phantom is almost 1,500 lbs heavier than the current long wheelbase BMW 7 Series. 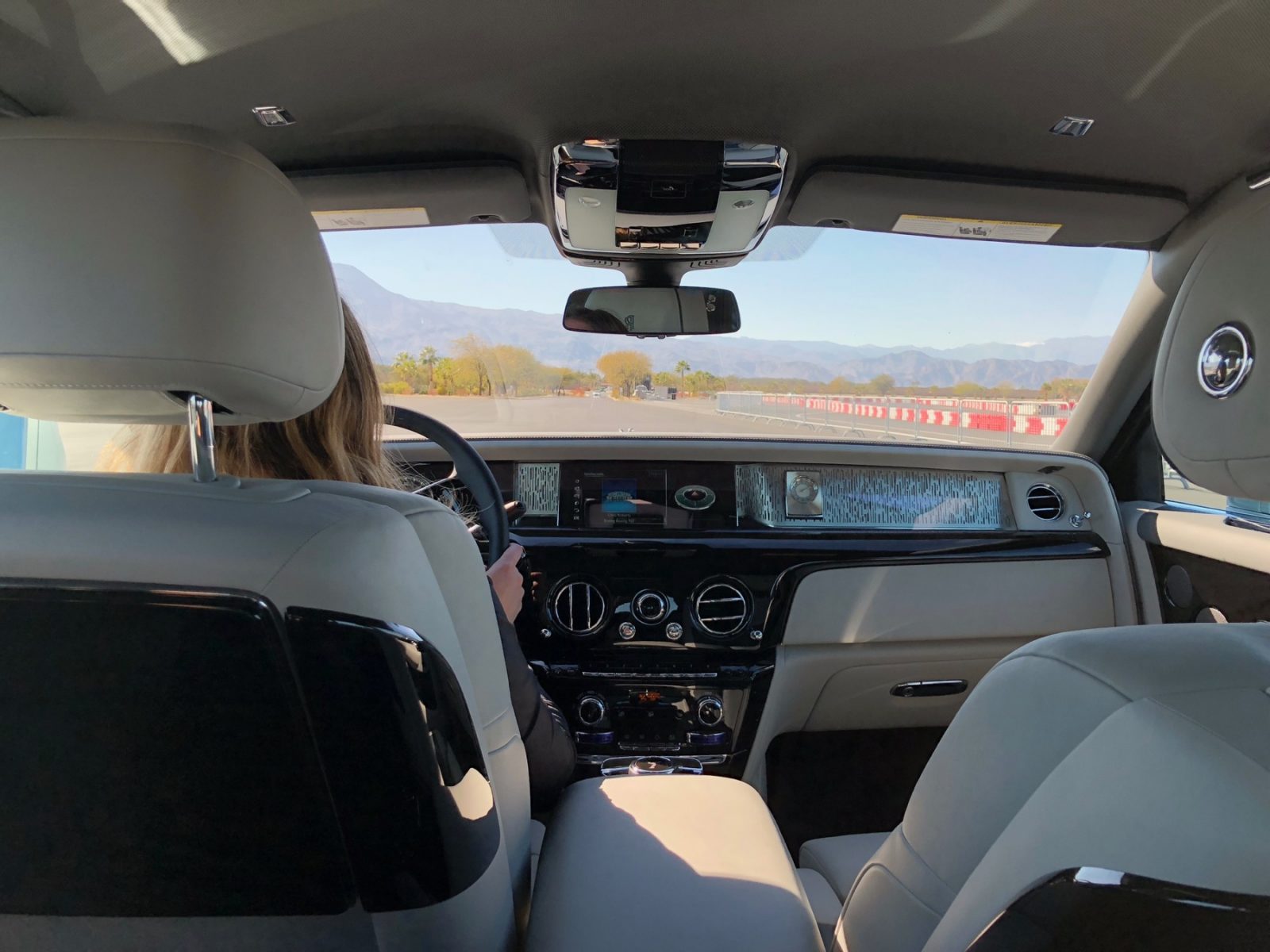 Riding in the 2019 Rolls Royce Phantom

To properly test the Phantom you need to experience the car as half its owners will – which is to not drive it. This begins with a driver opening the (smaller than you expect) rear hinged door. At this moment you realize you’re entering an automotive world of luxury beyond what most of us have experienced. Stepping into thick carpet and sliding onto English sourced cow hide (which feels a step above anything else BMW offers) you settle into a seat that feels more like a chariot than a luxury car.

Unlike most cars the Phantom was designed around this seat. The size, the height and the feeling it gives you as the rider was all carefully crafted for the perfect experience from the moment you enter. Rolls Royce designers have worked hard to create a duality between omnipresent technology and old world craftsmanship and simplicity. Yes there’s iDrive back here along with the two largest rear seats screens I’ve ever seen. But they’re carefully hidden behind hand-polished wood and chrome allowing passengers to engage or disengage on their terms. But there’s more than just large screens back here.

Want to open a close the door while seated comfortably? There’s a discreet button to open and close each rear door from the back seat discreetly hidden in the C-Pilar. Stepping out into the rain? There’s a beautifully crafted full-sized umbrella hidden in the rear door ready for use. 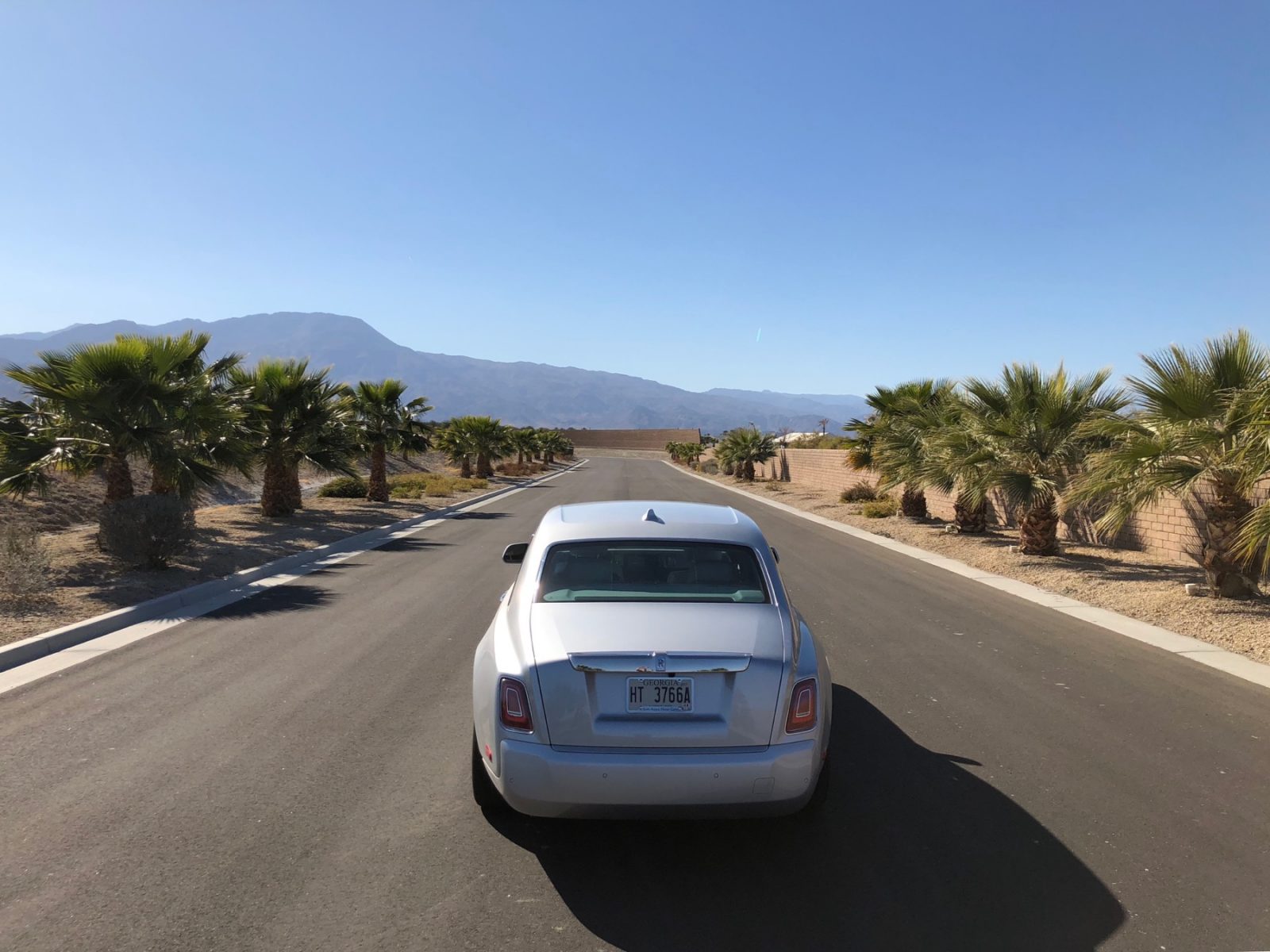 Moving from the backseat to the front, we step onto the thick carpet and into an automotive environment like none other. There are knobs made of heavy chromed steel, thick burled walnut (sourced from old-growth English Walnut trees of course) and leather covering every surface. The steering wheel is large and classically thin. At odds with most of the automotive world we know but completely inline with what you’d expect here.

Entering the driver’s seat you’re immediately struck by the bespoke quality of the materials and the design itself. But it’s the details that are the most interesting. For instance Rolls Royce knows these cars have demanding passengers as much as drivers. Because of this there are two small (and hidden) buttons by the left dash vent that remotely opening and close the rear doors.

Glancing around there’s almost no visible plastic to be seen anywhere (and certainly not in reach). The driving position is upright and focused on what I would call appropriate comfort. There’s an iDrive controller tucked away and a screen where you’d expect (appropriately not that big) but otherwise this feels miles away from even a 7 Series.

The entire dash is covered in glass allowing for any surface or design to be placed behind it. This gives Phantom owners a limitless amount of customization opportunities.

We’re not sure if it all adds up to $418,000 but it’s beyond anything we’ve ever experienced – including the previous Phantom. 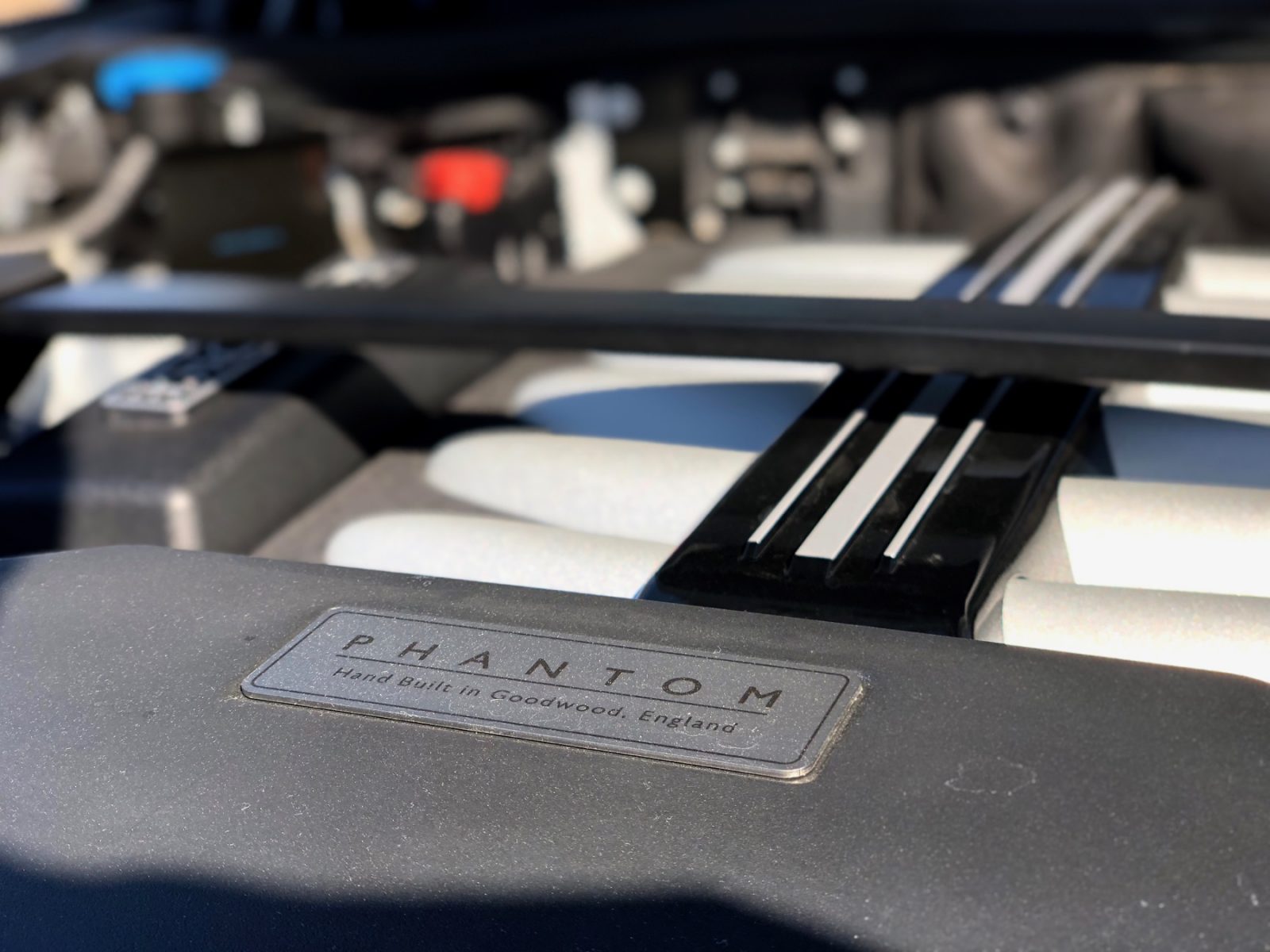 Pushing the start button brings to life a monstrous 563 hp twin turbo V12 that is barely audible inside but gives the feel of endless power underfoot. I’d describe the acceleration as deceptively brisk but this isn’t a car designed to be hurried. 0-60 is about 5 second in short wheelbase trim but you’re doing it wrong if that matters to you as a Rolls Royce owner. This is a car excels at making the world around it disappear both literally and metaphorically.

It’s also a car of enormous weight that Rolls Royce is clearly proud of. Despite aluminum bodywork this is car that weighs 5,644 lbs in short wheelbase form. As engineering director Phillip Koehn stated recently: “Saving weight wasn’t a priority. If there’s a chance to improve stiffness, I take it.” The sound deadening alone weight almost 300 lbs in the Phantom. 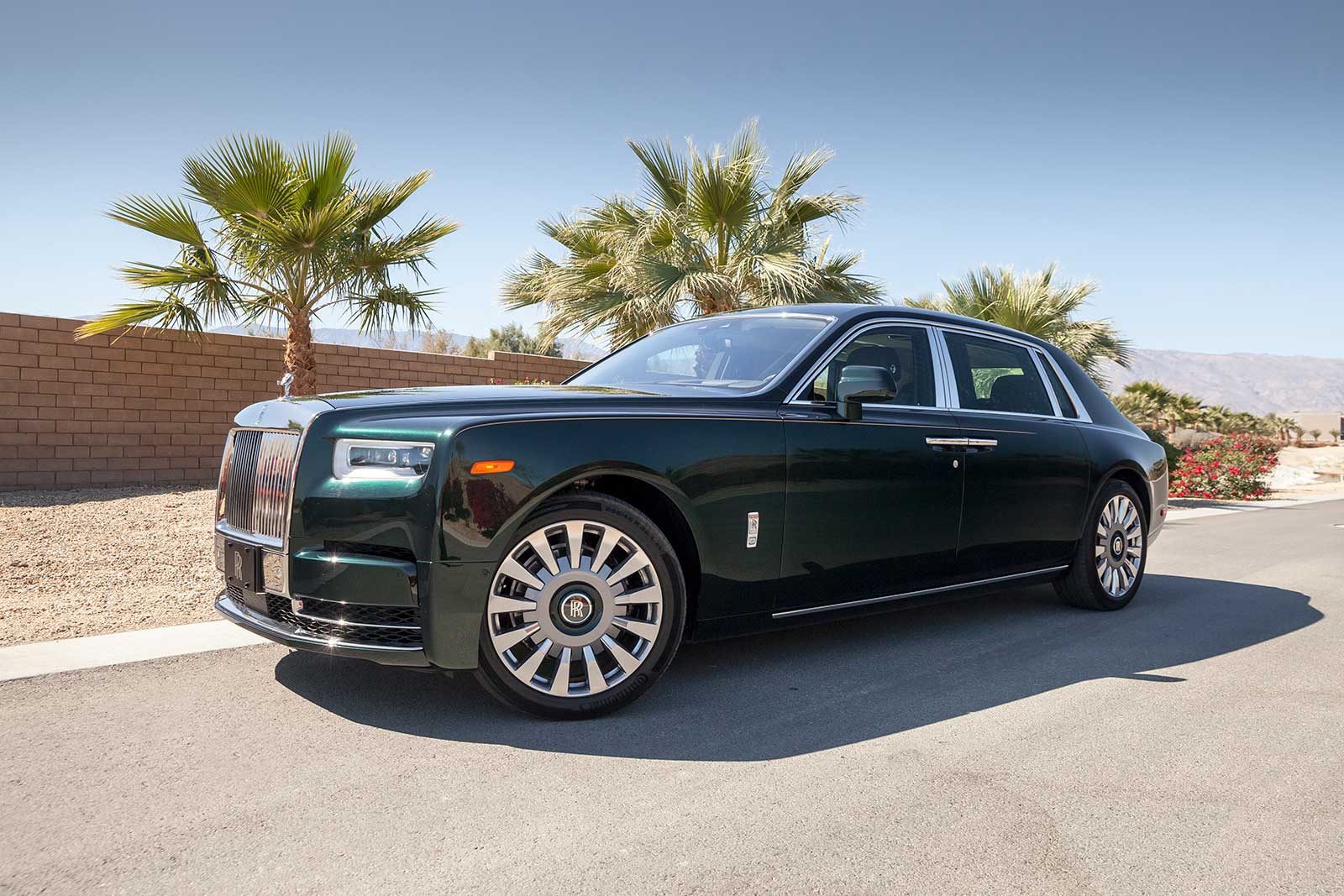 This all adds up to a car that doesn’t corner as much as it navigates around turns. But it’s worth noting that the feedback at the wheel and the chassis tuning give the driver plenty of confidence at both low and high speeds. The term vault-like has never been more appropriate.

Every mechanical function we normally pine over has been tuned for subtlety as much as effectiveness. The eight-speed ZF transmission is almost CVT-esque in its power delivery. The brakes, even when worked hard, barely make the front of the car dive. And sudden acceleration barely registers in the opulent backseat. 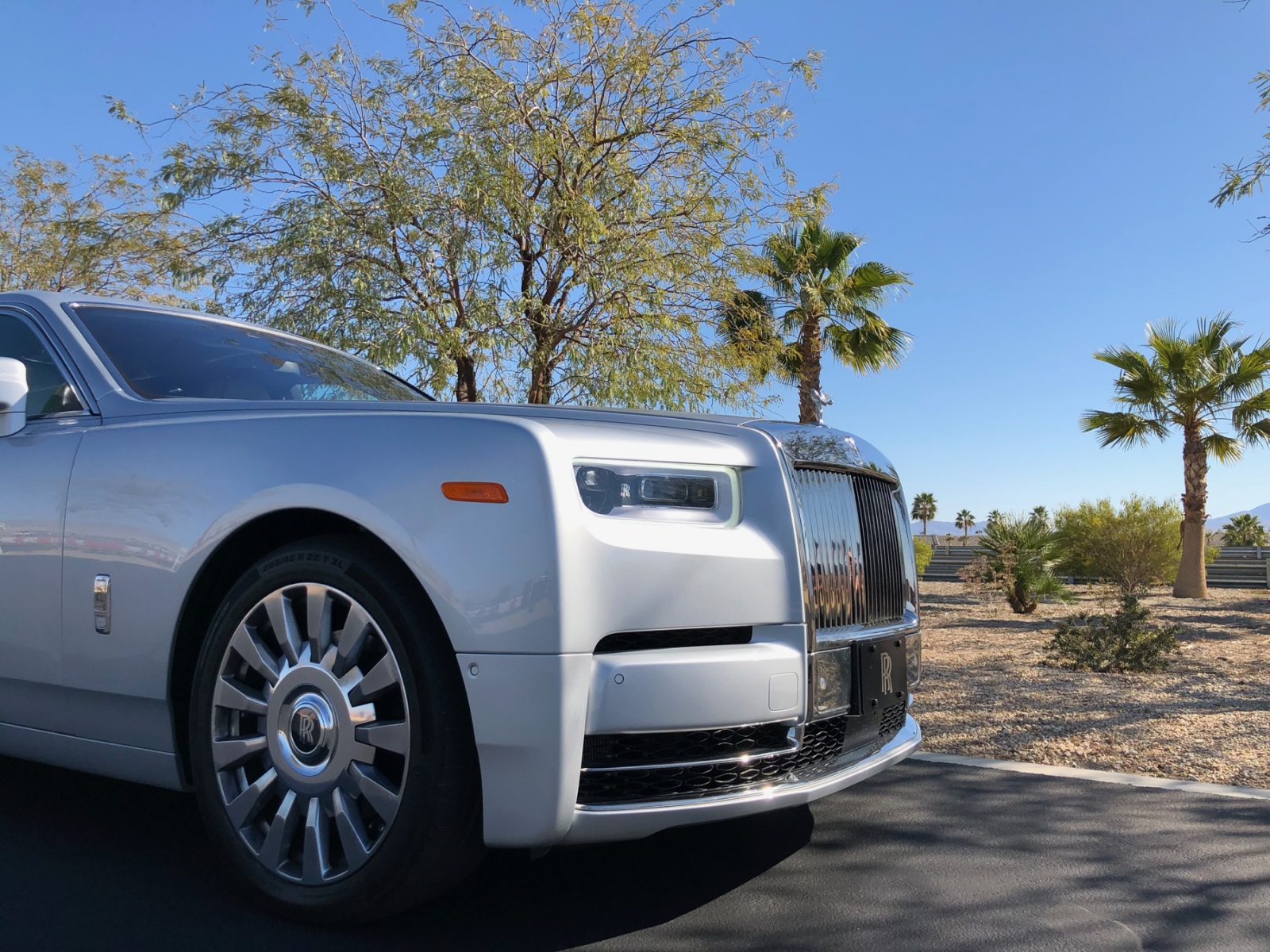 Then there’s the ride. Role Royce engineers have worked to both tune out the world while giving the driver just a enough connection to the road. The result from the front seat is confidence and comfort. From the backseat it’s just pure silence.

The Rolls Royce Phantom stirs emotions without a tachometer and stuns you with both opulence and subtlety. It has once again has redefined luxury with old world engineering and craftsmanship mixed with modern Germanic technology. Is it the best car in the world? It’s an absurd question naturally. But like all Phantoms before it, Rolls Royce proudly calls it just that. An eye rolling claim? We’re not so sure. After some time both behind the wheel and in the back seat we can’t imagine production automobile in the planet that can lay claim as convincingly as this one. 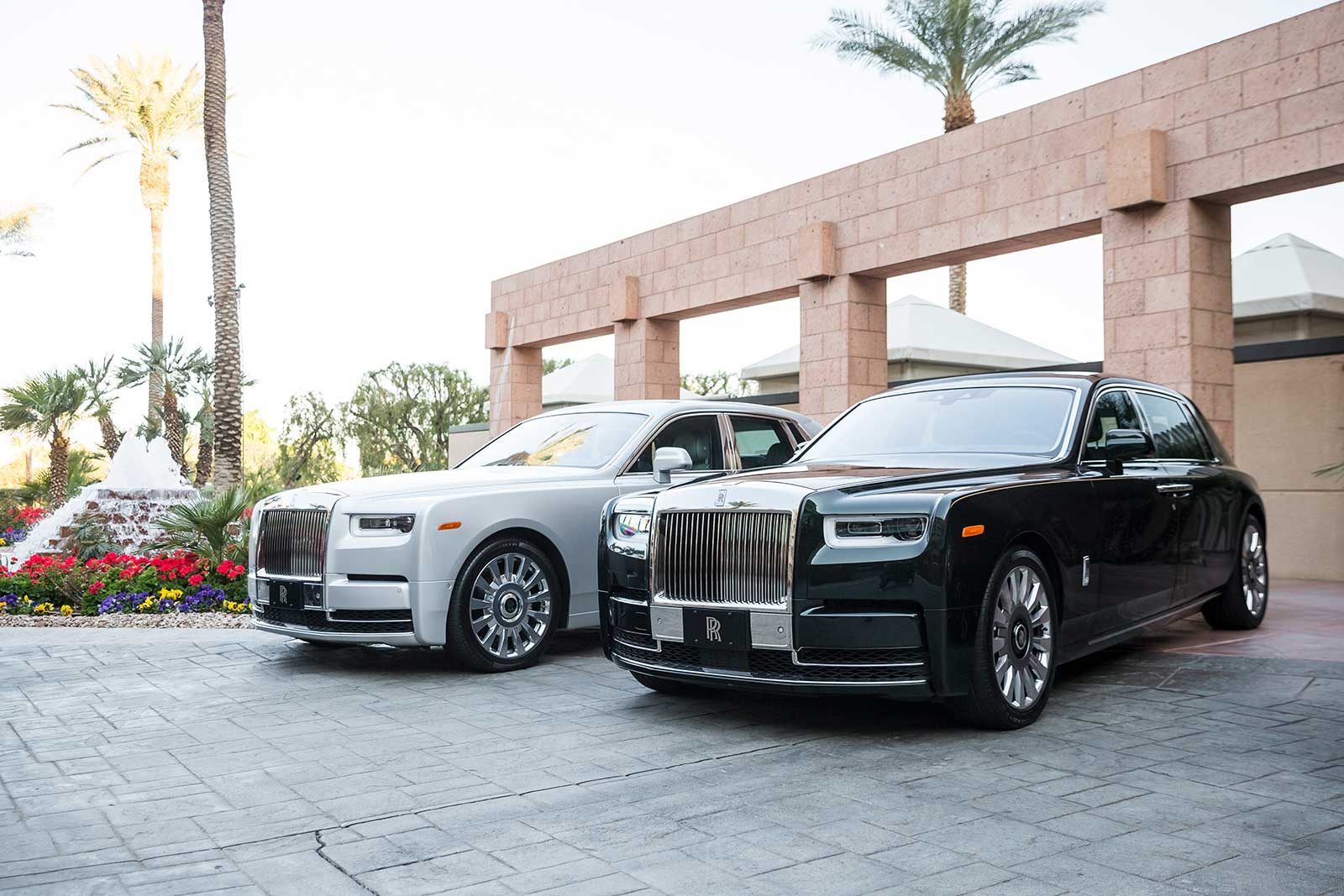