A year has passed since that historic victory, and the race has doubled in length, going from two to four hours, but the result was very nearly the same.

The driver lineup was unchanged from the last event at Mid-Ohio. Derek Jones and Nate Norenberg were behind the wheel of the 37, Mike LaMarra and Mat Pombo were in the 73, and Colin Mullan, making his second start for the team, joined Mark Pombo in the 52.

Mullan is proving to be a solid addition to the team. He had an excellent qualifying run, putting the car on the front row, just under two seconds behind the pole sitter. The pairing with veteran Mark Pombo has worked tremendously well, as shown with the second place finish at Mid-Ohio.

Mark had a successful run at Watkins Glen last season as well, finishing in second with co-driver Jay Salinsky. 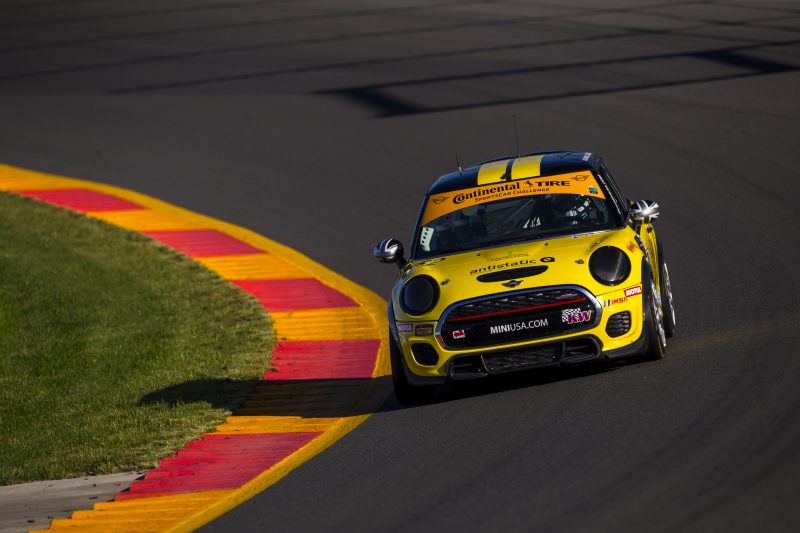 Mullan ran an excellent opening stint, squeezing every ounce of performance out of his 52 MINI in an attempt to stay as close as possible to the leader. Mullan held on to second place for the entirety of his run while also building a large gap to third before handing off the car to Mark Pombo. When the final round of pitstops began the crew was ready to win it. For the fourth straight race the team put in another excellent performance, servicing the car and completing the stop flawlessly, putting the 52 machine in the lead.

Mark took advantage of Mullan’s stint, as well as the teams execution and race strategy. He put together another impeccable Pombo style winning drive to the checkered flag, bringing the MINI JCW Team it’s second consecutive victory at Watkins Glen, and third in a row this season.

Mark was incredible at getting me up to speed since it was my first time at Watkins Glen. The MINI JCW Team was fantastic at getting the setup right and nailing our pit stops, which played a huge role in getting us the win! – Colin Mullan

The 73 of LaMarra and Mat nearly provided the 1-2 finish to match last season’s event. After running well throughout the event they found themselves in 2nd, with two laps to go. But it wasn’t meant to be as the car suffered an axle failure related to a torn CV boot. This is the same issue experienced at Daytona, and is simply a result of the drivers pushing the MINI JCW beyond its limits in an effort to stay close to the competition.

It’s no secret that the MINIs haven’t had the same top speed as their competitors. This was evident during qualifying. The series regulated Balance of Performance (BoP) has favored the other manufacturers. BoP is how the series attempts to level the playing field, giving and taking from the different cars in an effort to keep the competition fair. 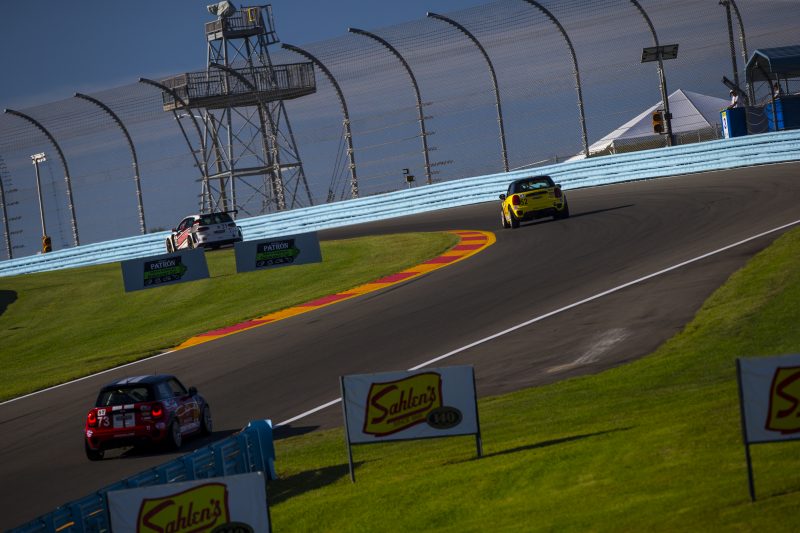 Despite this disadvantage, the MINI JCW Team has proven time and again this season that they can overcome. The execution of the crew and MINI dealers’ technicians as well as the management of the race is one place where the team excels above all others. When you pair this with the quality of drivers the team has, it’s not surprising to see how well they have overcome the challenges.

The win at Watkins Glen adds to MINI’s lead in the manufacturer’s standings over second place BMW. Mark Pombo having two different co-drivers this season stands alone atop the driver’s standings.

It’s a quick turnaround as the team heads to Canadian Tire Motorsport Park (CTMP) this weekend. The two and a half mile course is comprised of 10 turns and features several elevation changes. It’s a favorite among drivers and has hosted some exciting CTSC races in the past. The team has had some success at CTMP as well, finishing on the podium in last season’s event.

The two-hour Canadian Tire Motorsport Park 120 takes place at 3:05 PM EST on Saturday, July 7th. You can watch the race live on IMSA.tv, the IMSA Roku app, or on the IMSA mobile app. Qualifying will be on IMSA radio and you can keep track of timing and scoring for all events at scoring.imsa.com.

The MINI JCW Team Heads to the City of Roses