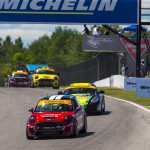 The MINI JCW Team went north of the border for round five of the Continental Tire SportsCar Challenge. They were looking to make it four wins in a row with a victory in the Canadian Tire Motorsport Park 120.

The two and a half mile course is comprised of 10 turns and features several elevation changes. The team has shown good speed at the track before, resulting in a podium finish last season.

The Balance of Performance (BoP) hasn’t been in favor of the team this season. And that was quickly evident after only fifteen minutes of action. The top running MINI, the 52 with Colin Mullan behind the wheel, trailed the leading 81 BMW by 26 seconds.

The 73 of Mike LaMarra and Mat Pombo was the first MINI to experience an axle failure. LaMarra ran a good opening stint, holding down a podium position for the majority of his run. After a solid pit stop by the always amazing crew, Mat Pombo took the car back out in third position.

Mat has had solid closing stints this season, bringing home the victory for him and LaMarra at Mid-Ohio. But only minutes into his run the car came to a stop in turn 5.

The 52 looked to have the best chance at bringing home victory for the team after the solid start by Mullan.

I was able to work my way back up to second and had great four way battle with my teammates and the Bodymotion Porsche. I built up a large gap before handing the car over to Mark Pombo. – Colin Mullan

The full course yellow brought out by the 73 did have one fortunate side effect, it bunched up the field. This put Mark in perfect position to fight for the lead. And fight he did. The 52 and 81 had a fierce battle, occasionally making contact as they battled for the lead. They traded the position a number of times, with Mark finally getting the better of the 81. Mark was pulling away when the 52 suffered the teams second axle failure, just minutes before the end of the race. This left the 37 as the teams last chance of coming away with a victory.

The 37 had it’s best run of the season. Derek Jones and Nate Norenberg drove an excellent race. They’ve shown good speed throughout the season, with Norenberg getting the pole at Sebring. The duo have dealt with their fare share of bad luck in the previous races but were able to put it together this week at Canadian Tire Motorsport Park, earning a well deserved second place finish.

Bittersweet result yesterday overall but @djoneser and I still put a MINI on the podium in 2nd! Big thanks to the crew at LAP and MINI for putting the car back together for Mosport this weekend in only 2 days! – Nate Norenberg

MINI still holds a three point advantage in the manufacturer’s standings, and will look to build on that in the next event.