The jaw-dropping MINI JCW buggy debuted at last year’s Dakar to much fanfare. It was a clean sheet design that took all the know-how from MINI’s previous Dakar appearances in creating a dedicated off-road racer. While its first year ultimately wasn’t successful, the buggy (and the Countryman) is back this year with notable updates and a lot of optimism. Lets take an in-depth look MINI’s most capable rally car of all time. 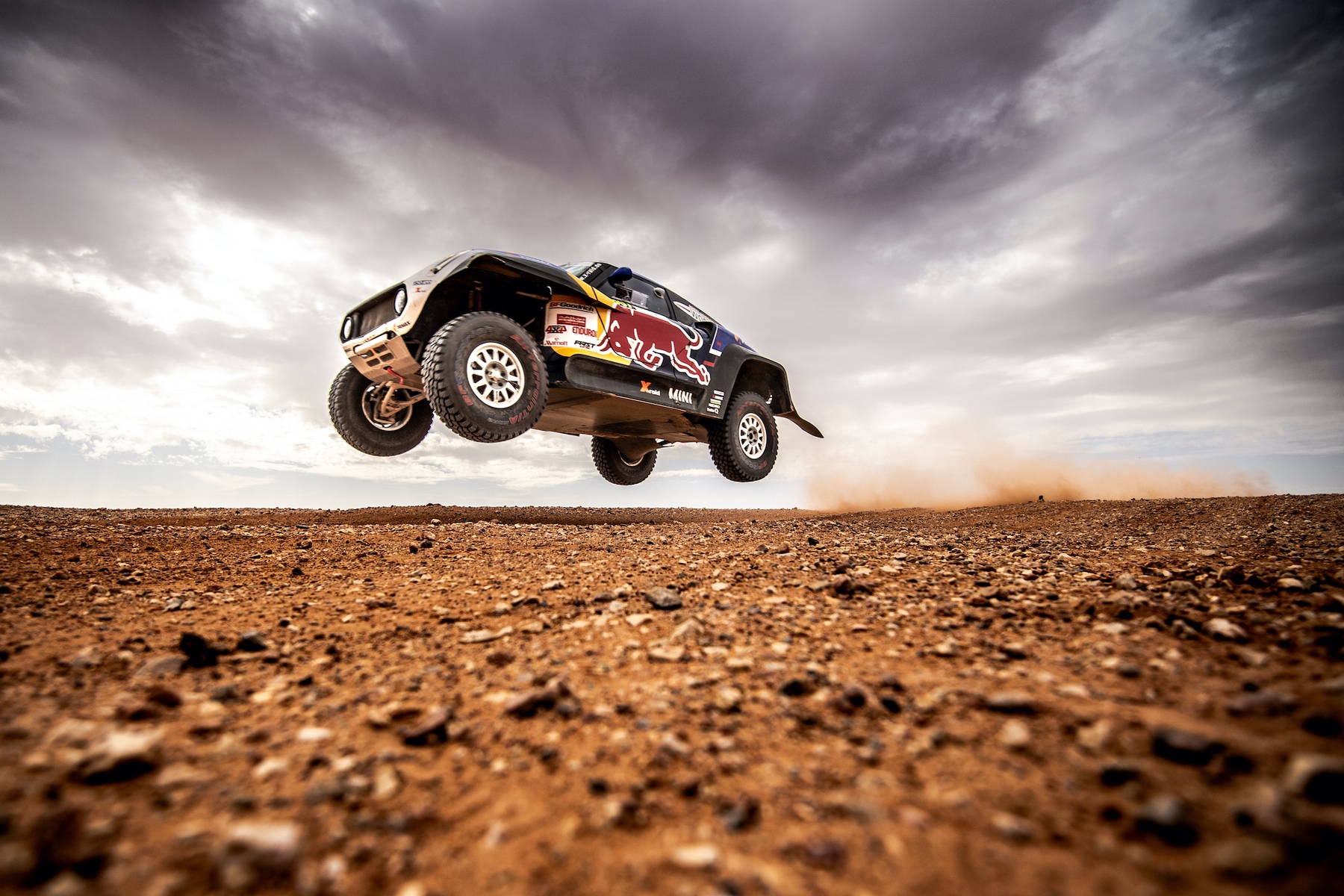 Dakar 2018 represented a major change for MINI Motorsport and its motorsport partner X-raid, when a new X-raid conceived and built Dakar competitor was revealed in the form of MINI John Cooper Works Buggy. Apart from the obvious differences in chassis design, the biggest shift was the jump to two-wheel drive from 4×4 – a design that helped MINI Motorsport and X-raid capture four Dakar titles, many rally raid victories and five FIA Cross Country Rally World Cup championships to date.
Dakar 2018 showed how reliable the new MINI JCW Buggy was. Not one major technical issue came to light during 14 days of competition over some of the most difficult terrain known to man and machine. But X-raid and MINI Motorsport keep on working; very quickly the MINI JCW Buggy was returned to the test track as part of its development programme.

Today’s MINI JCW Buggy retains the BMW Group supplied six-cylinder diesel engine used for the 2018 Dakar, but the turbocharger system is all-new. The previous MINI JCW Buggy ran with the TwinPower Turbo (two turbochargers), but the 2019 Dakar version has the latest specification BMW diesel turbo system, which consists of a single turbocharger with variable blade technology. 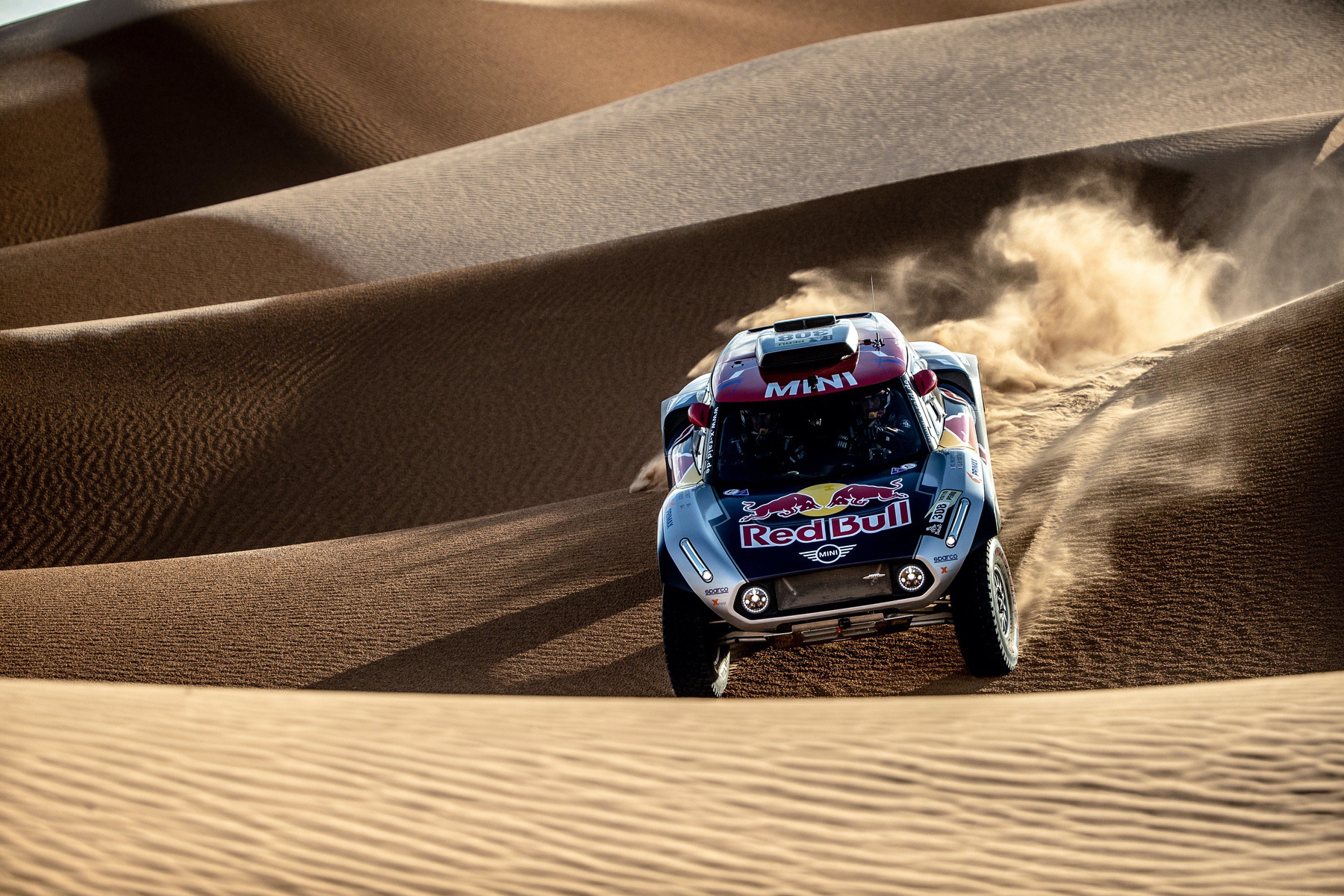 To accommodate the new turbo system, the diesel injection system required revised timing and the exhaust manufacturer, Akrapovi?, had to reconfigure the competition exhaust. The intercoolers are of a new layout and now air-cooled instead of liquid-cooled. The air intake system and turbo actuators (electric) are also revised.

Another significant update belongs to the air intake restrictor. For 2019 Dakar the restrictor size has been allowed to be increased by 1mm, from 38mm to 39mm. Coupled with the new turbo system, power output has increased slightly to give a little more top speed. 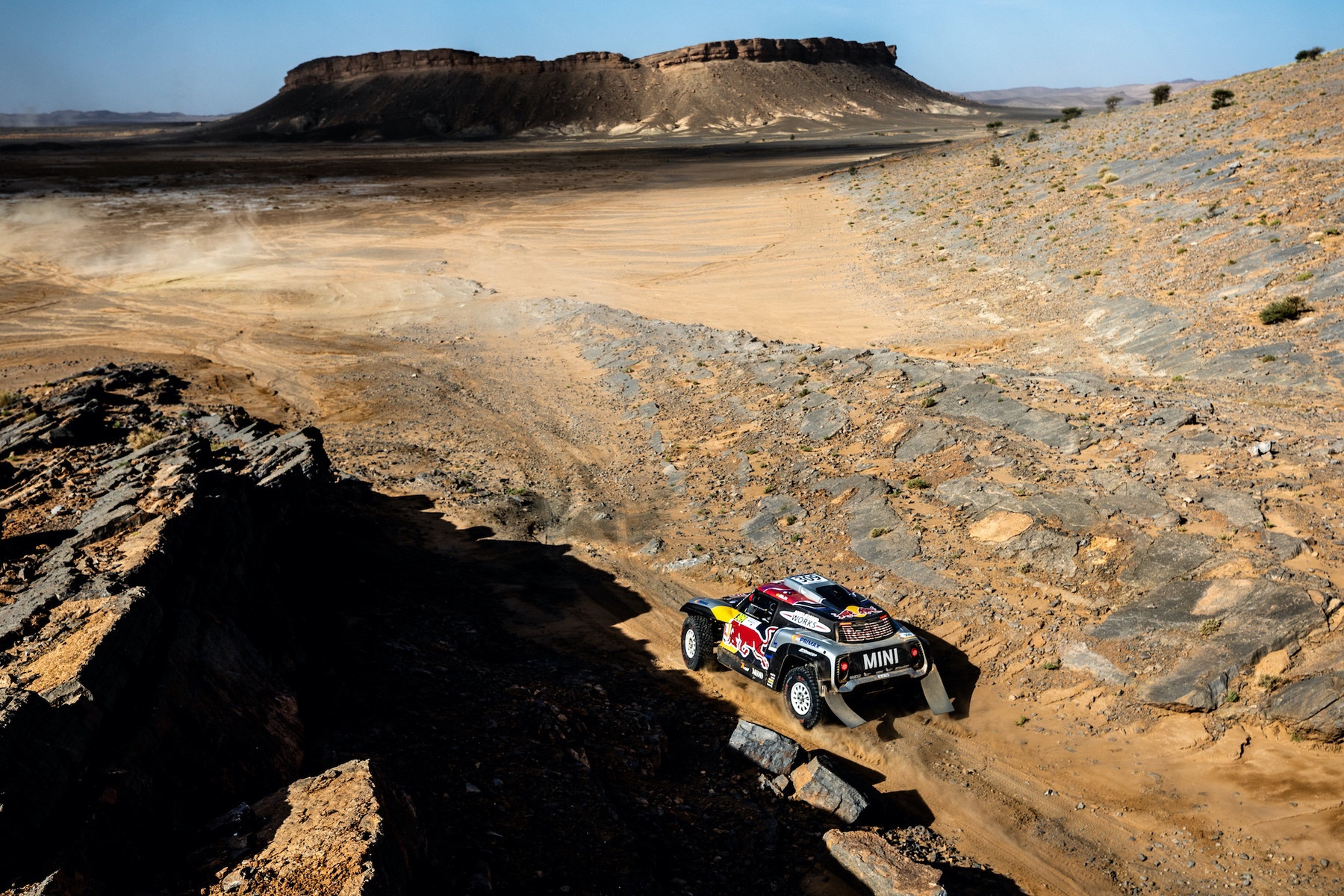 However, the most notable change belongs to the chassis set-up, especially suspension and steering. These changes came about with the input provided by the three new drivers (Cyril Despres, Stéphane Peterhansel and Carlos Sainz) who make up X-raid MINI JCW Team that will contest Dakar 2019. All three drivers put MINI JCW Buggy through its paces during testing as part of its ongoing development programme.

“One of the things we learned from Dakar 2018,” says Sven Quandt of X-raid, “was the car was not the fastest because of the chassis set-up. Carlos Sainz first drove the Buggy in May this year for two days and within those two days he had completed a suspension set-up to finish one full second quicker over the same course. We now know that if MINI JCW Buggy had competed at Dakar with proper suspension settings and with such an experienced driver as Carlos, the result may well have been very different. Working with Carlos is such a beautiful thing. Over the past eight months he has made many small changes – not expensive changes – to deliver a race-ready vehicle. He would try this suspension spring and then that suspension spring and keep trying. All the while he would give perfect feedback. Now we are in a position where we have a Dakar-ready chassis to go with the reliability. We are really looking forward to Dakar 2019.” 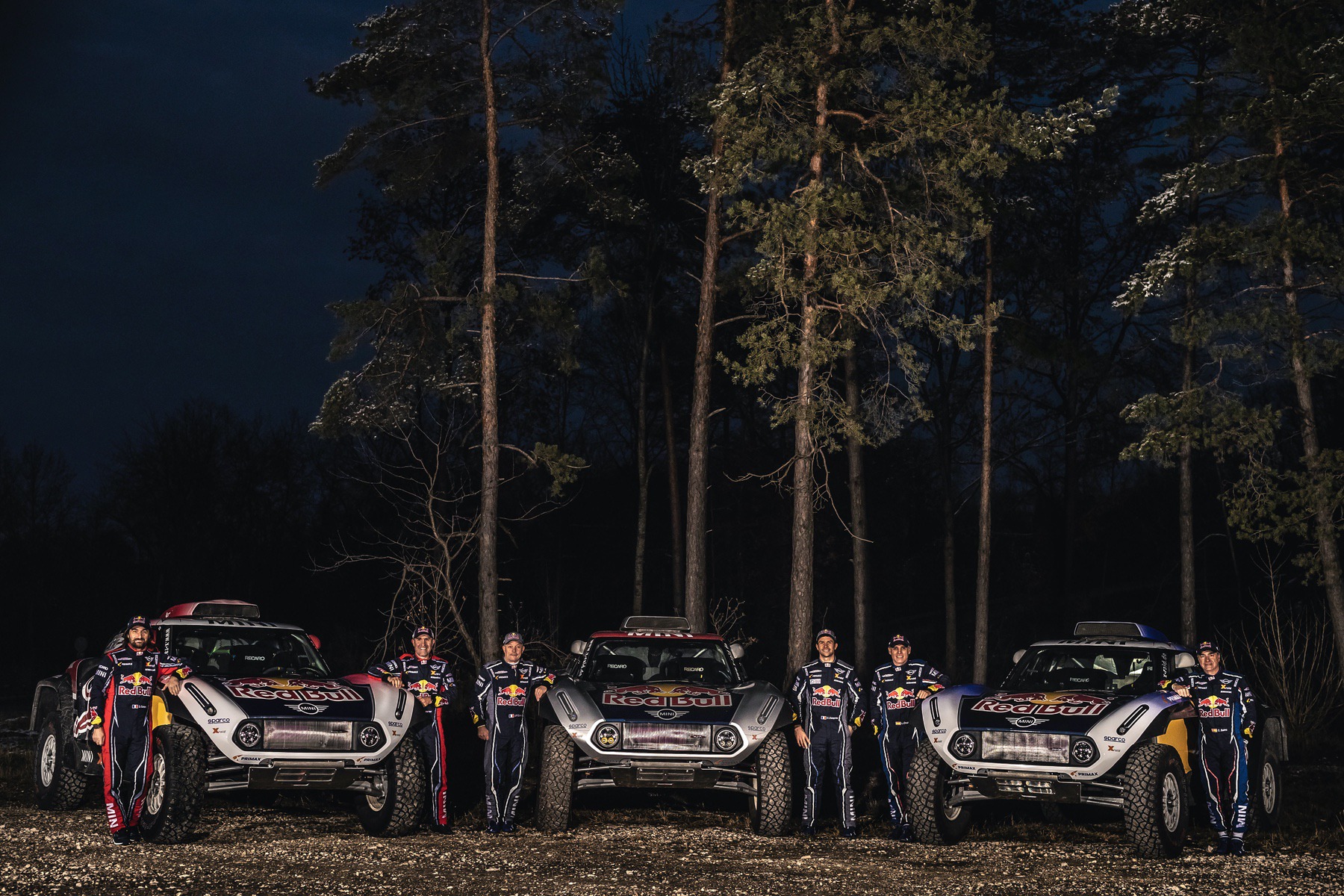 Interview with X-raid CEO, Sven Quandt on the JCW Buggy

X-raid is a German company that specialises in cross-country rally motorsport but predominantly design, building and support of championship-winning cars. X-raid is also the motorsport partner to MINI Motorsport. This longstanding relationship has already produced four Dakar Rally titles (2012-2015) and five FIA Cross Country World Cup championships. X-raid CEO, Sven Quandt, is a former world-class rally driver and experienced Dakar competitor – and the man behind one of the leading and most successful long distance, endurance rally-raid teams of our time.

This will be the second Dakar for the MINI JCW Buggy. What, if any, lessons did Dakar 2018 teach X-raid?

We had a super reliable car with only one minor technical problem, which was easy to resolve at the time. We were not fast enough but we have made changes that we needed to do and I think we have an excellent car. What surprised me last year was the car ran like a clock every day unless the driver made a mistake.

For 2019, you have a dream team of Peterhansel. Sainz and Despres at the controls. What has been their reaction to the MINI JCW Buggy so far?

Incredible! The guys are very, very happy with their cars. They all stressed after some test kilometres on very difficult tracks they said another car would have probably stopped after about a third of the kilometres we did. Reliability is the key and we push past possibility all the time. I am not saying our chassis won’t break but we will go further than other chassis. This gives us more weight than most but it will give us more of a safety margin if a big mistake is made.

With approx 70% of Dakar 2019 consisting of desert, will the Buggy have any advantage over the 4×4 cars?

As long as it doesn’t get stuck in sand, super, great. What they may lose on the rally stages against someone like Nasser Al-Attiyah in a 4×4, then, yes, I’m sure they will win on the off- road stages.

Are there any major differences between the three cars to accommodate the different driving styles of the three drivers?

No! Everybody has a little bit different set up but the rest is identical. There are differences in the suspension set-up but they are really minor according to each driver’s choice.

After designing, building, racing and revising the Buggy all in less than two years, and being contested by rally “legends”, is the win achievable?

That’s what we hope. Otherwise, we would not contest with three buggies. I think the guys are more convinced of a victory than me, but this a good way to be. They all say the MINI JCW Buggy is easier to drive than their last vehicle. Ours is a lot different than they thought it would be; our Buggy is heavier but they can drive harder and further because it is less involving when competing for the same result.

What are the most important developments since Dakar 2018?

Development has been ongoing in all areas. Carlos Sainz first got to grips with the car early in 2018 and this helped make changes from the start for the better. They will have been small changes involving some component parts and basic set-up, but, for sure, these help make the Buggy even more competitive. Testing has been ongoing since then. Reliability, as said, was never an issue.

F1 utilises many new technologies in order to win. Is this the same for cross-country or a case of the better the devil you know.
We feature new technology in all our cars. One example I can tell you about is the frontal area of the Buggy is an aerodynamic package as you would find on a track racing car. The benefit is greater than we thought possible.

You are the “boss” and all Dakar vehicles must be road legal… be honest, have you driven a MINI JCW Buggy home?

No! I have driven them off-road if there are no drivers around and one of them needs moving, but I haven’t driven one home. Not to say it can’t be done. All our vehicles are road legal because there is a special permit in Germany that allows this to happen, but not to go shopping. For testing it is fine.