MINI is almost taking the wraps of the 2020 MINI JCW GP this weekend. Scheduled to appear today during the open ceremony of the 24 Hours of the Nurburgring, the 300 hp GP will be joined by its two fore-bearers – the R53 GP an the R56 GP. The caveat is that MINI is keeping the camouflage but there’s not much hidden at this point. In addition MINI has released a staggering 60+ photos of the new GP detailing every inch of the car from the outside (and even a few underbody shots). And there’s a new figure that’s also of interest: it’s Nurburgring time. The previous GP did a lap in 8:23. This new car is already under 8 minutes and there’s still tuning to be done. 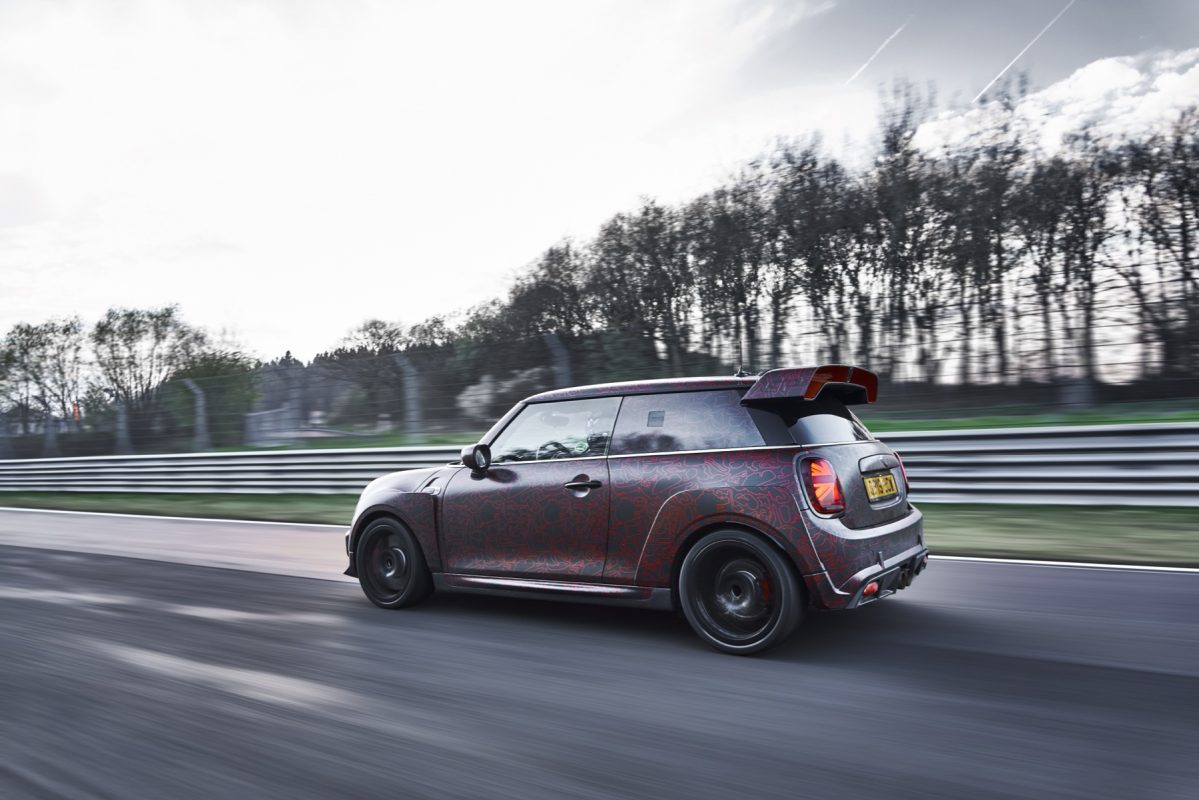 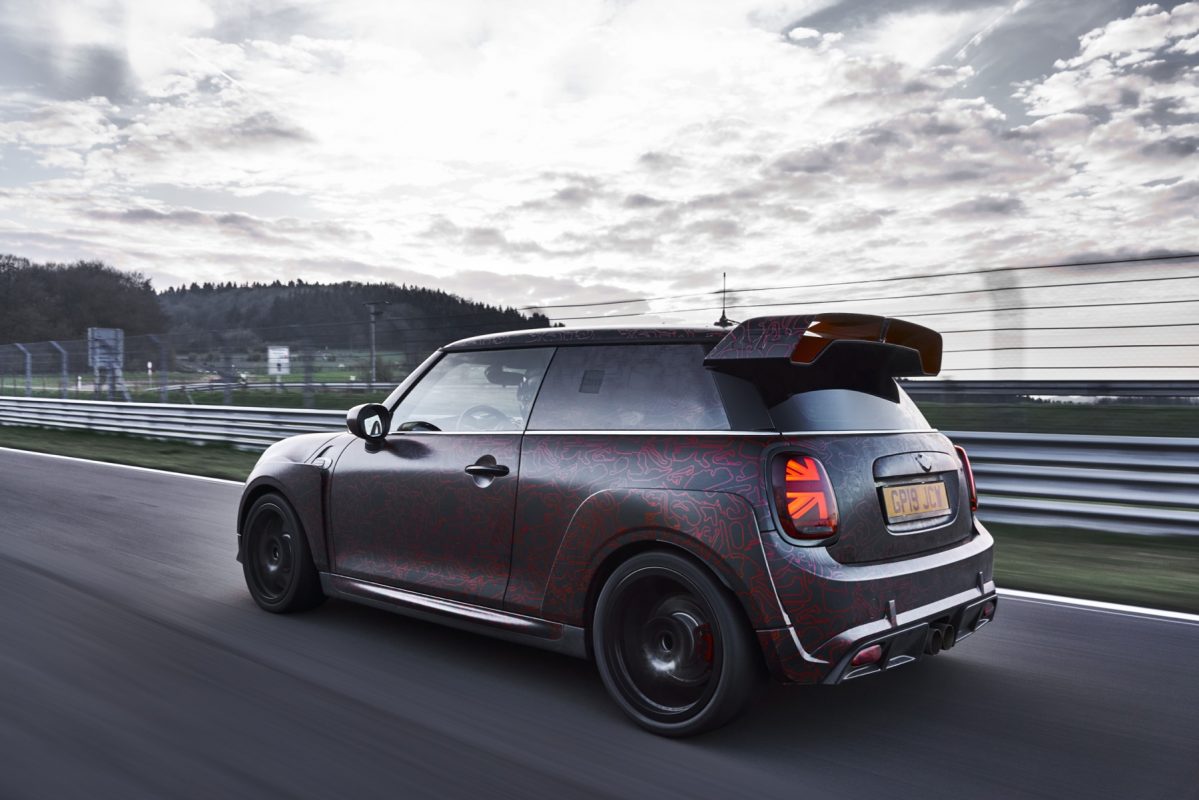 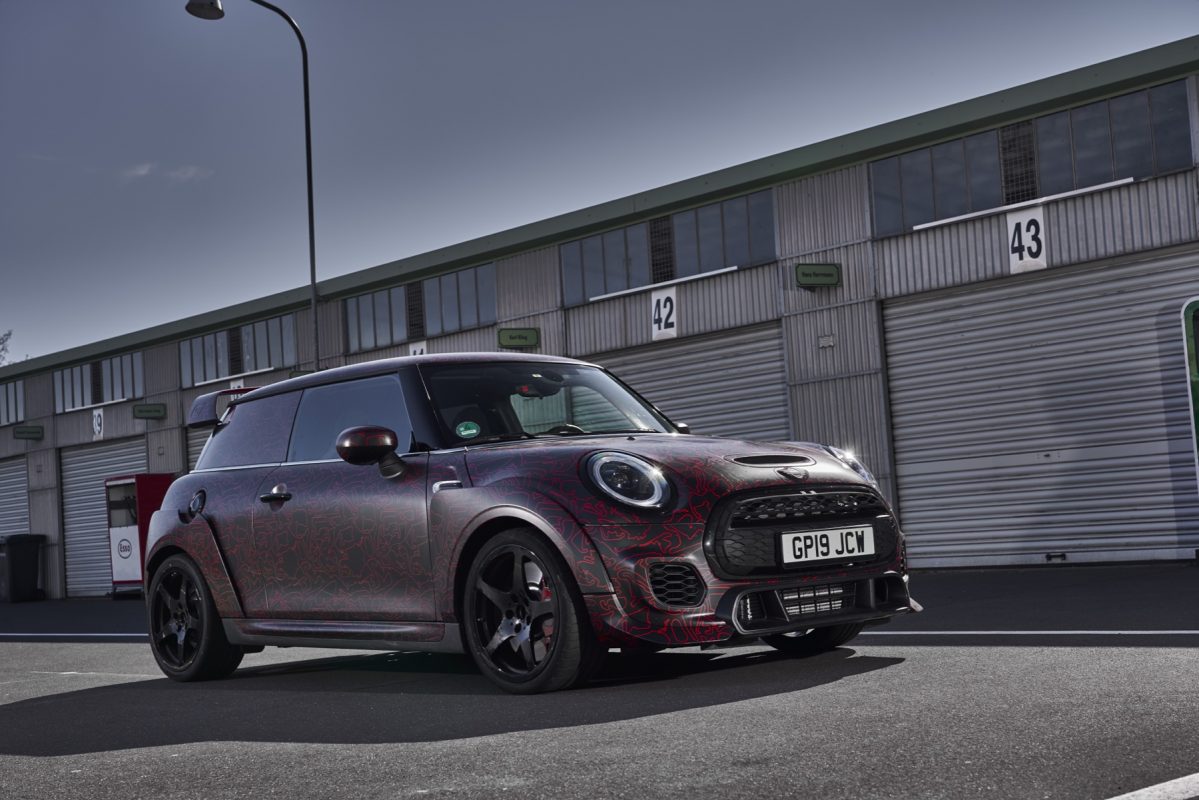 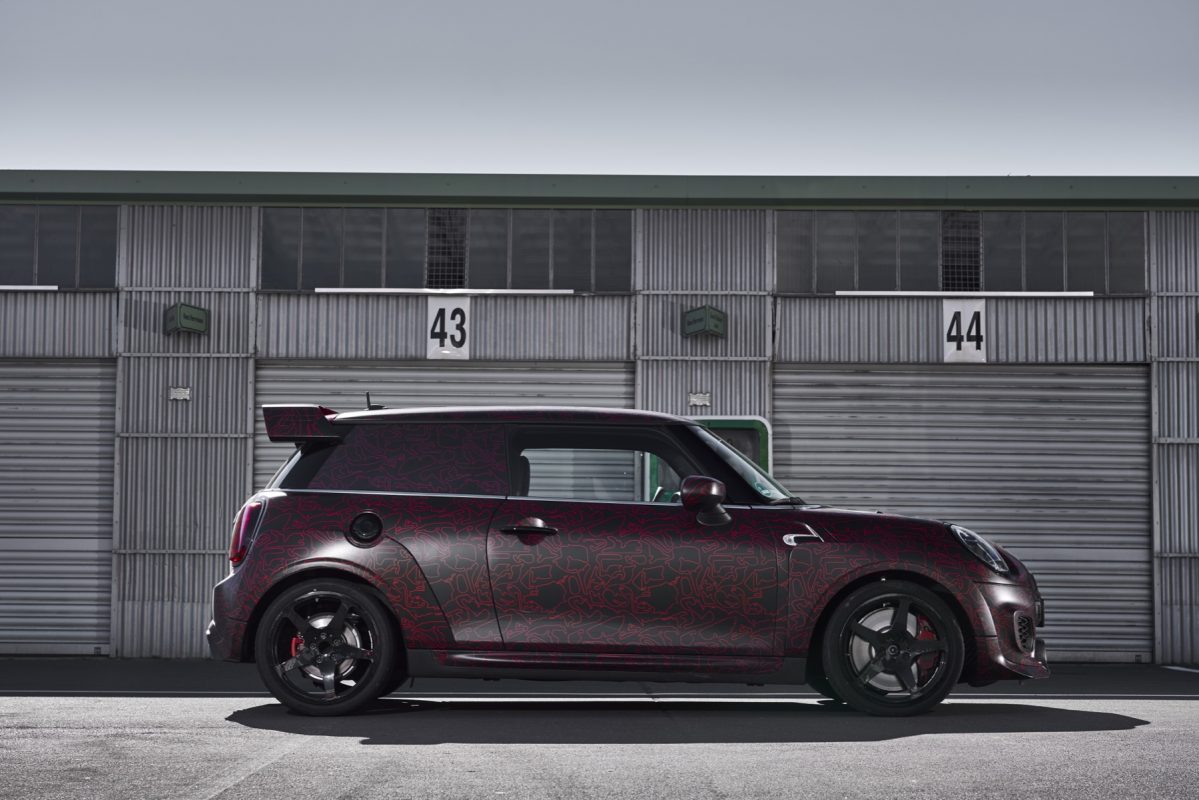 Read for the release and see the entire gallery below. 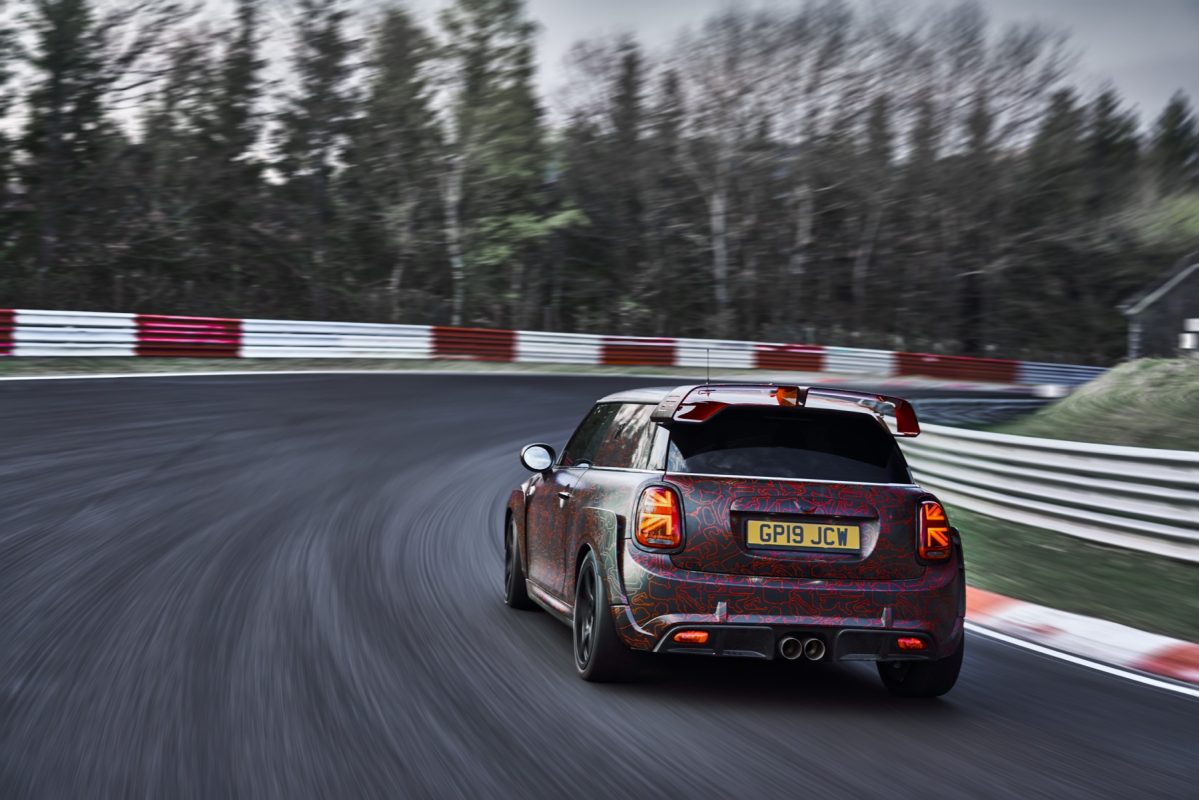 Official Release: The 2020 MINI JCW GP at the Nordschleif

Motor racing fans from all over the world will be eagerly following the 24-hour race at Nürburgring this weekend. In the course of the pre-race programme of the tradition-steeped endurance event, which starts on the afternoon of 22 June 2019, they will have the opportunity to see a car that has already demonstrated absolute top-class performance in battling against both the clock and the challenges presented by this demanding race track. The new MINI John Cooper Works GP is currently completing set-up runs on the legendary Nürburgring-Nordschleife as part of its series development process. Although there is still plenty of time for fine-tuning until the market launch in 2020, the new extreme sports car in the model range of the British premium brand is already boasting lap times that are almost half a minute below the record set by its predecessor. At the 24-hour race, the MINI and John Cooper Works engineers will interrupt their testing programme for a short while to present the disguised prototype of the new MINI John Cooper Works GP to the public for the first time. 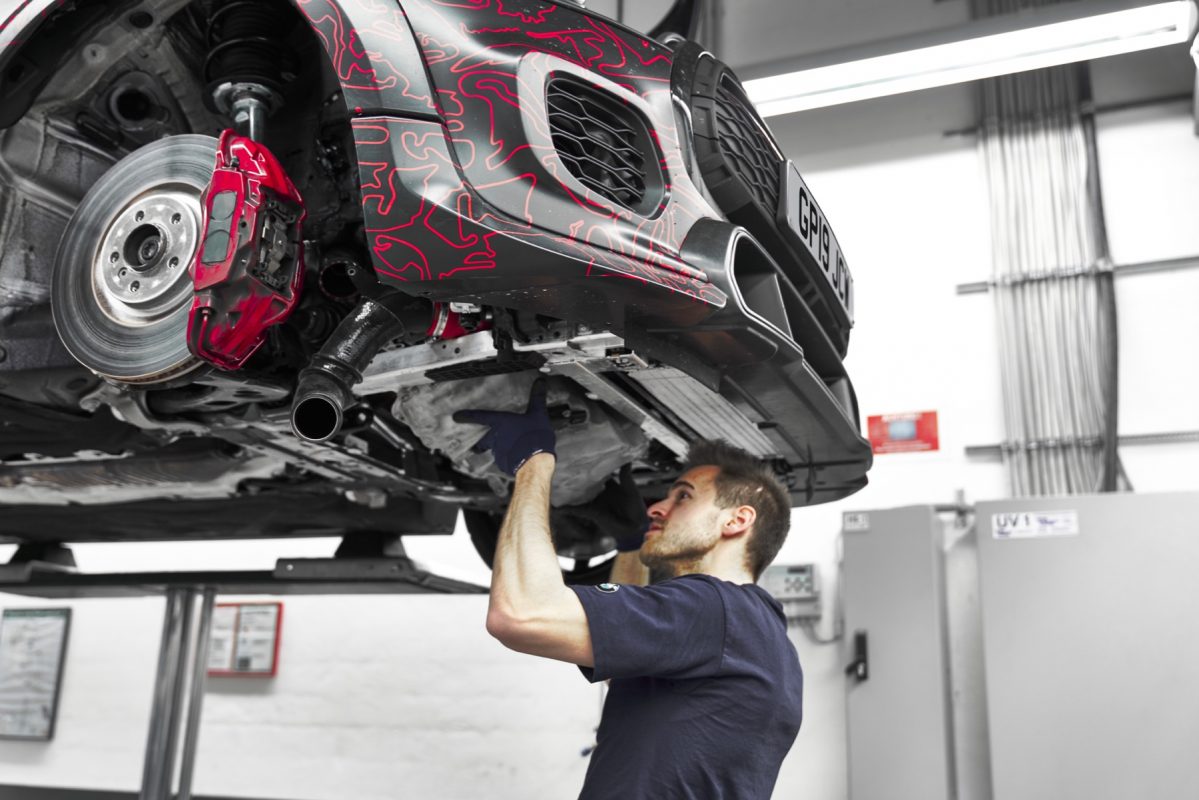 The new MINI John Cooper Works GP will be produced next year in a limited edition of 3,000 units. With its high engine power, model-specific suspension technology harmonised with John Cooper Works motor racing expertise, weight-optimised construction and precisely defined aerodynamic properties, it sets a new benchmark in the small car segment. The fact that it takes the extreme driving fun offered by a MINI to a whole new level has already become amply clear in the course of tuning runs to date. The predecessor model set the previous benchmark at the Nürburgring-Nordschleife with a lap time of 8:23 minutes. The prototype of the new MINI John Cooper Works GP went round the legendary “Green Hell” in less than eight minutes – and its testing programme is not yet over. 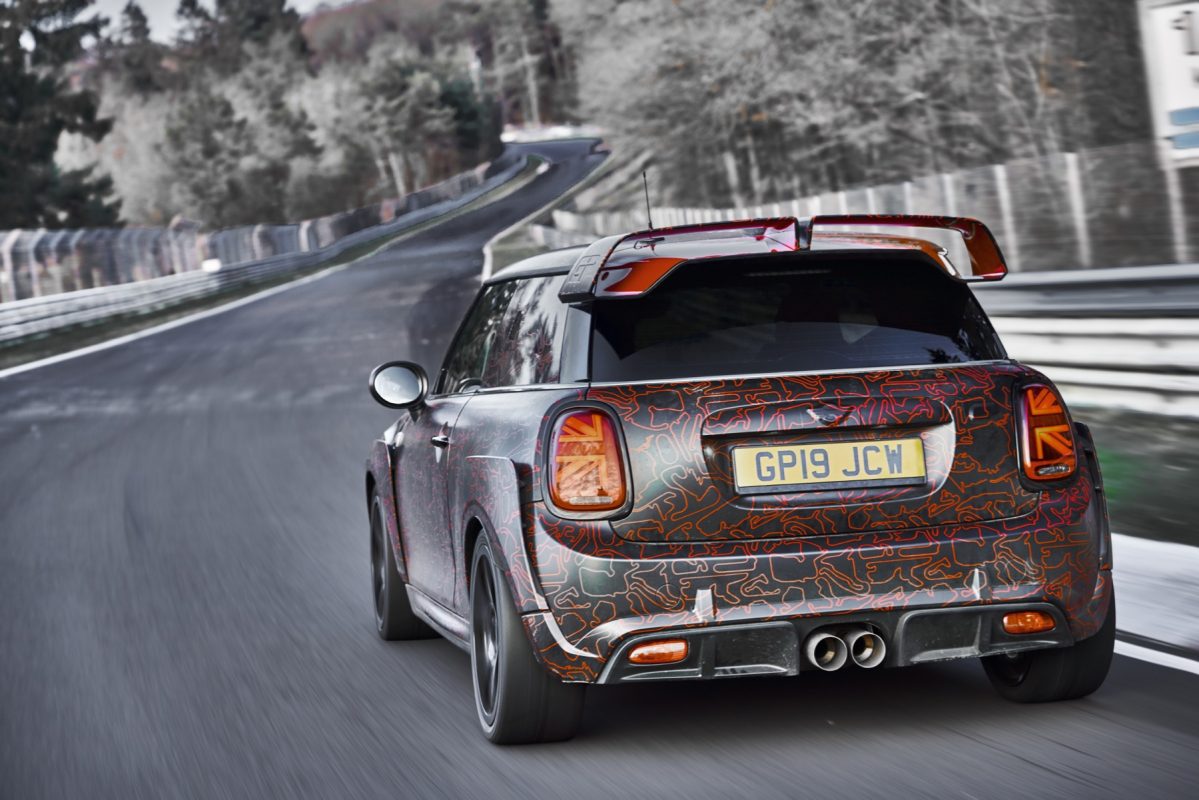 The prototype of the new MINI John Cooper Works GP won’t be pushing the limits during its demonstration run at the Nürburgring, but it will hardly be able to hide its outstanding sporting potential even when driven in moderate style. A more than 220 kW/300 hp 4-cylinder engine with MINI TwinPower Turbo Technology under the bonnet makes for spirited sprint capacity and a captivating sound. Wide open air intakes, large light alloy wheels, the distinctive design of the front and rear aprons and the striking roof spoiler are its unmistakable features for inspiring performance characteristics – despite the disguise applied for testing purposes.

Racing enthusiasts at the Nürburgring can look forward to enjoying hallmark MINI race feeling from three generations. The prototype of the new MINI John Cooper Works GP will carry out its demonstration runs together with its immediate predecessor and also the MINI Cooper S with John Cooper Works GP Kit, which was unveiled in 2006. These two top-class sports cars, each produced in a small series of 2,000 units, expressed pure racing passion right from the start, since going on to become coveted collectors’ items. Their fascinating character is based on the concept of using the sporting MINI genes to develop a top-class athlete that is uncompromisingly focused on extreme driving pleasure – a principle that is taken to an even higher level by the new MINI John Cooper Works GP.

Official Gallery: The 2020 MINI JCW GP at the Nordschleif

MINI Takes the States 2008 is Officially On

MINI Launches the Book “Wash Me”