The punchline? It’s fast. But we already knew that having driven the almost identical BMW X2 M35i earlier this year. So what do these first reviews tell us MINI enthusiasts. Lets find out.

Just over 300 horsepower is quite a bit of oomph for such a relatively small car, and the engine’s power band is flexible enough not to draw attention to any torque deficiencies, especially since peak twist is available from 1,750 to 4,500 rpm. However, the transmission tuning is incongruously punchy in Sport mode, with the standard Aisin-sourced automatic gearbox delivering hard-slap cog swaps during aggressive acceleration, especially when triggered by the small (but easy to grab) paddle shifters. Strong launches paired with slight wheel turns can yield incremental torque steer, that yaw-inducing tendency that’s reviled by many but adored by hooligans. Handling is a bit less controversial, with a somewhat mild steering ratio and relatively lengthy wheelbase yielding flat, easy-to-manage entry into corners and predictable dynamics that benefit from the reinforced chassis and retuned suspension. 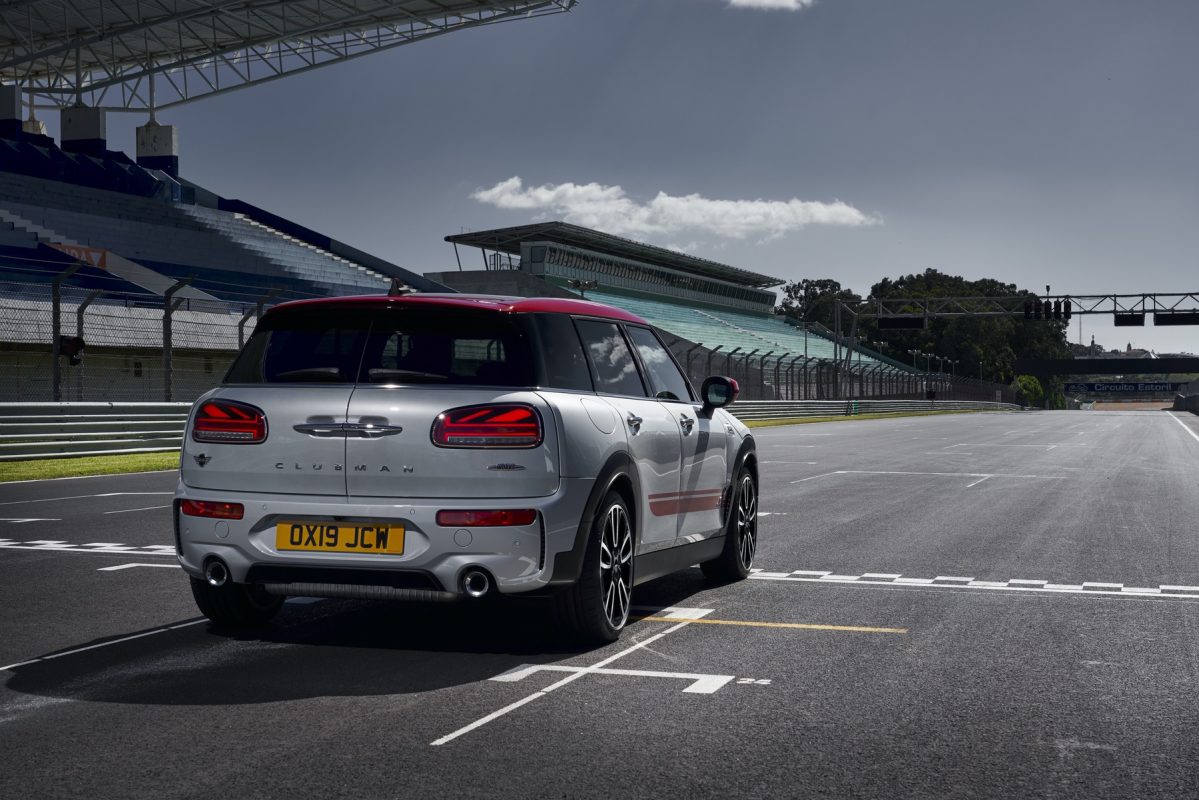 One of the characteristics that I look for in a car is my ability to place the front wheels exactly where I want them. Most hot hatch street cars are a bit vague when it comes to this. I can get them to within a couple of inches either way most of the time, but it’s a bit hit or miss. Not so with this Mini. Here I was able to hit my marks every. Single. Time.

Add in a wide power band—peak torque is available from 1,750 RPM all the way to 4,500—AWD to get that power down and its diminutive size to navigate the narrow roads, and the Mini starts feeling a hell of a lot less like a family hauler to me and way more like the hot hatch performer that it is.

Though it is quick, the question of whether it’s fun is debatable. The JCW Clubman certainly handles well enough, but the steering lacks the traditional fast Mini ‘go kart’ feel — understandably, since the Clubman isn’t designed to be as much of a driver’s car as the smaller, two-door hatchback. There’s also no option for a manual gearbox. Instead we get an eight-speed automatic, so the sense of driver involvement is reduced noticeably.

Disappointingly, the JCW Clubman lacks the soundtrack we’d expect from a fast Mini. Older JCWs were celebrated for the cheeky pops and bangs emanating from their exhausts on the overrun and with every gearshift, but there’s no such drama here. According to Mini, new laws concerning noise limits has forced the company to neuter the sound, and the overall driving experience suffers as a result. 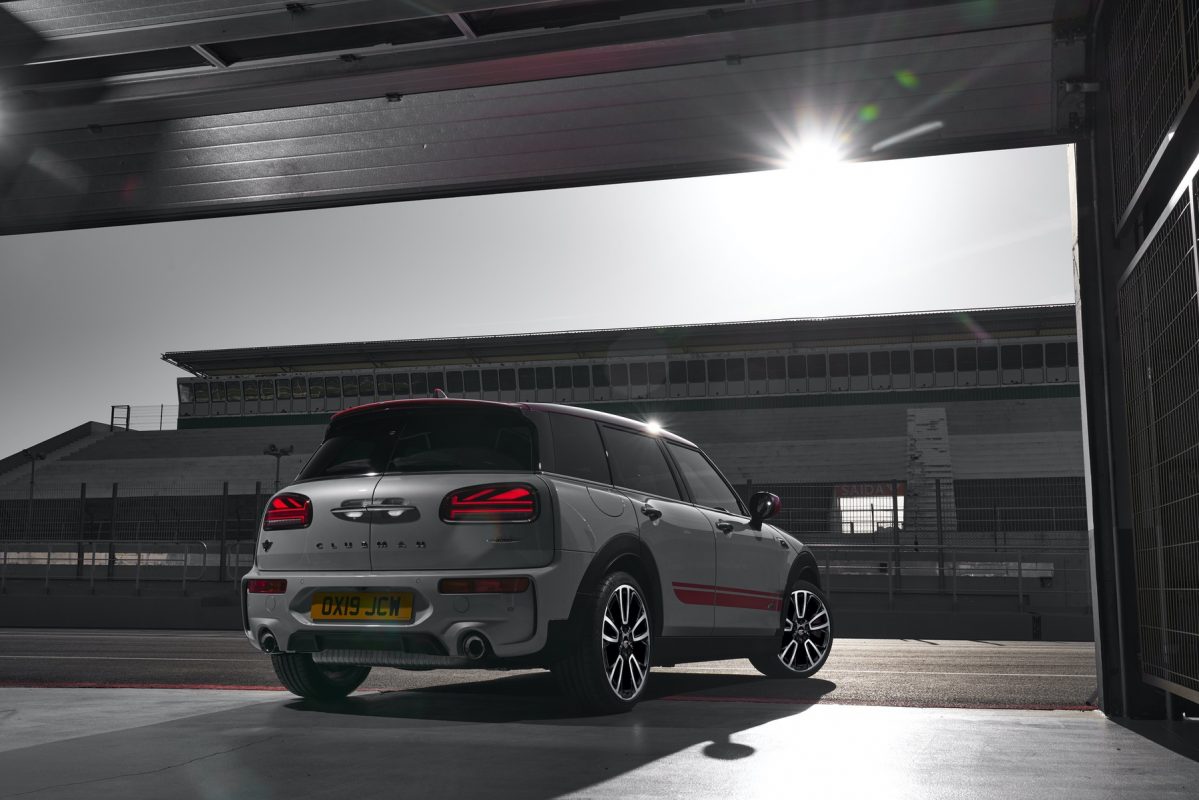 German country roads outside of Frankfurt, with stunning rolling hills and abundant farms, served as the location for our drive before some high-speed autobahn fun. Turn on the engine, and you’ll hear a nice roar coming from the exhaust, amplified through the speakers inside the cabin. And once you get rolling, this JCW Clubman can be pretty fun to drive. Step on the throttle, and you’ll immediately feel the torque being delivered to the tires as you gain speed. Mini says the JCW Clubman can get from 0 to 62 mph in 4.9 seconds, which means it’s 1.4 seconds faster than the 2019 model. And it feels quick. Whether you’re driving it on the highway or on side roads, the JCW Clubman is energetic. It also doesn’t feel as big as it looks, as its chassis has been tuned for a sporty drive.

During our run on the autobahn, we saw speeds of more than 150 mph, and at those high speeds, the car felt stable. The steering provided a nice feel of the road, and the suspension did a good job maintaining the body control. Even at higher speeds, the punchy engine reacts well to throttle inputs.

The transmission is quick and the shifts are smooth, but Sport mode, our preferred setting for country roads, offers a different experience. The throttle mapping, transmission behavior, steering feel, and suspension settings change dramatically. With the shifter in manual mode, you’ll have fun getting to the redline with the paddle shifters, as the car leans into corners with energy. As with most Minis, this JCW Clubman provides a firmer ride; our model was equipped with the 18-inch wheels, but the two-tone 19-inch JCW wheels are optional and look way better than the 18s.

Unfortunately for MINI enthusiasts there’s not a lot in these first reviews that seems particularly insightful or unexpected. The cumulative opinion seems to be that new Clubman JCW is fast, quirky and a few thousand more than rivals. Luckily we’ll have our own more in-depth take on the JCW Clubman in the months ahead.

MINI Fashion – The MINI Gentleman’s Collection Inspired by the Clubman