Ahead of its world debut in LA this week, MotoringFile got a special preview of the highly anticipated MINI JCW GP 3 and access to the very people that who created it. We spoke with designers, engineers and even got some hot laps courtesy of the chief chassis engineer himself. This is what we learned. 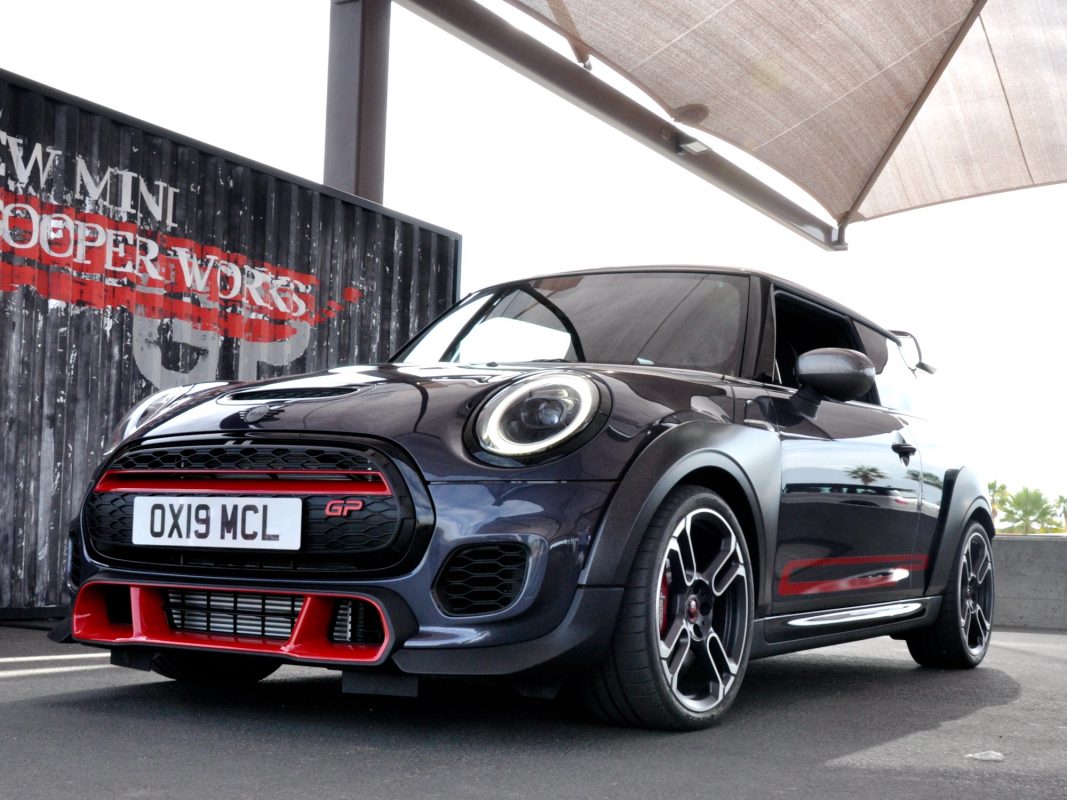 The GP came about very quickly – in just under two years. That meant that the team creating the car had to make a bunch of bold decisions very quickly. Chief among these was to push the envelope in terms of MINI’s design language. The most obvious (and controversial if you look at our comments) are those boxed fenders. The concept had been around the MINI design studio for some time but was deemed too aggressive for most models.
Then came the GP which, according to people we spoke to, felt like the perfect model for such an outlandish element. 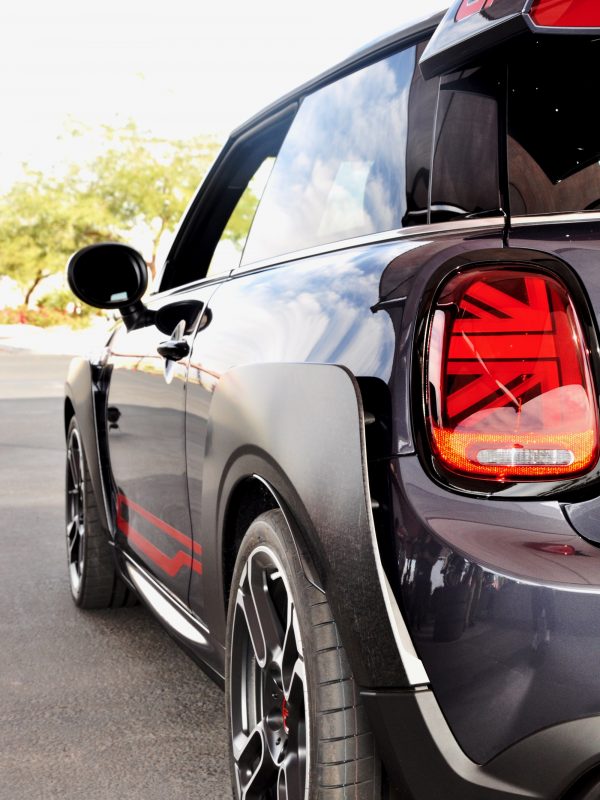 But these aren’t just design for design sake. The boxed fenders are functional in two ways. For one they widen the car covering the wider track and larger tires. Second the chief engineer on the program explained to us that they help air-flow around the car. While the difference they make isn’t dramatic, a MINI going 165mph could use all the air-flow help it can get. 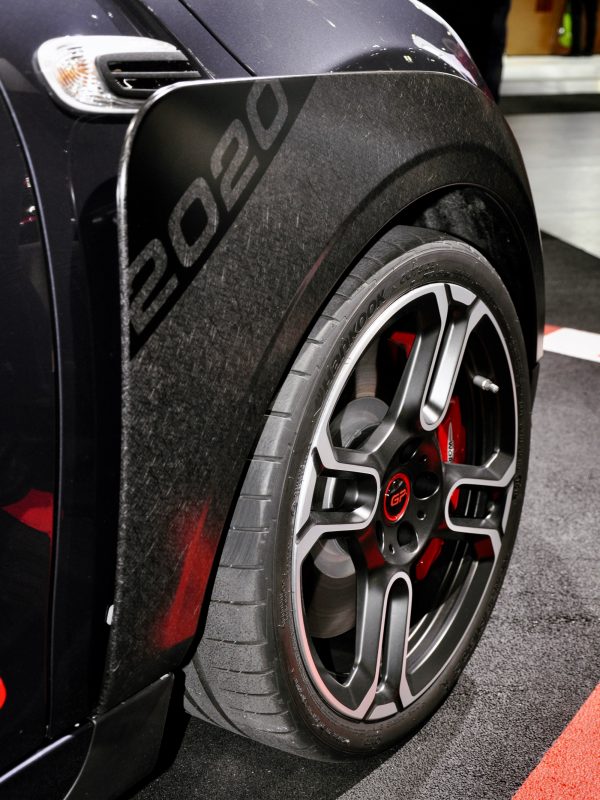 To create the strength needed while minimizing weight, MINI decided to leverage BMW’s carbon fiber expertise and produce them out of a thermoplastic substructure and an outer shell made of carbon fibre-reinforced plastic (CFRP). That webbed pattern is known as CFRP fleece, a refined material that is recycled from the production of the BMW i3 and the BMW i8. Finally the components are produced at the carbon neutral Moses Lake factory in Washington State where BMW produced almost all its carbon fiber components. 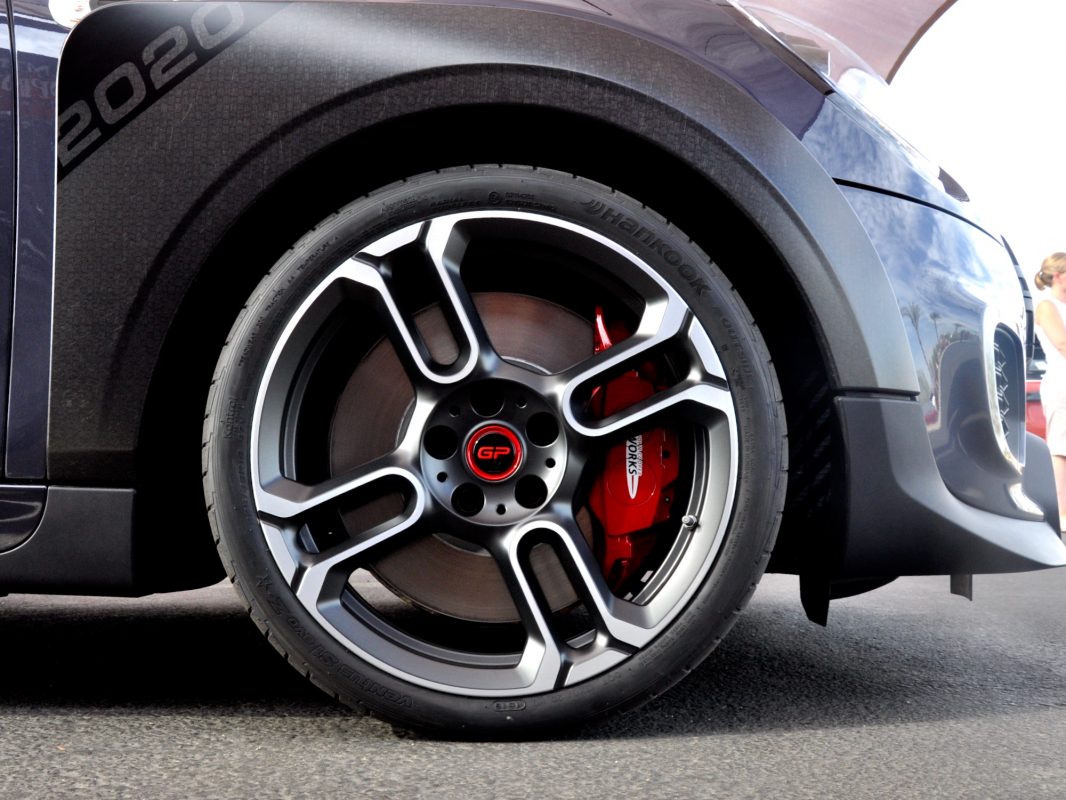 That 2020 number on the side of the car? It’s the production number of the actual GP and is printed on during production using a unique process. 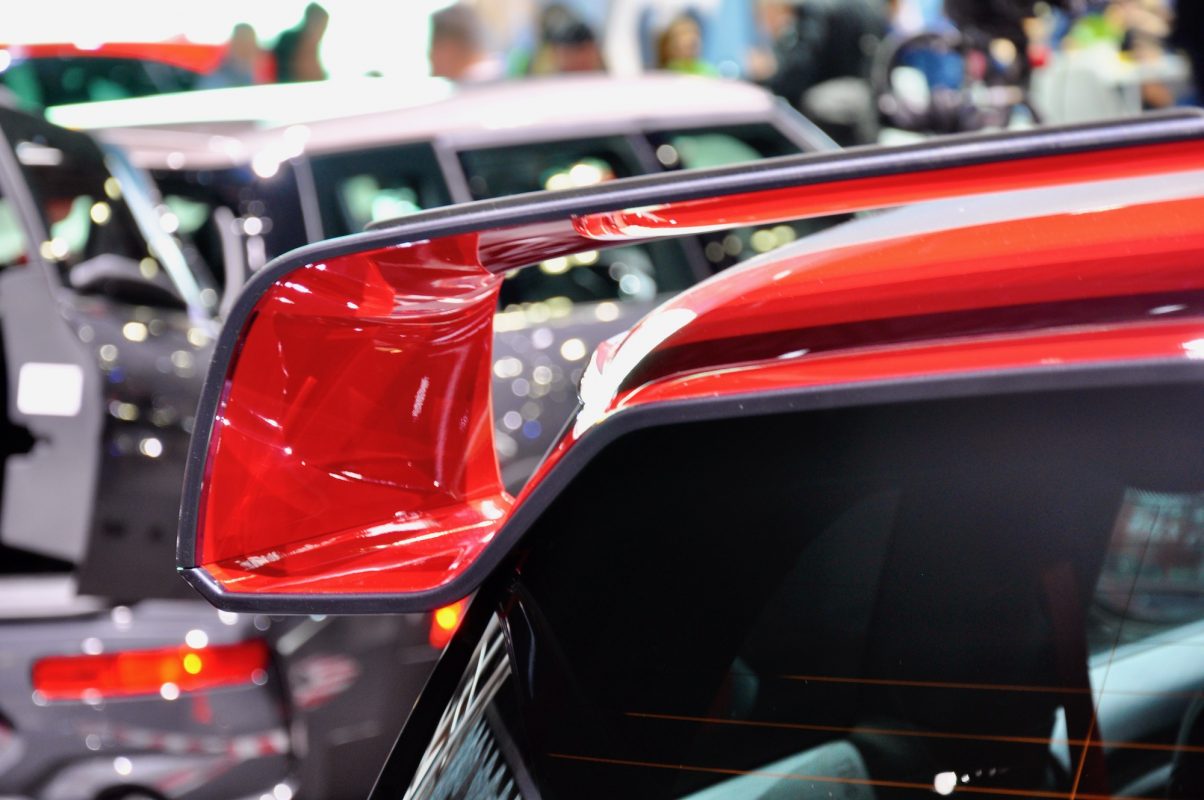 The large rear wing is functional and produces the first measurable downforce on a GP. In turn that helps put more weight on the rear of the car (with the GP needs due to no seats) creating more grip and stability at speed. 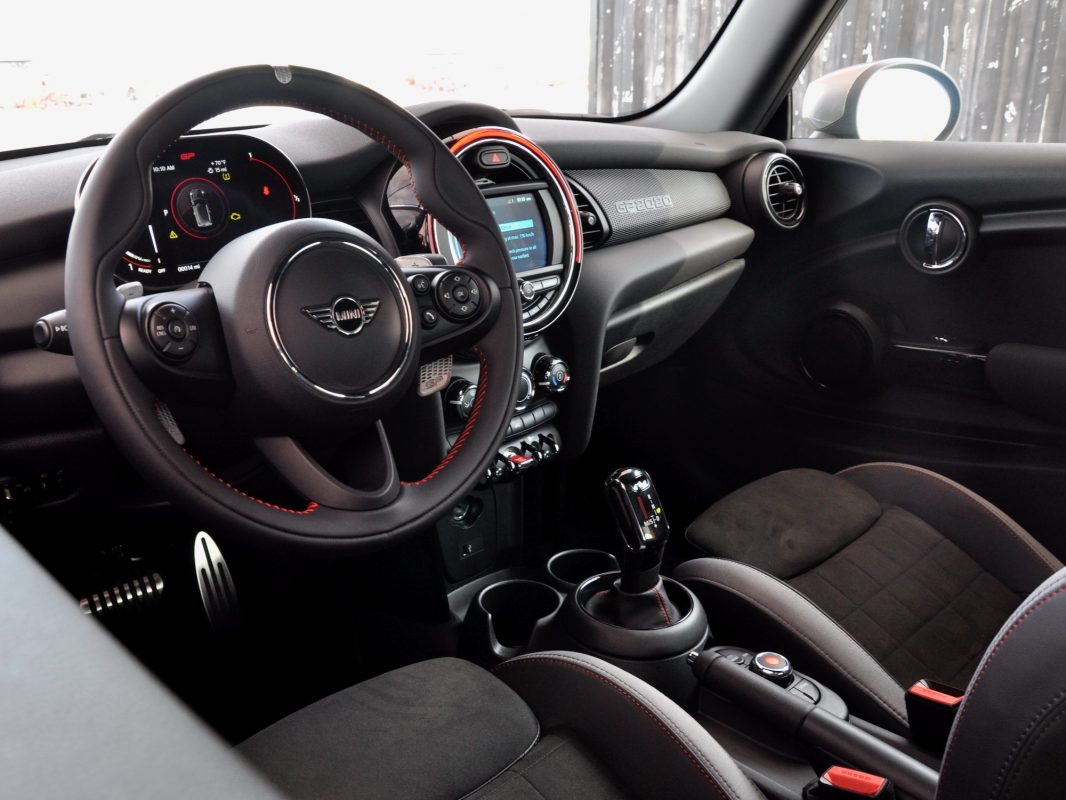 Inside the GP makes use of the new digital cluster with unique software to further differentiate it from the standard JCWs (which will get this display beginning with 03/20 production). Upfront it’s mostly carry-over with seats and most other materials taken from the standard JCWs. The exception is 3D printed aluminum shift paddles and 3D plastic trim with each GP’s individual production number. 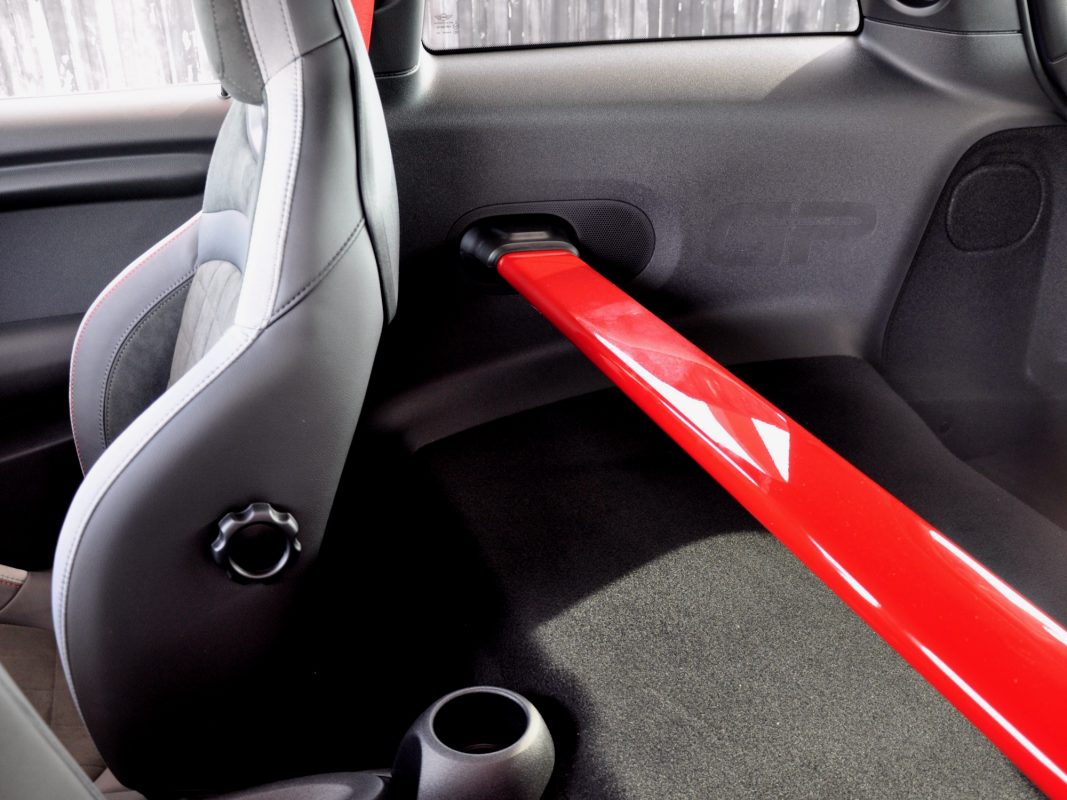 In back things get more interesting with the rear seats removed and a red brace fitted. Fit and finish is miles ahead of both previous GPs with trim and carpet cleanly covering what was two seats. Sadly the brace is not a structural component. Similar to previous GPs, its purpose is to keep any luggage from shifting into the passenger area (something that is regulated in Germany).

While we weren’t allowed to drive the pre-production GP on hand, we did have a handful of hot-laps courtesy of the man responsible for its final tuning. Early conclusions? It’s always hard to get a know a car from the passenger seat. However we know enough about the technical of the new GP and the current JCW range to get a feel for its performance. 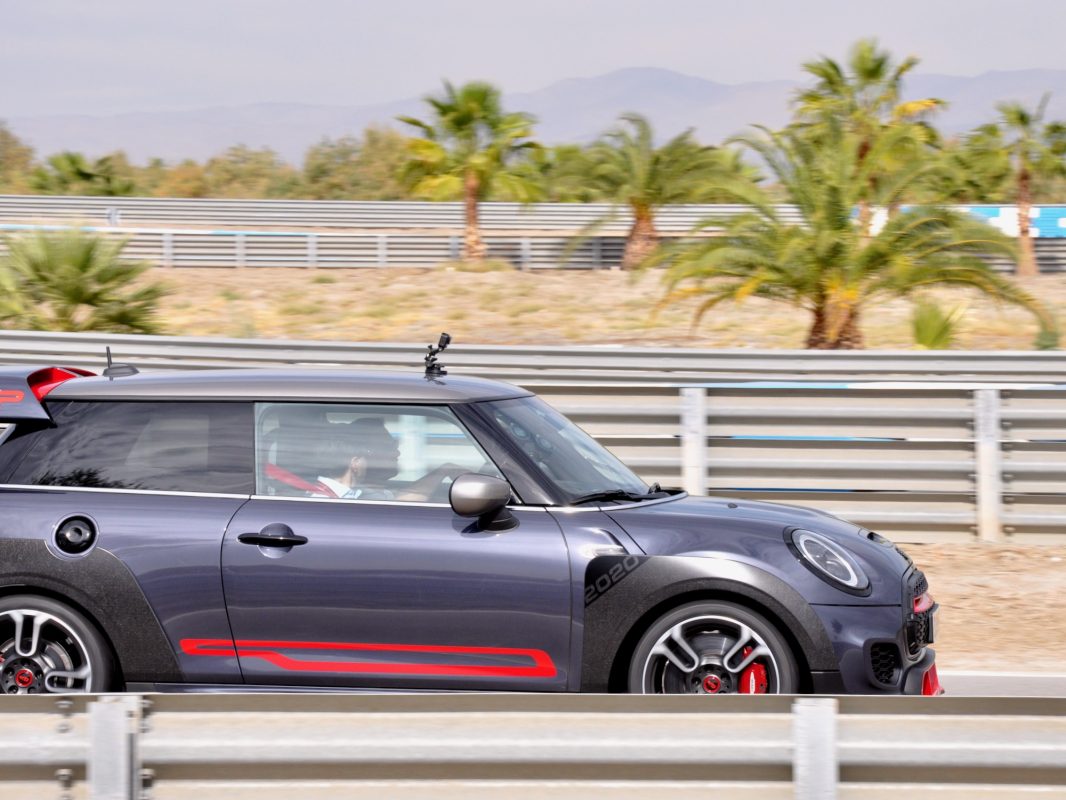 In talking with the lead engineer one thing is very clear – this is by far the fastest GP of all time. In fact they couldn’t really benchmark against the previous GPs because of the dramatic performance differences.

They also made the driving experience unabashedly front wheel drive. That means MINI specifically wanted this car to feel raw and “not too clean” in the words of the lead engineer. What that will mean in our hands and yours remains to be seen. But it was clear that there was precision in every input despite 300 HP going through the front tires. 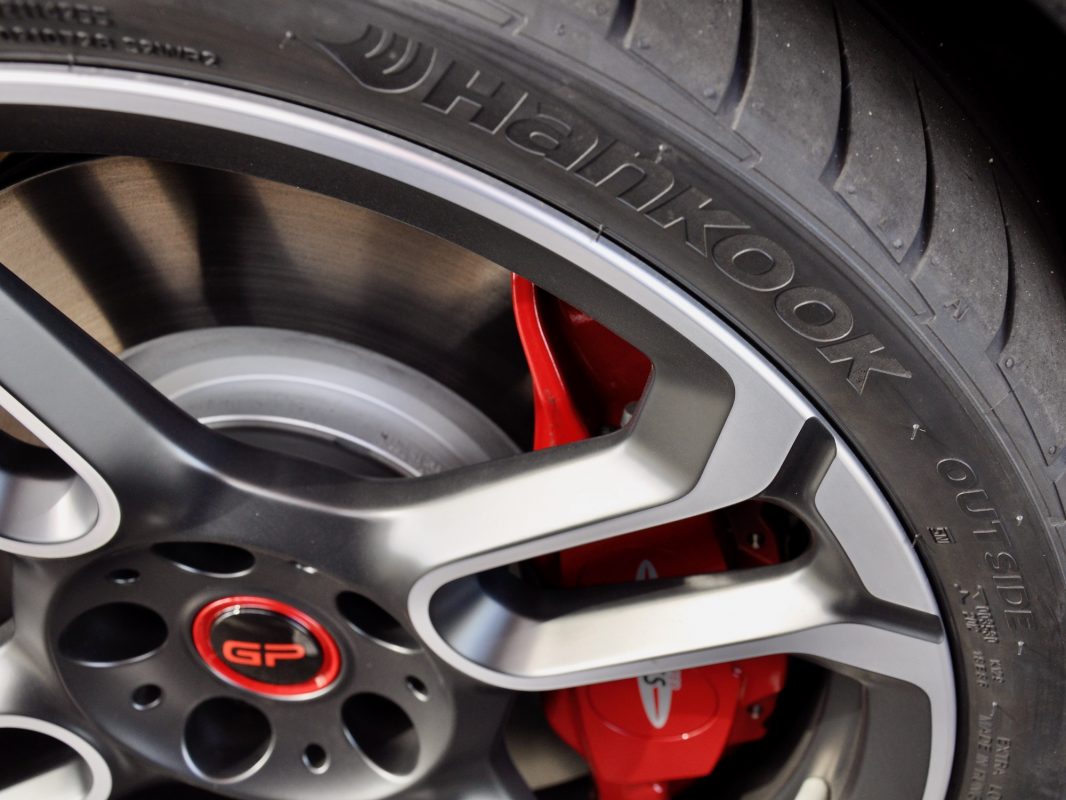 The 14″ front brakes are taken directly from the new JCW Clubman and Countryman but instead of being made out of aluminum, MINI has gone with steel calipers for better heat dissipation. While there’s an increase in unsprung mass, there was concern about the longevity of the calipers given how often GPs will likely be tracked. However pro-tip for all those out there who are buying a GP and won’t be tracking it. If you want to shave some unsprung mass off your car swap those calipers. 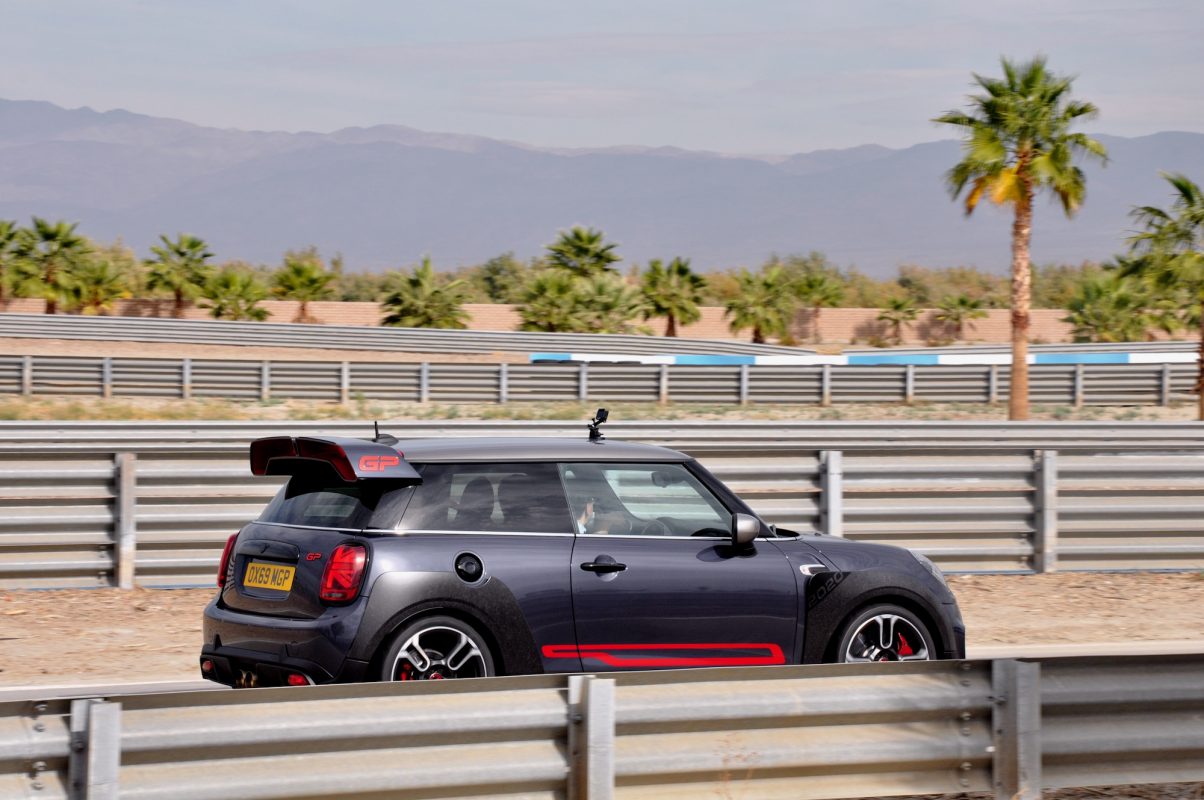 While the power figure gets top billing it’s the other tweaks that will likely make this car so special. Like the recently revised JCW Countryman and Clubman, MINI has revised the suspension and various hardware in the car to increase rigidity. Combined with a wider track and optional cup tires this allow the GP to not only generate enormous grip but produce more direct feedback than the standard JCW model.

Weight has been shaved in numerous ways – sound deadening being a key one. But the addition of larger brakes, more cooling and chassis components make the savings around 10 KG or 22 lbs. These cars are so optimized that gone are the days where you could strip 88 lbs out of a MINI a la the GP1. 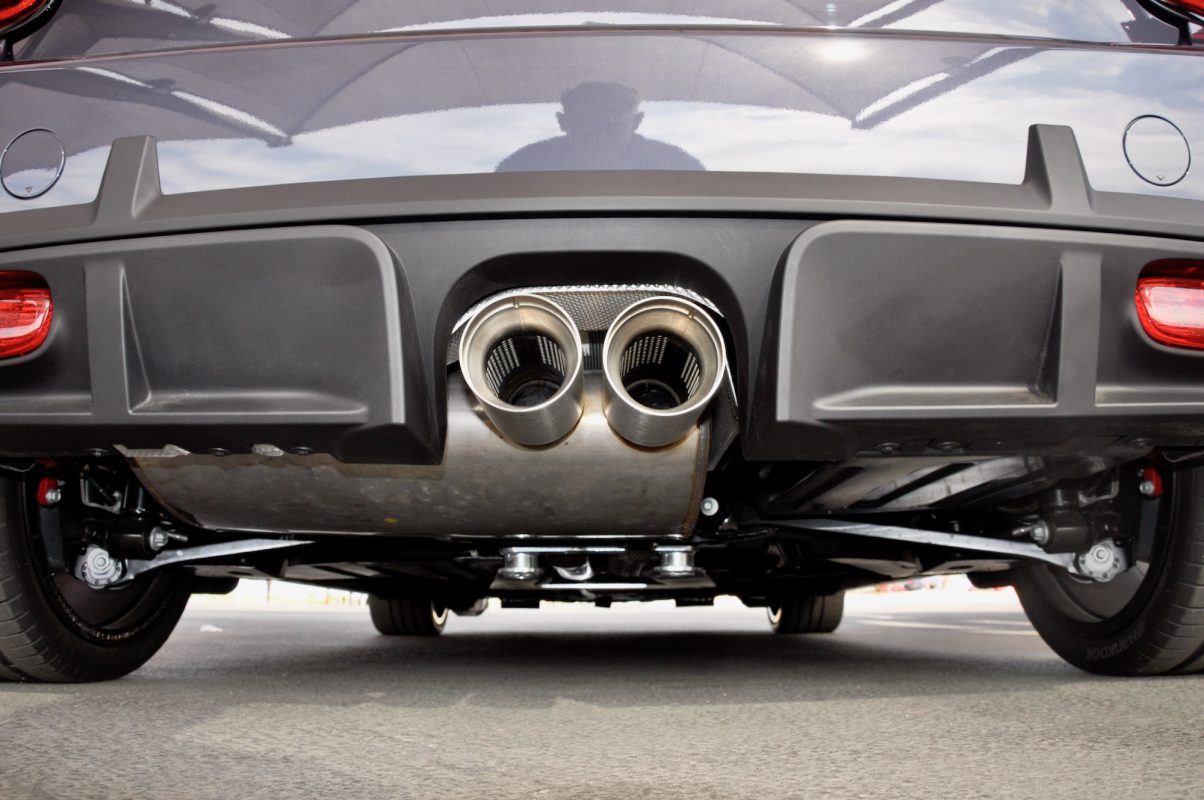 The soundtrack was a bit more subdued than we had hoped. However this was a European spec car with the WLTP regulated plumbing. MINI USA has assured us that the non-Euro cars will be the best sounding GPs sold due to losing those bits. Yes America – you’re finally getting something better than Europe.

The passenger seat conclusion? Stepping out of the car we were left with an impression of an immensely capable car with both high-levels of precision and refinement while still feeling at times like a complete monster. 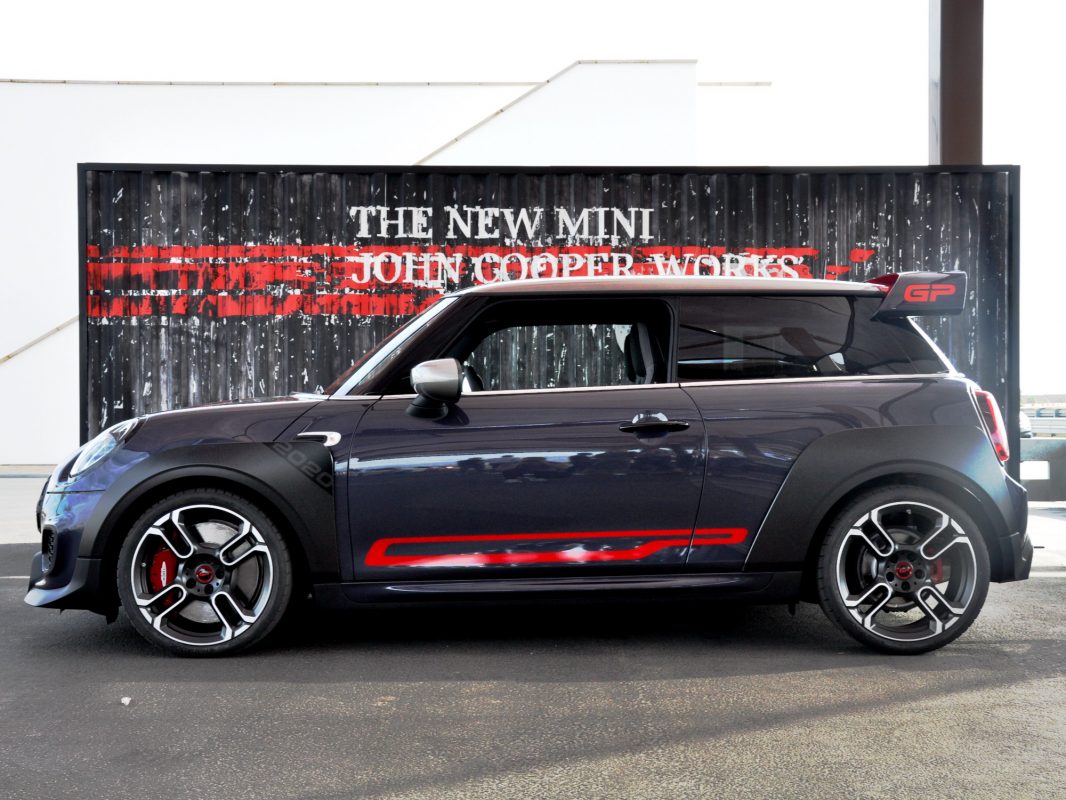 It’s too early to say anything definitive in terms of driving experience but this is clearly a special car. For the first time MINI has created a GP that stands head and shoulders above the standard JCW on which it’s based. Despite the short time it took MINI to take this car from concept to production, the JCW GP 3 is a seismic shift for the brand. It’s a true performance car in every measure and seems to finally fulfill the promise of what the GP should be – the ultimate MINI. 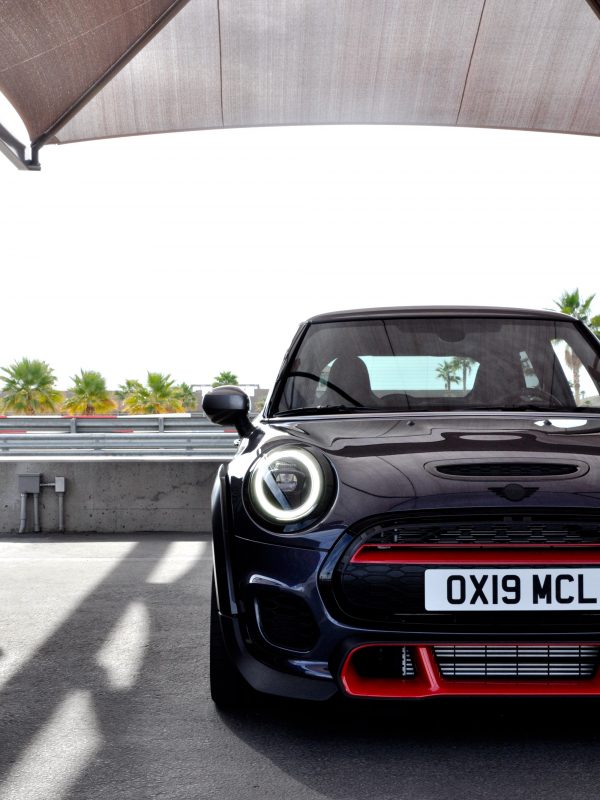