Get ready for MINI’s global marketing push with the new all electric MINI Cooper SE. Here MINI takes it’s first full production electric car to the mountains. It’s a far cry from the Miami launch we just came back from (review embargoed until late Wednesday) but actually looks a lot more fun to us. Read on for the story and some breathtaking photos. 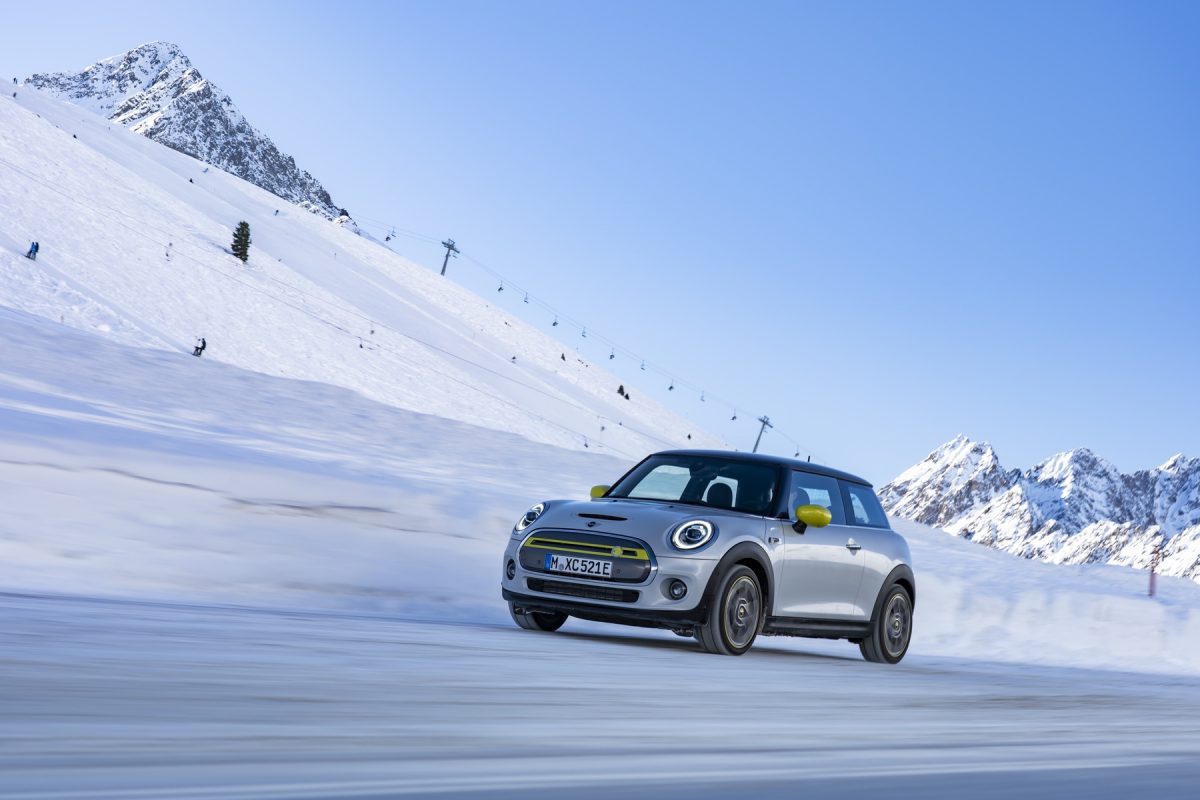 The mountain calls – and never more so than in winter. In fact, there is an entire choir of mountain peaks which are attractive for winter sports fans particularly in Munich and the surrounding area. A spontaneous awayday for skiing or sledging is a very appealing option for residents living in the Bavarian capital. After all, even from the inner city, the mountains appear to be enticingly close. Moreover, a day trip to the snow provides the ideal opportunity to try out new terrain for electromobility beyond the city traffic and test the qualities of the new MINI Cooper SE in winter times. 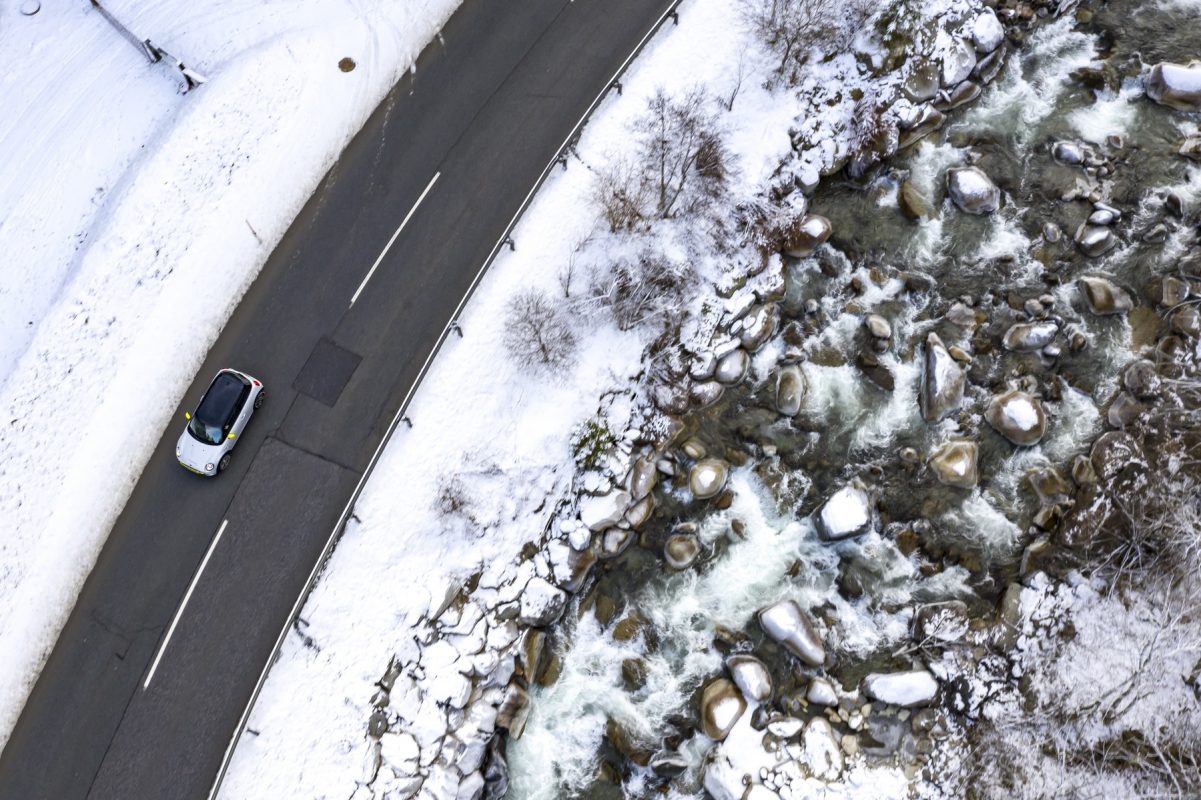 There is a big selection of winter sports resorts that are accessible even after a short road trip, but one thing is clear from the outset. The all-electric MINI is ambitious. Sölden, Austria, is entered in the standard navigation system. Thanks to its location at an altitude of some 1 350 metres and two glaciers within the ski area, this resort at the heart of the Tyrolean Ötztal valley has the reputation of already being snow-sure in late autumn. It is a local destination accessible with zero emissions. The distance between BMW Welt in Munich and the valley station of the Gaislachkoglbahn cable car in Sölden is exactly 200 kilometres.

The range of the MINI Cooper SE determined in the official test cycle is between 235 and 270 kilometres – values that can also be achieved in practice provided that the entire power of the 135 kW/184 hp engine is not constantly used. The route from the south of Munich to winter fun initially takes drivers onto motorway 95. Soon the Alpine foothils start to reach for the skies on the right and left of the road. A relaxed journey in GREEN mode activates an accelerator response geared to efficiency and takes the MINI Cooper SE close to the Zugspitze mountain. From Garmisch-Partenkirchen, the road leads in a south-easterly direction towards the border between Germany and Austria at the border town of Mittenwald. 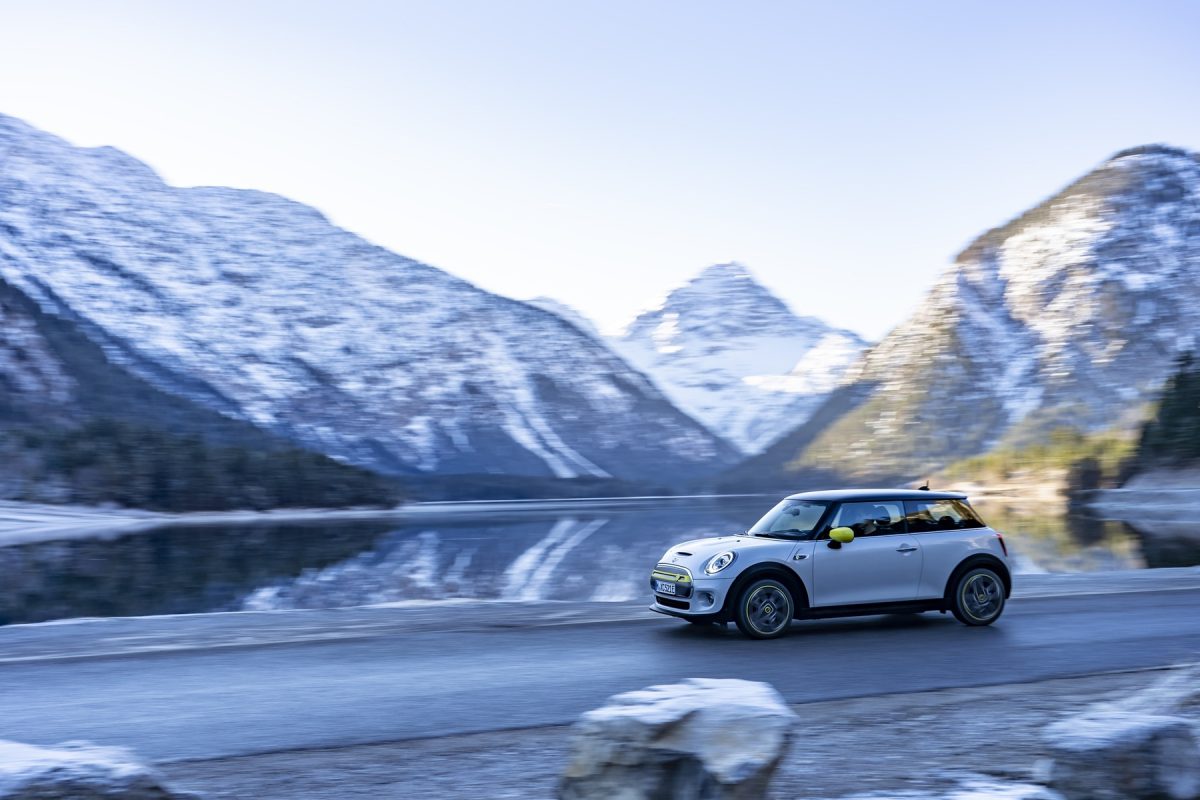 Alternatively, the MINI Driving Modes can also yield the GREEN+ setting where the heating is additionally deactivated to reduce electricity consumption and extend the range. However, this is not really necessary. The MINI Electric has been equipped with 2-zone automatic air-conditioning as standard, the interior heating is generated by means of a heat pump which extracts heat dissipated from the motor, drive control and the high-voltage battery, and from external air, and all these heat sources are combined to produce comfortable temperatures. The heating is based on particularly high efficiency and uses up to 75 percent less energy than a conventional electric heating system to provide excellent climate comfort even when operating in winter temperatures. There’s therefore absolutely no reason to already be wearing a ski jacket, hat and gloves during the actual trip. Especially since the boot offers plenty of space to accommodate warm sports clothing alongside ski equipment and a toboggan. Because the model-specific high-voltage battery has been ingeniously located in the central tunnel and configured in the subfloor, the storage volume of between 211 and 731 litres in the boot gives precisely the same space as in conventionally powered versions of the MINI 3-door. 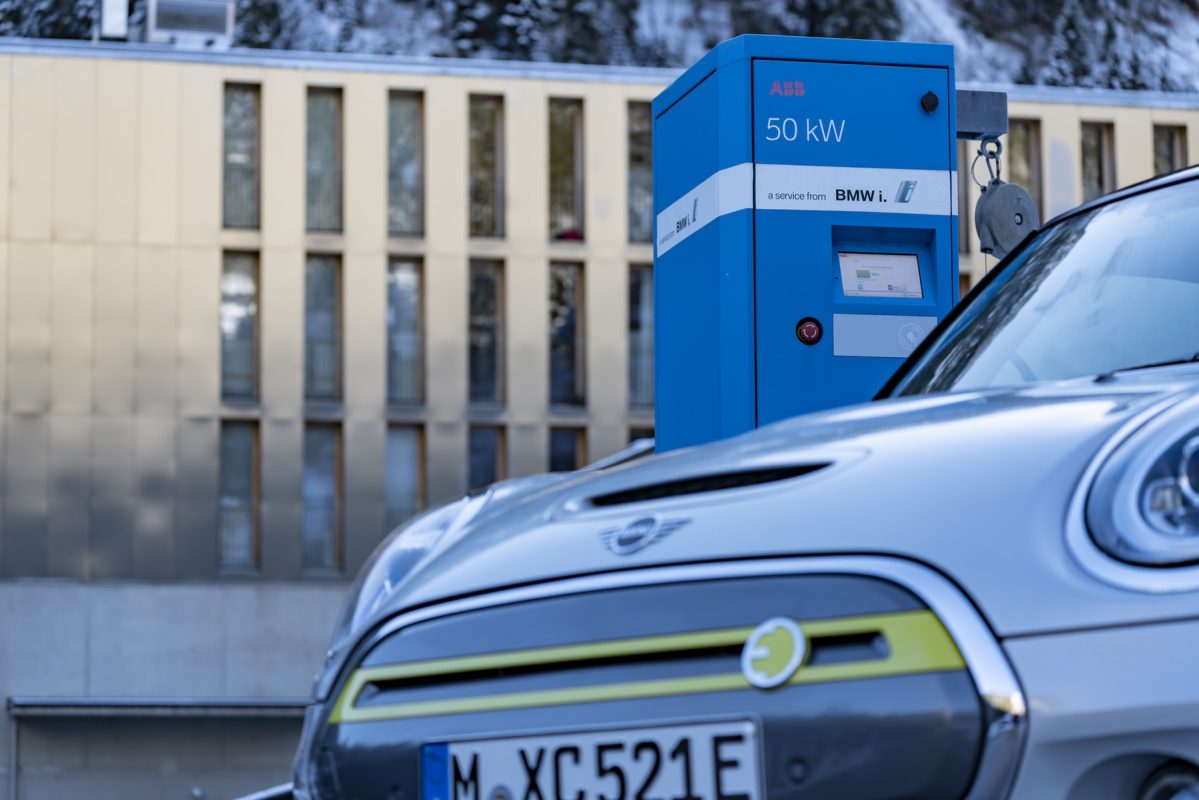 On Austrian country roads, the MINI Cooper SE is finally beginning to scent genuine mountain air. An altitude of almost 1,200 metres is reached in the Tyrolean village of Seefeld. There are ideal conditions here for cross-country skiing, but the MINI Cooper SE is in its element on the roads leading up to the pass. Hairpin bends and snow on the road offer generous scope to test the car’s talent for driving fun. Its drive stability control with actuator-operated wheel-slip limiter permit extremely fast and precise responses to changed driving conditions and enhance the agility so typical of the brand to an even higher level. 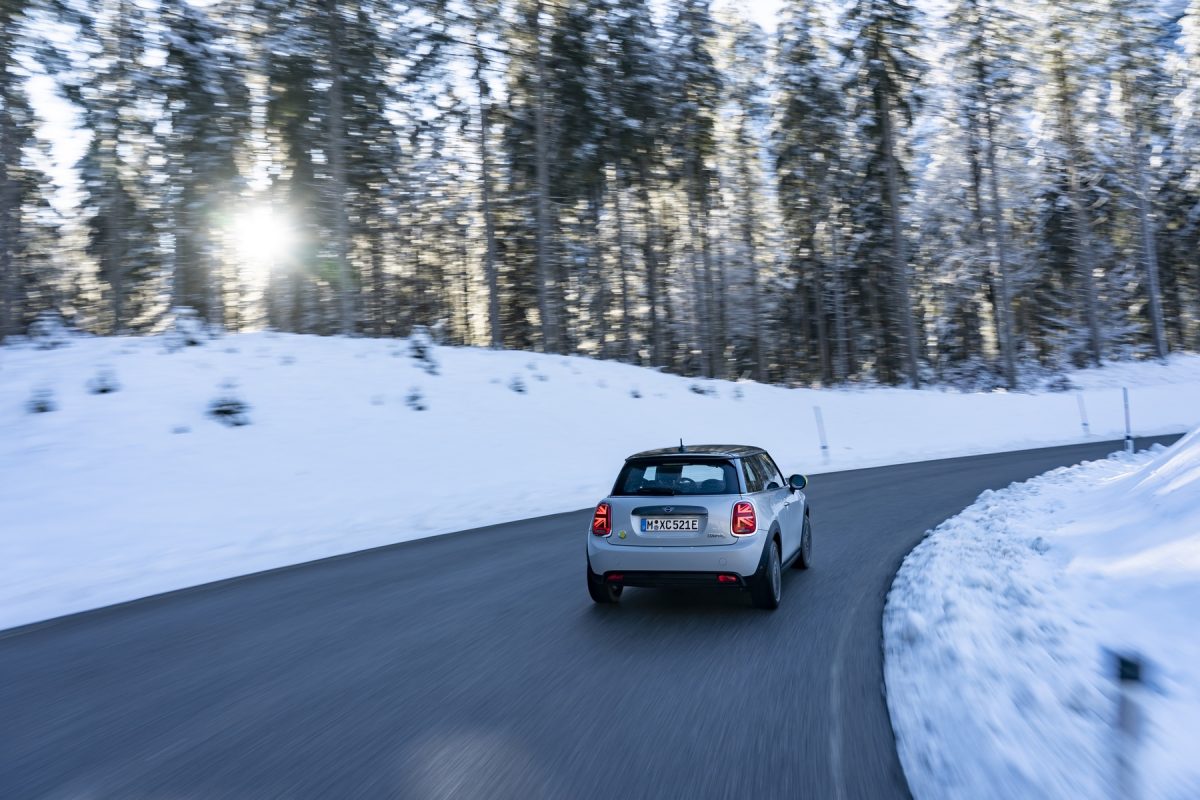 In spite of several enthusiastic sprints, some power-sapping uphill climbs and freezing weather conditions, there are still adequate energy reserves as the car reaches the outskirts of Sölden. This is where the BMW Group’s long track record of experience in the development and production of high-voltage batteries comes into its own. The storage capacity of the cells was further increased with the latest generation of battery technology used in the MINI Cooper SE. The cycle stability was also additionally optimised and this exerts a significant impact on the durability of the high-voltage battery. The warranty, valid for a period of eight years after first registration, was therefore extended to a distance of 160 000 kilometres or 100 000 miles. 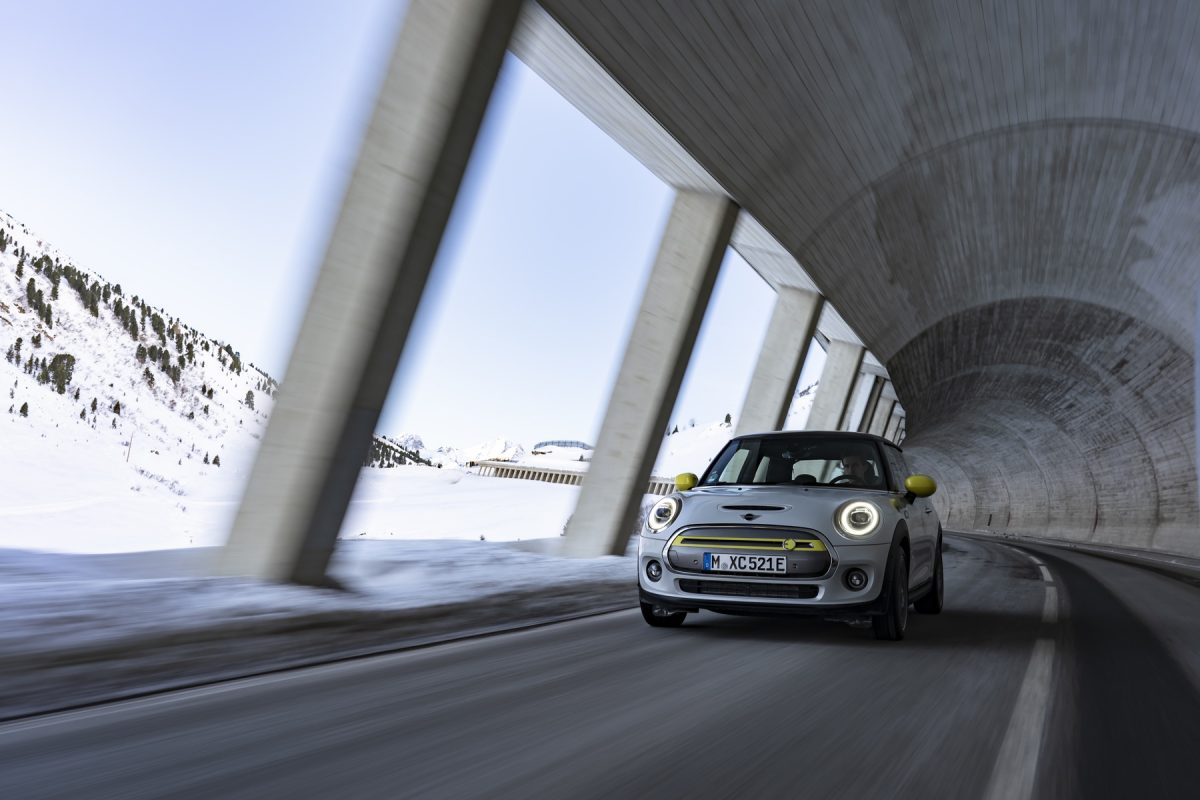 While the occupants are having a good time on the slopes, the MINI Cooper SE can recharge at a charging point close to the valley station. Charging capacity of 11 kW, similar to that generated at a MINI ELECTRIC Wallbox, is sufficient to fully recharge an empty high-voltage battery with energy in three and a half hours. Furthermore, the battery and charging unit of the MINI Cooper SE are also suitable for rapid charging with direct current up to 50 kW. This allows a complete charge in less than one and a half hours. 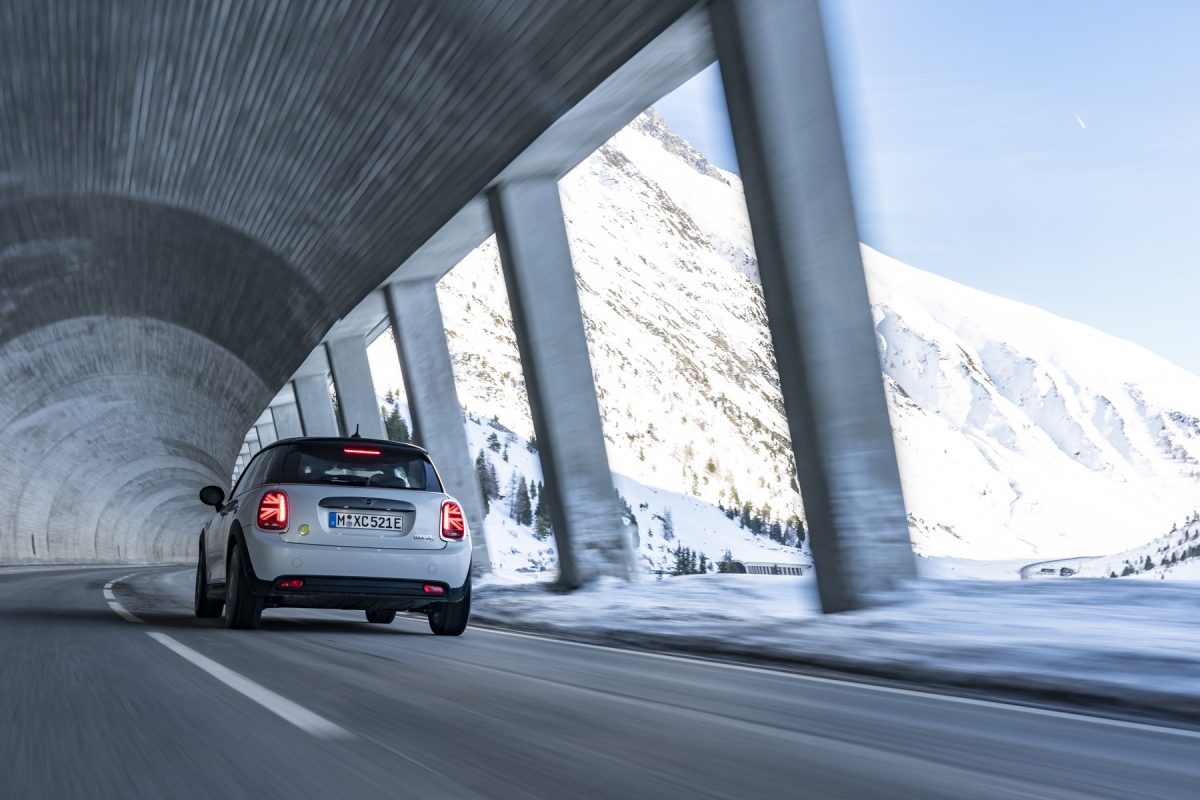 Timeout in the snow can be longer if desired. The Gaislachkoglbahn cable car takes skiers up to 3 040 metres in two stages. The trip up to the “Ice Q” mountain-top restaurant takes less than a quarter of an hour where the futuristic glass cube provided a film set for the James Bond thriller “Spectre”. Sölden offers ski runs totalling 144 kilometres with varying levels of difficulty and three main peaks over 3 000 metres in height. The highest peak is the Schwarze Schneid at 3 340 metres. Skiers are able to ski down from the summit along a slope 15 kilometres long and experience a difference in altitude of 1 970 metres. And there is a 7.3 kilometre toboggan run from the middle station of the Gaislachkoglbahn down to the valley. 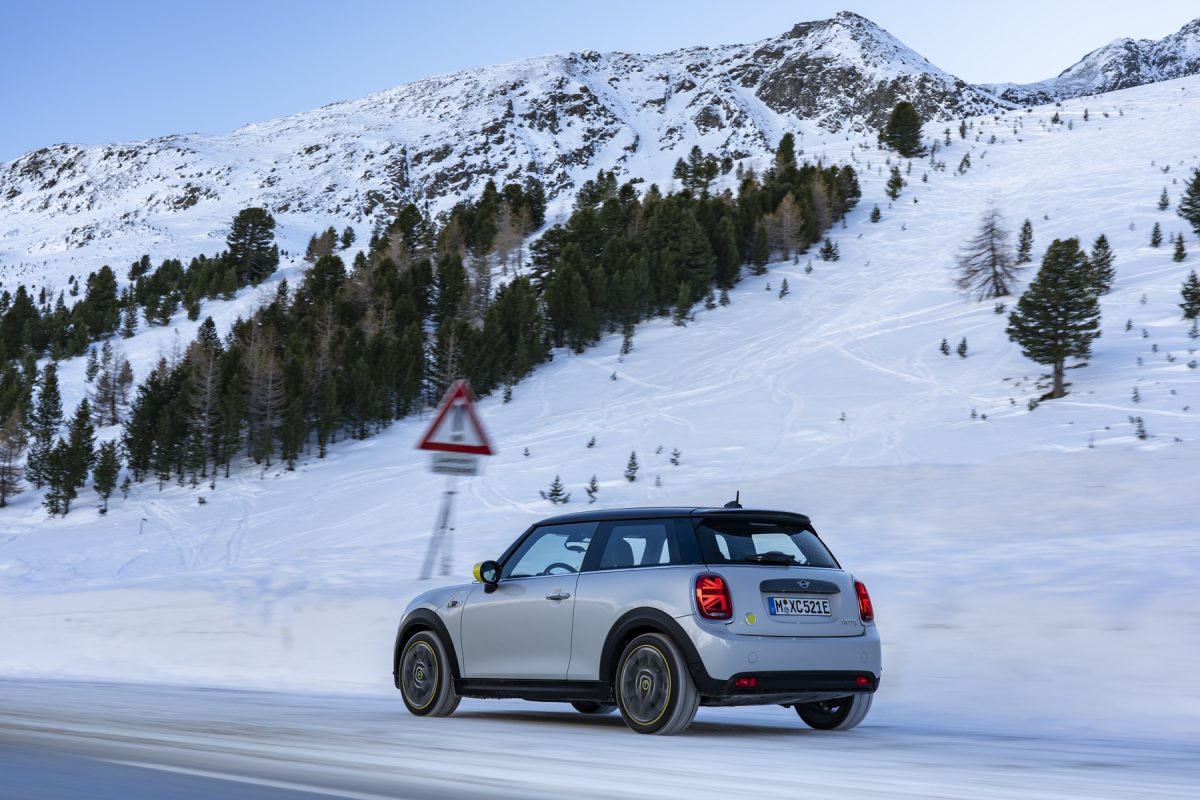 Shortly before the last downhill run of the day, it’s time to use the MINI Connected Remote app. The progress of the charging process is not the only parameter that can be monitored remotely. The independent car heater in the MINI Cooper SE can also be activated. When the desired start time is entered on the smartphone, its timer function ensures that the car’s interior is heated up in good time. Nobody needs to shiver behind the steering wheel in damp winter clothing. And the ice scraper is history. The verdict: Perfect for skiing and sledging, ideal for a return trip. 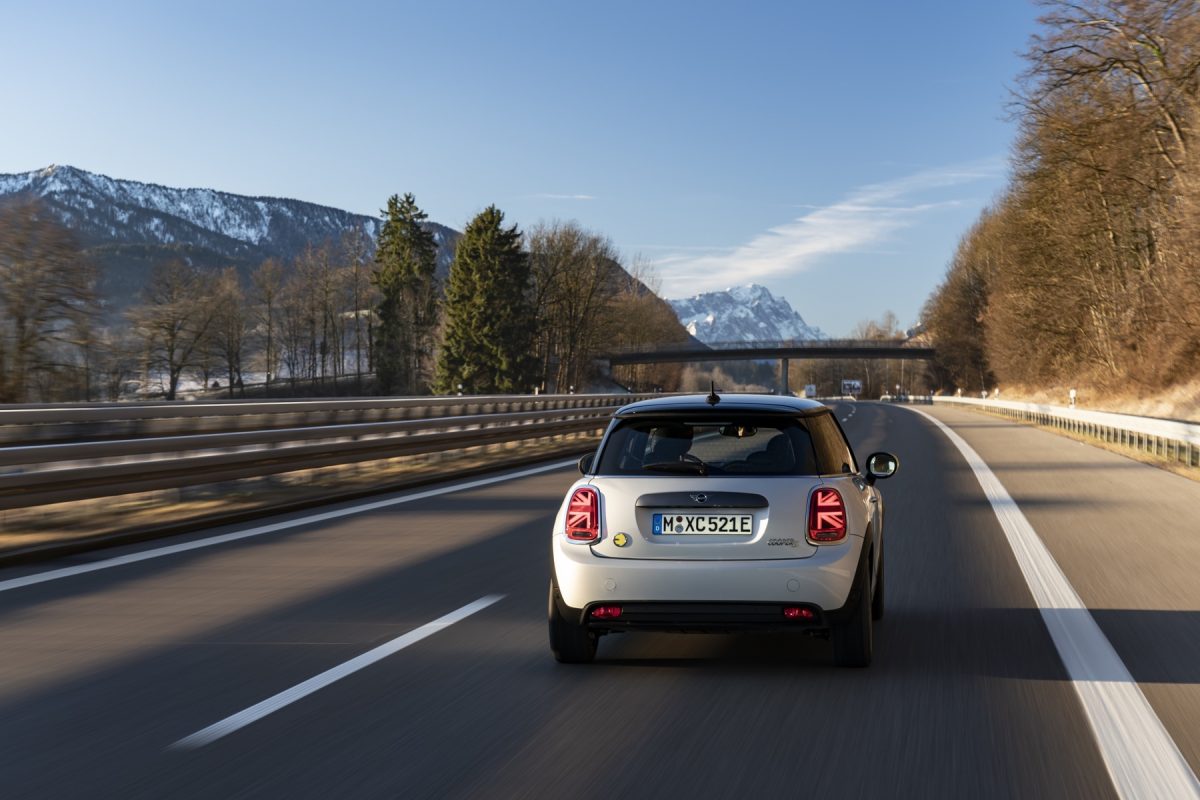 There’s certainly no shortage of envious glances through icy windows. In fact, the MINI Cooper SE proves to be a real eyecatcher generally in the Ötztal valley. People ask about the sales launch – from March 2020 – as frequently as they enquire about acceleration – zero to 60 in 3.9 seconds and the sprint from zero to 100 km/h in 7.3 seconds. It’s certainly no surprise that 100 000 people across the world have already registered an interest in the all-electric model with MINI. The first owners of a MINI Cooper SE will already be able to put the car through its paces as a piste shuttle in the current ski season. After all, there’s generally sufficient snow for a spontaneous winter-sports outing in Sölden up until May.

Worldwide MINI Sales Down For January