The addition of the ALL4 Countryman to the MotoringFile garage has led us to wanting to know more about the rather novel all-wheel drive system in the car. When we first drove the Countryman in May of 2010 we found that the system was purely a safety device and not intended to be a performance option. And all subsequent drives we’ve had with the car (including with our long-term test car) have reinforced that fact. But that doesn’t make All4 any less interesting from a technical perspective (or less relevant). So we wanted to get past the marketing and hype and understand the technical details of All4. All4 is a product of GKN Driveline, a leading global producer of CVJ Systems, AWD Systems, Trans Axle Solutions and eDrive Systems. The heart of All4 is GKN Driveline’s Electro Magnetic Control Device (EMCD®). It’s an actively controlled coupling on-demand and full-time all-wheel-drive drivelines as well as in axle applications. And according to GKN, EMCD is a most compact and versatile electronically controlled driveline and axle coupling on the market. 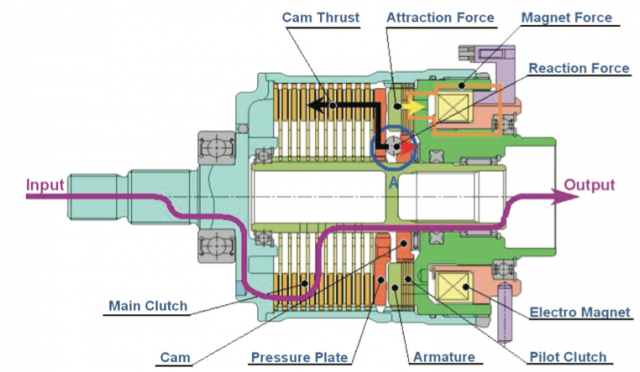 The system allows up to 50% of torque to go to the rear wheels when the system detects front wheel slip (any more wouldn’t make sense from a weight distribution prospective). However under cruising conditions (on a highway for instance) the ALL4 equipped Countryman is entirely front wheel drive.

The operating principles of the system are:

As we mentioned last week, there are some notable differences between ALL4 and BMW’s xDrive. First ALL4?s control unit is fully integrated into the DSC unit and thus transfers data much faster than a typical set-up (thus reacting to conditions faster). As described above, it works by a small clutch in the front detecting wheel slip and engaging the rear driveshaft. Unlike xDrive, it’s a simple system that doesn’t use complex electronics. As you’d expect the system is highly patented by GKN as they consider it fairly unique and effective solution.

In its entirety ALL4 adds 70kg (154 pounds) to the Countryman’s weight.

Yes All4 (or EMCD) is simply a safety option. But what MINI has done in selecting it as the technology is to make sure that there isn’t a huge weight penalty and thus performance and efficiency hit by adding the system. At the same time All4 is so effective at doing it’s job seamlessly that it’s hard to ever detect it on. And for the average Countryman All4 buyer, that’s likely music to their ears.

BMW Introduces an In-Car Virtual Assistant – is MINI Next?