Welcome to the F56 FAQ. We’ve taken your questions from recent posts and given them answers to the best of our ability hopefully to make the next generation MINI a little less of a mystery. As we know more we’ll be updating this post with better answers. Likewise as you ask more questions we’ll continue to answer them.

One note most of these questions have already been answered in previous MotoriingFile articles. For further information please check out the F56 section.

Q: Is the Cooper S and JCW going to be 2 litre L4 or the same as the one/cooper 3 cylinders 1.5 litres but more HP obviously ?

A: We’ve confirmed that the US will see a 1.5 three cylinder and the Cooper S will have a 2.0L four cylinder. Eventually the next generation JCW power plant will be based on the 2.0L four.

Q: Have been driving a jcw coupe for a while and have gotten used to the steering and feel of the R56 family of cars. Got some time behind a R50 again and the outstanding question I have would be is MINI going to reverse the trend for the steering feel in the F series. The difference in feel is night and day, still feel that I can place the R50-53 on the edge of a dime. However the R56 generation cars are numb in comparison.

A: I’d argue it’s not quite night and day but clearly there is a difference. We won’t know until we drive the car but MINI is aware that visceral qualities are important that the MINI brand. Make that what you will.

Q: Is there going to be a base price increase?

A: Yes. No telling what that will be but take a look at the historical data for good clues.

Q: How much of the car is brand new vs how much is carried over (if anything) from the R56?

A: Everything is brand new. Nothing is being carried over. 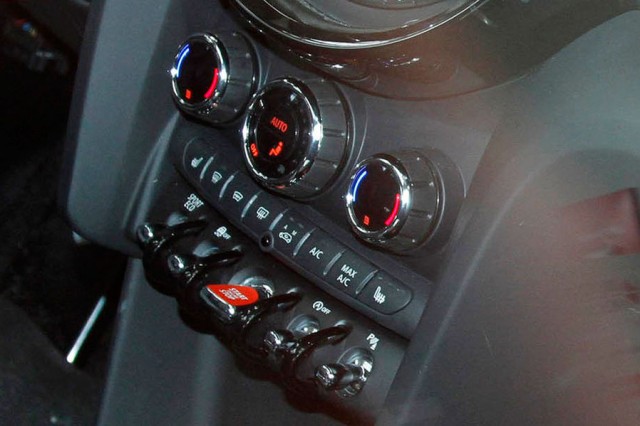 Q: The new dash layout is quite a bit disturbing. The design seems a forced bunch of differing technologies. Any hope this will change before production?

A: The new dash has been signed off on as of earlier this spring. The only thing that could potentially change is likely trim.

Q: What will be the engine (and so the power) of the Cooper SD?

A: A new 2.0 diesel. Launch time is still unknown. The 1.5L diesel should be available at launch in diesel friendly markets.

A: Yes we’ve confirmed previously that MINI will offer electronic damper control (option 223) on the F56.

Q: Will the 8-speed automatic version be available from the start on the Cooper S and will it include flappy paddles?

A: Yes as an option. And they should be pull/pull rather than the awkward push/pull current set-up.

Q: Is there a timeline for JCW, and Will it still have prince?

A: Look for the new generation JCW to launch around 18 months after the F56 this fall. That means Spring of 2015. It will have an entirely new and more powerful engine.

Q: Will there be any other grill options (JCW) that mask the giant gulping fish mouth?

A. There will be a JCW Aero-kit available likely in the spring. It’s unclear how it will change the look of the car.

A: For the first time it’s possible. If and when has yet to be decided.

Q: Will there be trim blackout options?

A: Unclear but we hope.

Q: Any ideas on the 4 different interior trim levels? Why does the spyshots show two different spoilers on the MCS? Are 18″ alloys confirmed as factory fit?

A: No. Likely due to different trim levels. Not yet but we’re working on it.

Q: Are there going to be different “lines” – think BMW’s lines (M Sport, Luxury, etc) for the specific models?

A: We believe so.

Q: All the talk so far has been about the 1.5L 3 cyl. Is that just for the base non turbo, or to include the S?

A: That’s on the Cooper and below. The MCS and eventually the new JCW will get a 2.0 four cylinder.

Q: Since 2007 the same 1.6L has been used across all models with 3 main power configurations. That’s 7 years with minimal power improvements & fuel economy using the same engine. ?
A: Ok that’s not a question but we just had to throw this statement in to emphasize the issue at hand and why MINI is moving to the 2.0L for higher output applications.

Q: Backup cameras as an option beyond the current backup detection system?

Q: Will the F56 really be as ugly as the spy photos revealed?

A: It looks better and much less flat in the front.

Q: is there going to be any “blind spot” option ? (oh please say yes)

A: We believe so.

Q: Will the taillights have a simliar look to the Paceman.

A: No but they will be larger version of what the R56 has.

Q: Is the F56 going to be the third MINI to have its name blasted over the rear hatch?

A: No because it would just say MINI. MINI believes the hatch should be iconic enough to be recognizable.

Q:How long after the F56 release will we see the revised Clubman? That is the car that is next in line for release, yes?

A: No. The next car scheduled for release is the F55 five door MINI. That should happen late next year with the Convertible following in the spring of 2015. Then we should see the Clubman shortly afterwards.

Q: Love the roadster; want the F56 goodies. Please tell me the coupe and roadster won’t end with the R56 platform.

A: It will continue production for a few more years. Exact timing seems to be shifting a bit but BMW typically has seven year product cycles.