Tony Nuzzo lives a life many of us could only dream of. But what’s it actually like to run and drive in a first class MINI racing team? Recently we had a chance to ask Tony that very question along with few others about the team, the car, and where to start when taking our daily driver to the track. 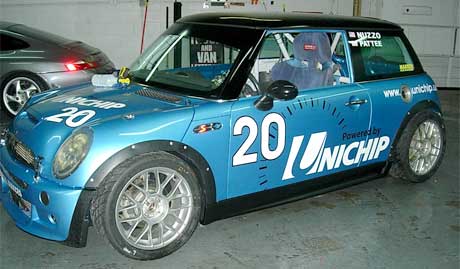 Nuzzo Motorsports were the first to podium the new MINI in North America, what’s next for the team?

We will run the Grand-Am series full time. Also we have news of an expanded team and new sponsors.

What preparations went into the cars for the 2006 race season?

We took cars down to bare metal to rebuild them completely. We are using the same colors with the exception of the roof being black this year. We wanted to keep the blue, it’s unique to MINI. More than any other car color out there. Electric Blue was the launch color here in the U.S.

I like red but I’m used to seeing the Electric Blue.

Will the third MINI have the same color scheme?

No, it will wear silver, dark blue, and red to represent the team colors of At Speed.

For MINI owners that want to club race or race in the Phil Wicks series, how important is suspension?

We run a custom external gas reservoir system for suspension. This gives us the adjust ability for the multiple tracks we will run in the Grand-Am series.

Grassroots racers will find changes from street to race suspension, from a week-to-week basis difficult, one of the keys is being consistent by being able to duplicate your settings for the race week-to-week. Also the weather and use of the track will change the surface each week.

What is most important for the driver when it comes to the cockpit? Comfort or safety?

Driver’s comfort depends on the safety system, depends on requirements.

Safety: first a good fitting, fitted, helmet. Most weekend racers have never been properly fitted for a helmet and buy one off the shelf. It is worth the time, effort, and money to get a helmet that has been fitted to you personally.

The H.A.N.S. Device is special for each use or type of car. These different applications take into account seat geometry and neck size to fit the driver, seat and car to protect from injury.

Sports car racing seats, for example, are made differently from other race seats to work with a H.A.N.S. device.

What about first-time racers that work with a co-driver, what can they do to prepare their MINI?

There are products offered to custom fit seats. Seat inserts custom mold. You can have them custom-made or there is a two-part epoxy foam mix and fill that can be done on your own. This two-part foam fills open areas and molds to the body.

It is also common to use seat on sliders for leg length.

We use a rig that’s specifically for racing. It’s a seat rail system with locking pins. In Phoenix for example (where Tony rolled his MINI) all the safety equipment worked.

What changes did you make to the brake system in your MINIs?

Some people want to run big brakes, but I use Hawk performance brake pads with stock calipers and rotors. Hawk is a sponsor but I have to say I’ve used about every brand out there, since switching to Hawk, I’ve had great results with these pads.

With the Hawk pads I can race a weekend and still have plenty of pad left on the car.

Hawk Blue pad is great for the street and track days. I’ve used their HT10 and the more aggressive HT13 pad. It is tough on rotors but it’s what gets the job done on the track.

I’ve raced in a series where the MINI was weighted to approximately 3052 lbs. while racing with this pad and they performed flawlessly. Remember saving weight is important and the factory brakes are light and with the right pads they work well in race conditions.

Does your team test race equipment designed for MINIs?

We have tested some components for racing, since we started this effort and were the first to race the new MINI we had to develop our own racing systems for the track.

How does the MINI handle rough tracks, shock travel, and other suspension challenges?

We worked with KW to develop a suspension for racing the MINI. There was not a race-ready suspension when we started so we worked with them to create a package that enhances the handling characteristics of the MINI.

Keeping notes of your settings is the way to get consistent results. But also choosing a suspension that is made for the MINI. There are suspensions out there that I wouldn’t run. We designed our suspension in cooperation with our sponsors because some aftermarket stuff is designed for one brand and modified to fit another. You have to be careful when choosing a suspension to be sure its design is compatible with the MINI in a racing application.

What competitors do you face? Are there teams that have set out to beat the MINI on the track?

Race-prep quality makes the difference for our success with the MINI. We race factory teams that have more horsepower than we have. Bigger factory support teams and more time on the track with their developed cars. The TSX and RSX are strong competitors and Honda is back with a factory team. We also go up against 3 Series BMWs.

The Chevy Cobalt is a private racing team with factory support. Cobalt will be tough this year, as it seems they are out to make a name for the brand. Their driver has experience racing Corvettes so it seems they’ve turned it up a notch. Another new car that’s coming is the Mazda RX8, it’s fast.

One thing fans have to realize is that MINI is a new car company relative to the other car manufactures. They’ve only been building this car since 2001. This is only their fifth year and they’re small as car companies go.

So why choose the MINI for competition over other cars?

This is one solid car. I drive a Cooper S daily with no mods . When we were looking for a car the MINI stood out. This car has a strong platform and it handles well.

We have worked hard to continue the MINI legacy. We showed that we could beat faster factory teams.

I can’t wait to build the new (R56) car. With turbo and variable valve timing, the engine is more sophisticated for fine-tuning. I can’t wait to get one on the track.

You mentioned some exciting news about a sponsorship deal you’ve been working on, what are you looking forward to?

Our new sponsor on the #20 car is Unichip. They have developed a new Piggy Back System that plugs into the street car and is a Bluetooth controlled plug-and-play. Tuning on the fly!

It also offers street vs. track separate programs at the flip of the switch. There is no electronic footprint left behind. If you change exhaust, you can tune the car with this system that is programmer-friendly and not a flash-based system. It’s a true engine management system. This system can be used with any car. Currently being used in Porsches. It adapts well to the MINI. It is adaptable to the modifications many owners will make. We premiered the sponsorship at Daytona!
Here’s a quick list of Nuzzo Motorsports sponsors: Hoosier Tire, Unichip, Moton Suspension, Bosch, Hawk Performance Brakes, NorthAmericanMotoring.com, Red Line Oils.

After talking with Tony over a few days during Speed Weeks, it’s easy to see that he is totally committed to the MINI and is sold on its potential to win races in the Grand-Am Series. All of us at MotoringFile would like to give a big thanks to Tony Nuzzo and wish the entire team well this year.

To learn more about when you can see the races on Speedtv, head over to tvracer.com.