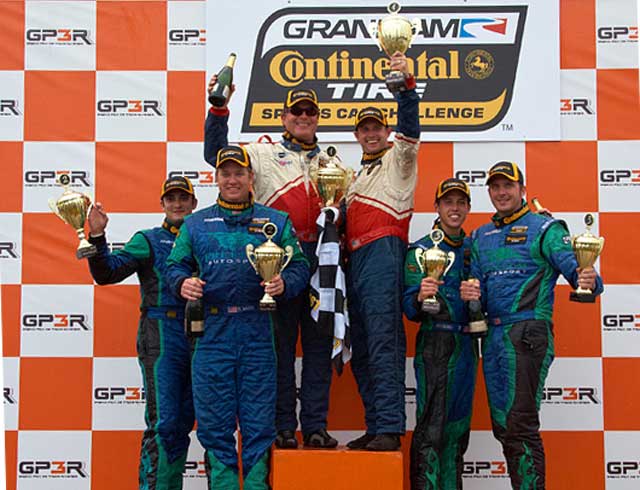 RSR Motorsports led much of the race at Trois-Rivieres in 2009, and the team knew that strategy and pit stops would be a key factor to leading the way once again. Last yearâ€™s race had few caution periods, so Smalley took advantage of an early-race caution to pit, handing over to Trinkler.

Trinkler held down a steady pace and pitted again with forty minutes remaining. He re-emerged in fifth place, with plenty of fuel and a fresh set of tires. It enabled him to work his way forward, eventually taking over first place. Trinkler held onto the spot until the checkered flag waved.

â€œThis was possible because of the momentum we built up with our win at New Jersey, knowing what direction we want this team to go, and taking care of every small detail,â€ says Trinkler. â€œRandall has given us the tools and the right people to make this happen.â€

Smalley was especially impressed with the handling of the MINI. â€œThe car was incredible,â€ he says. â€œIt stuck to the track like it was on rails. I donâ€™t think Iâ€™ve ever felt so comfortable in a race car. Our entire crew really deserves a pat on the back for getting these MINIs set up so well.â€

Sarah Cattaneo and VJ Mirzayan showed a lot of promise early in the weekend after qualifying ninth in the No. 197 RSR Motorsports MINI Cooper S. A punctured tire meant the car came into the pits under green, and later in the race, a spin resulting from contact was another setback. Nevertheless, Cattaneo and Mirzayan never gave up, soldiering on to finish ninth.

Cattaneo handled qualifying for the No. 197 MINI. â€œI had spent the morning practice getting used to the track again, and I got the time I needed to give us a good spot on the grid,â€ she says. â€œThe MINI performed great: it didnâ€™t have brake issues like other cars, and we had the speed we needed to do well.â€

â€œI think we had a top-five car,â€ agrees Mirzayan, â€œbut in racing you need luck as much as anything else. Weâ€™re looking forward to Miller, where we can put this round behind us.â€

RSR Motorsports will finish the GRAND-AM Continental Tire Sports Car Challenge season the weekend of September 10-11 at Miller Motorsports Park. The team has been on the pole there, and will be aiming for their third consecutive win.