Mark Pombo returned to the team this week after being out of the last three events. Pombo wouldn’t miss a beat, qualifying the #37 in ninth position and having an excellent run to start the race.  He would drive the longest stint out of any of the drivers and methodically worked his way toward the front.  When it came time for him the turn the car over to Ethan Low he was in fifth position and still showing good speed.

Low always drives on the edge.  He continually puts down amazing times lap after lap.  After taking over for Mark Pombo he found himself a little further back in the field. Low was looking to make up ground in a hurry as it got late into the race.  But driving on the edge was to much, as Low ended up in a tire wall with just under a half hour remaining.  Unfortunately with so little time left the team couldn’t get the car repaired and back into the race.  The #37 would show up in 20th place on the final leaderboard. 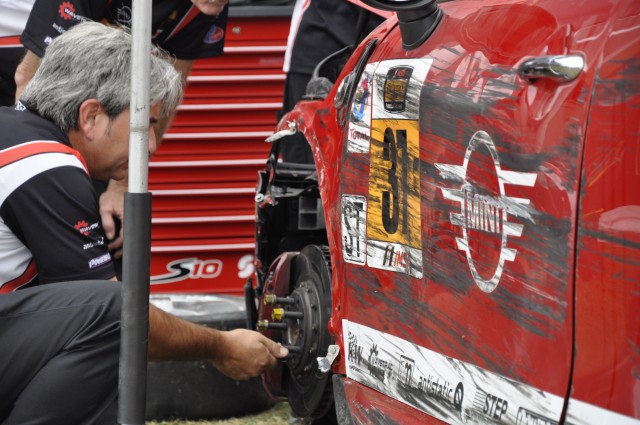 Ramin Abdolvahabi and Nate Norenberg drove the #52 MINI JCW this week. Abdolvahabi did the qualifying duties for the #52 and had a run good enough for 15th starting postion in the race.

Only a few minutes into the race the #52 experienced an issues that necessitated pitting. Abdolvahabi would have to rejoin the race at the back of the pack, leaving the #52 to play catch up the rest of the day.

Nate Norenberg made his second appearance for the MINI JCW Team and seems to be getting a handle on the MINI JCW. He drove a trouble free stint and quietly moved the car forward.  When the checkered flag waved the #52 finished with a strong 12th place effort.

If you’ve been following the MINI JCW Team for a while you’ll have noticed that the #73 usually runs well.  The combination of Derek Jones and Mat Pombo has been a hit, dating back to last season when they scored the teams first (and so far only) podium finish.

Jones turned in another stellar qualifying effort and the #73 would start the race in fifth position.  He stayed in the top five for most of the first half hour.  Soon after that he had a big off but avoided any contact.  He re-entered the field in 12th place and continued without issue.

Shortly after the halfway point a full course yellow came out, allowing the #73 to pit and make their driver change.  The pit stop was slower than they hoped and would put the #73 further back in the field.

Road America featured quite a few caution flags.  With so many of them Mat Pombo, now driving the #73, would have trouble moving up the field.  Many of the ST cars were waiting to hit a certain window before pitting. And when that window came it would be a fortunate event for the #73.

Much of the ST (the class in which the MINIs race in) field pitted shortly before the one hour to go mark. This moved the #73 up to third since they had already pitted earlier in the race. Pombo now found himself right where he wanted to be, at the front of the pack with under an hour to go. 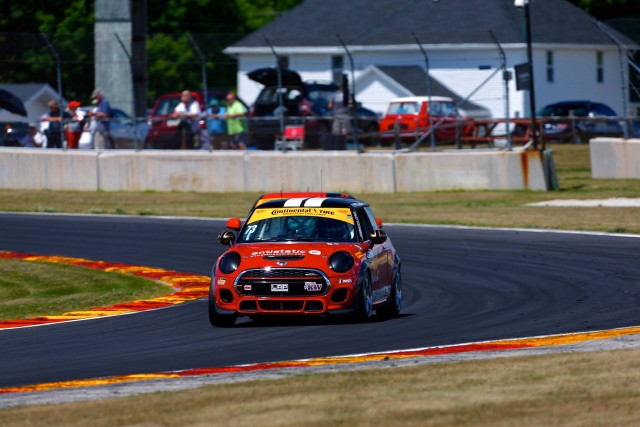 Pombo delighted us with some of his best racing of the season.  Putting down one impressive lap after another.  Moving from third, to second and finally taking the lead.  For the next 15 minutes he would show the world what John Cooper had in mind for a MINI race car.

He received extreme pressure from behind, even being bump drafted down the straights.  Pombo would drive his JCW deep into the corners, so much so that the back end of the car would slightly wobble as the weight of the car shifted forward.  Corner after corner he would fight hard to hold back as many as three cars at once in an effort to maintain the lead.

Eventually Spencer Pumpelly would pass the #73 but all was not lost.  Mat Pombo was still in good postion to bring the team a second podium.  He had a tight grip on second and was running well enough to keep the others behind him.

Around the track cars were pitting for fuel and questions were rising about who could make it to the end.  The #73 was the earliest of the MINIs to pit but should still be able to make it.  The last lap came around and Pombo was still running in second when there was a hiccup in the fuel supply.  The car responded by reducing power to the car and Pombo would have to finish the race at a slow pace. This allowed multiple cars to pass him in the last half of the white flag lap and he would bring the #73 home in seventh place.

The next race of the Continental Tire SportsCar Challenge takes place at Virginia International Raceway on August 20th.