The 2017 MINI Countryman is the most anticipated new MINI model since the launch of the new F56 hatch in 2014. And like that car we managed to get some early access with the new model the designers and engineers that brought it to life. In other words we’ve done everything but drive it. While that’s a pretty key component of reviewing a car we thought we’d bring you our initial observations and what we learned from the launch even. 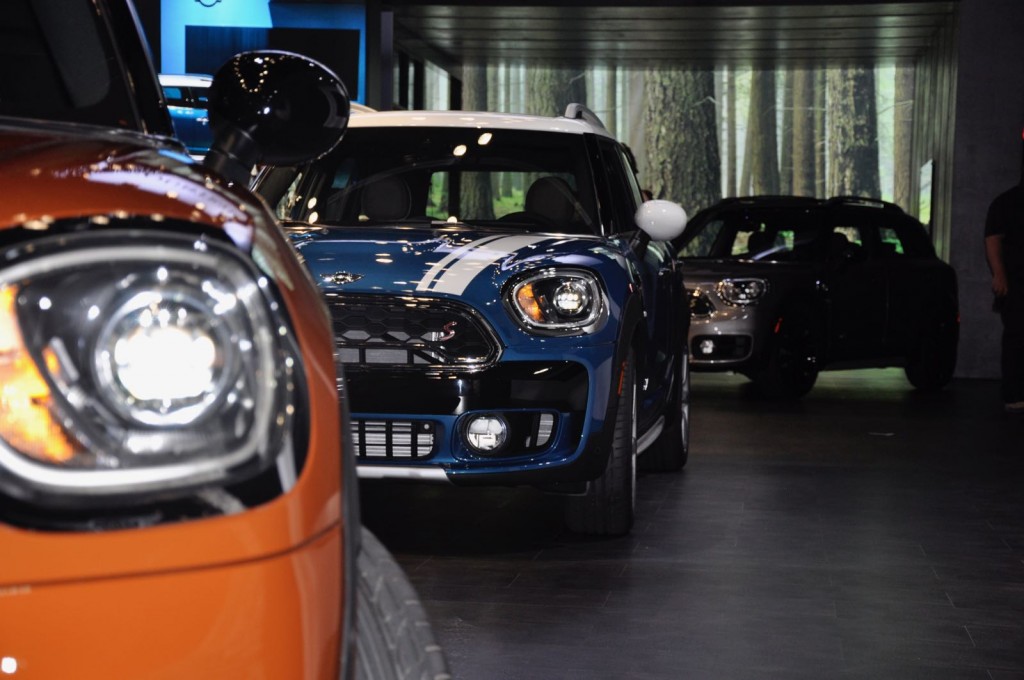 As much as this Countryman looks like a subtle evolution in photos, in real life it looks decidedly more aggressive and angular. The rear flanks in particular have a much more defined shape to them now with a squared-off fender line that hints at vintage rally cars. The result is a car that looks more aggressive and less bulbous then before. Some would say this is less MINI but the classic Mini design had plenty of sharp angles that helped to define it as very function first and utilitarian design. While the new F60’s shape is certainly driven by the wind tunnel as much as a designer’s pen, the look feels more functionally driven because of these new details. 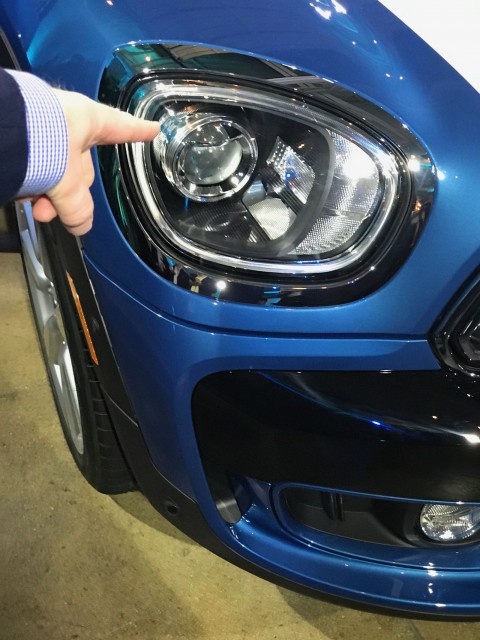 The front of the car is taller and again more aggressive. The lights have grown slightly and again are now more angular fitting with the rest of the car’s appearance. There are two lights available; the standard halogens and the optional black trimmed LEDs with turning lights (gone are the LEDs without turning lights). The folights are more centered than before and follow the standard BMW practice of higher more centered driving/fog lights on crossovers.

There are three “faces” of the new Countryman to choose from. Beyond the standard look there’s a new All4 off-road exterior package which changes the look of in rather dramatic fashion. With black bumper inserts and silver trim along the sills it’s a much more rugged look that has polarized MINI fans since its release late last month. Without the option the Countryman has a more subdued look that feels more inline with the rest of the range. It’s worth noting that in the US these black accents will come body-colored with black being a no-cost option. In our opinion the black looks suitably aggressive and gives the Countryman a rugged look that it had always lacked. It would probably be our choice if we were ordering one with our own money.

The other exterior look (that hasn’t been seen publicly yet) is the JCW exterior package. The design is less rugged looking and more aggressive, inline with the rest of the JCW range. The JCW pack options will change from market to market but the key exterior differences will consist of new front and rear bumpers, side sills and unique 18″ and 19″ wheels.

Yes 19″ wheels will be factory optional for the first time. And given the height of the belt-line they’re a pretty nice visual update.

Inside it’s more revolution than evolution with a dramatic increase in quality and a much more user-centered design. As expected MINI has taken the general design of the Clubman interior and evolved it to better suit the overlook and purpose of the more rugged Countryman. The material quality is about the same but the design is more upright and (as you’d expect) a bit taller. One of the more interesting options is the LED lighting that we first saw on the Clubman’s doors. It’s moved to the plastic on the dash and is now more worth the $400 asking the price.

The new iDrive system is nothing short of a revelation.MINI has added much more than just touch control with this update. It’s an entirely new system and an evolved design and interactions that make it all much more intuitive and faster. There’s no CarPlay yet but we expect that in about a years time. Look for more on the new navigation system in MF soon.

The seats are identical to the Clubman but the Countryman is endowed with a bit more rear legroom space – about an inch in our brief experience. The result is easier ingress and egress as well as just plain comfort. How does the interior seating compare with the previous Countryman? Miles better in every way. It’s now a true five seater with more width and depth in the back. Up front it’s is a similar story. At 6’2″ I always found the previous Countryman’s front seats to be more of a perch than a seat. The new seats are just that – actual seats with full thigh support.

The trunk/boot is another huge improvement with more depth and width. It’s basically identical in size to the Clubman with more height thanks to the taller structure. The standard (in the US) powered hatch is a welcome additional with the increase size. Another welcome addition is the new “Picnic Bench“. In talking with MINI designers the idea of the picnic bench stemmed from a similar idea first shown on the MINI Traveler concept in 2007. Apparently MINI designers had tried to get it made and included in a number of cars before finally getting it approved for the 2017 Countryman. Their enthusiasm is well deserved based on our short experience with it. The bench makes the hatch more versatile for everything from loading dogs, tailgating, changing muddy boots or getting in and our of skis. It’s one of those inventions that makes you immediately ask why no one had thought of it before. The bench attaching to the underside of the load floor with magnets and doesn’t really impact space with or without the optional spare tire. 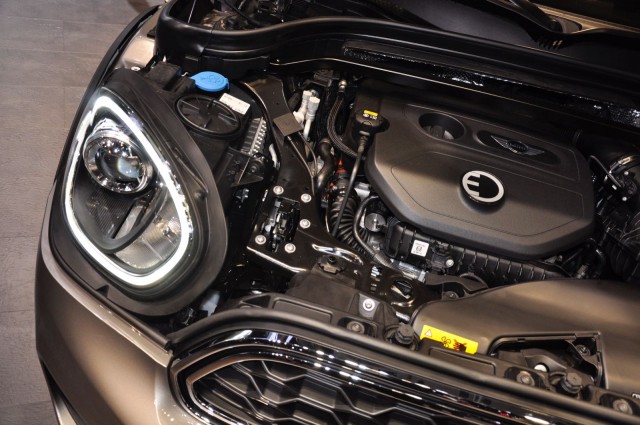 Beneath the surface the 2017 F60 Countryman looks to be a more substantially engineered car. We’ve shown you how much more safety equipment there is previously. But seeing the beefy cross-members under the hood and sneaking glimpses of the suspension seems to show a MINI that has greatly improved thanks to sharing a platform with BMW.

We’ll be driving the new Countrymanin a few months and only then will we be able to bring you our full opinions on it. But after spending some quality time with MINI’s new crossover we’re fairly optimistic that it will be exactly what most of the buying public and plenty of hardcore MINI fans have been waiting for.