MINI USA sales grew by 225 units in a March where US light vehicle deliveries slid by 1.7% overall. This month’s winners were the 2-door hardtop, the convertible and the Countryman. This months losers were the 4-door hardtop and the Clubman. And one lonely Paceman found a home as well.

Looking at Matt’s MINI Index, things look OK as well. Even though the index grew by 6.9% overall, Subaru was the only brand that exceeded that mark. For what it’s worth, Subaru has the highest brand loyalty of any brand in the US! MINI was only 0.2% behind the second place finisher Mazda, that racked up gains of 4.9%. Once again, the US market showed even more of a shift to Light Trucks, SUVs and CUVs. These types of vehicles totaled over 60% of all sales in the first half of the month, the highest penetration ever recorded. 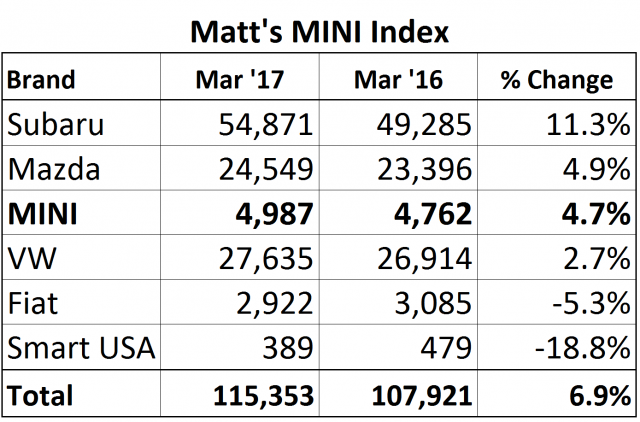 There is an ancient Chinese saying that goes “may you be cursed to live in interesting times” and these are very interesting times for MINI. Their agency threw in the towel just days before their performance review. And then there is this story in Automotive News where BMW Group CEO Harald Krueger is quoted as saying “We would like to grow in the top segments where you earn more money…. We are not pushing in the UKL segments.” For BMW that means that the 2-series and the X1 aren’t going to be pushed hard, but for MINI? We don’t quite know what to make of this quote or it’s implications. Interesting times indeed. But don’t look to the monthly sales announcement from BMW for any guidance. As has become the norm, it’s just a recitation of numbers with no editorial content or brand guidance.

Global MINI Sales Down 6.8% for November