It’s getting harder and harder to find silver linings in the dark clouds that are the monthly sales numbers for MINI USA. Yes, July was a bad month for the whole industry (light vehicle sales down 6.9% for the entire industry.) Yes, MINI USA didn’t do a whole lot worse than the industry as a whole (down 7.9% compared to July 2016). And yes, there was one less sales day this year compared to last (that alone should account for a 3%-4% decrease in sales.)

For the industry as a whole, sales are declining while both incentives and inventory are up. Even the most optimistic of forecasters are starting to say that the multi-year growth in US light-vehicle sales is really and truly over. The only savings grace for some is that even though unit numbers are dropping, average transaction prices are rising (at $34,721 for July) year over year. As are margins as buyers continue to prefer higher margin trucks and SUVs. (It is interesting to note that while buyers perceive more value in these classes of vehicles, they are essentially paying more money for less vehicle!) 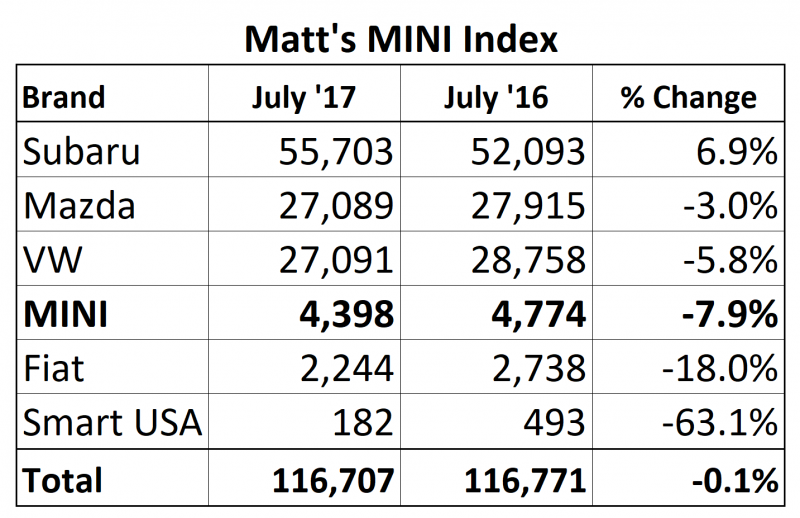 Matt’s MINI Index was only down 0.1% due to the growth of Subaru, but all the rest of the brands were down from a little to a lot (I guess people are finally realizing that Smart cars aren’t really so smart!) Dropping the Subaru numbers, the rest of the index is down 5.7% making MINI a bit worse than the average of the rest. 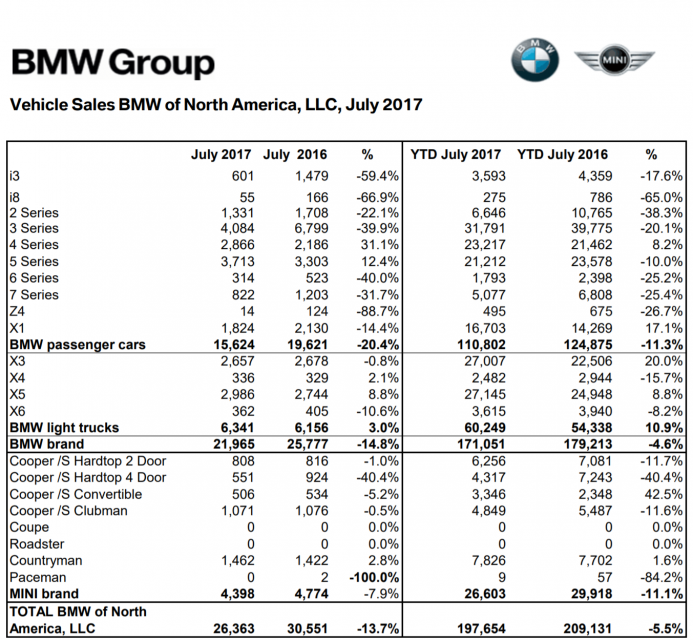 But looking at the breakdown by model (I’m including the BMW numbers here as well to show how the X1 is doing), there is little good news. Every model is down save the Countryman, that is up only 2.8%, or just 40 units. 4-door hardtop sales are cratering, down 40%! This wouldn’t be so bad if the sales had moved to the Clubman and Countryman, but sadly, they didn’t. And during a time when SUVs and CUVs are the darlings of the industry, the Clubman is basically flat (down 5 units).