Round 8 of the Continental Tire SportsCar Challenge (CTSC) took place at Virginia International Raceway. The Biscuitville Grand Prix was a two hour event that started with some promise but ended with the MINI JCW Team’s championship hopes taking a major hit. 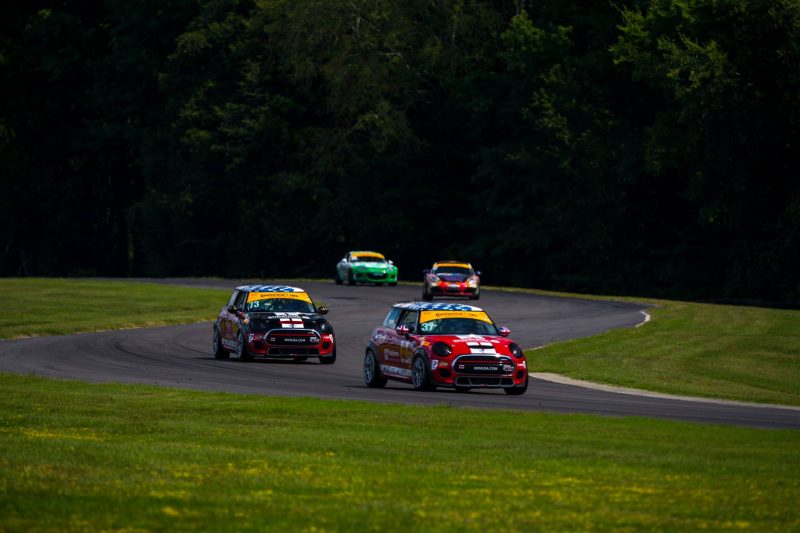 After the ludicrous call IMSA made to end the race early at Road America the #73 driving duo of Derek Jones and Mat Pombo knew they had their work cut out for them if they wanted to win the driver’s championship. With only three races left and 26 points to make up they were going to need strong finishes (and possibly some bad ones by their opponents) to get to the top of the standings.

Jones had a solid opening stint. Quickly moving up the ranks as he had captured 5 positions in the first 15 minutes. He had caught up to the #37 and the MINI tandem continued to move forward. Jones had worked himself all the way up to 5th by the time he made his pit stop.

Mat Pombo entered the #73 and was in good position to make a run at the podium. Unfortunately, they were back under green for less than 5 minutes when disaster hit. Pombo and the 25 Mazda make hard contact, breaking the suspension on the #73 and sending Pombo hard into a tire barrier. In the end Pombo was OK, but the team’s championship hopes are now on life support. The #73 finished in 16th and scored a DNF.

#37’s Up and Down Day Ends Where It Started

Despite suffering through limp mode issues in qualifying Mike Lamarra was able to put in a great lap that lead to a 6th place starting position.

Lamarra initially fell back to 10th at the start of the race but had worked his way back up to 6th 15 minutes into the event. Lamarra continued to put in strong laps for the remainder of his stint. The #37 would be in 4th place by the time Lamarra came into the pit.

James Vance would take over the #37 for the closing stint, but as the race went to green he had an off putting him back in 12th position. Vance explained it as so:

The biggest issue in the race was right at the restart, and was probably the first mistake I made all year. I don’t think I had warmed up my tires completely when we went green. We heard we were going green on the back straight and I started warming up the tires quick. I had the car in third gear on the roller coaster and the car was just screaming at me. I shifted to fourth gear halfway through the last corner when the turbo spooled up and gave me an unbelievable amount of torque steer, and just went off into the grass ‘exploring’. I have no one to blame but myself.

With about 20 minutes remaining the race would return to green and Vance had a lot of work to do to make up for his mistake. Vance didn’t waste any time, gaining 7 positions in under 6 minutes, making quick work of his competitors. From that point on he had his work cut out trying to hold off the cars he’d just passed. The #81 BMW and Vance had a fierce battle the lasted for quite a while before the #81 got the better of Vance with 5 minutes remaining. But Vance was able to hold of the others and bring the #37 home in a respectable 6th place.

The #52’s day didn’t go so well. Tyler Stone would start the race in 14th place after a disappointing qualifying session. After about 50 minutes of racing a Porsche made contact with Stone, whom had moved up to 12th, and effectively ended the day for the #52. The #52 would not finish the race and be shown as 17th in the final standings.

Next up on the calendar is the Mazda Raceway Laguna Seca 240 on Saturday September 23rd. This will be the second four hour race of the season. Hopefully the team can repeat the result they had at the last four hour event.