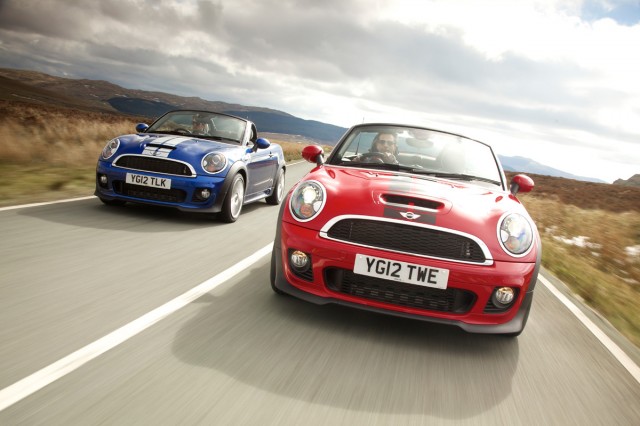 Official News from MINI: The MINI Cooper S Roadster has scooped the title of best open-top at the prestigious What Car? Car of the Year Awards 2013. Chas Hallett, editor of What Car? said: “MINIs are all about fun and the Roadster delivers it in spades – in fact we think it’s the most fun MINI yet. Drop the roof and the MINI Roadster feels like a modern-day version of classic British sports cars such as the MGB and Lotus Elan – only better.”

The award comes hot on the heels of MINI’s record breaking sales year in the UK, with the brand recording 51,234 vehicle registrations in 2012, the highest since the brand’s launch in 2001. The MINI Roadster was launched in the UK in April 2012 and the two seat soft-top has exceeded initial sales expectations. Built at MINI Plant Oxford, the MINI Roadster reincarnates the spirit of classic British roadsters by combining a high quality interior with class leading engines, delivering MINI’s hallmark agility and ‘go-kart’ handling.