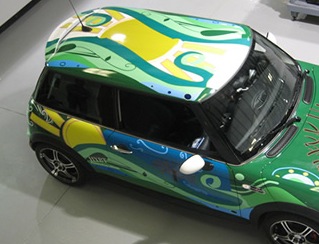 >The Mini Cooper is already a Hollywood star and has been featured in Forbes and the Wall Street Journal. It is powered with a pure electric drive system using state of the art lithium-ion battery units and a highly advanced BMS (battery management system). The car was originally developed for diplomatic service and has been welcomed by the Hollywood eco set as the latest and greatest in green driving.

This is the same car that has been put into active service at NASA and was fairly well trashed by singer James Blunt.

>Powered by a 220v or 110v plug in system, the Mini can reach speeds of well over 80mph with a range of over 120 miles on a 5 hour rapid charge. The car was developed for inter-urban driving and a long range city car is in production, thus making it a leader both in technology and market penetration.

You can read the full press release below.