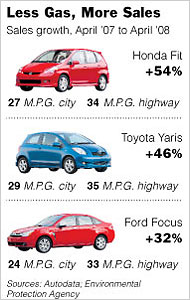 A great article via the Paper of record. It would seem that those SUV drivers are really getting tired of having to swipe their credit cards twice to fill up their tanks.

>In what industry analysts are calling a first, about one in five vehicles sold in the United States was a compact or subcompact car during April, based on monthly sales data released Thursday. Almost a decade ago, when sport utility vehicles were at their peak of popularity, only one in every eight vehicles sold was a small car.

>Sales of Toyotaâ€™s subcompact Yaris increased 46 percent, and Hondaâ€™s tiny Fit had a record month. Fordâ€™s compact Focus model jumped 32 percent in April from a year earlier. All those models are rated at more than 30 miles per gallon for highway driving.

Not to mention MINIUSA Sales up almost 40% for April.

>Full-size pickup sales have fallen more than 15 percent this year, with Fordâ€™s industry-leading F-Series pickup dropping 27 percent in April alone. Sales of pickups, though, are expected to strengthen with the economy, because of their use as commercial vehicles.

>The rise in sales of more fuel-efficient vehicles occurred during one of the industryâ€™s worst months in more than a decade. For the month, G.M. sales dropped 23 percent and Ford slid 19 percent, while Toyota fell by 5 percent. The figures were adjusted for the fact that this April had two more selling days than a year ago.

It’s a great article. Made me smile to know that I don’t have to worry about ‘trading down’ to a small car, since I already have one thankyouverymuch.

The MINI E Touches Down In LA

You Build it: Most Expensive US Spec MINI