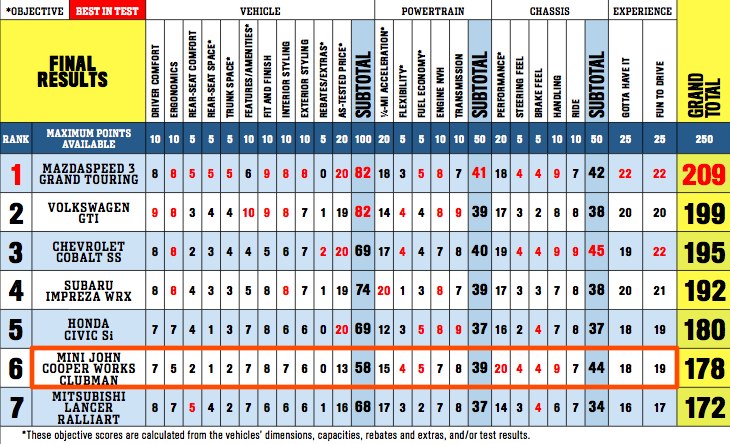 Car and Driver recently did another one of their comparisons. This time they put 7 cars together to try to come up with a good dollar-to-performance figure. The MINI of choice for this particular shoot-out was one of the most expensive MINIs you can buy, the JCW Clubman.

>The seats (cloth, at this price) lack support, and the view out the back is partly obscured by the French doors. The rear area seats two, and only two, in relative comfort, but not before both must insert themselves awkwardly through the half-door on the passenger side. And the radio, despite our increasing familiarity with it, continues to confound us, in both function and the odd logic behind the placement of its knobs. Unlike the charming exterior styling, the Miniâ€™s interior looks as if it is trying too hard to be different.

All stuff we know already. Even with all of this, they loved the car as you would expect. But look at the chart. Performance, steering, flexibility and fuel economy it scored higher than the rest. But it was seriously dinged for it’s high price (as tested) and, oddly enough, because there aren’t any rebates or extras.

Not a bad review of the Clubman, but they should have picked an S instead.