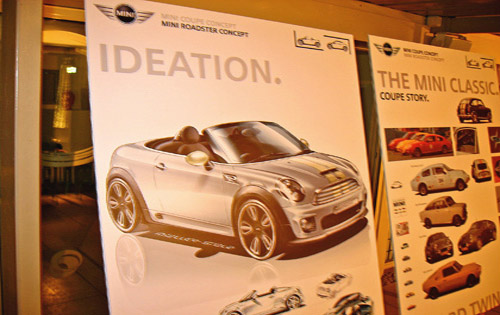 However the bad news is that the Crossover originally intended to debut at Frankfurt will be pushed back to a debut in early 2010. Here’s a quote from the Insideline article:

>”The Crossover launch has been pushed back,” says a BMW Mini spokesperson, “as we wish to first explore differentiation within future Mini smaller models and get feedback.”

We wouldn’t read too much into this. MINI’s staking a lot on this Crossover and they expect it to provide solid sales and revenue for quite a few years to come. However the timing of the launch is curious. With production ramping up in December of this year, our guess would be that MINI would debut the car at the Detroit Motorshow in early January. However a debut at the much larger Chicago show or even Geneva could still be in the cards.

Also mentioned in the article is the potential for MINI to work with another manufacturer to help create it’s new models of ultra small cars. It’s hard to speculate because things are still in flux but it would seem that there is still an outside chance at MINI producing something smaller than the current R56 hatchback.