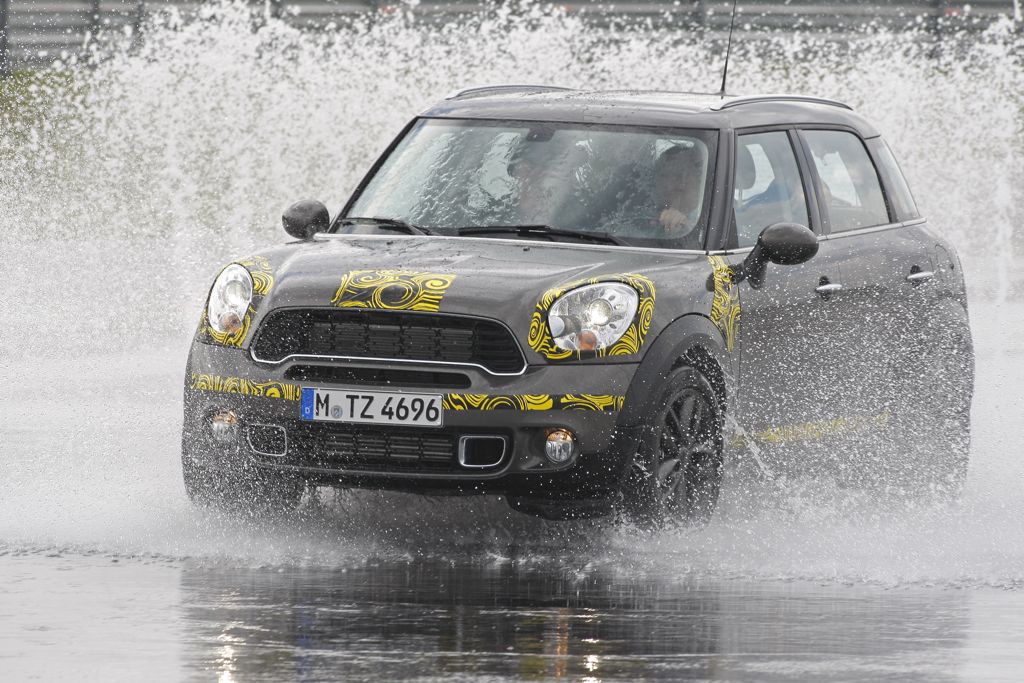 It’s the dawn of a perfect day in Vienna. I’m just hours away from driving the most talked about MINiI since the introduction of the R56. The Countryman is the first four door vehicle to have the MINI badge and the biggest MINI of all time. And with that comes an enormous debate; is this truly a MINI? In four hours I’ll find out.

Stay tuned to MF for our initial impressions followed by our full review and over 80 photos of the test. Until then, here’s MINI’s full official release (with tons of great technical information) that coincides with the preview drive.

One final note: the Countryman (not men btw) I’ll be testing will be inexplicably camouflaged. Is it because they had a ton of that swirly yellow tape lying around? We have no idea.

Official Release: With the addition of the MINI Countryman as the fourth variant in its model family, MINI is taking the inimitable MINI feeling into a new dimension. The MINI Countryman crossover bridges the gap between the classic MINI concept and a contemporary Sports Activity Vehicle. Its broader range of abilities in both urban use and beyond paves the way for larger and evolving target groups with a greater need for space and flexibility to experience the driving fun that comes with a MINI. The brandâ€™s first model to feature four doors and a wide-opening tailgate, the Countryman offers more space â€“ which can be used in a wide variety of ways â€“ to go with its raised seating position and optimised ride comfort. Plus, the â€œgo-kartâ€ feeling for which MINI is a byword has been preserved and takes on a new dimension with the optional MINI ALL4 all-wheel-drive system. The MINI Countryman expresses the defining virtues of the brand in terms of design, premium quality, handling, efficiency and the scope for customisation â€“ and does so in an absorbingly individual way.

The MINI Countryman manifests an effective and assured development of the brandâ€™s design language. The new model combines larger body dimensions, increased ground clearance and four side doors with the hallmark features of MINI design. Short overhangs, a high window line, a commanding over-the-wheel stance and the wrap-around look of the windows â€“ extending all the way around the vehicle â€“ create typical MINI proportions. The Countryman provides a fresh interpretation of classic MINI features, such as the roof line, hexagonal radiator grille, large headlights set into the bonnet, side indicator surrounds, capacious wheel arches and vertical rear light clusters.

Using the MINI design language as a starting point, the stand-out features of the MINI Countryman are showcased in fitting style. The upright front end exudes presence and helps to optimise pedestrian protection. The increase in interior space is emphasised by large glass surfaces, the four-door layout by the distinctive contours of the roof. The extra-wide border around the lower part of the body and powerfully bolstered wheel arches are a nod to the robustness of the vehicle and its all-wheel drive. The precise transposition of the MINI style into a new vehicle segment ensures that the MINI Countryman comes across as a totally new type of vehicle and yet is instantly recognisable as a MINI.

The interior of the MINI Countryman is very much in keeping with the brandâ€™s familiar style but boasts a selection of new design and functional elements. The slightly raised seating position allows easy entry, optimises the driverâ€™s view over the road and reinforces the powerful character of the new model. The Centre Speedo and air vents are bordered by coloured rings. The unique MINI Centre Rail, meanwhile, runs lengthwise through the middle of the interior in place of a conventional centre console and opens up new ways of integrating storage boxes, cup holders, external audio devices, mobile phones and other comfort-enhancing elements just as you want them. Clip-in fixtures have a flexible range of positioning that allows the storage area to be divided up as desired and items to be kept close at hand at all times. Added to which, the Centre Rail creates an unconventional visual and functional connection between the front and rear compartments.

The MINI Countryman comes as standard with four seats, while a three-seat bench is available as a no-cost option. Its interior enhances comfort over long journeys with generous legroom, headroom and shoulder room. The rear seats can be moved forwards and backwards individually or in a 60 : 40 split (three-seat bench), the angle of the backrests can be adjusted and the backrests can be folded down either individually or in a 40 : 20 : 40 split (three-seat bench), all of which allows luggage capacity to be increased from 350 litres to a maximum 1,170 litres (12.4 to 41.3 cu ft).

The MINI Countryman will be available with three petrol and two diesel engines at launch. All the drive units are sourced from a new generation of engines optimised using the BMW Groupâ€™s development expertise. And they all meet the EU5 and ULEV II exhaust emission standards. Output ranges from 66 kW/90 hp in the MINI One D Countryman to 135 kW/184 hp in the MINI Cooper S Countryman. With its twin-scroll turbocharger and direct injection now complemented by fully variable valve management, the 1.6-litre four-cylinder petrol engine in the range-topping model offers by far the best balance between output and fuel consumption in its displacement class. Furthermore, the MINIMALISM concept sees wide-ranging technology designed to reduce fuel consumption and emissions â€“ such as Brake Energy Regeneration, the Auto Start/Stop function, Shift Point Display and the need-based operation of ancillary components â€“ fitted as standard and in model-specific combinations. For the petrol engine variants a six-speed automatic transmission with Steptronic is available as an alternative to the standard six-speed manual.

The MINI Cooper S Countryman and MINI Cooper D Countryman can be ordered as an option with MINI ALL4 permanent all-wheel drive. Here, an electromagnetic centre differential positioned directly on the final drive varies the distribution of power seamlessly between the front and rear axles. In normal driving conditions up to 50 per cent of the drive is sent to the rear wheels, in extreme situations as much as 100 per cent. The result is a new, traction-led expression of the agile handling for which MINI is famed. This ability is underpinned by sophisticated new suspension technology, which includes a front axle with MacPherson spring struts and forged track control arms, multi-link rear suspension and the electromechanical power steering system EPS. The MINI Countryman comes as standard with the Dynamic Stability Control (DSC) system. Available as an option are Dynamic Traction Control (DTC, standard on the MINI Cooper S Countryman â€“ both with front-wheel drive and ALL4 all-wheel drive â€“ and MINI Cooper D Countryman with ALL4) and an electronic locking function for the front axle differential.

A crash-optimised body structure with precisely defined load paths and deformation zones ensures exceptional passive safety. Standard safety features include front and side airbags, plus side curtain airbags for the front and rear seats, three-point inertia-reel seat belts on all seats, belt tensioners and belt force limiters at the front and ISOFIX child seat attachments in the rear. A Tyre Defect Indicator also comes as standard, while runflat tyres (standard on the MINI Cooper S Countryman with ALL4) are available as an option.

New model-specific equipment features have been added to the usual extensive selection of exterior and interior customisation options available for the MINI. A newly configured range of interior colours, trim elements and upholstery materials allows for particularly harmonious combinations. Air conditioning, the MINI Centre Rail and an audio system with CD player are all fitted as standard, while the model-specific array of optional equipment items and accessories available for the MINI Countryman includes high-quality audio and navigation systems as well as mobile phone interfaces with full integration capability for the Apple iPhone or other smartphones. MINI Connected, meanwhile, delivers a unique form of in-car entertainment with the addition of web radio and Mission Control functions, among others. Customers can also specify a large panoramic sunroof, Adaptive Headlights with xenon light, a heated windscreen, a trailer coupling, 16- to 19-inch light-alloy wheels, sports suspension (with the vehicle height lowered by 10 mm / almost 0.4″) and John Cooper Works performance components.