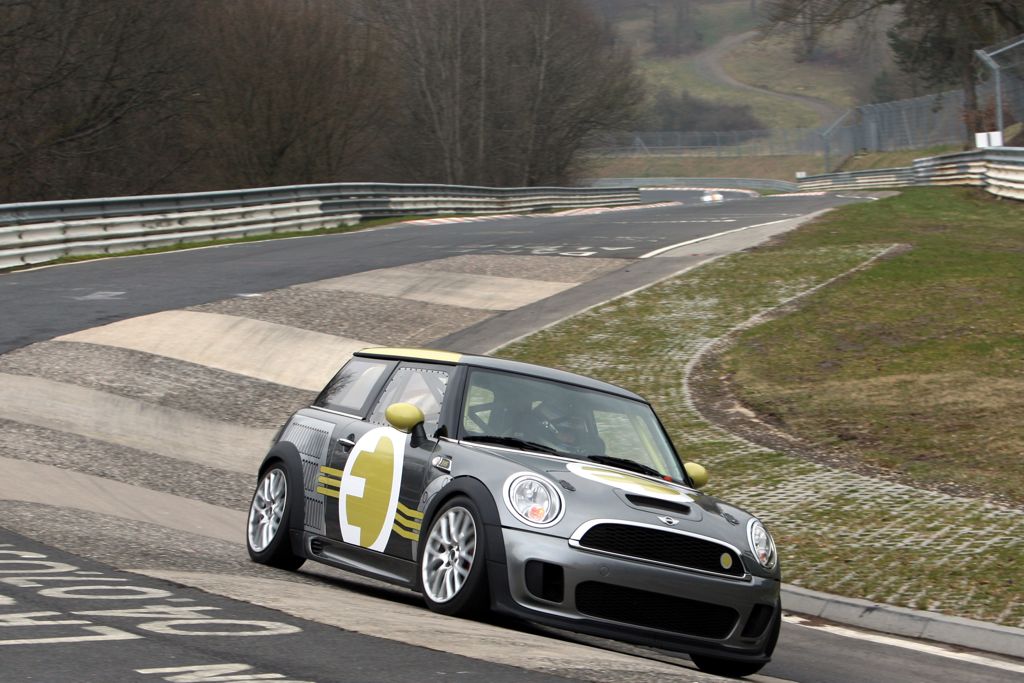 Official Release: MINI is planning to have heaps of fun at the 2010 Goodwood Festival of Speed from July 1st to 4th. Apart from displaying the full range of the current MINI models, the quintessentially British MINI brand will mix old and new as befits a 51 year old hell raiser. Goodwood will be the venue where MINIâ€™s glorious past meets the brandâ€™s exciting future.
MINI E Race to set electrifying pace

Monte Carlo Rallying legend, and one of the original â€˜Flying Finnsâ€™, Rauno Aaltonen will drive the MINI E Race up the hill at Goodwood.

The Festival will be the first in the UK to host the appearance of the MINI E Race, a modified race-equipped version of the emissions-free MINI currently undergoing road trials in the UK, USA and Germany.

The MINI E Race made its public debut at the Nurburgring in May when it covered several laps of the challenging 20.8 km Nordschleife driven by Thomas JÃ¤ger, 2006 MINI Challenge Champion. Jaeger managed a lap in 9 minutes 51.4 seconds and achieved a top speed of 117mph on the sinuous Eifel tarmac.

Extensive preparations were made before the car could undertake tests under racing conditions. The MINI E Race was fitted with a special lightweight body and a roll cage in order to ensure optimum performance and safety. Other components, such as the suspension, brakes and tyres, also follow race specification. Other than that, however, the car relies almost exclusively on the standard technical make-up of the MINI E. For example, it shares the same 150 kW/204 hp electric motor, supplied with energy from 5,088 lithium-ion battery cells. The power from the emission-free motor is channelled to the front wheels via a single-stage helical gearbox with a lengthened gear ratio.

Explaining why MINI had decided to build a Race version of MINI E Peter Krams, Head of the project said â€œThe length and profile of the Nordschleife place extreme demands on the technology of our electric car. But the MINI E Race met this considerable challenge with great authority. The aim of this unique undertaking was to provide an impressive showcase of the great potential of the MINI E and its environment-friendly drive concept.â€

The driver was clearly impressed too. â€œIâ€™ve driven this circuit many times, but never in such an extraordinary car,â€ said JÃ¤ger. â€œThe power of the electric motor has an incredible effect, as you can access its full reserves of torque at all times. Another element of this fascinating experience is the lack of noise from the drivetrain. All in all, that was certainly the cleanest and quietest race lap Iâ€™ve ever driven.â€

The MINI E Race demonstrates that MINI is leaving no stone unturned to prove the MINI E under all conditions. The public trials are approaching halfway and are proving highly successful. They are also helping to inform the BMW Group about the use of electric vehicles in real world conditions and contributing to the mass of planning and knowledge that is accumulating in BMWâ€™s Project i. The company has announced its decision to start production of a Megacity vehicle in 2013.
Set up like a race track to celebrate MINIâ€™s glorious racing heritage, Rauno Aaltonen will also be on the MINI stand for interviews and to meet fans over the three days.

Visitors will be able to take a closer look at the current range of MINI models including examples of the Hatch, Convertible and Clubman. Making its debut at a UK motoring event will be the new MINI Countryman that goes on sale at MINI dealers on September 18th 2010. The Countryman opens up a new era in the MINI story. It is the largest MINI model ever made and it is also the first to offer four doors and the option of four wheel drive in the ALL4 models.

The MINI Countryman range will form the fourth pillar of the MINI brand and it seeks to offer a solution to MINI owners who love the brand but feel forced to move to another make when they need more space in their car. The MINI Countryman will be available in five models, two of which will offer ALL4, MINIâ€™s new four wheel drive option.

The Countryman retains a familiar MINI appearance, albeit distinctly different to any that have gone before. It is 398 mm longer than a MINI Hatch, 106 mm wider and 172mm higher. With the seats up it offers 190 litres more luggage capacity than a MINI Hatch, with a total of 350 litres. With the rear seats folded flat, capacity increases to 1,170 litres. This large load space is accessed through a wide-opening tailgate. For the first time ever a MINI has four wide-opening doors, passenger capacity for five adults and a flexible, activity-orientated interior packed with innovations. All UK models will be built as five seat cars, although customers can specify the four seat option at no extra cost.

Featuring that typical â€˜wheel at each cornerâ€™ stance with short overhangs, the Countryman not only has larger dimensions than its cousins but also a higher ride height. This provides the commanding driving position preferred by many drivers as well as the ground clearance for soft off-road driving. Its ground clearance is 10mm higher than any other MINI model.

Many design characteristics are familiar such as the high window line and window graphics circumnavigating the glasshouse while others are new interpretations of iconic features. For example, the roofline with roof rails, the reinterpretation of the hexagonal radiator grille and the prominent headlight units integrated into the bonnet.

The Countryman range will include three petrol and two diesel models, as well as two ALL4 all- wheel drive models â€“ the Cooper D ALL4 and Cooper S ALL4. The petrol engines are equipped with the new 1.6 litre power plants already announced for the Hatch, Convertible and Clubman models and introduced in March 2010. The new diesel-powered units combine excellent performance with parsimonious fuel consumption and extremely low emissions, both emitting well below 120g/km.

Two models in the new Countryman range will offer four wheel drive, for the very first time in MINIâ€™s 51 year history. The MINI Cooper D and Cooper S ALL4 models will be available as models in their own right from day one. A MINI Cooper ALL4 will follow in 2011.

Four-wheel drive is not needed for much of normal driving and it does consume more energy to drive all four wheels. MINI has a typically smart answer for this conundrum: the Countryman ALL4 is a front wheel drive car in most normal circumstances, but when an electro-mechanical clutch in the rear axle detects any sign of wheel slip it engages drive to the rear wheels to improve traction. To enable this imperceptible change to the driven wheels a propeller shaft from the front axle is driven constantly and is ready to direct drive forces from the front axle to the rear. The amount of power fed to the rear wheels is infinitely variable between one per cent and 100, depending upon the slip encountered.

Rauno Aaltonen will also drive a classic Mini Cooper S on the Goodwood Forest Rally Stage. Aaltonen, along with Paddy Hopkirk and Timo Makinen, is part of the legend that saw the tiny car defeat all comers in the top echelons of rallying during the 1960s.

Aaltonen, known as the â€˜Rally Professorâ€™, invented the idea of left foot braking to balance the car as it entered corners. He enjoyed a long professional driving career from 1956 to the late 1970s and enjoyed a particularly purple patch when driving for the works Mini team winning the 1965 European Rally Championship in 1965 and the blue riband Monte Carlo Rally in 1967. He won countless other events too, including Britainâ€™s RAC rally and the Gallaher 500 in Australia (now the famous â€˜Great Raceâ€™ â€“ the Bathhurst 500), also in a Mini Cooper S.
This legend of the world of rallying will be driving a privately-owned 1964 Monte Carlo car on the challenging Goodwood Forest Rally Stage on both the Saturday and Sunday of the Festival. One or two lucky people will experience the passenger seat to see at first hand the Flying Finn deliver a masterclass of MINI action.
Aaltonen has for many years been chief instructor for BMWâ€™s driver training programme that operates winter and high performance driver training for customers in Austria, Germany, Finland and elsewhere around the globe.