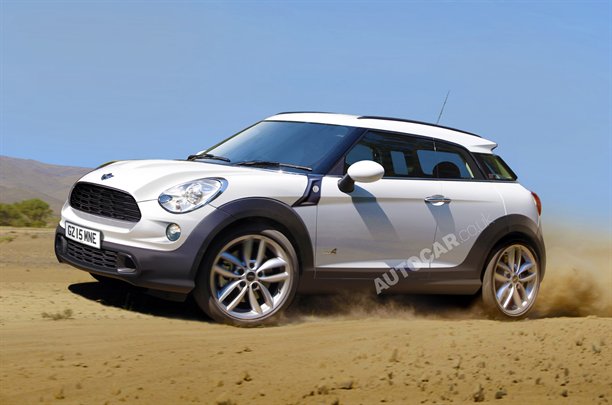 UK auto magazine Autocar is reporting that MINI is very seriously considering several variants on the MINI Countryman. Old news to MotoringFile readers but there are a few interesting tidbits. Most notably that an upcoming Moke (aka Beachcomber) variant would include a pair of rear-hinged “suicide” doors similar to the Honda Element. While the Moke would likely follow the Beachcomber’s higher stance and off road persona, real that back in for a road car and what have you got? Autocar seems to believe you’ve got the next Clubman.

Company sources say two versions of the Beachcomber are on the drawing board at the Mini design studios in Munich.

One is close to the concept and known internally as the Moke. The other is a shorter, three-door version dubbed the Canyon CoupÃ©. The two cars are being considered alongside the sporting Countryman coupÃ©, revealed by Autocar on 1 September. The starting point for the new Moke is a pillarless version of the new Countryman platform, which is also intended to underpin the next-generation Mini Clubman.

The pillarless design will enable the fitting of rear-hinged rear doors on both sides of the car, addressing criticisms (from right-hand drive countries such as the UK and Japan) of the current single-rear-doored Clubman.

Although the raised sill on the Beachcomber concept was, apparently, sufficient to meet most side impact regulations, the production Moke proposal has four proper doors, with the rear doors rear-hinged.

Is it fact or rumor? We’ll loop you in as we learn more. What do you think? Is the sky falling if the Clubman departs from its current hatch foundation? How do you current Clubman owners feel about two club doors? Sound off in the comments.

New 2008 US Mileage Numbers are Official