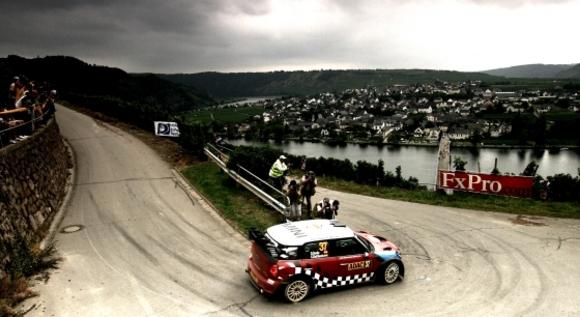 News courtesy of MINI Motorsport: At the renowned “Panzerplatte” Dani Sordo made a big step forward in his MINI WRC, improving to third overall. Kris Meeke has also had a positive morning in Germany…

Special Stage 10: “Arena Panzerplatte” – This stage is infamous and feared among the WRC drivers. Countless junctions and the mighty “Hinkelsteins” that line both sides of the road pose a big challenge to the drivers and require a lot of courage and talent. Dani and his co-driver Carlo del Barrio master the challenge without any major problems, as do Kris and Paul Nagle. The no. 37 MINI John Cooper Works WRC clocks a time of 20:04.4 minutes. As Ford’s Mikko Hirvonen loses a lot of time after a puncture, Dani moves up to third overall. This marks the first time a MINI drivers has been ranked among the top-3 this year! Kris is 11 seconds slower than his team-mate and remains fifth overall. However, the gap to fourth-placed Hirvonen is just 2.4 seconds. The cars now go into service, before this morning’s four stages will be completed again.

Special Stage 9: At first it looks as though Kris could be eyeing the third-fastest time on SS9. But then he drops some valuable seconds in the final section due to a puncture, meaning he has to make do with fifth after 15.23 kilometres. Dani is 2.2 seconds quicker and claims fourth on this stage. As Petter Solberg also loses time due to a puncture, Kris regains fifth overall, while Dani defends fourth. Now it’s time for the first run on the “Panzerplatte”. The MINI John Cooper Works WRC and all the other cars had better steer clear of the dangerous “Hinkelsteins” there!

Special Stage 7: The second day of ADAC Rally Germany kicks off with the 11.37-kilometre Hermeskeil/Gusenburg 1 stage. Following the strong Friday results, Dani and Kris roll to the start as fourth and fifth. Dani experiences a trouble-free opener to the day, setting the sixth-fastest time in 6:16.6 minutes. After promising split times Kris loses ground in the final section of the stage. “I made a mistake on the handbrake at a junction, completely my fault,” he comments. He comes tenth, losing P5 in the overall classification to Petter Solberg.

Worldwide MINI Sales up 34% for February