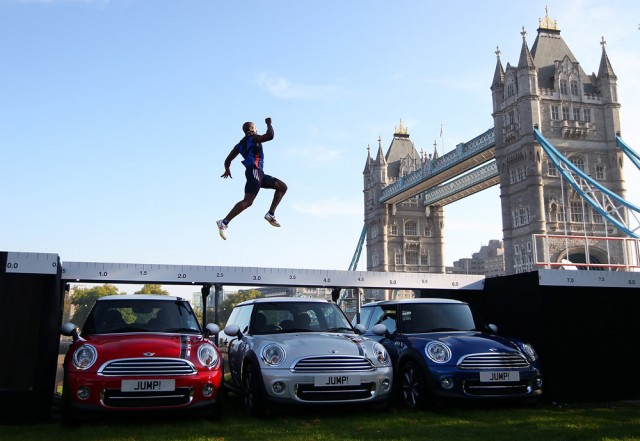 England long jump champion and London 2012 hopeful J.J. Jegede today succeeded in his attempt to jump over the roofs of three cars at the launch of the MINI London 2012 Edition Models.

This world-first took place at Potter’s Field, London. The three MINIs when lined up measured approximately six metres in length, a successful jump by a world-class athlete in optimum conditions is seven to eight metres, so Jegede, with no safety-net and under pressure to perform in extraordinary circumstances had very little margin for error.

In order to give Jegede the correct elevation for the jump, the run-up track and sand pit were raised to the height of the MINI’s roofs on specially-constructed structures positioned either side of the vehicles. Both track and pit were built to competition standard to ensure the best conditions for the attempt.

J.J. Jegede said: “When you watch athletics on TV it’s hard to really understand just how far professional athletes can jump. I’ve always wanted to demonstrate my ability in a fun way, so I jumped at the chance to perform an Evel Knievel-style display. It is my ultimate dream to compete at London 2012. I spend much of my spare time working with young people to get them involved in sport too, but I certainly advise any budding athletes not to try this one at home.”

British Olympian Steve Backley, who hosted the proceedings, added: “This has been a fantastic celebration of world-class talent, an extraordinary feat and a special treat for the fans. Having performed on the world stage myself I know how nerve-wracking it feels before a big performance, but in these extraordinary conditions I can’t imagine what J.J. was feeling.”

MINI UK, through its affiliation to London 2012 partner BMW, is proud to be an official partner to Team GB and the ParalympicsGB Team on their journey to the London 2012 Olympic and Paralympic Games. Acting as the biggest fan for both teams, MINI hopes its support will help to inspire extraordinary performances.

Inside, the most striking feature is the London skyline, beautifully etched across the width of the dashboard. Silhouetting some of London’s most iconic landmarks, including Tower Bridge, Battersea Power Station and the London Eye, the dashboard also displays the words “London 1 of 2012”. The headrests complement the theme with Union Jack piping and a London 2012 logo is stitched on the inner edge of both front seats.

The Leading Women of MINI