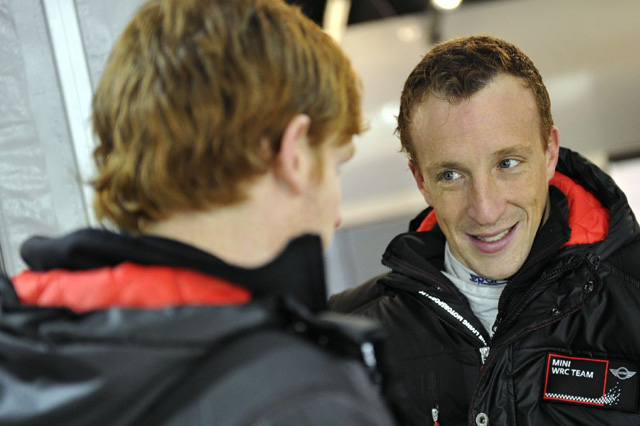 In a shock to both MINI WRC fans and Kris Meeke alike, MINI has decided not to run both of its team drivers in every race this coming 2012 season. Starting with Meeke’s absence from the season opener, the Monte Carlo Rally. Meeke’s seat in the second MINI team car will be filled by a local driver. With his multiple podium finishes last year, Dani Sordo will race every event this year. Meeke will continue to test cars when he is not racing competitively. As for Monte Carlo, sources at MINI and Prodrive are saying that if there were funds to enter a third car Meeke would be the one behind the wheel.

Meeke is an IRC champion and highly competitive driver who is still under contract with BMW through 2013, so it is doubtful that BMW MOTORSPORT is finished with him. A speculative possibility for the decision to bench Meeke for the Monte Carlo race and go with a driver with local experience is MINI wanting to find any advantage they can to win during re-entry into the rally event that put them on the map all those years ago. Apparently they think that Sardo and a local driver give them the best chance to bring home the checkered flag. BMW and Prodrive are keeping the true reason close to the vest at this time, all we know is that we’ll be seeing less of the Northern Irishman’s driving this year . We’re a bit disappointed to hear that as he has shown promise and has worked hard but if MINI takes home some wins because of this move it will be easier to swallow.

You can find more detail over at AutoSport.com

In positive news, however, this would point to MINI actually competing in 2012. Given their failure to file their paperwork in time, this was a bit up in the air.