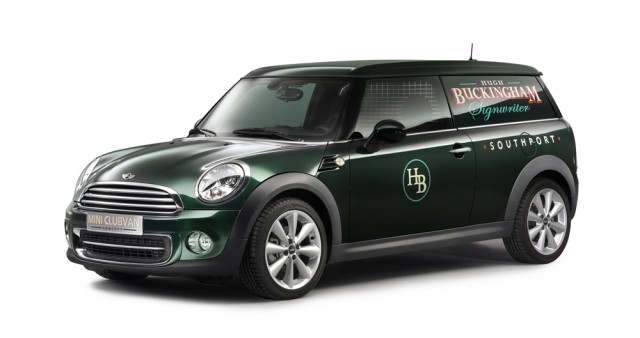 The MINI Clubman is already the most practical car in the range in terms of cargo space. Fold the back seats down and pile it in. Well MINI has taken it a step further with the new MINI Clubvan Concept. Featuring opaque rear windows, a rear seat delete, and a handy cargo cage, the Clubvan Concept will debut at the upcoming Geneva Auto Show. As concepts go, it’s hardly a stretch. Yet in execution, we dig it. Full details and gallery after the break.

[Official Release] Stand-out-from-the-crowd style can also be amazingly practical – and practicality can be surprisingly attractive. The MINI Clubvan Concept paves the way for an innovative vehicle concept without parallel in the premium small car segment. The MINI Clubman-based concept car, scheduled for its world premiere at the Geneva International Motor Show 2012, combines the driving fun for which MINI is renowned with increased load-carrying capability. The MINI experience will therefore find its way into new areas of life, the brand’s distinctive character gaining new popularity among target groups not previously on the MINI radar.

The closed-off load area behind the front seats and the opaque rear side windows of the new concept set it apart most strikingly from the MINI Clubman, the platform used as its base. The MINI Clubvan Concept uses its broader skill-set to open up new usage possibilities – both business and leisure. Where a business’s customers, product range or operating environment demand a particular style for its vehicles, this premium model can make the perfect delivery solution. 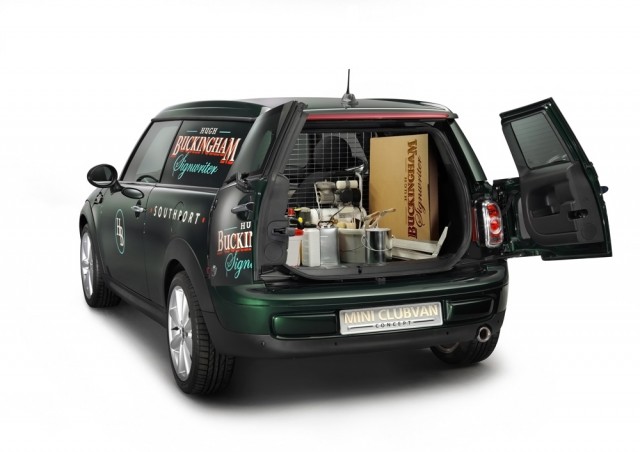 For example, a car in the mould of the MINI Clubvan Concept would fit excellently into the fleet of a fashion designer, art gallery owner or catering service. And its abilities as an all-rounder also tick the right boxes for a photographer with a stack of camera, tripod and lighting equipment to ferry around during the week – and bulky sports and leisure gear to pile on board at the weekend. The MINI Clubvan Concept pulls off the trick of blending enhanced practicality and a well-judged lifestyle focus with natural ease. This ability is based on the impressive adaptability that goes to the heart of the MINI brand’s heritage.

Calls for maximizing the load capacity of the classic Mini began as early as 1960, just a year after the car’s birth; and they were soon heeded. With its 10-centimeter-longer wheelbase (3.94 inches), separate load compartment and split rear doors, the Morris Mini Van was perfectly equipped for commercial use. It also provided the basis for the fully glazed, four-seat Morris Mini Traveller, one of the precursors of today’s successful MINI Clubman. And so, more than 50 years on, the MINI Clubvan Concept sees history repeating itself – albeit in a slightly different order. 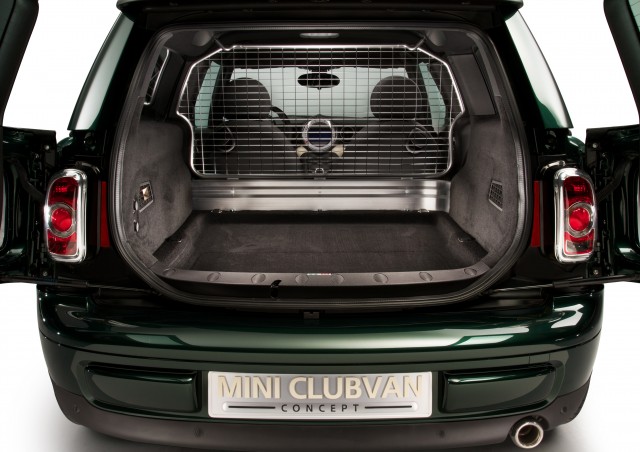 Limiting the car to two seats creates the capacity its owners will need on a day-to-day basis, as well as opening up a whole new world of customization potential. The load compartment of the MINI Clubvan Concept embodies the car’s fresh and rigorous interpretation of the principle used in the classic Mini – of providing the maximum amount of interior space on the smallest possible footprint. The load area reaches from the split rear doors right up to the partition grille behind the two seats. The totally level floor makes full use of the interior’s depth, and that allows the concept car’s load capacity to exceed the maximum achieved by the MINI Clubman.

Six attachment loops recessed into the load compartment floor use elasticized straps to hold items of varying lengths, heights and widths in place – without the risk of them sliding around. The partition grille, which is fixed securely to the car body, ensures that items stowed in the load compartment are kept safely away from the front seats. The lower section of the partition is made from solid aluminum, while the upper section consists of a silver-colored stainless steel honeycomb grating. The side walls and floor of the load compartment are trimmed in high-quality anthracite-colored cloth. The anthracite roof liner, meanwhile, extends along the full length of the interior. This uniform color scheme emphasizes the pure-bred, practicality-oriented character of the MINI Clubvan Concept. 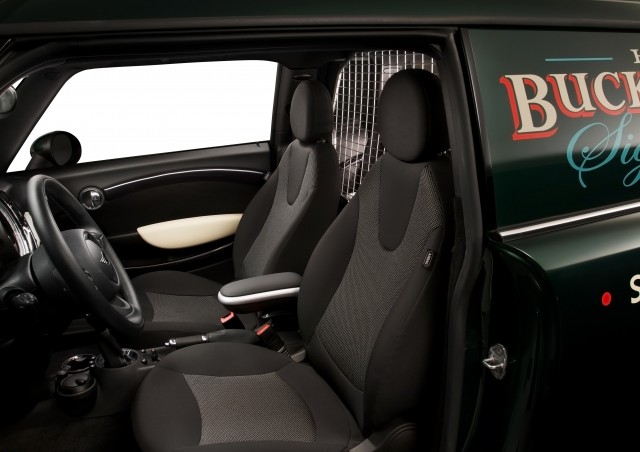 Like the MINI Clubman, the MINI Clubvan Concept is a five-door car with a twist. Two front doors for the driver and front passenger, two side-hinged doors at the rear and the rear-hinged Clubdoor on the right-hand side create comfortable access to the interior. The Clubdoor gives owners the option of loading or unloading smaller items from the side of the car as well as the rear.

The generous levels of space on board the concept car can be exploited in a variety of ways. Commercial users will be particularly pleased to discover the scope for configuring the load compartment to personal requirements. For example, tools and goods can be stored neatly and securely in made-to-measure drawers or shelving units. 12-volt plug sockets in the rear area of the load compartment provide additional practicality. 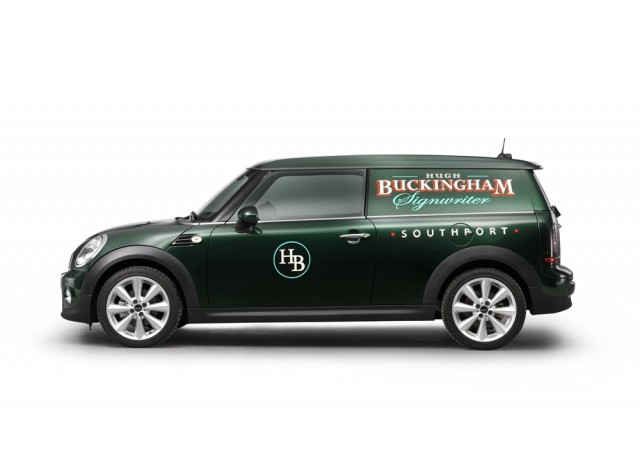 Impressive practicality and the brand’s time-honored style lend the MINI Clubvan Concept its unmistakable character. Sharing the exterior dimensions of the MINI Clubman and boasting cleverly increased storage capacity, the concept car is the first premium model in the small-car-based van segment. The exterior appearance of the MINI Clubvan Concept marks it out immediately as a MINI – and therefore as a premium product. The function-led design modifications have no impact on the car’s proportions and hallmark MINI design language, but they do give customers the opportunity to combine the demands of commercial use with an appreciation of individual style.

The MINI Clubvan Concept comes with British Racing Green exterior paintwork, which extends to the roof, C-pillars and exterior mirror caps. As is usual for vehicles charged with transportation tasks, the rear side windows of the MINI Clubvan Concept are opaque. Polycarbonate sections – their outer surfaces painted in the car’s body color – and heavily tinted glass for the rear doors make it difficult to see into the load compartment. 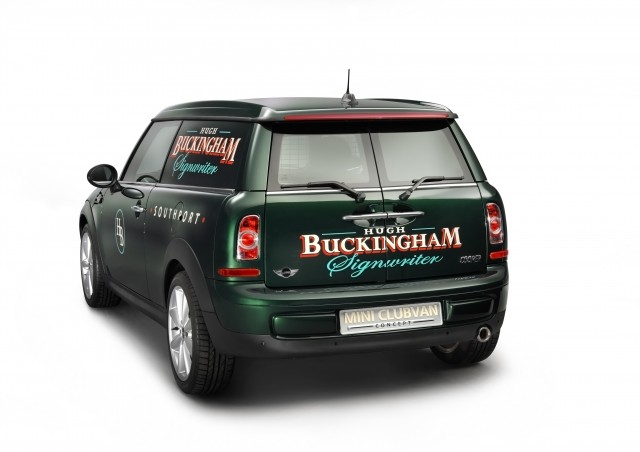 The unbroken paintwork along the car’s flanks offers extensive scope for individualization, which the MINI Clubvan Concept highlights to eye-catching effect. The sealed side windows bear the logo of a sign design company based in the MINI’s native Great Britain. The hand-applied graphics lend the vehicle a personal look. Indeed, the ultra-versatile MINI carries both its cargo and the company’s promotional message with a uniquely stylish verve. The MINI Clubvan Concept presented in Geneva lends this form of customization a piquant authenticity – on two fronts. The British company that has literally left its stamp on the MINI Clubvan Concept creates similar vehicle graphics for its customers. And the MINI Clubvan Concept showcases how these might look when applied to a MINI van.